Big Head Todd and the Squirrels

So much fun, you’ll bust out of your straightjacket.

This stupid product was posted by someone on my forum this morning.  No, it isn’t a giant sciurine Pez dispenser, it’s a damn squirrel feeder.  From the same glue sniffing geniuses who brought the world Squirrel Underpants, this is the latest attempt by humans to pretend that squirrels are stupider than they are.  In case you don’t have the heart to click on the link, here is the amazing product description from the Archie McPhee website:

If you get a Big Head Squirrel Feeder, you’ll be able to feed and humiliate squirrels at the same time. Hang this vinyl 5-1/2″ x 8″ Big Head Squirrel Feeder in front of a window or near a porch, fill it with something squirrels like to eat and when they stick their head up there, the squirrel looks like he has a hilariously huge head with a goofy smile. Keep a camera nearby, you’ll want to post a picture on Facebook. Perfect for birdwatchers, dads or anyone else who thinks squirrels should be taken down a peg or two. Has holes in the ears for hanging with string (not included).

First of all, how do you humiliate a squirrel?  To humiliate someone essentially means to humble them, and have you ever heard of a humble squirrel?  Remember that scene from the fantastic 1980’s movie “Pee Wee’s Big Adventure”, where Pee Wee dramatically crashes his bike in front of a bunch of kids, gets up, dusts himself off, and with a straight face proclaims, “I meant to do that.”  He stole that from the squirrels, because that’s been their mantra for years.  No matter how goofy, clumsy, or idiotic a squirrel may appear to be, it’s still damn proud of itself, and your amusement over his antics only make him even more bushy tailed.  So already, the first line of the product description is hopelessly misleading and inaccurate. 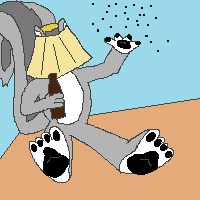 Not humiliated in the least.

As for the apparent humor over the unsuspecting squirrel now having a “huge head with a goofy smile”, take a look at the lead photo again.  Even if you can get over the fact that it looks more like a bad Photoshop job than a squirrel snacking out of a huge plastic head, does it really appear even remotely funny to you?  Maybe it does to you and your Squirrel Underpants you blew cash money to purchase (OK, I have those myself, but they were a GIFT, I swear).  If so, I apologize to you and the voices in your head.

The line about taking squirrels down a peg or two is quite laughable, however.  Again, this is merely one of those self-esteem tricks where someone convinces themselves they have conquered their enemy in their own mind, much to the surprise of the enemy itself who is paying absolutely no attention to you.  It’s like the infamous forum troll who thinks he has won because he got in the last word, refusing to accept the fact that the people he was trying to take down a peg or two just started ignoring him instead.

If all that misinformation hasn’t deterred you from buying the Big Head Squirrel Feeder, perhaps that last little item in the description will pull your hand out of your wallet and back into your nostrils where it originally was.

So there you have it.  If you want to plunk down $15 (plus shipping, handling, and tax) for this upside down Halloween pail, you better have yourself enough string lying around to tie it to, or else the only thing that will be humiliated in your backyard will be you.  But don’t worry, at least you’ll have something to wear over your head so nobody will recognize you in public….

Bored former 30-something who has nothing better to do with his life than draw cartoon squirrels.
View all posts by evilsquirrel13 →
This entry was posted in Squirrel Droppings and tagged archie mcphee, big head, humiliating, product, review, silly, squirrel, squirrel feeder. Bookmark the permalink.

3 Responses to Big Head Todd and the Squirrels