The Night Is Yours

have seen somewhat normal back when they first aired, they often seemed oddly dated and absurd when viewed through the eyes of today.  Of course, some commercials are so ridiculous that you can tell from the first time you see them on your TV that they’re turkeys.  So this week, we’re going to give the WABAC machine a little breather and take the Retro out of Retro TV Ad Tuesday.

Today’s spotlight ad is one you can currently see during your favorite and not-so-favorite shows.  It pinpoints the lengths to which companies will go to make their product seem like something you can’t live without, providing viewers with some of the most shallowest views on beauty since Barbie moved to Malibu.

Or MBRS came along…

The commercial we’ll focus on today is for the Gillette Fusion ProStyle Glider, a mouthful if there ever was one.  How does one market what is essentially a hedge trimmer for manhair?  Like this, apparently…

Funny that I explored questions that seemingly had no answer just the other day, because this ad starts off with one that has confounded men since Cleopatra told Marc Antony to kiss her asp….

What do women want?

Well, apparently Gillette has figured out the answer to the question nobody else has been able to tackle, and as it turns out, all women want is to quit having to pick hairs out from between their teeth when they’re with a guy.  A razor company has figured out how to satisfy women where Brad Pitt, Tom Cruise, and Carrot Top have apparently failed.  Imagine that…

And where did Gillette get their brilliant insight into the minds of the average woman’s desires?  From three supermodels, of course.  Duh!

Like, you better shave that thing if you want us to touch it!

So what do these women who are five thousand times hotter than any man with a Gillette weed wacker is ever going to date want in a man?  Normally, if you asked this question of a woman, it might take her half an hour of rattling off her turn ons and turn offs before she’d hit anything having to do with body hair.  But our man from Gillette wants to make sure the hairy dudes out there watching this commercial know they need to buy their trimmer, so he helps steer the answers with his apparent psychic knowledge of each girl’s folical likes.

Our first Queen of Vacuous is the lovely Kate…

Justin Verlander! Again? How many times have I told you to shave that back?

We are told Kate likes a man with a little hair on his chest.  After she is force fed that answer by Mr. Creepy Gillette Guy, she sensuously adds, “But definitely not on his back.” 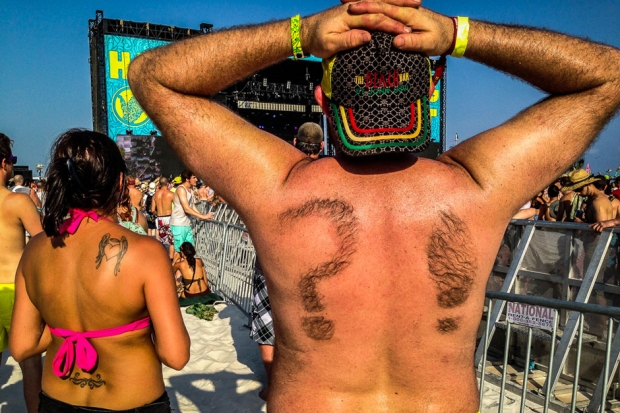 As far as I know, there is only one person who is capable of even looking at their back, and that’s Linda Blair.  Reaching back there’s kinda a pain as well.  There’s a reason we use bumpy walls to scratch our backs.  I don’t care how awesome this ProGlider styler is, I’m pretty sure I’m not going to be able to reach my back with it… and if I had someone to take care of that annoying backhair for me, I wouldn’t need the damn thing in the first place, now would I?

Well, so much for Kate and her impossible demands.  Let’s move along at the world’s most boring pool party and meet Hannah…

Sorry, I can’t keep my eyes off of your smooth, sexy beergut!

We’re told Hannah loves a guy with a smooth stomach to show off his sixpack.  Then we find out that Hannah is either mute, tongue-tied over the sexy abs of the best boy grip, or her salary demands for having a spoken part were too high for Gillette to afford.  All she does is smile and wink, complete with a cheesy “ding!” side effect.  Oh Hannah, that one batted eye said a thousand words, and they all convinced me to wack all the hair off of my sixpack.  It’s underneath all that belly flab dear, trust me! 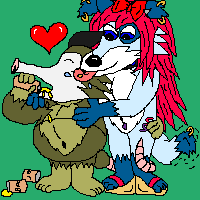 Now if you were able to make it through these first two doozy floozies without finding the nearest monastery, don’t put away that celibate rope just yet.  Because you haven’t met the lovely Genesis yet, and she’s dying to let you know how she wants to mutilate your manfur…

Do you think I should show more cleavage? it’s hairless cleavage, after all!

You might think Genesis was named after the book of the Bible where Cain killed Abel and God smote everyone but Noah and his boatload of animals.  But she’s much ,much crueler than that… we’re told she likes men that are completely hairless!

Now we know why she was named Genesis…

No humming little trimmer is going to do for Genesis’ dream man.  Nothing short of a painful wax job is going to turn this cold, hard bitch into a puddle of lovey goo.  And as if it wasn’t bad enough that she wants to strip a man of all that makes him a mammal, Mr. Gillette Guy just has to throw in, “…and she doesn’t think that’s weird.”

I got news for you, Revelations.  That’s not only weird and fucked up, but it’s downright cruel and inhumane.  As much as I’d hate to pass on your poofed up looks, there are other girls at this pool party who probably have much more reasonable hair demands, and I’m going to get Mr. Gillette here to read their minds for me so I know which ones are secretly lusting after squirrel meat tonight.  What, you’ve never been turned down by a guy before?  Get used to it, bitch.  We like our hair…

And so does MBRS.

I have a hairy chest, I have very hairy arms, my legs could probably be braided, and you’d have to come over and check my back yourself since I’m not a contortionist.  I have hair pretty much everywhere except at the very top of my head… and you know what, I’m damn happy with my furry self, and I do the squirrel species quite proud.  So I’m sorry Gillette, but I won’t be buying your slick little pocket de-maler.  If men were supposed to be hairless, all that testosterone us older guys are supposedly lacking wouldn’t be growing it all over us.

We here at The Nest would like to salute all the hairy animals out there who aren’t going to let some ditzy models filled with silicone and Nair manipulate us guys into becoming as smooth as a plush possum.  Beauty may be in the eye of the beholder, but sometimes the beholder needs to have their eye gouged out with an eyebrow trimmer.  We’re sure some desperately vain dumbfucks will make sure these lovely yet lethal ladies don’t go home alone tonight, but as for the rest of us, we’ll stick with the girls who love the feel of a full breast of hair…

Squirrel girls for the win!

Bored former 30-something who has nothing better to do with his life than draw cartoon squirrels.
View all posts by evilsquirrel13 →
This entry was posted in TV Commercials and tagged ad, advertising, back hair, chest hair, commercial, fusion, genesis rodriguez, gillette, hair, hannah simone, kate upton, models, proglide, shave, styler, trimmer, tv. Bookmark the permalink.

10 Responses to The Night Is Yours