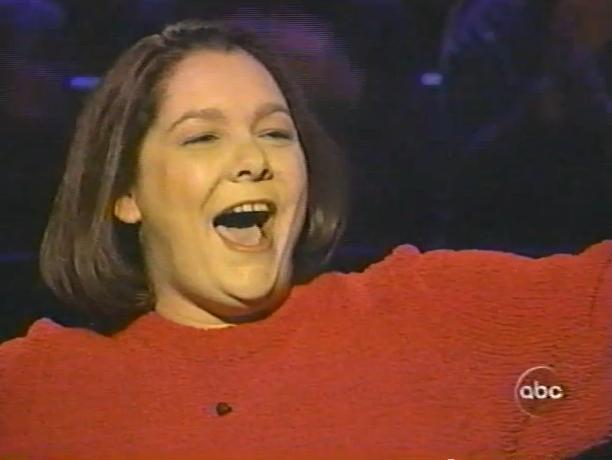 Welcome back to my Millionaire Story everybody! I’m much more entertaining than the stupid squirrel in Seat 9!

No doubt, you’ve spent the last seven days staring that those strange crescent shaped blobs at the bottom of your fingernails and wondered if we’d ever get to Friday so you could get your next veinful of digital crack that is The Nest’s perpetually ongoing Millionaire Journey.  Well, it’s finally time for Part XXVI in the series, so you’ll finally be able to get on with your life without all those constant distractions as your mind curiously wonders just what will The Journey’s newest star Amy Turner do next?  If you thought her defining moment was going to be taking 15 minutes debating what to do on that lunula question… well, Amy’s still got a trick or two up that red sleeve of hers that will no doubt make the fur on the back of your neck stand on end…

First, however, we must get through the third commercial break… and as it turns out, I don’t get to just be a spectator for this downtime to allow the skilled cosmetologists to redo the goopy mess Regis and Amy’s stage makeup had become thanks to that eternity under the bright lights….

Enter the warmup comedian Q and his armful of souvenir Who Wants To Be A Millionaire T-shirts….

He drapes one of the T-shirts over the fastest finger console of my Seat 10 neighbor Andrea Carla Michaels and tells her he’s going to do a little dance, and when he stops and points to her, she’s to launch the T-shirt over her shoulder into the crowd sitting behind us.  Q does his little dirty dance, points to Andrea, and she proceeds to sling the shirt backwards into the throng of audience members who fight to the death for it. 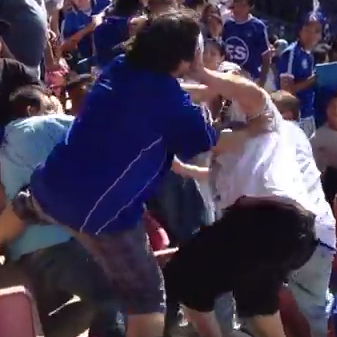 Fun for the whole family!

So now it’s my turn.  Q places another shirt over my monitor.  He nods to me since he doesn’t have time to repeat himself, and I nod back.  I know what to do.  I’m so pissed off at sitting here in this damn Bendy Side Out® Seat 9 all day long, that I’m gonna heave that shirt all the way into the back row!  Maybe onto the set of Good Morning America if I’m lucky.  Q does his crazy little jig, then points at me.  I swing my arm all the way back under me, and release that shirt like it was in a catapult!  I turn around to admire my work, and watch as two people in the second row back are clawing each others eyes out for the shirt…

We want a pitcher, not a belly itcher.

Yep, it’s been that kind of day for me….

After everyone on my side of the Ring has had the chance to blow out their rotator cuffs, and Amy and Regis are freshened up and prepped for their third post-break chat session, it’s time to roll tape and pick up where we left off.  Reege recaps the 17-part drama that unfolded during Amy’s $32,000 question, and mentions that the dishwasher is no longer an issue since she’ll be leaving with at least thirty-two large in her purse…

I even have enough to buy Bart a copy of Gray’s Anatomy!

Amy has yakked at length about wanting the dishwasher, and about how she loves to race her Austin Healey Sprite, and how she has a mid-life need for ink.  Now the only thing left to discuss is her Broadway aspirations…

Y’all didn’t forget about me, did you?

Amy’s done a lot of acting and singing in local versions of Broadway musicals.  One of those plays was “Gypsy”, where she played the role of Mama Rose and got to sing the song that is one of her internet screenname Ethel Merman’s signature tunes, “Everything’s Coming Up Roses.”

Amy rewrote the song just for Regis.  Would he like to hear it?

Of course he would.  And so do you, whether you want to or not….

“Everything’s Coming Up Regis!”  The crowd loved it.  Regis loved it.  We wannabe contestants politely applauded the reaction.

And Who Wants To Be A Millionaire was never the same afterwards.  This 13-show set from January 2001 that was chosen via audition rather than the customary phone game was set up to find people just like Amy… who could bring real personality to the show and not just trivia smarts.  Afterwards, Millionaire ran only two more sets of classic phone game shows before scrapping the process altogether in mid March and going on a huge cross country audition tour to round up more contestants like Amy for the shows that made up the final season and a half of the ABC primetime phenomenon.  And while the contestants certainly became more interesting, the winning slowed down to a crawl… trading off high stakes game show drama for more personal interest stories.  The debate still rages today whether this change was what ultimately killed off ABC’s golden goose of a hit series so soon after it was the talk of the nation… but it’s undeniable that the infamous shark was circling this megahit show at the time, and Amy may have been the one who jumped it for them. 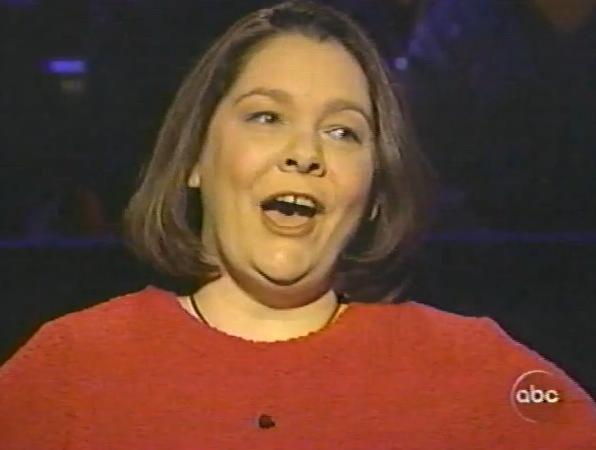 Oh, come on, ES! You just spent an entire post talking about one of my questions! Take it from Mama Rose, that’s show business!

And speaking of show business… let’s get on with it, shall we?

Amy doesn’t believe she has seen “Alien” since shortly after it came out.  I’m sure at some point I saw parts of the movie or one of its sequels when it was on HBO in the 80’s… yet despite the fact that it was spoofed in one of my favorite movies, and was a major inspiration behind one of my favorite video games, I have no earthly (or other-worldly) idea what the hell the name of the ship is… 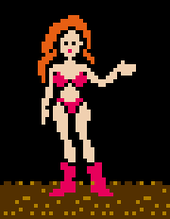 Will you find it in your heart to forgive me, Samus?

The only answer that’s even knocking in the back of my brain in Pequod.  Even though I know that was the name of the ship in “Moby Dick” , why couldn’t it have been borrowed for “Alien” as well?

I’ll keelhaul any spacelubber who dares rip off me ship’s good name!

And what do you know?  Amy’s leaning towards Pequod as well.

Regis reminds her it’s a free guess.  She has nothing to lose by going for the answer here since she’s already guaranteed the $32,000 she’s won, and evenly blindly she has a 1/4 chance of doubling that money and facing the $125,000 question.

Amazingly, despite all of the drama that’s unfolded over the last hour or so, we haven’t had a live action stoppage of tape since Ed initially mentioned he’d been a contestant on the show about seventy times already at the very opening.  But Amy’s gonna break that string…

Amy asks for clarification on the correct pronunciation of “Pequod.”  This was actually something that was mentioned to us contestants in the pre-practice briefing… we could request tape be stopped to get clarification on any aspect of the question, with pronunciation being specifically mentioned.  What this had to do with remembering a factoid Amy obviously didn’t recall in the first place, I have no idea… but at least in this instance, Amy isn’t wasting valuable air time by stalling and praying for a deus ex machina… 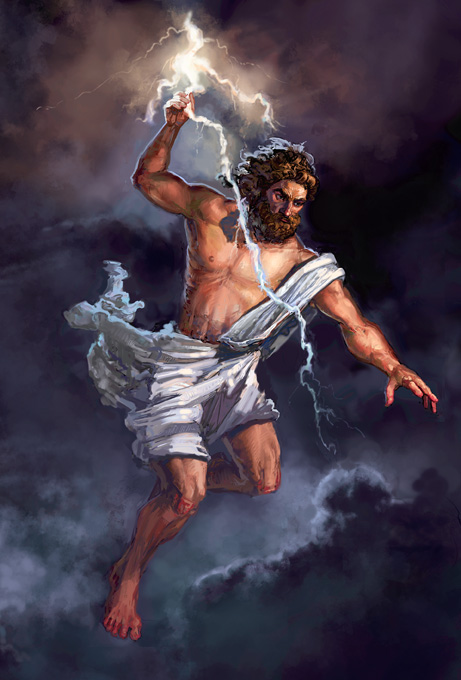 After you made the gods angry with all that singing!?!? Forget it, lady!

Once the men backstage satisfy Amy’s request with whatever in the hell the correct pronunciation of Ahab’s ship was, she finally bears down and answers the question…

LOL!!!! If you really believed that, then you don’t know Amy!

Of course, she merely continues her Marcel Marceau impression and stares intently at the question.  What else can she do?  Even allowing for the fact that it’s a free guess, she wants it to be an educated free guess, and she’s obviously not that sold on Pequod.  Realizing the coroner may come at any time to check her vitals, she starts verbalizing her thoughts.  She says the only one she is ruling out entirely is Dark Star, since she was sure Ripley’s ship had some kind of classical name… 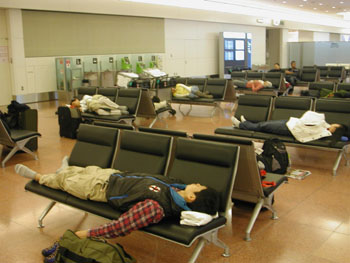 Amy: It’s so much easier when I’m sitting at home.

Imagine how much easier it is for us sitting around you, Amy!

Amy bemoans that they couldn’t ask something about a more recent movie she’s seen.  Yeah, Regis admits it’s a 21 year old movie, but a rather famous one at that.  Poor Regis’ mind is so shot by the experience he’s had to endure today, that he can’t even do simple fucking math anymore since 2001 minus 1979 does not equal 21. 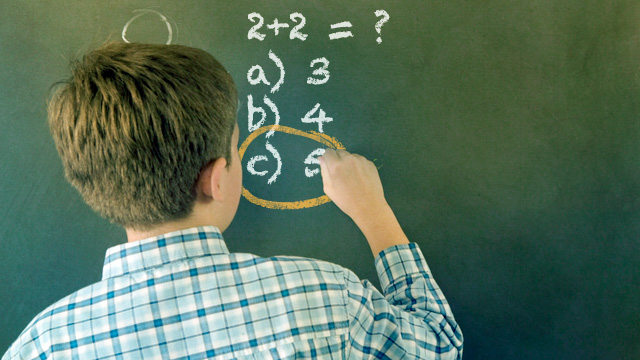 We’re all being turned into babbling dumbasses!

Apparently the realization of all the mind-numbing damage she has done finally dawns on Amy.  Almost immediately after Reege stops babbling about how old the movie is, Amy claps her hands and says, “C!  Pequod!  Final Answer!”

And the crowd goes wild!!!!

But alas, there is no joy in Athens, as the Mighty Amy has struck out….

The answer is A. Nostromo.

Awwwwww, dammit!!! I should’ve asked for clarification on the correct way to say “final answer!”

After what seemed like almost an hour long ordeal that was mainly tied up in just the final two of her eleven questions, Amy Turner’s run in the Hot Seat has finally come to an end.

And though I was quite hard on her in this series for the purposes of telling things as a finalist-in-waiting, especially once her indecisiveness got out of control during the lunula question and began to test my patience… make no mistake that I still like and respect Amy, and was very happy she won enough money to take care of the modest dreams she came to the studio with that morning.  Her story of a common person winning an uncommon amount of money is exactly what Who Wants To Be A Millionaire was all about… and as you can tell from how I covered it the past three weeks, it was certainly an interesting and fun ride as well…

Regis should’ve at least got some tongue for all his troubles.

I wonder if there’s still any tater tots left in the commissary?

I’ll be running up that hill….. next Friday!

24 Responses to Everything’s Coming Up Amyyyyyyyyy!!!!!