You know what today is, right?  Yep, it’s that extra special day you’ve been waiting all week for… Draliman’s birthday!  Oh, yes… and it’s also Friday!  That means you just might have been looking forward to your next exciting taste spoon full of my Millionaire Journey!  Sure, you may not live long enough to see the end of it, but you’re going to enjoy each little morsel I feed you every Friday, or it’s going back in the refirgerator and you’ll have it again for dinner tomorrow! 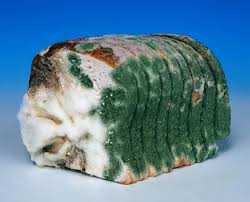 It’s only going to get better with age!

Our story left off with us bidding adieu to the inimitable Amy Turner as she drove off into the sunset in her 1959 Austin Healey Sprite with a check for $32,000 that Regis Phiblin personally endorsed.  Regis’ post mortem on Amy’s run is much shorter and more genuine than the one he was forced to give after the glowing potato fiasco.  He explains what we all knew (Dehrrr), that the Pequod was from Moby Dick… and doesn’t mention that apparently means no other type of vehicular craft ever made could have possibly ever been also given the name Pequod without being sued by Herman Melville’s heirs.

Or kicked in the crotch with a peg leg.

It’s good to go until the slobber runs out.

And so now it’s time to find the next Hot Seat occupant and play another Fastest Finger question!  The associate producers, who frequently stopped by to brief us wannabes during any break in taping on anything of importance they thought we should know, informed us that if we were to win this FF question, we were to go up to greet Regis and wait there rather than proceed to the Hot Seat, as they would be immediately going to the next commercial break.  Lovely… Amy’s hemming and hawing over spaceships took up so much of this taping segment, that we’re going to burn another break before the next winner can even be seated!

Barring anything foreseen, this is kinda looking like this will be the final chance at the Big Chair…

Thank you ever so much signpost up ahead…

Regis mentions that there are still nine people who are “waiting to prove just how smart they are.”  The lights go down, the drum roll begins, and Regis reads the next Fastest Finger question……

Put these movies in order of their first theatrical release, starting with the earliest. 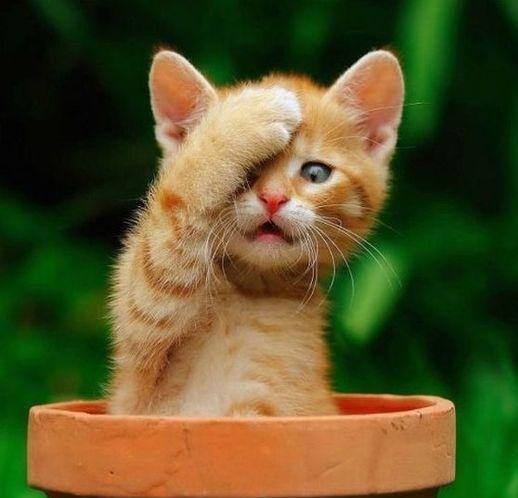 Oh, dear…. this isn’t really what I wanted.

I watched a lot of movies in the 80’s, though there are still some big time classics from even that decade you’d be shocked to know I’ve never seen before.  Outside of that, my movie knowledge is pretty spotty… it’s certainly not one of my strong points, and many a movie “put in order” question just like this had done me in before on the phone qualifying game.  As I sit, and wait, and dread what choices are going to pop up… all I can do is hope that I’m going to see four movies I can at least identify a time frame for…

And here come the movies…..

A. Three Men and a Baby
B. Men of Honor
C. Men in Black
D. All the President’s Men

OK, at least unlike that first disastrous Fastest Finger question, I could come into this one without any preconceived notions of what the answer might be.  So let’s take a look into the fascinating mental process I used to come up with my answer…..

Prepare to go where no man has ever gone, or wanted to go, before. 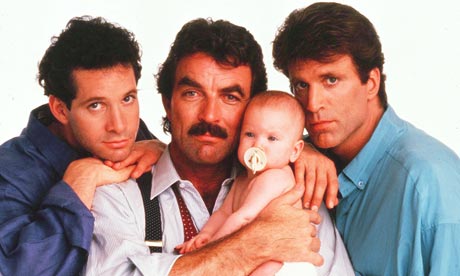 A family like this is totally normal these days.

OK, I can definitely place this one in the late 80’s.  I know Steve Guttenberg’s one of the “Men” in this film, and he seemed to disappear off the face of the earth in the 90’s despite being in just about every 80’s comedy film…

“Men of Honor”….. um… seriously, WTF is this movie?  Well, shit… maybe I can pinpoint all of the others and then throw this one into the biggest chronological gap…

“Men in Black”… whew!  Back on solid ground!

You’re going to forget you ever experienced this frightening mental process. It’s for your own good.

OK, that just leaves “All the President’s Men”… good!  I know this one too!

That’s the movie with Clint Eastwood where they showed him running along the Presidential motorcade on the poster.  I’m thinking that was early 90’s, so it fits nicely in between “Three Men and a Baby” and “Men in Black.”

So what do I do with “Men of Honor”?  Seems to me that with a late 80’s, early 90’s, and late 90’s movie already placed in the timeline… and since this is January 2001, the most likely scenario is that “Honor” is the oldest movie in the bunch… which would also explain why I’ve never heard of it before.  I mean, I may not watch a lot of movies, but like everyone else, I do get bombarded with the ads when they’re released…

This seems so quaint now, but in 1996, it blew us out of our living room sofas…

OK, all of these visual images raced through my head in literally just a few seconds.  I’ve still got time to nail this thing, so I work my magic with the pesky buttons and whip in B-A-D-C, hammer the enter button, then check the LCD display to happily see this:

So now I get to sit back and wait for the 20 seconds to expire so Regis can give us the answer and announce the winner.  I’m feeling pretty good about both my answer and how fast I was able to get it in the computer…

Time’s up!  Let’s see that answer in the correct order starting with the earliest, it’s….

D. All the President’s Men

A. Three Men and a Baby
C. Men in Black
B. Men of Honor

I really can’t do anything but stare in utter disbelief after Regis gives the correct answer.  I thought I had managed to outsmart a question in one of my weak areas, only to have it come back and bite me in my big, fluffy ass.

Or maybe I got bitten by a big, fluffy ass…

Of course, those of you who are much smarter than I am knew where I went wrong even before I got to the part where I learned I’m a cinematic idiot myself…

First of all, my lack of knowledge of “Men of Honor” had nothing to do with it being some film old enough to have needed an organist in the theater to accompany it.  It was actually so new, that I could’ve probably caught a current screening of it after the taping if I really wanted to…

Your Honor, we’re going to re-enact this Fastest Finger question with the defendant under the exact same conditions he had to endure in the studio that day in hopes of getting a verdict of temporary dumbassery.

“Men of Honor” was released to US theaters on November 10, 2000… barely even two months prior to the moment I had to figure out a question involving it.  I’m assuming this movie actually had a promotional campaign… but how I managed to be oblivious to it still confounds me to this day.  Even worse, since it had yet to be released on VHS and DVD yet, that meant that when it finally did become available to own at home, I had to look at that damn cover for the movie every time I went to work since my area was adjacent to Electronics and the home movie islander… and seeing Robert DeNiro and Cuba Gooding, Jr. together still haunts me to this day…

But without a doubt, my most hilarious mistake was confusing the classic movie “All the President’s Men” with the 1993 thriller “In the Line of Fire.” 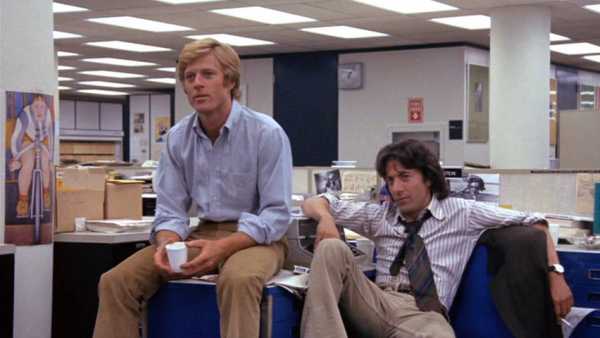 The top secret Millionaire Papers have revealed that I am officially a dumbass.

“All the President’s Men” came out in April 1976, and I hadn’t even turned a full year old yet.  While I was familiar with the historical story behind the movie thanks to history class (I’ll pause while the old fogies out there who lived through this era roll their eyes at me), the movie itself was a complete unknown to me.  I just didn’t realize it was the “long lost classic” I assumed “Honor” was, because when I saw that title on the screen, I just couldn’t get….

…out of my mind.  Not exactly the kind of President’s men they were looking for…

Well, enough grousing about how I’ve now managed to fuck up TWO whole Fastest Finger questions with my puny ass brain, let’s just hope and pray that everyone else also got this one wrong so I can have another crack at proving I have more grey matter than the average dead possum…

We have a winner, and it’s the only other dude on my side of the Ring… Kevin O’Neill! 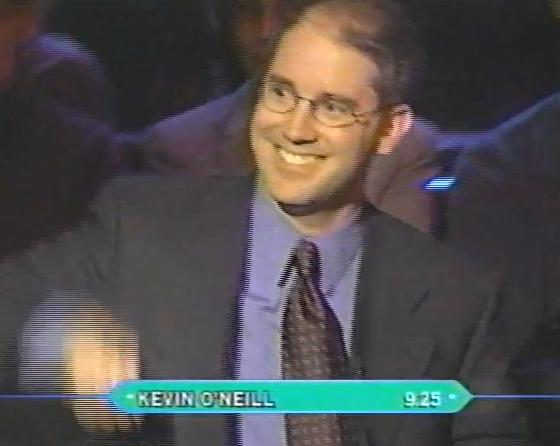 Oy, look at that time!  I couldn’t see it in the studio that day, but when I watched the show air a couple weeks later and saw that the winning time was over nine seconds, I couldn’t help but wonder if maybe I’d have sorted this question out had I taken a few seconds to actually let the titles before me settle into my skull.  Probably not, but like Watergate, it’s ancient history now and we can’t do anything but learn from the mistakes…

You’re still A-OK with me, ES! I never cared for that movie either…

And the fourth taping segment is also ancient history….

Any chance we can make this a two hour show?

There’s still time… but will Kevin O’Neill give me another chance at redemption?

Y’know, Regis, I think I’m gonna just hoist myself up into the Hot Seat and imitate Amy the rest of the show!

Bored former 30-something who has nothing better to do with his life than draw cartoon squirrels.
View all posts by evilsquirrel13 →
This entry was posted in Millionaire Journey and tagged 2001, disaster, fastest finger, game show, men, millionaire, movies, question, regis, wwtbam. Bookmark the permalink.

23 Responses to Men On Film