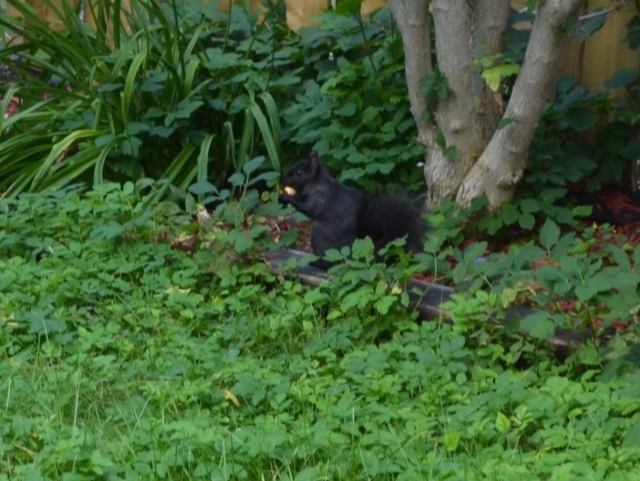 Once you go black, you never go back.

This week’s Saturday Squirrel comes to us from longtime Nest follower Jennifer at the blog Jenn’s Midlife Crisis.  Jenn is an avid photographer who often shows off her work on her blog, and she was kind enough to get some

pictures of one of the awesome ebony sciurines in her neighborhood just for The Nest!  Above is my favorite picture from the set she sent for me to use on my much-beloved Saturday feature… and that dark furred little guy is just too cute sitting there eating his nut!  I have never seen a black squirrel in person before, which is a shame since they are such beautiful creatures!

Black squirrels are actually a genetic subset of the common grey squirrels you see on my blog all the time.  They are most commonly found in the northern U.S. and especially in Canada, where Jenn lives.  I’ve only featured a black squirrel once before, which one of my co-workers took a photo of on a trip to Canada and which inspired one of the few paintings I have done. 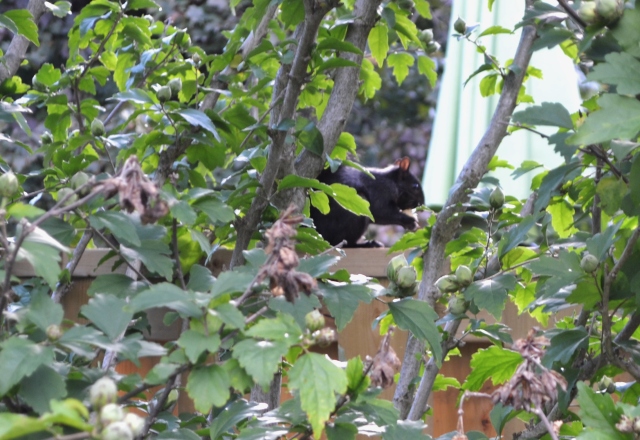 I don’t have to pose in the nude, do I? (This photo also taken by Jenn)

Thank you so much Jennifer for allowing me to feature these blacked furred cuties on an episode of Saturday Squirrel!  If you have a camera and know of a squirrel who needs a little SS exposure, feel free to send your photos to me, and both your squirrel and your blog will get a Saturday shoutout!

Have a great October weekend, and smile if a black squirrel crosses your path this Halloween!

Bored former 30-something who has nothing better to do with his life than draw cartoon squirrels.
View all posts by evilsquirrel13 →
This entry was posted in Saturday Squirrel and tagged adorable, black, black squirrel, canada, cute, ebony, photo, photography, squirrel. Bookmark the permalink.