Don’t try this with your squirrels at home.

You have a product that you believe is the best of its kind on the market.  That’s great!  Too bad it’s getting slaughtered in the stores by the big brand name competitor whose popularity with the masses keeps it in the carts of shoppers while your wonder product gets shipped to the clearance aisle.  Nobody wants to even try what you have to offer because Brand X has built up years and years of loyalty with customers to its ®egistered trademarked brand name.  What can a small fish in the big pond of consumerism do to steal some market share from the big boys? 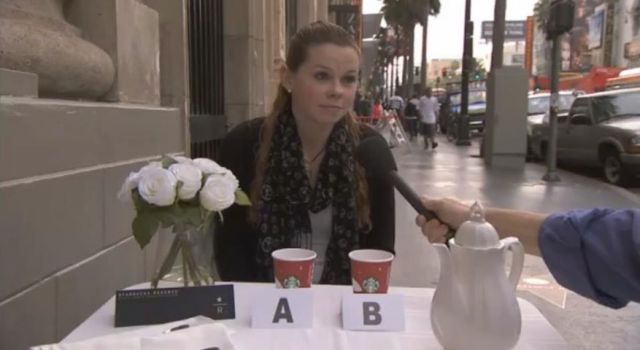 I have no idea what the fuck I’m drinking.

Some genius marketing guy eventually came up with the idea for the blind taste test.  Have random people try both your product and that of your fiercest rival, only conceal the brand identities and have your guinea pig come to the startling realization that they like what you have to offer a lot better than the brand that made somebody else a billionaire.  What a brilliant concept!  What could possibly go wrong?

Must be from the South…

While this secretive one on one product testing is generally the domain of the food and beverage industry, occasionally other products use this formula to try and break through the glass ceiling of blind brand loyalty.  Perhaps one of the most bizarre examples of this technique was pulled off by Denorex dandruff shampoo in the early 80’s.  While the Denorex narrator didn’t have their subjects drink the shampoo, they wouldn’t have looked any more ridiculous doing that than they actually appeared in these ads…

Randy Zimnowski: Mom!  I finally hit the big time!  I’m the star of a television commercial!

Mrs. Zimnowski:  Son.  I’ve got to run.  Your father and I need to hurry out and have our names legally changed.  As well as our phone number.  And the will….

Thirty years ago, Denorex took on its biggest competitors Head & Shoulders and Selsun Blue by embarrassing the hell out of unsuspecting men on national television.  It’s awkward enough to admit to the world that you have a dandruff problem.  To compound that uncomfortable feeling by having half of your hair lathered up by one colorful shampoo, and the other half with an even gayer color shampoo… you either have to possess some sperm whale sized balls or be really desperate for money.

What the hell was I thinking when I agreed to do this!?!? I look like a damn hermaphrodite peg in The Game of Life!

Randy is undaunted by the fact that he may have to eat his man card for lunch once this travesty airs down at the sports bar his friends hang out in.  He decides right away that the pink shampoo on the left side of his head must be the superior formula.  While most of us would wait until we’d actually rinsed the shampoo out of our hair and looked at the results in the mirror to decide if Vidal Sassoon looked good that day or not, Randy’s already made his decision in the Great Dandruff Shampoo showdown of 1982 by declaring that the goop on his left must be better because it TINGLES!

Nevermind that the stress of being the center of this horrific experiment in advertising science may just be giving him a mild stroke, or perhaps the stylist who was in charge of the Denorex side of Randy’s head may have accidentally infested him with lice.  He’s positive that because the port side of his head is giving him the happies, that must mean it’s working to obliterate those nasty flakes that have perpetually kept him from getting a date.  He’ll be a hot commodity with the babes now that he’s flake free… not to mention he’s picked up the perfect trick to make the ladies feel that pleasurable tingle on just the left side of their….. um…..

Thanks MBRS for bailing me out there!

Once Randy finds out his old standby Selsun Blue is sadly tingle free, Denorex goes into the complicated science behind why it makes your hair feel like you were taking a leak on an electric fence. 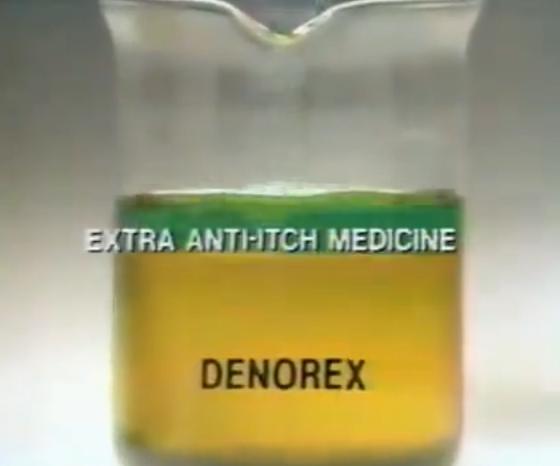 Scientific fact: Extra anti-itch medicine is incredibly buoyant… but only if it’s green or pink.

Actually the narrator, who sounds more like he’s describing war footage from the Western Front in an old newsreel rather than doing the play by play of a dandruff shampoo commercial, doesn’t mention why Denorex tingles.  All he says is that Denorex has an “extra anti-itch medicine” that “many dermatologists recommend.”  Maybe Denorex’s tingling formula is some kind of closely guarded industry secret, or perhaps Randy was just having an acid flashback… but only on the left side of his brain.

My left buttcheek seems to be tingling… or maybe it’s just gone numb.

One thing’s for certain…. Denorex is not candy, it’s very clearly medicine.  And like every other over the counter pharmaceutical ever advertised on daytime TV, it came with that famous four word disclaimer…

Use only as directed… or you may end up with gnarly 80’s hair!

And of course, we were directed in this commercial to use the product only on the left side of our scalps.  Applying Denorex to the right side of your head may result in hair loss, blurry vision, dry mouth, bleeding ulcers, diarrhea, liver failure, genital warts, appearing in a bad comic strip, and even death.  Always consult a your doctor and a lawyer before using Denorex. 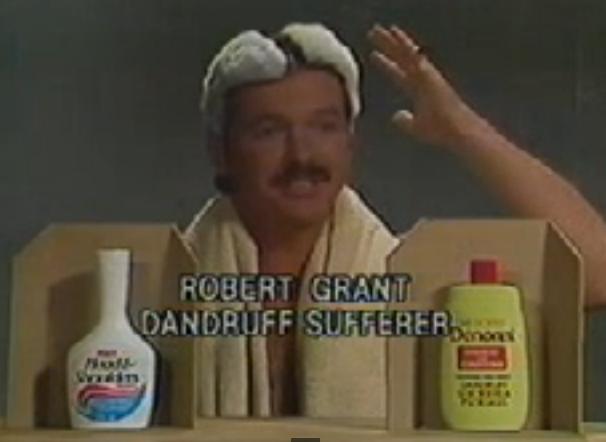 You might also want to consult your agent before agreeing to take the Denorex Challenge.

Into everyone’s life, a little snow must fall.  But thanks to that miracle of modern medicine Denorex, you can have exactly one half of your hair be completely flake free!  For making advertising history one hemisphere at a time, The Nest would like to salute the makers of Denorex as well as the courageous actors who were willing to brave looking like a two-faced fool for just a cheap tingle.  Thanks for teaching us that shampoo isn’t working if it doesn’t feel like a billion crabs are running through your hair, and that guys don’t have to swipe their gal’s Herbal Essences to have an O moment in the shower…

But at least you can use Herbal Essences on your whole head…… Ohhhhh, YESSSSS!!!!

Bored former 30-something who has nothing better to do with his life than draw cartoon squirrels.
View all posts by evilsquirrel13 →
This entry was posted in TV Commercials and tagged 80s, advertising, commercial, dandruff, denorex, funny, half, itch, medicine, scalp, shampoo, split, stupid. Bookmark the permalink.

23 Responses to Feel The Tingle