To The Squirrel I Love

To my beloved Agnes,

I still remember every little detail about the instant in time when I first glanced upon your sciurine splendor.  You didn’t see me above you, my dear, but there was no way I could miss the furry goddess whose sparkly black eyes and bristly, fuzzy tail was making my tiny heart go all nutty.  You were the portrait of an exotic arboreal princess.  I didn’t have the courage to approach you… at least not upon my first sighting of your ravishing beauty.  But from that moment on, it was my only mission in life to make you mine.

The next day, I stealthily perched above the branch on which you were sunning your exquisite physique.  I watched in awe as you delicately and sensually groomed your flowing locks of fur.  I thought of jumping down there to help you pick for fleas and ticks that had the audacity to defile your siren’s skin… but the moment was still too soon for this shy squirrel to act.  You were still only within the realm of my dreams… but the object of my desire would not elude me for much longer…

I kept returning day after day to the grounds upon which you would frolic, the trees in which you would leap about, the birdfeeder where you would eat.  Had you known how quietly and persistently I had followed you like a vampire would an unsuspecting virgin, you would have no doubt considered me to be some creepy stalker.  But no, I was just a hunter in the game of love, and you my dear Agnes, were the only prey I was after.

Finally, I saw my moment to strike.  My hunger for you could no longer be hidden in the lurking shadows… I emerged from my shell and introduced myself to the most beautiful squirrel I had ever laid my beady eyes on…

My heart sank when you responded to my genuine affections for you by dashing away.  I knew, deep inside my mangy soul, that I was not a worthy enough squirrel to have such an adorable little furball as you to call my own… but my appetite for you, my lovely Agnes, was not going to be properly sated by simple rejection….

So I gave pursuit of my dream squirrel.  The best things in life are worth chasing, and as it turned out, you very much enjoyed being chased.  You played so incredibly hard to get, that there were times I almost felt like giving up… but the reward of the treasure at the end of the prism’s rainbow was more than worth all of the physical and emotional pain I had to endure to get there… and at last, I had caught you in my amorous trap! 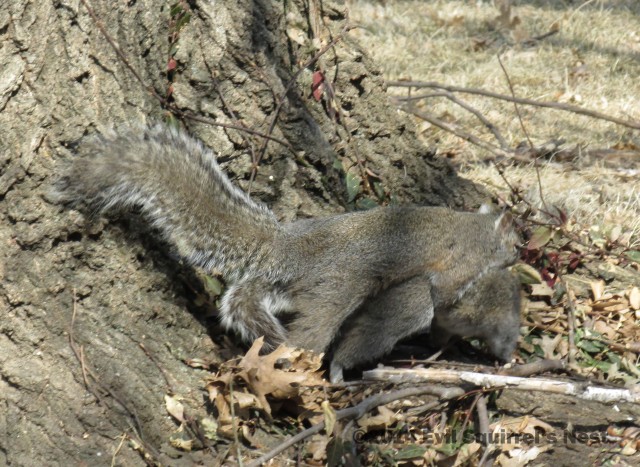 When I finally broke down your walls and was able to look into your shimmering ebony eyes, I could see that you were just as enraptured with me as I had long been for you.  I had finally won the heart of the only squirrel I have ever loved.  From that day on, we were two souls who had now become one.

There was no stopping us now, Agnes.  All of the energy we had wasted in the silly courtship game was now being put to better use experiencing the carnal benefits that come with being an animal.  Our passion for each other could not be tamed.  Our furry whoopie went on day and night, anywhere, any way, any time.  We drove the dog fucking nuts… 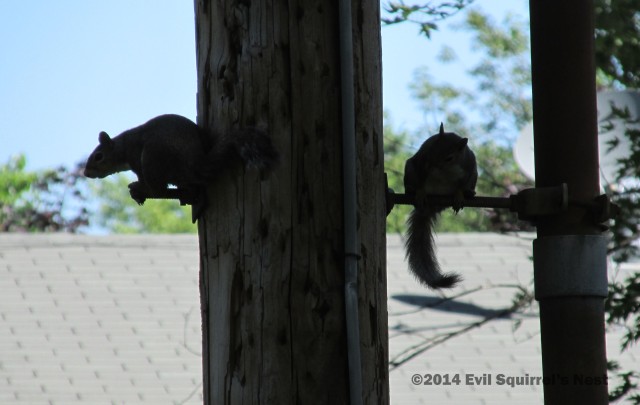 Sure, we’ve had our ups and downs over the years, my love.  You’ve kicked me out of the nest several times after a nasty skirmish where our angry jabbering would wake up the whole backyard.  But every time you ostracized me, I realized in my loneliness just how much you meant to me.  My stubbornness was no match for the fact that I could never go on without you.  I always came back, and I always apologized.  I’d rather lose face than lose the only critter who completes me. 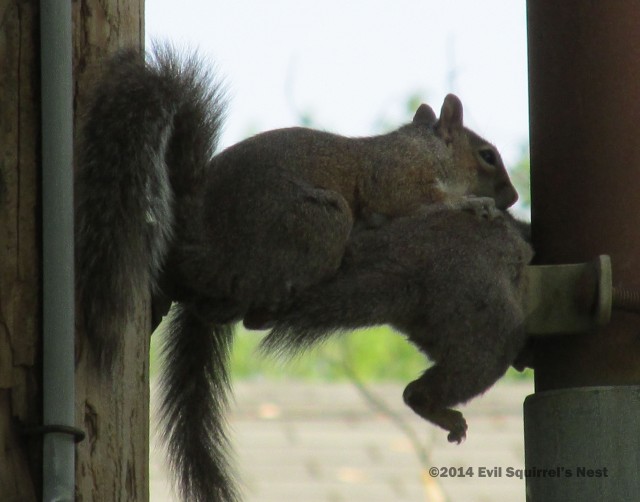 And so, Agnes, on this occasion, our 20th anniversary together, I wrote this letter to let you know in indelible ink just how much you have always meant to me.  I covet you more than I do all of the acorns on earth, and I would cut off my bushy tail if it was the only way to ensure you happiness.  Thank you for making my life worth living, and for being the best partner any squirrel could ever ask for.

Agnes, I love you more than any silly love letter could ever say.

What is this, you’re saying to yourself?  Have I gone truly mad?  No… well, not any more than usual.  This is my official entry in Juliette’s Love Letter Writing Contest on her Vampire Maman blog!  I’ve never even had a real love before, and I was still able to come up with this schlock above… so you can certainly write up your own love letter for this fun little game!  There’s still two weeks to enter!  Just remember to include the words “vampire”, “prism”, and “portrait” in your letter (Which I’d forgotten to do until I went to grab the link!)…

Vampire Possum says, “Do it!”

Bored former 30-something who has nothing better to do with his life than draw cartoon squirrels.
View all posts by evilsquirrel13 →
This entry was posted in Squirrel Droppings and tagged adorable, contest, cute, funny, humor, love, love letter, nature, photos, squirrel, squirrels, sweet, vampire. Bookmark the permalink.

38 Responses to To The Squirrel I Love