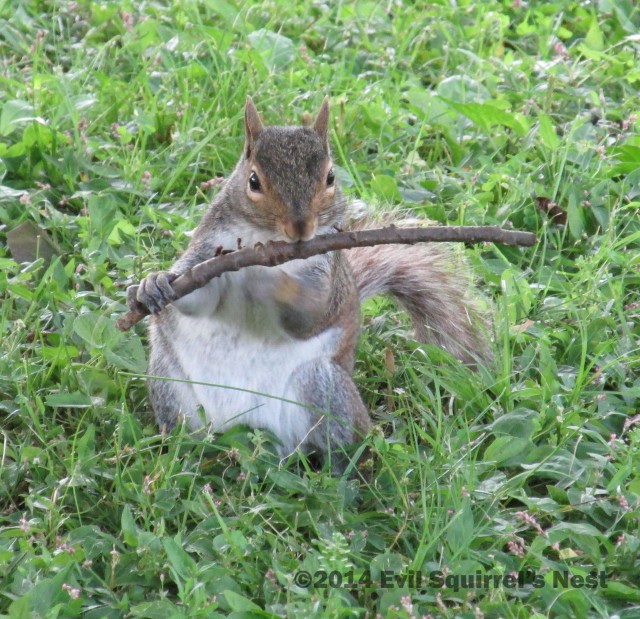 Oh look, I made an entry! Now if only I had a possum to duel with…

The timer has sounded and the four weeks everyone had to submit a creation for my Second Annual Contest of Whatever has officially come to a close.  Only nine brave souls were able to get in under the wire this year, down from last year’s field of 13.  But that’s OK… better odds for those of you did get to play along, right? 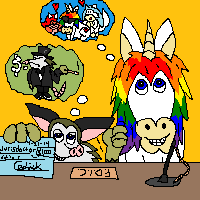 Is check kiting considered an activity?

The rules asked for a creation of some form that included at least two species of animals, and there had to be some form of gaming activity going on.  Using the same deck of cards I called upon to determine last year’s order and random winner, I will now draw the order this year’s nine entries will be listed in…..

Jackie submitted a comic featuring Sam the dog being challenged to a game of hide and seek by the evil cats Notwen and Pouncer.  Everyone thinks they’ve won as the game approaches a stalemate, but perhaps the real winner was the little mousie… 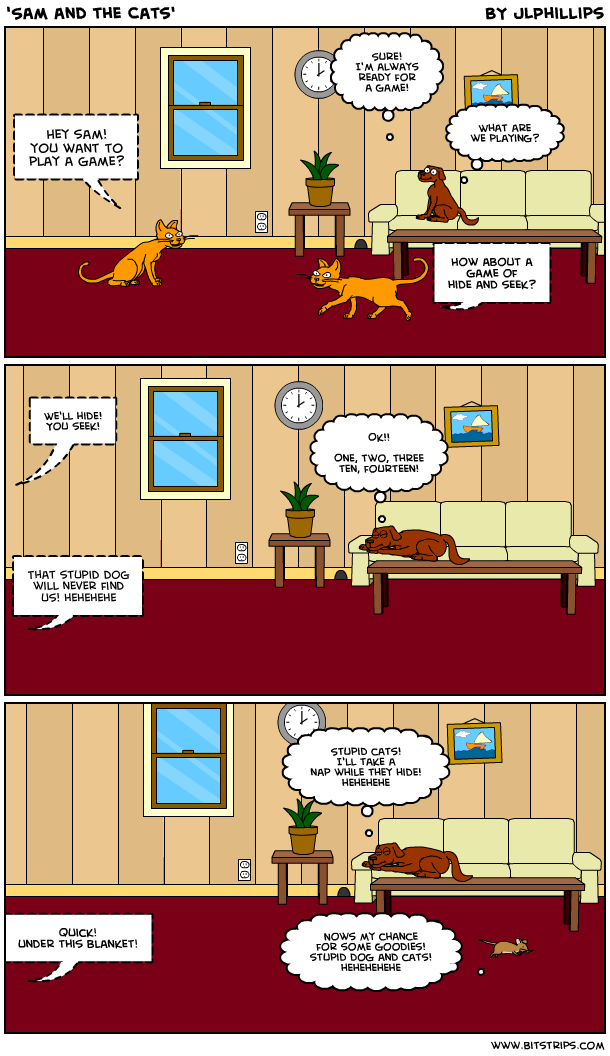 A game of wits…. or witlessness!

Easy challenged a few of his mousy friends to a friendly game of poker.  There may have been a little cheatin’ going on though.  Be sure to click on the link at the bottom to see the full story since it was a reblog… 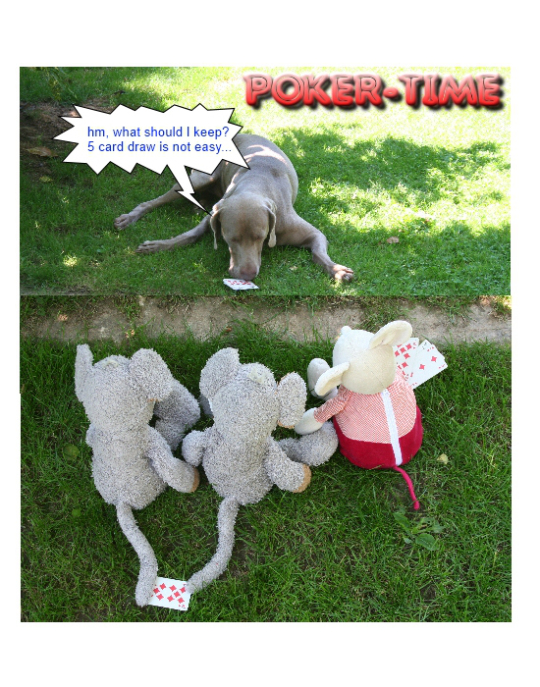 If cowboys had tails, there’d have been more cheating in the Wild West…

Grandma Lin introduced us to the fascinating winter game of Fox and Geese… ironically without any actual fox or geese playing along.  The rules are totally absurd, but the drawing is totally cute! 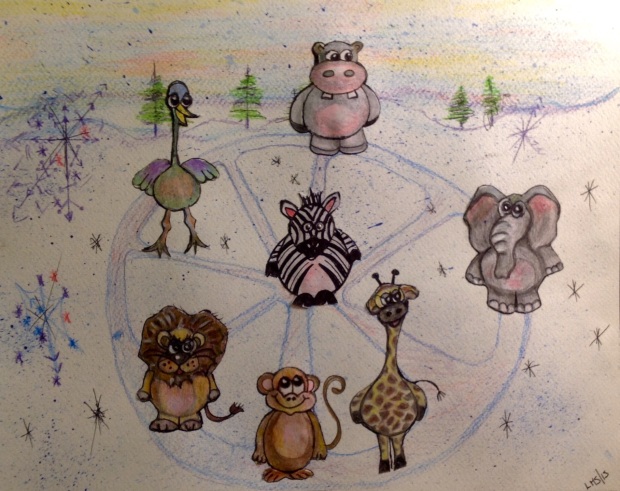 Jungle animals in the snow… you gotta love it!

Ally gave us the adventure of Fred the monkey and Sandrine the bear as they partook of a fun afternoon of games while Grandpa Aloha watched in the background.  A fun tale with live action stuffies! 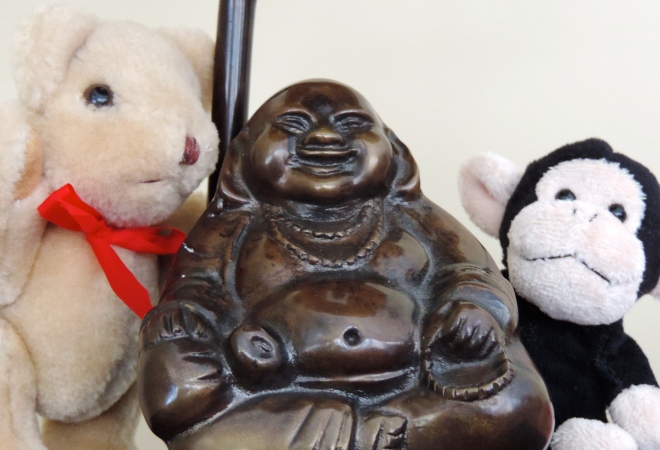 The selfie with the Buddha totally made my day!

The Nest’s favorite Vampire Maman came up with one of her fantastic tales involving a young man who stumbles upon a strange dice/drinking game being played in the forest by a menagerie of creatures. 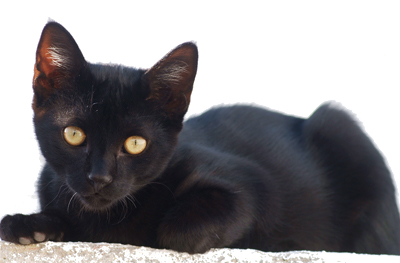 This is Vlad’s cat. What, you would expect Dracula to have a tabby?

Jenn and her Little Guy teamed up at the last minute to present us with a photo display of “Behind the Scenes of Angry Birds”: 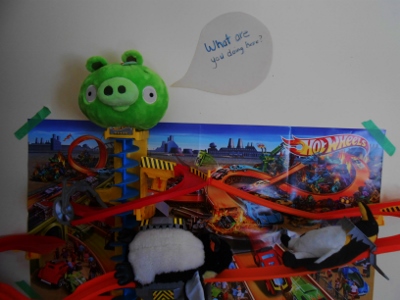 Poker night with the critters!  Make sure to read Merb’s story that goes along with the picture!

The horse is bluffing.

Aunt Sharon pitted Croc vs. Rainbow Donkey in a fun game of Super Mario All Stars!  Many other cute critters from her collection can be seen watching the action, with dibs on taking on the winner!

Finally, we have Drali’s entry featuring some of his world famous Dralidoodles depicting the Worldwide Woodland Games!  The teams are all ready to compete!  Guess which one never makes it to the medal stand…

No spoilers here! Go check it out yourself!

And there you have it, this year’s nine challengers in the Second Annual Contest of Whatever.  The only thing you can be guaranteed of is that there will not be a repeat winner since neither of last year’s victors entered.  Which two of these nine will win a prize from my Cafepress shop?

Find out Tuesday when I reveal the results!!!

Bored former 30-something who has nothing better to do with his life than draw cartoon squirrels.
View all posts by evilsquirrel13 →
This entry was posted in Squirrel Droppings and tagged contest, entries, fun, nominees, whatever. Bookmark the permalink.

14 Responses to The Magnificent Nine