Over the past few days, Marilyn has been participating in a photo challenge on her Serendipity blog… “Five Photos, Five Stories,” which she was asked to participate in by the first name in photo prompts, Cee’s Photography Blog.  I decided to give it a shot this week as an excuse to show off a few of my non-squirrel photos that might otherwise not end up on my blog.  The rules are simple…

1) Post a photo (or more!)  each day for five consecutive days.

2) Attach a story to the photo. It can be fiction, non-fiction, poetry, or nothing more than a short paragraph. It’s entirely up to you.

3) Nominate another blogger to carry on the challenge. Your nominee is free to accept or decline the invitation. This is supposed to be fun. It is not a command performance!

Don’t worry…. I’m not going to put the guilt trip on anyone by nominating them… you are perfectly free to latch on to this idea or not.

For the final day of the challenge, I thought long and hard about what I wanted to make my last topic about, and it occurred to me that I’d considered doing a post before on the photos I’ve taken of statues…

This is a photo I took back in September 2010 of a bust on display at PNC Park in Pittsburgh of former Pirates team president Carl Barger.  I get the idea of impressionist art, but that doesn’t always play out very well when we’re talking about sculptures of real people.  This is one of the saddest busts I have ever seen.  Poor Carl.  He left Pittsburgh to take over the same job with the expansion Florida Marlins in 1992, and promptly dropped dead of a heart attack…. no doubt because he saw this awful likeness of himself.

Now that’s better… Pirates Hall of Fame outfielder Willie “Pops” Stargell, preparing to take out that father and son who are posing in the path of his mighty swing.  Any real baseball fan would know that lefties love the ball low and inside… 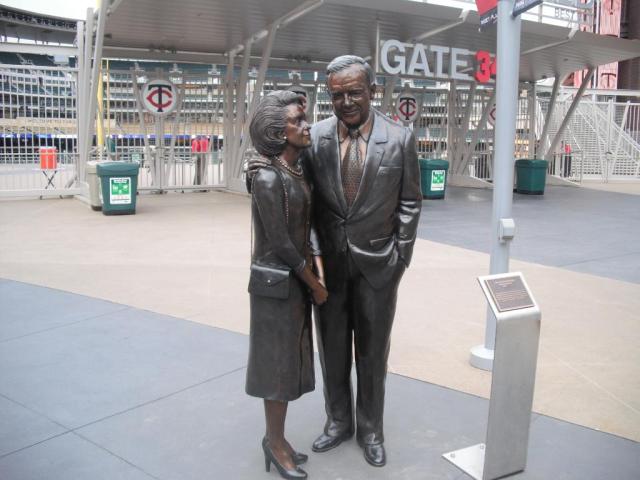 Here’s a curious statue outside of Target Field of former Minnesota Twins owner Carl Pohlad and his wife Eloise.  Carl made his fortune by foreclosing family farms during the Great Depression.  As owner of the Twins, Pohlad first tried to sell the team to a North Carolina businessman who would have moved the team to Charlotte… then was first in line to accept a proposed $150,000,000 contraction payment from Major League Baseball that would have eliminated the franchise had MLB gone through with the plan.  That was the best idea Bud Selig had to restore competitive balance to the league at the time… axe all of the small market teams.  So why did they build a statue of Pohlad outside of a ballpark that wouldn’t even exist had he had his way?  Hey, to paraphrase Reggie Jackson, they don’t build statues of nobodies! 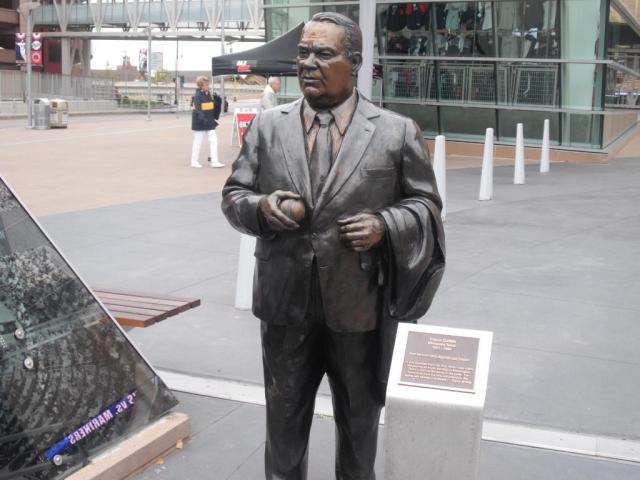 Minnesotans sure love their owners!  Not far from the Pohlads is this monument to Calvin Griffith, who brought the Washington Senators to Minnesota in 1961… becoming the first of many baseball owners to bail the hell out of the nation’s capital.  First in war, first in peace, and now last in the American League Central. 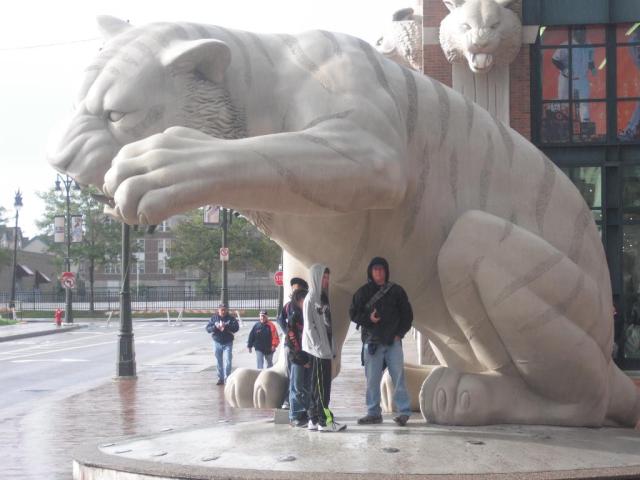 There are a lot of tiger statues around the perimeter of Comerica Park in Detroit.  Given the neighborhood the ballpark is in, I’m pretty sure they’re there for protection.

There are also a number of bizarre statues inside the ballpark…. 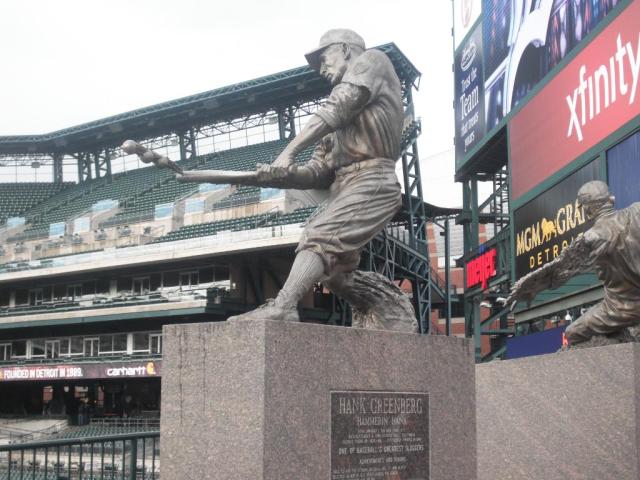 There is really no other description for what is going on with Hank Greenberg’s bat than it is obviously ejaculating baseballs. 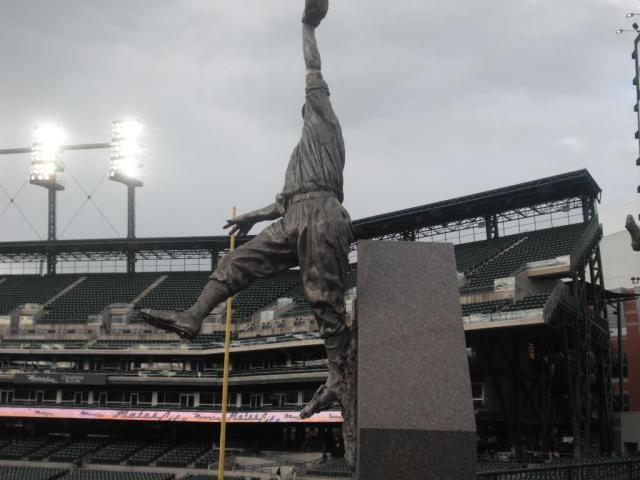 Ever wondered what Willie Horton’s ass looked like?  Now you know…

And finally, to wrap up this five part photo prompt series, here is former Kansas City Royals owner Ewing Kauffman and his lovely wife Muriel bidding adieu to everyone who put up with my pictures and long-winded storytelling all week!

Either they are saying goodbye to you all, or they are welcoming the alien ships to our planet…

31 Responses to Statue Of Limitations