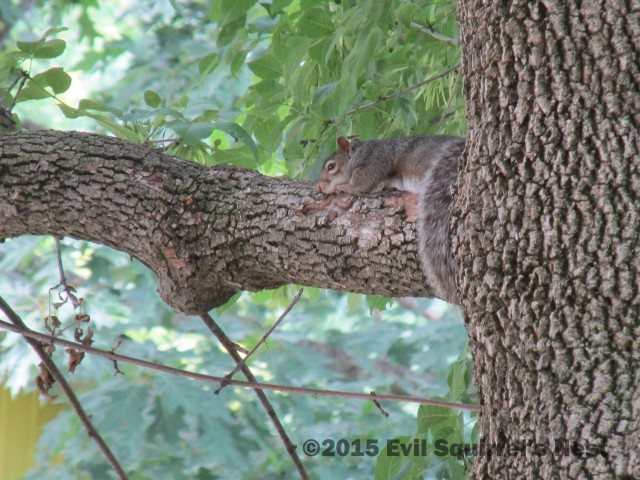 My alarm is set for September.

Today is the last full official day of Spring in the Northern Hemisphere, which means Summer is literally right around the corner.  The solstice occurs tomorrow, and where I live, it’s been anything but summerlike this past week.  It has rained pretty much the majority of the past 7 days, a monsoonish period this part of the country rarely sees.

But last week it was definitely very warm and toasty, and that’s when I took this photo of a squirrel totally chilling out in one of my neighbor’s trees.  Summer weather is hard enough on us humans, but it must be really uncomfortable for the furry critters out there.  The crepuscular activity of the local squirrels has definitely begun picking up lately… and for much of the next couple months, the rare time a squirrel can be spotted during broad daylight hours, it’ll very likely be lounging around on a limb like this week’s Saturday Squirrel is doing.  He may not look very happy, but he’s definitely got it made in the shade…

Have a great first weekend of summer, and happy Father’s Day to all of the dads out there!

Bored former 30-something who has nothing better to do with his life than draw cartoon squirrels.
View all posts by evilsquirrel13 →
This entry was posted in Saturday Squirrel and tagged hot, laying, lazy, lounging, outdoors, photo, photography, shade, squirrel, summer, tree, warm. Bookmark the permalink.