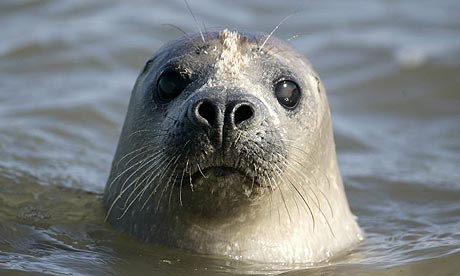 For as long as food has needed to be kept fresh, meat has had to be protected from freezer burn, and marijuana odor’s legally shielded from the police, we have turned to plastic baggies to save the day.  These wonders of environmentally unfriendly chemical compounds come in handy almost daily for many of us, making life so much easier and our fridges so much more clogged up with nasty leftovers that only the roaches will ever feast upon.  The only thing keeping storage and freezer bags from being the perfect culinary hoarder product is the fact that they’re about as easy to close up as a hooker’s coochie.

What’s up with the fucking seals on these bags anyway?  Lining up those little plastic strips and getting them to snap inside of each other is about as complicated as using bilingual pictogram instructions to put together the Space Shuttle.  The amount of food we’ve thrown away due to shitty baggies would feed all of the starving kids in Africa if Sally Struthers didn’t get to it first.  About the only thing baggies ever formed a tight seal around was your three year old brother’s neck when he’d stupidly ignore the suffocation warning on the box.

Give that kid a Darwin Award!

After being pelted with rotten food from unsatisfied customers for years, the baggie conglomerates finally got serious about doing some research into how they could improve their product so that people everywhere could go to sleep at night knowing that their sausage wasn’t being spoiled by an unzipped fly.  And you know I wouldn’t be talking about closing damn baggies on a Friday if it didn’t spawn a great retro ad campaign or two! 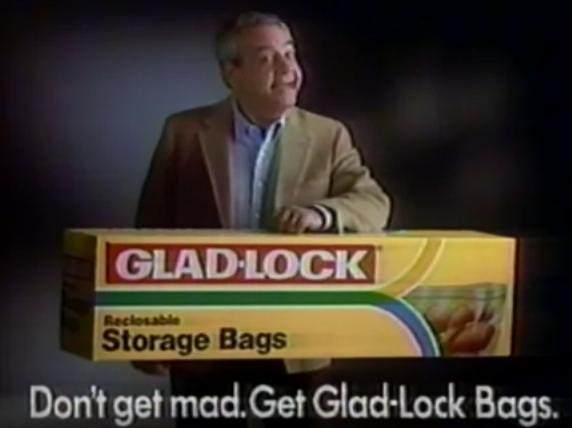 Oh, sit on it Mr. Cunningham!

First up, in the late 80’s, Glad came up with a colorful way for us to determine if those unwanted lima beans were still going to be fresh for tomorrow’s breakfast…

Rather than actually improve the closing mechanism of their bags, Glad Lock instead just came up with a way that you could maybe tell if the bag was closed if you didn’t happen to be color blind and/or stupid.  One of the basic art lessons we get in school during the days when the big honking Crayolas are more of a safety hazard to children than the pussy scissors is which colors mix with other colors to form other other colors.  Now every time we put that nasty open can of cat food in a baggie, we could relive the experimental fun of fingerpainting in pre-school.

The genius behind the yellow and blue make green baggie innovation.

About the only thing more moronic than putting piranhas in a thin plastic bag is trusting an optical illusion to tell us if our baggie is actually closed or not.  If the yellow and blue strips are so far apart that we don’t see a solid line of green as we peer upon our bag, then chances are we could have probably picked up on that breach in the seal even with a non-colored bag.  Yellow and blue makes green didn’t really help save any more food from spoiling than the time-honored practice of wrapping up future noms inside of intestines.

Would you like some spoiled pancreas from the fridge, Clarice?

Well, Glad Lock wasn’t any help in keeping our goody bags airtight.  Luckily, in the early 90’s, Ziploc showed us that instead of trusting our eyes, we should let our fingers do the walking instead…

Yes, to demonstrate the amazing closing power of their new Gripper Zipper, Ziploc decided to give us all the finger. 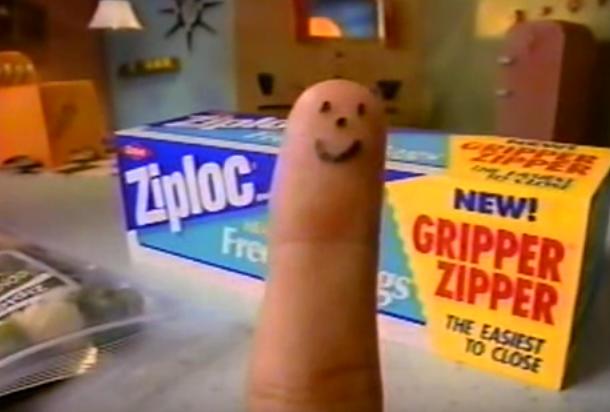 So we got introduced to Finger Man.  No, he wasn’t a lost mini-boss from the Mega Man series… he was just the index finger of the commercial’s Best Boy Grip since there is no such thing as union scale for fucking finger models.  Finger Man didn’t even get a cute little finger puppet to dress himself up in… he just popped up in the buff with nothing but a little smiley face scrawled atop his bald digit and lip synched to annoying voiceover guy who does a bad imitation of someone who’s been sucking on helium.

Or huffing glue through a yellow and blue almost made green bag.

How do we know the Gripper Zipper is actually closing the bag that we’ll leave rotting in the crisper?  Because you can feel the teeth coming together as Finger Man slides his stupid little pinkie face across the baggie, that’s why!  It must be working because we can feel that something is happening!  Sound familiar?  Yes, the same leap of faith Denorex wanted us to make a decade earlier is now what Ziploc is banking on for you to forsake Tom Bosley and trust a stupid finger who can’t even give its advertising pitch with a straight face. 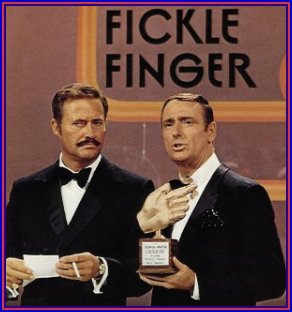 I think we’ve found a worthy winner to sock this award to.

What was even more insane than trying to make us believe a little snap, crackle, pop was ensuring that our meat was going to be kept fresh was the very fact that Ziploc decided a crudely anthropomorphized finger was the proper spokesdigit for their product in the first place.  Sure you need to use a finger to close a storage bag, but you also need fingers to use just about anything, and there wasn’t exactly a proliferation of product pitching fingers out there in TV land.   For that matter, did any automobile manufacturer prop up someone’s right foot to advertise their cars?  Were the ads for those starving artist sales told by a closeup of some creepy looking eye?  Could you imagine if Trojan used this line of thinking to advertise its condoms?

Well, it’s time to finally put this post in an unsealed, ummarked bag and chuck it in the back of the fridge to rot with all of the rest of the inedible, unreadable content of this room temperature blog.  But before we get to watch the appliance bulb goes off and we get confined next to the half used stick of butter, The Nest would like to salute Glad Lock and Ziploc for keeping everything under wraps.  Thanks to you, we will always remember why the water turns green when we take a leak, even if we really didn’t want to know why fingers are always smiling.

Bored former 30-something who has nothing better to do with his life than draw cartoon squirrels.
View all posts by evilsquirrel13 →
This entry was posted in TV Commercials and tagged advertising, baggies, colors, commercial, fingerman, freezer, fresh, fridge, glad, retro, seal, storage, tv, yellow and blue make green, ziploc. Bookmark the permalink.

31 Responses to A Tight Seal