You can read about why squirrels have a bone to pick with the founding fathers here.

It’s Wednesday, which of course means it’s Black Friday Eve… not that that makes a single bit of sense from a Gregorian standpoint.  Anyway, it’s time once again for me to roll out some pretty pictures for Marilyn’s Serendipity Photo Prompt.  The “Frisbee,” as she once dubbed it, is being retired and will be no more after this week… but The Nest still plans to make every Wednesday non-sciurine picture day.  This has been my favorite new feature I have added to my blog this year, and I look forward to continue telling my twisted but true tales to the beat of my world famous shitty photography…

So, with all of the farewell bouquets and cat calls out of the way… let’s meet the subject of this week’s post:

There are guys who are absolutely in love with cars, and I am fortunately not one of those people.  Never been a car guy, never will.  But it’s hard for me not to have a higher than normal amount of affection for the vehicle that has been my constant companion for 15 years now.  On November 24, 2000… which only coincidentally happened to be Black Friday that year… me and my Dad ventured to the Chevy dealership across the street from my Mecca to find my very first car.  While I very much wanted a red car since it’s my favorite color, and there were plenty of gingers to choose from, I wound up driving off that day in the only blue used car on the entire lot.  I’ll bet every one of those red cars I passed on is rusting in a junkyard somewhere right now… 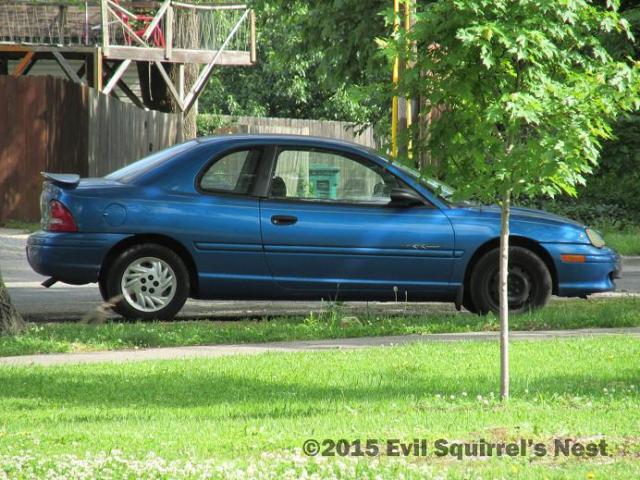 My car patiently waits while I take pictures of squirrels in the park while trying not to look like a pedophile.

My car is a no-frills 1998 Plymouth Neon… a make and model that have both long since gone extinct.  The dealer who sold me the car fast-talked me into purchasing GM’s extended warranty.  I can’t possibly thank him enough since I more than got my money’s worth of free repairs from those extra two years tacked on to the rapidly expiring original factory warranty… and that was the two year window during which both of the major issues my car wound up having surfaced.  In December 2001, a short in one of the computer’s wires kept kicking the car into perpetual high idle whenever it would rain.  Try convincing an ASE certified mechanic that your car is only having some under the hood issue while it’s raining.  After three tows and three repairs (All on General Motors’ tab… bet they liked paying for a car they didn’t even manufacture!), they finally conceded I might be right and identified the problem by squirting the living shit out of everything under the hood with water bottles.

Then the following year, my poor Neon began leaking oil like a sieve with holes in it.  Since I was literally months away from that extended warranty expiring, I was convinced to take it in and discovered the wonderful world of how Neons were built with the world’s shittiest head gaskets.  Despite Chrysler discovering the issue and designing a superior model shortly after my car was made, the customer friendly auto giant could not be bothered to issue a recall on the damned thing.  That made me one of the lucky few Neon owners who got a brand new head without having to pay a penny…. again, on GM’s dime.  No wonder Detroit needed bailing out… 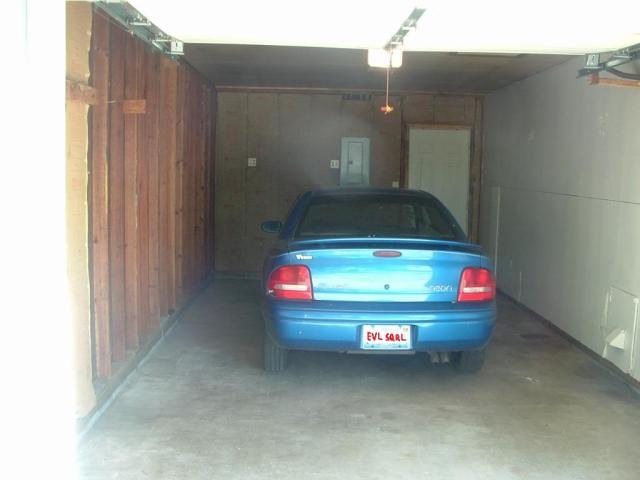 After 8 years of being a birdshit depository, my Neon was very happy to get its own garage… which incidentally is no longer that clean.

After that rough start, it seemed inevitable that a continuing string of costly repairs was going to eventually force us to break up.  Yet amazingly, the car’s needed very little fixed outside of routine maintenance over the past 12 years.  The fan that kept the engine cool broke once (Overheating in an interstate traffic jam with your 8 year old nephew in tow is so much fun!), the AC crapped out and became unusable due to power draining issues, a bad brake job (NEVER EVER GO TO MIDAS, FOLKS!) caused my passenger front tire to smoke before the whole brake set up finally exploded.  And just last week, I sprung a coolant leak… though those hoses badly needed changed anyway.  On average, I’ve spent maybe $500 a year on the car.  Before you say that’s too much, compare that to a monthly car payment for a minute.  Since I made my last payment in February 2005, and dropped expensive full coverage on the car in March 2008, I’ve literally saved tens of thousands of dollars over that time span… money that has been well spent replacing all the shit that’s breaking down in my home.

My car isn’t afraid to take on SUV’s twice its size.

While I may procrastinate on oil changes and neglect to clean the inside of the car like….. ever, I’ve really been very good to it during our 15 years together.  It’s been fortunate to have only been involved in three minor accidents.  The first occurred in 2004 as me and another driver backed into each other pulling out of opposing parking spaces.  That busted out part of my left tail light… a scar the car still bears today.  Then while I was still living at home, my sister side-swiped my parked car after being spooked by some idiot tailgating her.  That stripe of red paint is still near my driver’s side reflector as well.  And then there was my totally at-fault accident I got into on an Oklahoma trip in 2011 where I tried to make a dangerous left turn and T-boned an SUV (At maybe 5 mph) while trying to pull into a damned Whataburger.  I’m so glad the other driver settled things out without getting the police involved (Still ticket free, that’s me!)… though I can’t believe my insurance company didn’t question why cars from Illinois and Texas were involved in an accident in central Oklahoma. 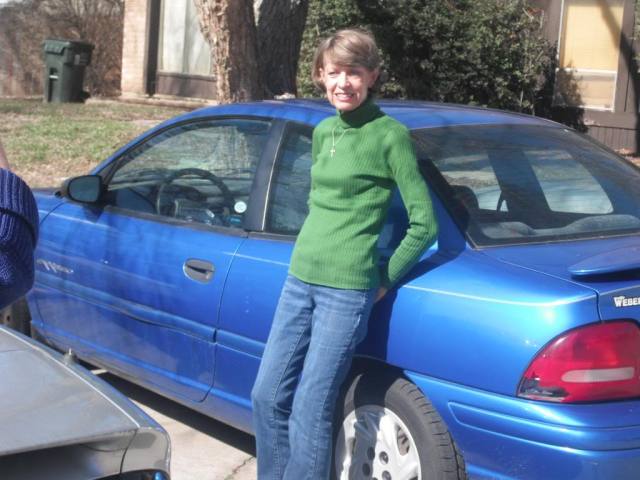 One of my message board friends portraying the hot car model.

While I knew I didn’t have many photos of my car in the archives, I was extremely disappointed to realize just how few times I’d bothered to take its picture.  Despite taking it along with me on baseball trips to Cleveland and numerous jaunts to Kansas City where I’d taken plenty of other photos, I didn’t have a single damn Neon picture in either folder!  Oh well, with a cracked tail lens, two missing front hubcaps (I won’t bother warning you about the local tire shop that fucked that up), the driver’s side paneling missing, and countless dents, scratches and paint streaks… my Neon is probably just as rightfully camera shy as I am.  In my car’s glory days, it actually got quite a few compliments from pretty girls who thought it looked “too cute.”  If I were a playa, this car no real man would be caught dead driving could’ve probably picked up a lot of chicks back in the day.

Hey, at least it’s still stylish in its old age… if not clean.

As it sits in my garage while I type this, I’m still just a couple hundred miles short of having put 100,000 on it since I drove it off the lot that chilly November afternoon when Bill Clinton was still President and Regis was the talk of TV.  No doubt the fact that I have a very short commute is a large factor in why it’s still on the road.  I like to think I have an unwritten agreement with my Neon… as long as it keeps getting me from Point A to Point B, I’ll keep it out of the junkyard, or even worse, from belonging to some idiot kid who’ll drive it into its grave.  Who needs to play the expensive game of constantly upgrading your car?  Take care of it, and it will take care of you.  Your bank account will thank you…

Some day I’ll tell the story about when the chemical plant decided to use my parents’ street as their own personal parking lot.

I’ll try to do better, or at least keep it shorter, next week…

Bored former 30-something who has nothing better to do with his life than draw cartoon squirrels.
View all posts by evilsquirrel13 →
This entry was posted in Picture Day and tagged 15 years, 1998, dodge, neon, photo, photography, plymouth, reliable, repairs. Bookmark the permalink.