It’s gonna be a Good Friday…

They say this week is holier than a pair of 80’s jeans… and if that’s the case, The Nest is here

to properly desecrate it.  Welcome to the next post in my revival of the Prompt the Squirrel series!  I was so excited when I got 12 prompt submissions within the first few days of asking for them, because I knew that meant this was going to be a banner sophomore season for PTS!  And sure enough, two weeks later I have a whole……. 12 prompt ideas.  Double-U Tee Eff, everyone?  Prompt the Squirrel can’t survive without your input, and I’m as desperate as Johnny Five here!  Take a couple minutes, think of something cool, strange or otherwise you’d like me to do a post about, and then get it to me via the contact form!  Please, don’t make me get down on my knees and beg for your prompts! 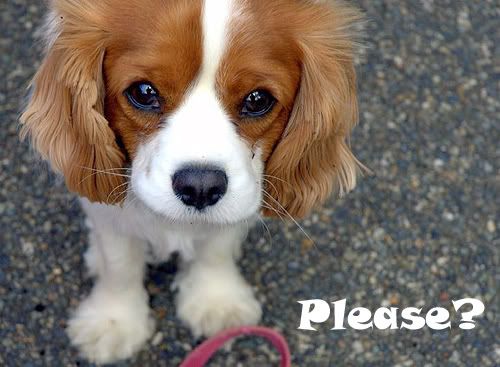 Are you going to tell this face you can’t send me a prompt?

One of my readers who did send me a prompt both this year and last year is Marilyn, who writes the Serendipity blog that is full of her photos, thoughts, life experiences and sometimes just plain irreverence.  It’s the last part that must make her a fan of my blog and the cast of poorly drawn misfits that populate it…

I keep “discovering” comics you did before I followed you … or early on, which I’ve forgotten. You need a “best of the nest” day. You could post your “last supper” every Friday as far as I’m concerned. I don’t think I’d ever get tired of it.

Also, please do a series of posts (again, probably, but I’ve missed stuff) give the back story for all the critters. I’m memory-challenged these days and need frequent reminders!

Well, I took care of the Last Supper request since I, by complete coincidence (I swear), chose to do this prompt on Good Friday…

I always invite my readers who get a laugh or some other form of enjoyment out of what they see here to dig deeper if they have some dead time and check out my older stuff.  At least one of my followers (And she knows who she is!) can vouch for the treasures that can be found in the days before you were ever cursed to know The Nest existed.  That’s not as easy as it sounds, though, given WordPress only lets you see 5 posts in any category at a time and won’t let you skip further ahead without monkeying with the url.  Here’s the link to the current Page 30 of my Comics category… and you can manipulate it forward or backward in time by changing the “30” in the url to a lower or higher number respectively. 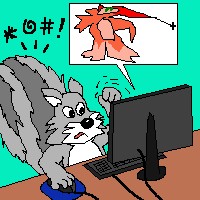 Could they make this any harder?

I went back and looked over my first year-plus of comics and picked out some of my favorites (Which probably means they’re the ones nobody else will like).  I’ll include links to each one so you can check them out if you want, or ignore this whole section if you could care less.  And BTW, I’m not one of those people who thinks it’s creepy to like or comment on ancient posts… feel free to let it rip if the spirit moves you…

#13 – My send up to the bottled water phenomenon

#46 – Cell phones and food. (This is still one of my favorite “look how stupid technology has made us” comics, and I’ve done a LOT of them.)

#60 – One of my nastiest, funniest last panel surprise comics. 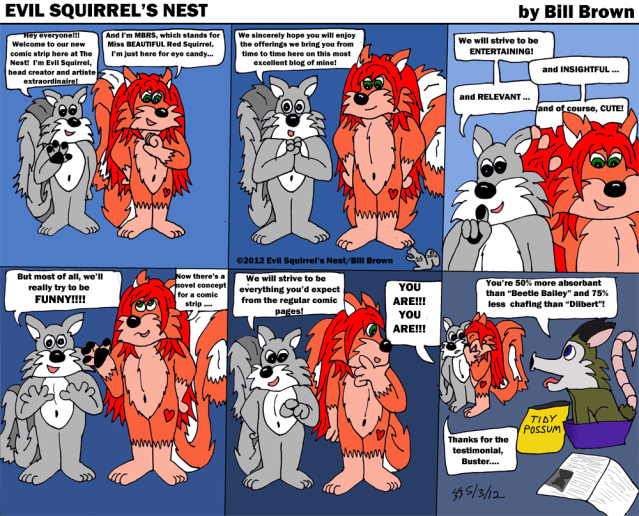 I could obviously spend hours and hours boring you to tears talking about how many of my characters came about.  As with any series that has evolved over time, there’s a lot of interesting tidbits about where each character was inspired and developed into what they’re known for today.  Serendipity (ha!) plays no small role in that development, and almost every one of my critters has at least one “What if?” scenario that, if removed from the timeline, leads that character straight into the forgotten dustbin or possibly even never seeing the light of day at all! 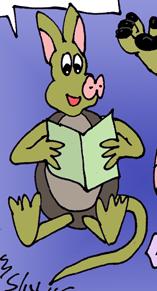 Take one wild night in the chat room away three years ago, and we have no Pigladillo.

Doing a series on the formative backgrounds of my gang here has actually been an idea for a weekly series I’ve tossed over before, but I thought it might be too “geeky” and draw a lot of people away.  I’ll certainly keep it in mind as a possible successor to this round of Prompt the Squirrel since I never really came up with a new regular Friday series after last year’s ended.  You’re no doubt dying to know under what circumstances we wouldn’t be able to enjoy Evil Squirrel, MBRS, Robbie, or…. gasp, even Rainbow Donkey! 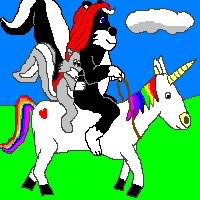 Drawings this bad generally do not lead to viral internet characters.

Those scintillating tales will have to wait for the new feature, if I decide to do it.  But I did promise you the story behind how Buster came to life so he could die a thousand deaths for The Nest… so, let’s flashback to 2008! 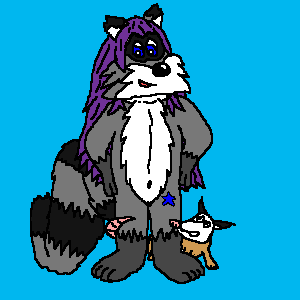 Who wouldn’t be smiling if they were being stalked by a possum?

In my post Wednesday, you met Holly… one of my friends from the Who Wants To Be A Millionaire message board I’ve spent over a third of my life on.  Eight summers ago, Holly was doing battle with a wayward possum who kept trying to get into her home.  That was the same year I was inspired to begin drawing on the computer, doing a project where I was making a personalized “portrait” for many of the message board’s denizens… creating an anthro-style character for each of them (Several of which made the transition to my comic) and putting them in a humorous scene based on whatever I could latch on to.  For Holly, it was her adventure with the possum.  So…

Yes, this artwork is old and hideous… and Holly’s actual board username was Second Chance…. 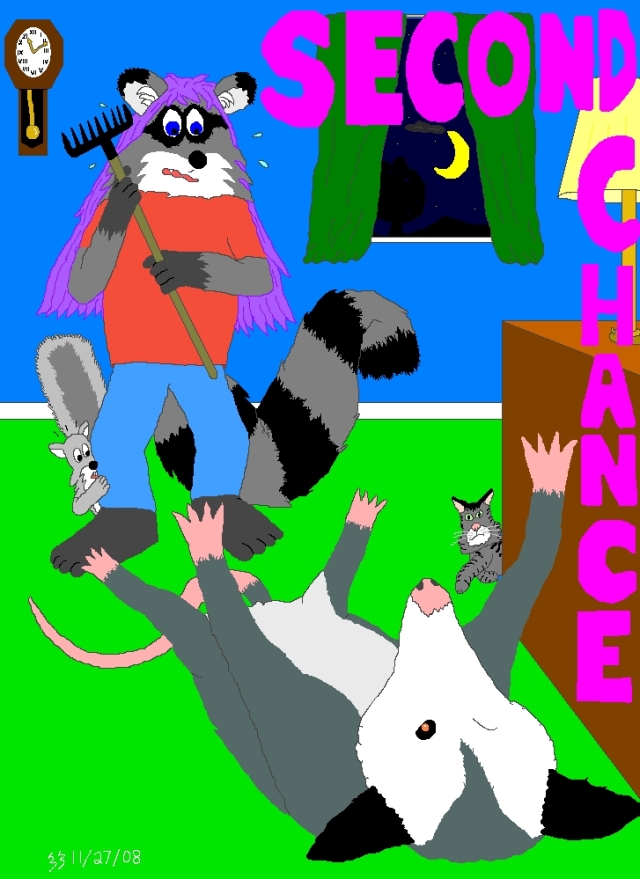 It was my first possum… and oddly enough, maybe the most realistic one I ever drew.

So, as Holly became one of my favorites via coming to chat, I continued to torment her with the possum.  It was the one thing I could always fall back on for humor… 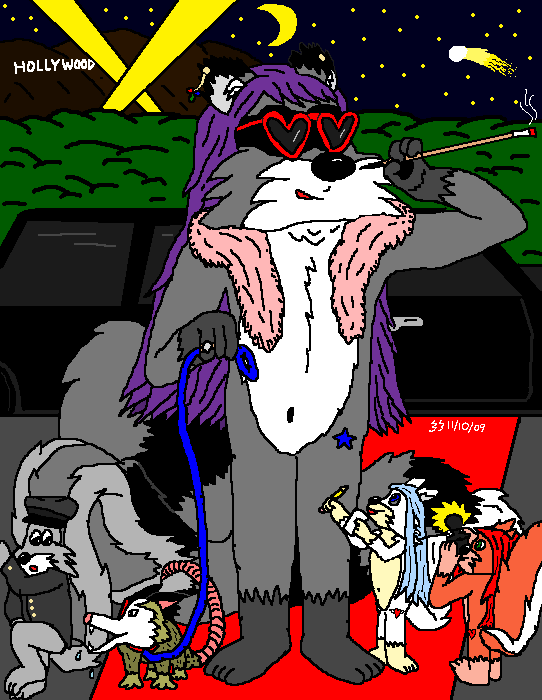 One year later… and looking more and more like the possum we know.

Then in 2011, I decided to make personalized birthday cards for a handful of my friends.  Of course, the possum was going on Holly’s when her birthday came in May… 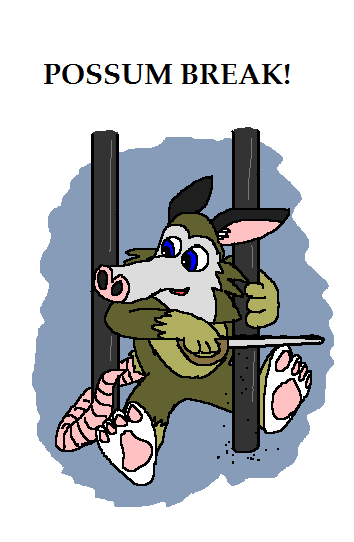 Yep, I think we know that mangy marsupial.

Naturally, she commented on me putting her least favorite critter on the back of her card… and it was then I was beginning to realize that the possum might have potential as a more regular character.  So I asked Holly to give him a name.  She came up with two choices…. 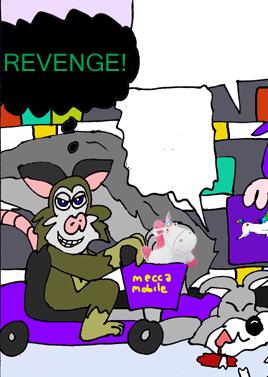 I chose the latter. 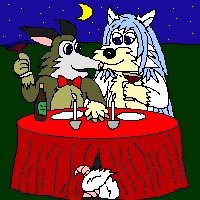 I’ll drink to that!

Buster still needed one final kick in the tail to get started on his path to internet stardom, though… and that came from an incident that occurred during my Mecca’s Stupidcenter remodel in the early morning hours of July 2, 2011 while we were all on lunch break.  A brazen thief snuck in through the area under construction, walked a football field across the store to our Electronics department, chose a big screen TV and pushed it back all the way to the other end of the building to his car and made a clean getaway.  It inspired my art muse, and when I was thinking of who should play the thief, I remembered my newly named possum and thought that sneaky little bastard would be perfect… 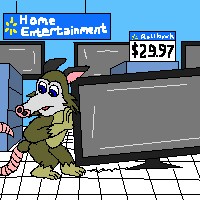 So you see how Buster went from tormenting one poor woman to being the bane of my entire blog’s readership.  How he morphed into a walking death trap is a story for another day… 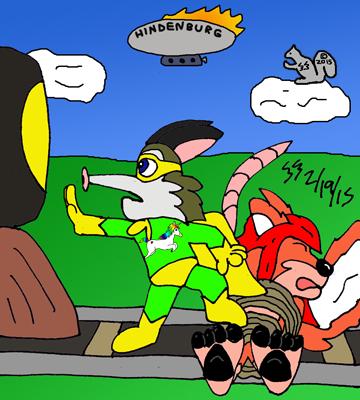 At some other bat time, on a different bat channel…

Thank you Marilyn for letting me reminisce with your most excellent prompt!  I’ll return next Friday with another idea from those of you who love to see a train wreck…

Bored former 30-something who has nothing better to do with his life than draw cartoon squirrels.
View all posts by evilsquirrel13 →
This entry was posted in Friday Prompts and tagged artwork, buster, characters, comics, creation, friday, holly, marilyn, old, prompt. Bookmark the permalink.