bathroom, but there is just enough room for one more double-ply idea from my readers to satisfy you from top to bottom on Prompt the Squirrel Fridays!  This will also be the last time you’ll have to bear with me groveling for more prompts from those who have decided participation is something that only other people do.  Not that I won’t gladly accept any newcomers up until the series is closed out (which right now would be in late July), I just won’t keep up with these constant reminders most people skip over anyway in a frantic race for the Like button so they can go read something more interesting on another blog.  But you know how it goes… if you haven’t submitted a prompt for PTS2 yet, then you aren’t on this page somewhere… and the only way to get on there is to go to the contact form here and enter a post idea!  This is your final warning!

Failure to participate in PTS2 will result in public humiliation by Angry Soccer Dad.

This week’s prompt comes to us from Ally Bean, author of the blog The Spectacled Bean, and someone so experienced at blogging that you were probably in diapers when she made her first post (That may be a slight exaggeration).  Since I’m such a friend of her resident sciurine Fuzzy, she was kind enough to give me this topic to work with…

Let’s say that Evil Squirrel’s Nest has become incredibly popular, as well it should be. Hollywood has expressed a desire to make your comic strip into a movie for the big screen. You’ve been give carte blanche power to cast any famous actor or actress to star in the movie. Who will you cast?

I had decided I was going to tackle this prompt last week only to end up being thwarted by it because of the sad fact that I do not keep up with the celebrity world, nor am I very good with movies.  Very few of the character slots I had written down were being populated by an appropriate actor… and then I realized one of my critters would be best played by a particular cartoon character.  That’s when a novel concept hit me and I realized I was going to have to shitcan what little I had already done and completely rethink how I was going to do this prompt…

Sorry, but this shitcan is occupied.

So rather than cast real, human thespians for Evil Squirrel’s Nest: The Movie, I’m going to instead turn to a group of players I am much more familiar with and who won’t even have to be paid at SAG rates… fellow cartoon characters!  Now keep in mind, there’s even plenty of animated stars that I have little familiarity with… all those Fox primetime toons, the Cartoon Network stuff, and anything Nickelodeon aired after the 80’s… all of it is cartoona incognito to me.  But I was able to fill out my list reasonably well, and I limited myself to only one character from any particular cartoon series to make my cast more ethnically diverse and fucked up. So now, I present to you the all star cast of cartoon rejects who I’ve hijacked to star in my summer blockbuster!

One of the reasons I limited myself to one character per cartoon series is because I could have pretty much filled out my entire cast just from the mid 90’s masterpiece that was Animaniacs.  Yakko as the crazy eldest Warner sibling has the necessary skills on how to lead a cast full of misfit dumbasses, and is quite a smartass to boot.  Plus, we’ll need his famous “Goodnight everybody!” line when Buster starts talking about his bifurcated penis again… 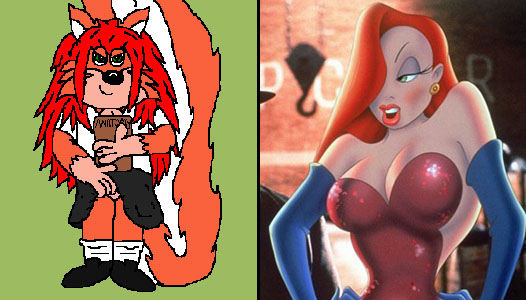 This one would seem like an obvious fit (Although MBRS has a real life famous doppelganger as well).  One red headed seductress to play another, and each smoking hot babe seemingly hooked up with a real douchebag that’s too poor to be a sugar daddy.  MBRS isn’t really bad, she’s only drawn that way…

Cindy Lou Who as Angel:

The cartoon world must be a really corrupt one, because I had a hell of a time thinking up someone to play my pure, innocent Angel.  Sure, there may be a bit of an age discrepancy between actress and role here, but since Angel has the mind of a five year old, Cindy shouldn’t have any trouble pulling her personality off. 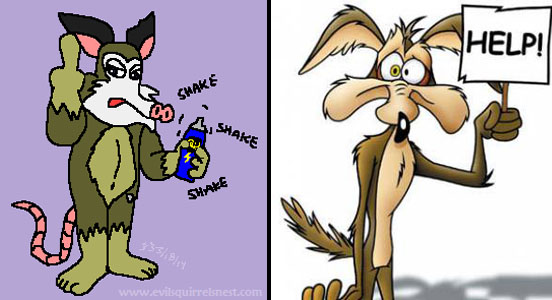 While Buster’s mentor Kenny McCormick was considered for this role, we preferred Wile E.’s brand of bad karma and shitty luck when it came to playing our squishable possum.  Just as Buster has his fans on my blog who actually feel sorry for all of the death and mayhem I put him through, so do many Looney Tunes followers have a soft spot for Mr. Coyote’s many gruesome ends he meets while he is just trying to fucking catch some dinner.  Road Runner was an asshole…

Another case of seemingly obvious casting, although there is the genderswap problem.  Just like guys at the Globe Theater played all of Shakespeare’s sultry sirens while in drag, it has become trendy for chicks to turn the tables on male characters these days.  Just ask Rocky the Flying Squirrel, Bart Simpson and Peter Pan what it like to have the power of the vajayjay behind you.

We might have to up Daria’s excitement level to pull this off, but her square peg in a round hole world persona is a perfect match for Odyssey.  Her experience with malecritters like Beavis and Butthead will be a plus…

Alice in Wonderland as Hottie:

I really struggled to find a cartoon match for Hottie, but I think Alice could pull it off.  Both are natural blondes, kinda old fashioned, and are innocent pawns in a dangerous world full of creepy shit.  Hopefully we can at least get Alice to fake Hottie’s overly happy nature and make her smile by repeatedly saying “Eat me!” on the set…

Two troublemaking brother/sister twins deserve another similar set, and thankfully despite the fact that I’m apparently the only male who grew up during the 80’s who has zero recollection of the Thundercats cartoons, I do know this pair exists… and I’d swear there’s even a resemblance between the two feline mutants and my squirrel pups.  Better yet, more inexpensive child labor to add to the payroll!

It’s a shame more Americans aren’t aware of the epic British cartoon Danger Mouse that was a staple of Nickelodeon back in the 80’s, but we aim to give the one-eyed spy’s hapless hamster sidekick Penfold some more exposure by casting him to play The Nest’s hapless raccoon sidekick.  Hey, we don’t even have to break the budget on some prop glasses for him to look the part… bonus!

We all know that chicks dig the ‘dillo, so we need a really adorable ladies critter to realistically play Pigladillo in our screen adaptation.  Why not the world’s most famous Pokemon monster?  Both P-critters can melt your heart with just one look and are known to hang around unsavory characters who end up getting them into all kinds of trouble.

Because…. why not?  Sandy Cheeks already gets more searches here than anyone else but the xxxxxxxxxxxl guy, so she may as well officially incorporate herself into Evil Squirrel’s Nest lore and actually portray one of my characters…

There are many smooth operators out there in the world of animation, but for a playa like our kangaroo Clem, we have to turn to biggest cartoon studmuffin of them all, Scooby Doo’s dickhead friend Fred.  Nobody was better at figuring out how to get some alone time with the ladies.  “Buster and Rainbow Donkey, you two go on a wild goose chase to find the elaborate system of pulleys and levers some bored bad guys are trying to use to scare people away from their hideout.  Me, MBRS and Hooly will go this way to that secluded back room and…. um, check some things out there.”  Stay thirsty, my friend…

We probably can’t give Skanki too big of a role in our movie without getting it confined to the back room of your local Redbox, but inserting our Russian borzoi into the film gives us a chance to borrow a Rocky and Bullwinkle character.  Or I guess we could always cast Fearless Leader as the Boss at Mecca…

You’d think I’d have had a plethora of cartoon assholes to pick from to take on the part of my prickly Nabob, but most animated bad guys are just plain evil villains or misanthropes who through some shitty moral lesson learn to see the light.  Grumpy Bear would use his Care Bear magic to boot unruly kids off of his lawn and look awfully damn cute doing it.  Yep, that’s our Nabob!

And finally, we need to make sure our movie is a hit with the kiddies.  Since I’m not licensed to use Jar Jar Binks’ image, we’ll have to bring in our hyena wildpup Wiki to lure the preteen set to a theater near you.  Bam Bam seems to have been born to play this role… and since Dinkum Island technology is on a par with that of prehistoric Bedrock, the transition should be seamless for our caveboy turned island native.

So, there you have the star-studded cast for Evil Squirrel’s Nest: The Movie.  Many thanks to Ally Bean for inspiring me to find the fictional characters my fictional characters fit the best!  Now, if you want to find out what ESN:TM might do as far as putting together a shitty plot before you waste your money and stand in line for four months waiting for the premiere… well, tune in next Friday and maybe I can throw one together!

Bored former 30-something who has nothing better to do with his life than draw cartoon squirrels.
View all posts by evilsquirrel13 →
This entry was posted in Friday Prompts and tagged cartoon, characters, friday, funny, humor, movie, prompt. Bookmark the permalink.