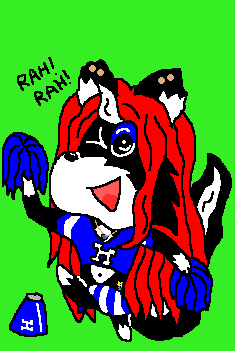 You’ve made it through another week of shitty posts here at The Nest, and are no doubt wondering to yourself just how much worse can things get?  Well, it’s finally Friday, and that’s the day we get help from our ungentle readers to whip up another batch of virtual indigestion in our second season of the Prompt the Squirrel series!  Yes, it’s time for our weekly exercise in why it’s not always a good idea to give fodder to a deranged mind that has a bad reputation for barfing up mountains of bloggy puke that will put your cats to shame.  Then again, our society today always encourages people to make mistakes they’ll end up regretting when they finally grow up, so feel free to do the wrong thing if you want to help contribute to this growing vast wasteland of cyberspace… 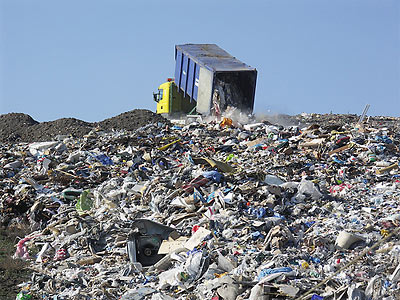 This week’s prompt comes to us from longtime Nest follower The Cutter.  Last year, he gave me what was probably the most open ended suggestion of the entire prompt series and I turned it into one of my favorite posts I have ever written here.  Apparently not one to follow a proven formula for success (Or perhaps in an attempt to sabotage my blog), for PTS’s sophomore season, Cutter did a complete 180 and gave me one of the most oddly specific prompts I’ve seen land in my inbox over these past two years.  This is what I have to work with…

WWE Superstar Triple H vs. the band Local H: Who ya got??? 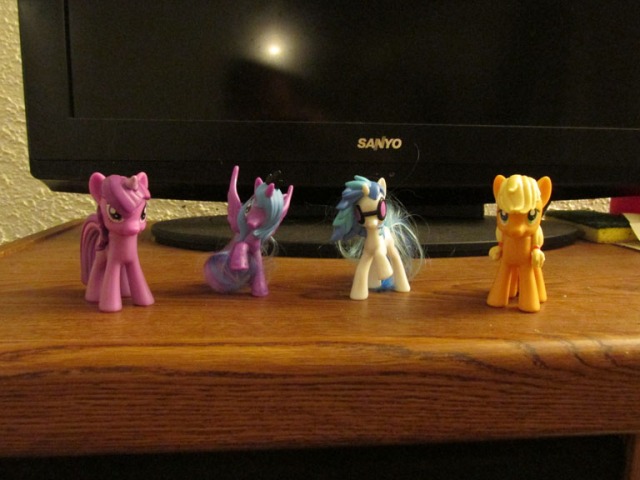 VINYL SCRATCH: Dafuq is this shit?

PRINCESS LUNA: My omnipotence is failing me here…. WWE?  Local H?  This is as confusing as trying to schedule a lunar eclipse!

TWILIGHT SPARKLE: I accept this challenge!

SCRATCHY: You would, Egghead.

TWILIGHT: Now come on, fillies!  This can be a learning experience for all of us!  You never know when random information will come in handy…

AJ: Oh yeah, like that time I whooped Big Mac’s hide at Jeopardy because I knew what aglets were!

TWILIGHT: Precisely, AJ!  To the computer we go! 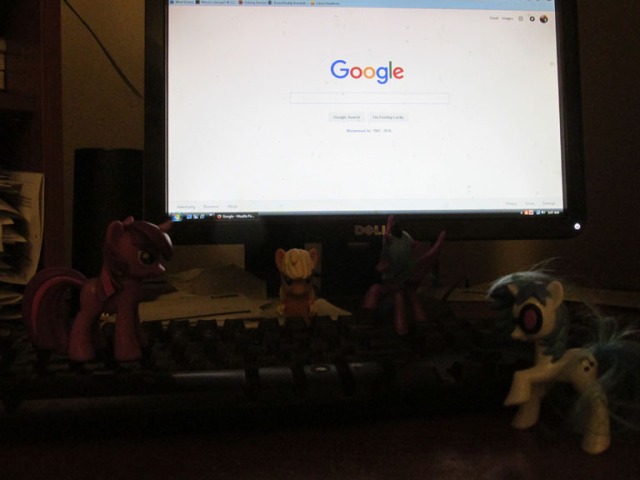 TWILIGHT: With Google, we can find out anything we’d ever want to know about everything!

LUNA: I am not amused that there is a computerized algorithm that is more knowledgeable than a goddess.

AJ: There’s more food wedged inside tha’ buttons on this keyboard than I have stored in tha’ silo!

TWILIGHT: So I just type “Local H” into this space here, and… 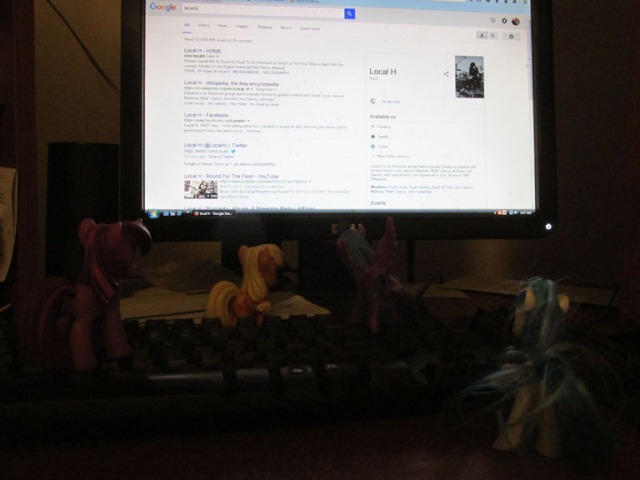 TWILIGHT: Ta-da!  Everything you could ever want to know about Local H!

SCRATCHY: Grunge!?!?  We don’t play that angsty shit down at the club!  No wonder these rejects aren’t in my collection.

LUNA: This act is apparently playing in Denver as we speak.  I wonder if I can pull some goddess strings to get us tickets.

AJ: Their biggest song was something called “Bound For The Floor”… we should check out the video!

SCRATCHY: I once bound Octavia TO the floor, and…. well, let’s not discuss that here. 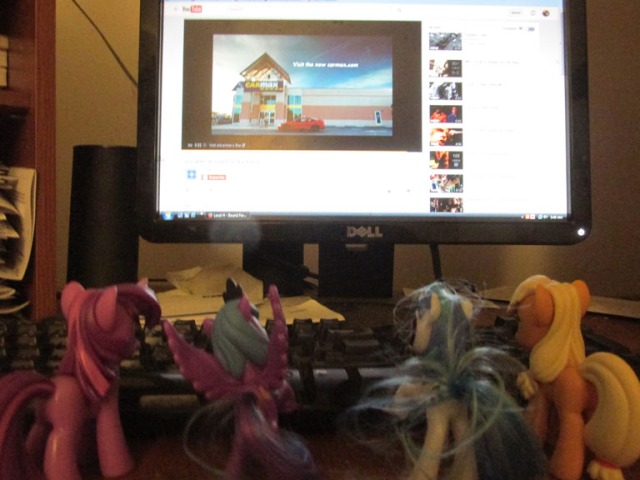 LUNA: Celestia dammit!  You can’t watch anything on YouTube these days without getting bombarded by insipid, unskippable advertising!

TWILIGHT: Well, Your Highness, the artists and their people need to make money off their music somehow.

SCRATCHY: Hey, I’m in the market for a new car right now.  I wonder how many subwoofers that little red badass has standard? 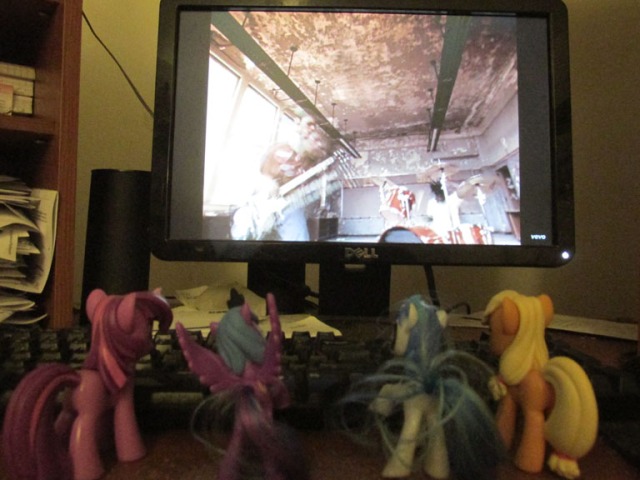 TWILIGHT: I’m worried both of those poor musicians will end up with head trauma by the time this video shoot’s over.

LUNA: I must say, I do love me a nice, crazy ass drummer.

SCRATCHY: Drummers, who needs them?  I lay down a killer beat every night without having to wield a single drumstick.  Long live techno! 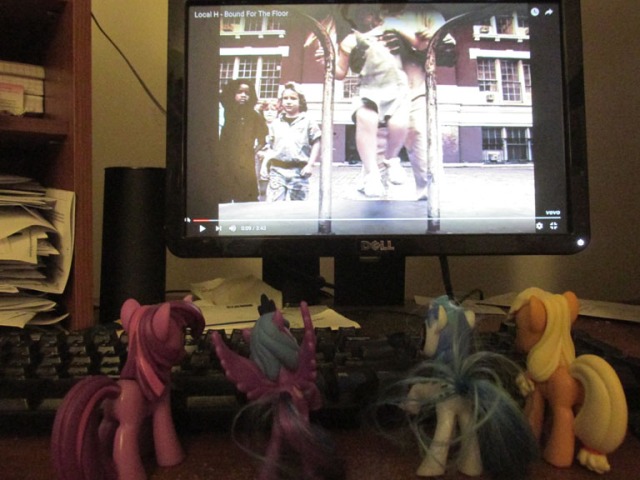 AJ: Yowzas!  There sure are a lot of foals in this video.

LUNA: Where are their parents?  Who lets children of that age listen to hard edged music like this?  If this was filmed in 1996, then they’re all in their 20’s right now and I’ll bet every one of them still lives in their mother’s basement!

SCRATCHY: I hope they had Chris Hanson on hand to supervise this shoot. 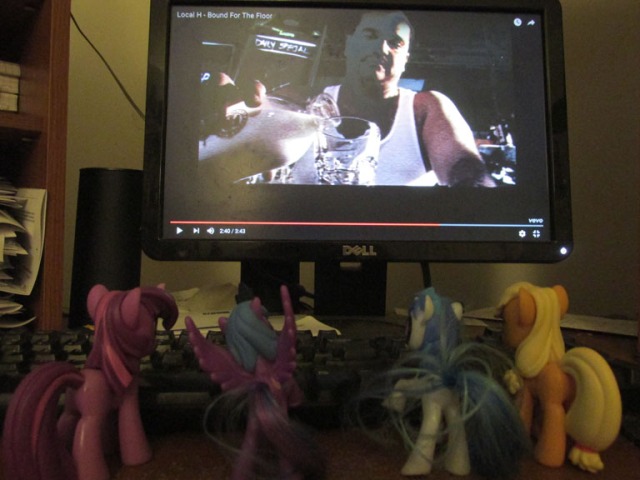 TWILIGHT: Sir, would you like to take a seat over there?

LUNA: I may be all-omniscient, but I don’t want to know what’s in that “milk”… 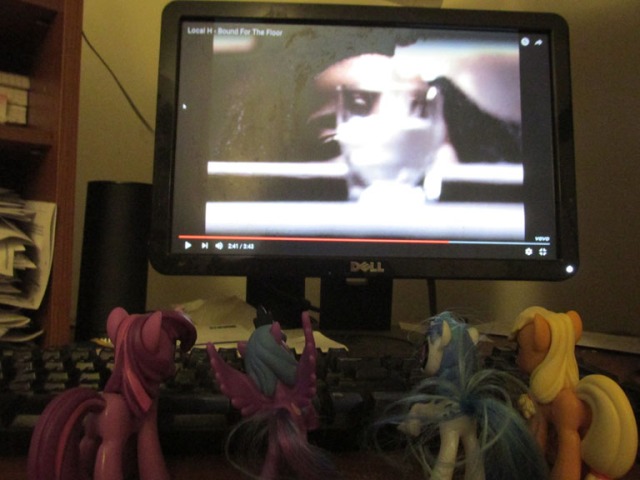 SCRATCHY: This video is creepier than a Halloween night rave!

TWILIGHT: This is why mother always told me not to drink milk from strangers.

AJ: Aha…. so this explains why mah sis Apple Bloom came home sick from that concert…

LUNA: I am not impressed with this Local H band…. not one bit.  I would have them sweeping stardust out of the sky all night long if I had my way.

TWILIGHT: Well, let’s check out their competition Triple H, then! 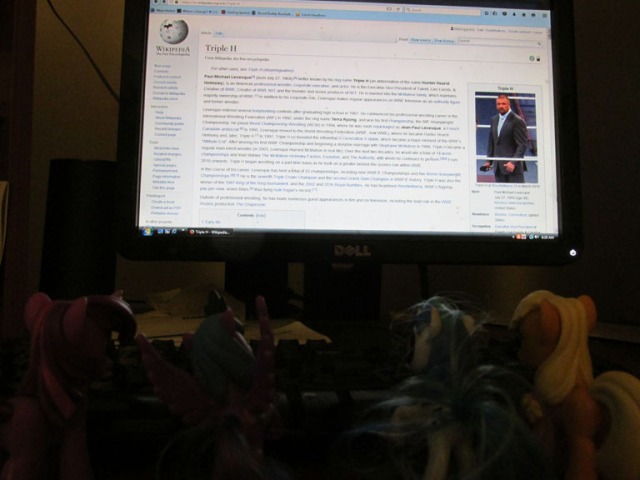 SCRATCHY: That fake ass shit?  Man, we run Milli Vanilli out on a rail, yet pump billions of dollars into a “sport” that is as phony as Rarity’s new boobjob!

TWILIGHT: It’s all done in the name of entertainment.

LUNA: Yeah, and so are these lameass posts on this blog.  That doesn’t justify either’s existence, though. 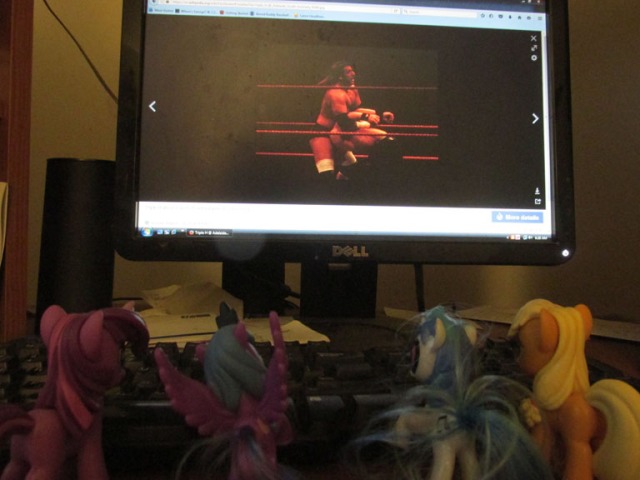 TWILIGHT: This is Triple H’s signature finishing move, “The Pedigree.”

SCRATCHY: To perform The Pedigree, simply grab your opponent in a way that renders his arms immobile and then ram his head into your sweaty, unwashed balls where he will pass out from the stench.  Pro tip: Cups are your friend. 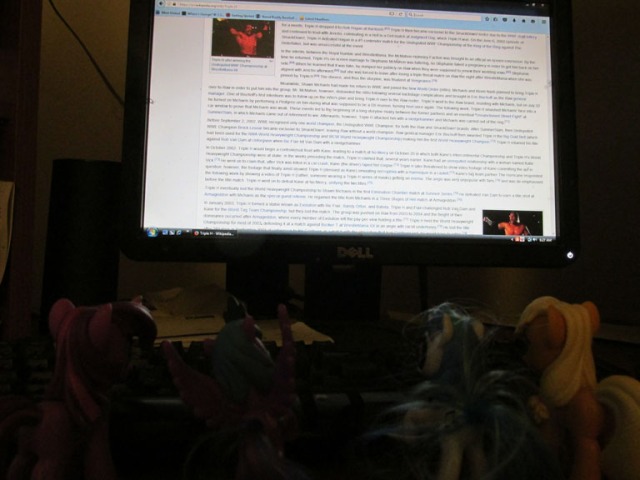 SCRATCHY: Dude!  He performed a nationally televised scene of necrophilia back in 2002 with a mannequin in a casket!  Andrew McCarthy would be proud.

AJ: He also attacked Shawn Michaels with a sledgehammer that year!  No way that was fake!

LUNA: What is this about taking sledgehammers to helpless opponents and engaging in breeding with lifeless dummies?  What kind of brutal, homo-eroticism is this to subject to a populace that is already corrupted and preverted beyond all hope?  I can not in good conscience choose this steroid fueled lunatic!

TWILIGHT: Well, OK then!  We’ve studied both parties thoroughly in this debate and it’s time to decide who the winner is so we can end this post before too many people can find the unfollow button.  I like Triple H! 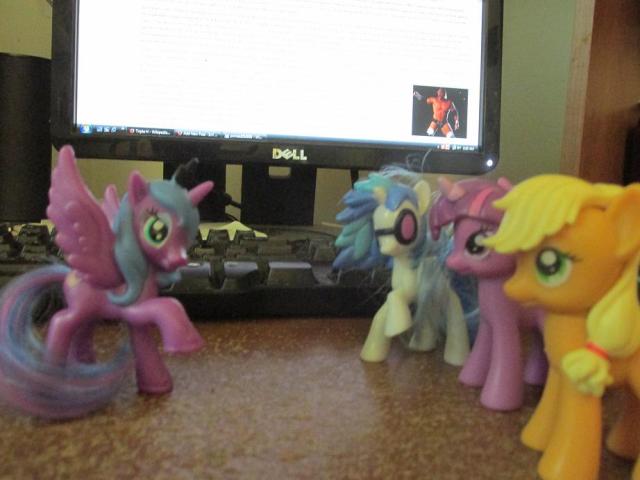 SCRATCHY: Even a corpse kissing phony is better than a grunge artist.  Triple H for the win!

LUNA: You… you heathens!  You dare go against your Goddess of the Moon who finds Local H to be slightly less reprehensible than Triple H!?!?  I’ll make sure your dreams are all haunted with images of glue factories and unpaid appearances at Bronycon! 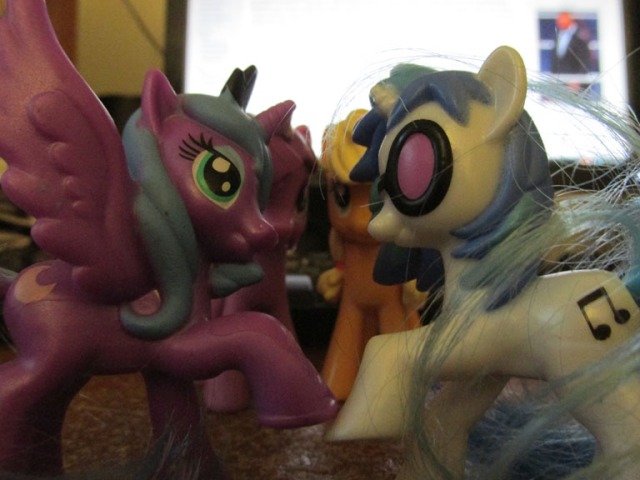 SCRATCHY: You know what, Your Majesty, I’ve about had enough of your royal lip!  You’re outvoted by us three to one, and there’s nothing you can do about it!

LUNA: Dream on, foolish mortal!  As a deity, my opinion counts for more than all three of you pitiful mares combined!  My decision is that Local H wins this Battle of the Etas, and that is FINAL!!!

TWILIGHT: (Whispering to AJ) Do you think they’re gonna fight?

AJ: I hope so!  I’ll go get the sledgehammer!

SCRATCHY: No need for that, Applesauce.  I’ve got the trump card in this battle royale.  Just let me have a crack at that keyboard….. now I wonder if your sister Princess Celestia has seen…… THIS!?!? 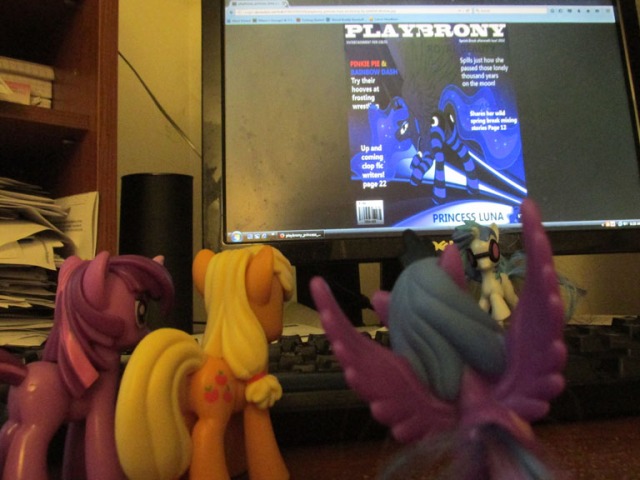 TWILIGHT: How did you keep this little secret hidden from the Royal Palace all these years, Your Highness?

LUNA: I…. I only did it to fulfill a fantasy of being a centerfold!  Really… I was young then, and…

AJ: You look really cute in those garters, Your Maj.

LUNA: Alright, enough!  Remove that hideous mistake from my past from the browser and clear the damned cache!  Triple H is the unanimous winner of Cutter’s query.  Now if you’ll excuse me, I have…… royal business to attend to in the palace bathroom. 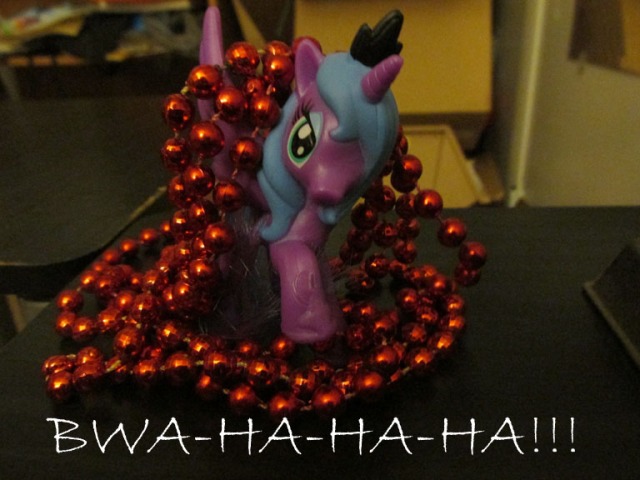 Scratchy was right all along!

Well…. that was an interesting expose into the worlds of 90’s alternative music, pro wrestling and pony prevertedness.  I’d like to thank the mares for bailing me out on this prompt… and of course, props go to Cutter as well for inspiring me once again to get the My Little Pony figurines off the shelf and onto my blog.  Be sure to tune back in next Friday for another prompt that will be sure to provide a shocking look at the frightening underbelly of my squirrelly brain…

Bored former 30-something who has nothing better to do with his life than draw cartoon squirrels.
View all posts by evilsquirrel13 →
This entry was posted in Friday Prompts and tagged applejack, brony, cutter, friday, grunge, local h, luna, music, my little pony, prompt, scratchy, triple h, twilight sparkle, wrestling, wwe. Bookmark the permalink.