If it’s Wednesday, that must mean it’s time for another peek through The Nest’s thumb-covered viewfinder in this week’s Picture Day Post!  Today, I’m going to give you the bird…. nah, I’m just kidding.  How about a nice, friendly goose instead? 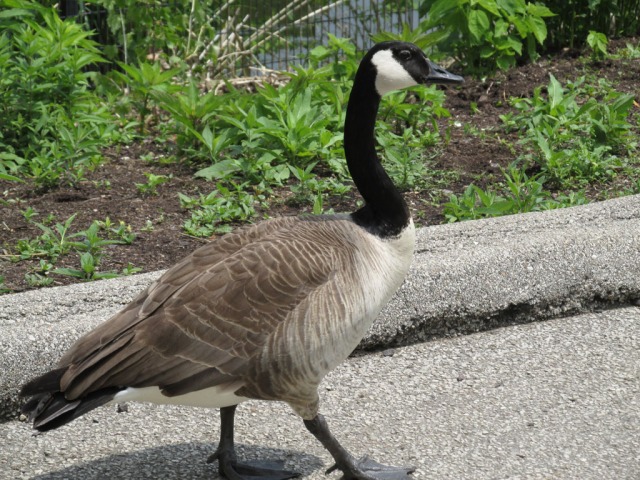 I’m hungry all of a sudden…

I ran into this fine, feathered friend during the trip I took to our local zoo back in May.  He was just strutting along out in the walkway, completely oblivious to the fact that he was walking right into everyone’s way and had attracted a crowd of rubberneckers who had apparently never seen a fucking goose walking around before.

Go ahead and touch the goose, little girl. You don’t really need all ten of your fingers…

I passed this oversized duck just as the group of boys dressed up like orange safety cones walked by.  They were prodded to continue moving along by their leashmaster, but the boy in the red shirt behind them was not about to let any shitty parental advice keep his curiosity and adventurous spirit at bay.  As the goose wandered into the greenery off to the left there, our modern day Tom Sawyer followed him.  I got my camera ready just hoping for an awesome Man vs. Nature scene as our fair weather fowl showed this Ritalin-deprived imp just what happens to little boys who try to make friends with vicious wild animals….

Instead, all I captured was Steve Irwin, Jr.’s last second decision to chicken out rather than risk being attacked and ending up in the hospital with the goose flu and a poked pecker.  The child lover in you would have been grateful that a potential catastrophe was avoided.  Obviously, I was disappointed instead.  Oh well, maybe next week I’ll have something with some blood and guts in it…

And I’ll get around to catching up on everyone’s blogs late, late, late tonight….

Bored former 30-something who has nothing better to do with his life than draw cartoon squirrels.
View all posts by evilsquirrel13 →
This entry was posted in Picture Day and tagged boy, child, goose, photo, photography, picture, wild, zoo. Bookmark the permalink.