Bashful’s six week stay at The Nest has finally come to an end, and the gang from the shelf gathers together to see their new friend off… 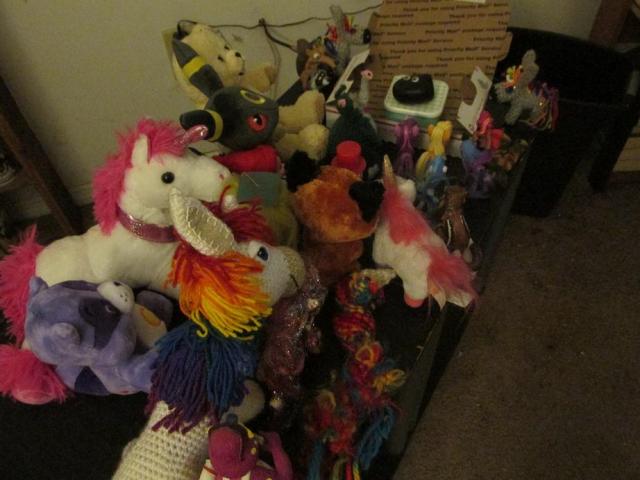 BUSTER: Been fun, you guess?  Why Bashful, these past six weeks have been like nothing else I’ve ever seen here in all of my incarnations!

TWILIGHT SPARKLE: Buster’s right, Bashful!  We really enjoyed having you around…

SCRATCHY: …To use and abuse!

SNUGGLE BEAR: Dude, you were awesome!  Not many outsiders can be such a good sport for our deviously devilish brand of entertaining ourselves!

UMBREON: Indeed… you were quite the playmate, and didn’t mind when we handed your hindquarters to you a time or fifteen…

SEYMOUR: Maybe you can take some of the street smarts you learned here to put that evil brother of mine, Don Juan, in his place!

BASHFUL: Yeah, I’ll keep that in mind (Smiles, imagining all of the havoc he and Don will unleash back at Bacon’s place this December)

OTHER CHILDREN: (Each putting a paw over the youngin’s mouth and whispering) SHHHHHHHHH!!!!  Nobody’s supposed to know about that! 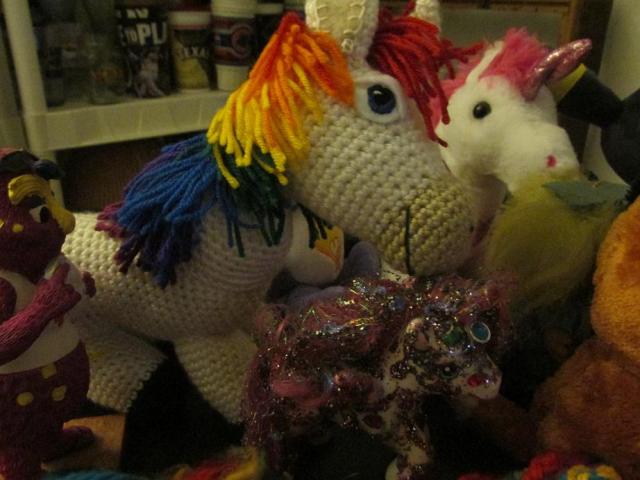 RAINBOW DONKEY: Come on now, dear.  Don’t be so hateful.  After all, when’s the last time someone actually hit on you in a bar…

SPARKLEPONY: Excuse me!?!?  Are you saying I’m not attractive enough to….

SPARKLEPONY: Someone’s gonna be sleeping out in the horse trough tonight…..

BASHFUL: I have to admit, I’m surprised by this outpouring of love.  I wasn’t expecting any of you to actually miss me!

SCRAT: Bashful, bro!  Do you realize how often we shelf critters appeared on this blog before you arrived on the scene last month?

FUZZYWIG: Almost never is the answer.  But you not only got us in the spotlight, you allowed us to show the creep who runs this blog just how much we deserve to have a larger role at The Nest!  We just found out we’re getting Fridays from now on to ourselves….. Shelf Critter Theater!

TWILIGHT: That’s right!  We’ll be used for more than just answering one of The Cutter’s prompt posts now!

LUNA: Feel free to stop by again if you want my autograph, or (flips the two finger phone gesture) just leave a message… maybe we’ll call.

SCRATCHY: Life’s been good to us so far!

BASHFUL: Wow, I had no idea I helped you guys out!  Geez, I just might let that go to my head and ask for some royalties…

MITZI: Oh, Bashful darling!  I’ve totally got to see you before you go!!!

Mitzi the Bimbocorn tromps through the crowd, squashing Buster under her huge, silicone enhanced chest as she stops at Bashful’s box to say goodbye…

MITZI: Buh-bye my pretty Bashful!  I’ll miss you most of all!

BASHFUL: Aw, shucks plasticorn!  I’ll miss you too!  At least I wrote down the address to your webcam!

Mitzi retreats back into the crowd, and Snuggle Bear seizes the opportunity for a free meal in the squashed possum…

BASHFUL: Awww, guys… and gals!  I’ve been all over the world and have seen a lot of things… but I have to say I’ve never been to a place quite like The Nest before.  Y’all are evil, demented, deranged, mischievous, incorrigible, and downright fucked up!  And I mean that in the best possible way!  I might not ever see any of you again, but you’ll always have a spot in this rock’s soft heart!  (Fights back a tear or two) I’ll miss y’all, but I’ll never, ever forget my amazing adventures here!

SPONKIE 1: Are you ready for us to close the box, Bashful?

BASHFUL: Yes.  Close this up before they see a big rock cry….

SPONKIE 2: OK, down goes the hatch! 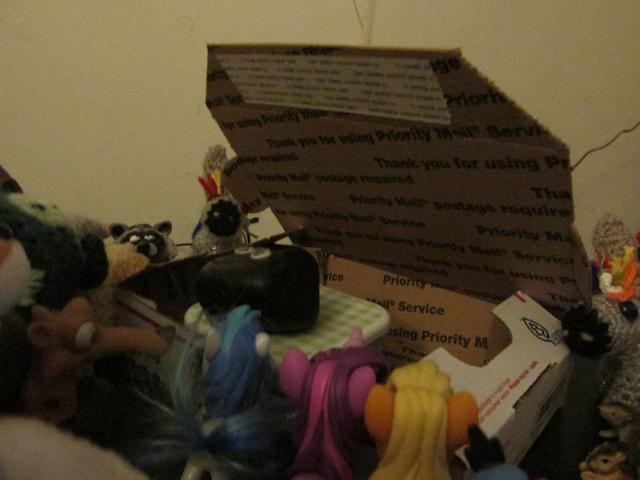 The Sponkies slowly lower the lid on Bashful’s shipping box as both he and the crowd of critters wave their final goodbyes…..

But the story doesn’t end here.

You know it doesn’t end here…..

The crowd parts to allow the late arrival to the farewell party a chance to impart her final goodbyes to Bashful….

Bashful begins to grab at the top of the box himself in a furious attempt to seal himself off from the skunk who has been his nemesis during his entire stay at The Nest…. but Rainy scurries on up to the box and uses her rain gauge to hold Bashful’s container open.

RAINY: Mr. Bashful.  You did NOT think you were going to sneak out of here before I could say goodbye, did you?

BASHFUL: Wellllll…….. to be honest…… I was kinda hoping you wouldn’t…….

RAINY: Mr. Bashful… in all of my years on this shelf, I have never, EVER seen anyone as naughty as you are!  You are evil, Mr. Bashful!  You are despicable and odious!  You are a cad and a con and a huge PREVERT to top it all off with!

The crowd erupts into applause as Rainy pulls Bashful in for a hug.

Bashful is obviously stunned, but returns the hug nonetheless… not tempting fate by using the opportunity to goose Rainy.

BASHFUL: Awwwwwww, Rainy.  I had a feeling you really liked me….

BASHFUL: And all those times you sprayed me… that’s how you skunks flirt, right?

BASHFUL: It’s alright, Stinky Pie!  I love you to, and if you’d like my number….

RAINY: That’s it, Mr. Bashful!!!  Sounds like you need one last dose of your medicine!!!!

Rainy turns tail towards Bashful and the nearby critters rush to scamper out of the range of fire!  Bashful acts quickly and pushes the rain gauge that was propping up the lid out of the way allowing the box to close safely and securely before he can get skunked yet again…

SNUGGLE BEAR: Awwww, dammit!  (Muffled by his chewing on Buster’s tail) I was hoping for one last laugh at Bashful’s expense!

RAINY: Is he shut away now?

SCRAT: Yeah!  I’ve never seen you miss your target before…

TWILIGHT: I think he’s already gonna stink for the next 15 years…

RAINY: Drat!  But at least there’s a bright side… 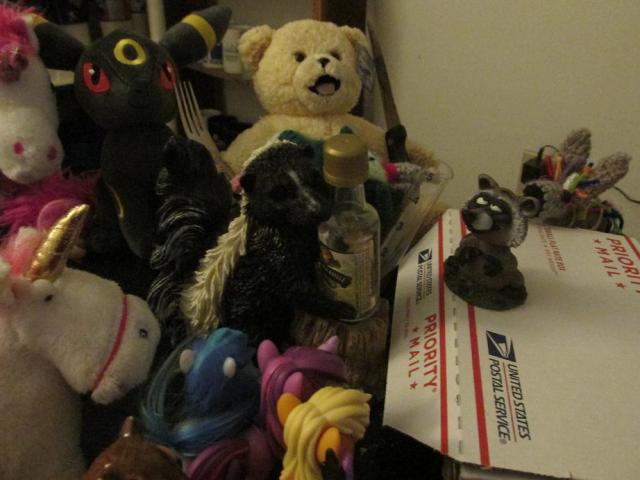 RAINY: Mr. Bashful was in such a hurry to leave, that he neglected to take along his bottle of booze!

FUZZYWIG: YES!  Now that the rock’s locked away, let’s REALLY get this farewell party started!!!!

And so the critters danced and partied and drank the night away while the guest of honor was trapped inside of his getaway box and could only listen in on all of the fun.  Safe travels back to Georgia, Bashful!

And thus brings an end to Bashful’s time at The Nest!  I hope you all enjoyed the look into my twisted mind he helped inspire, especially those of you who were unfamiliar with The Nest’s unique brand of humor before these Bashful episodes.  While my critters from the shelf will no longer have their favorite patsy to push around, thanks to the rousing success of this Bashful series, they will be appearing here regularly on Fridays to continue acting out all kinds of crazy shit for your amusement!  Hopefully the jolt of creativity I experienced with them can continue as a weekly feature…

A big thank you to Bacon for sending Bashful to “Camp Evil Squirrel’s Nest” for a six week stay, even though I was skeptical at the time that I’d be able to live up to the standard of adventure he’s had with other bloggers in the past.  Despite how it may have appeared at times, he made a lot of good friends here… and The Nest and its critters will always remember the time he spent with us! 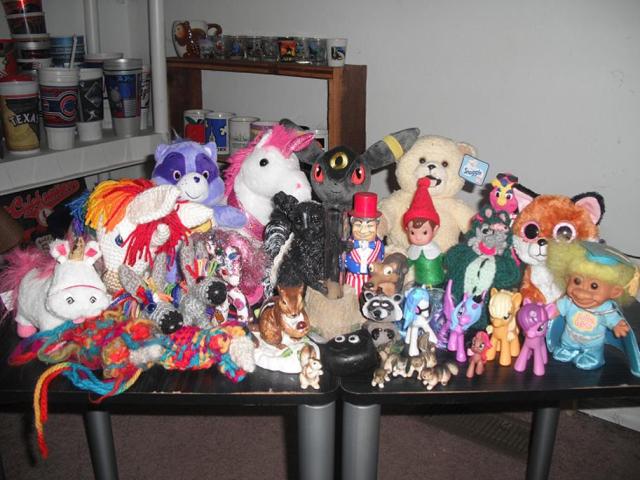 Bashful and Company one last time. Yes, I have issues…

Bored former 30-something who has nothing better to do with his life than draw cartoon squirrels.
View all posts by evilsquirrel13 →
This entry was posted in Bashful's Adventures and tagged adventure, bashful, farewell, goodbye, leaving, pet rock, rock, tearjerker. Bookmark the permalink.

37 Responses to Leaving The Nest