Up Up And Away 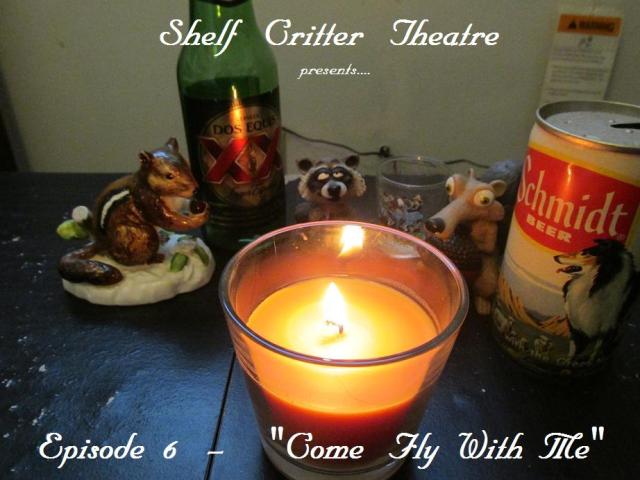 SCRAT: This was a great idea to go camping tonight, Fuzzy!

CHIP: Yep…. good buds, bitter beer, the great indoors.  It doesn’t get any better than this!

FUZZYWIG: Oh, it will definitely get better!  Just wait until 4:20….

This serene, manly critter camping scene was suddenly interrupted by something falling out of the sky and into their campfire… 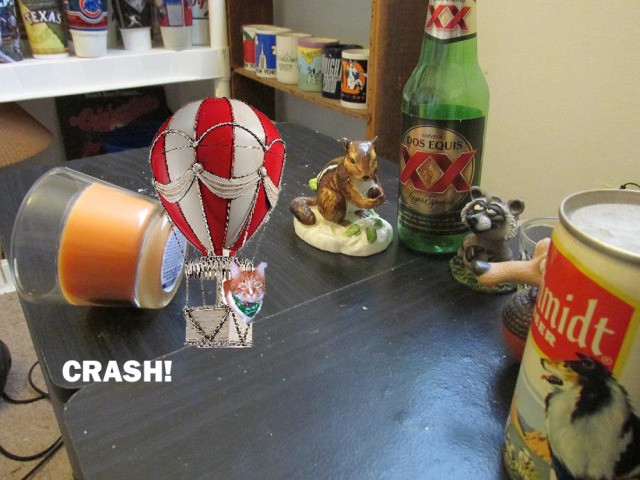 CHIP: That’s no alien spacecraft… that’s just a cat in a balloon.  The feline version of Steve Fossett.

FUZZYWIG: HEY!!!  Be a little more careful where you’re landing that thing!  Don’t you know that only YOU can prevent forest fires?

SAMMY: Sorry everyone… didn’t mean to cause a ruckus.  I’m getting one last grand tour of the world before I head off for the Rainbow Bridge.  I’d heard a lot of great things about The Nest from my friend Bashful, and was curious to check this place out for myself.

FUZZYWIG: Don’t believe any of it!  Not a single thing he said is true!

CHIP: Well anyway, welcome to our shelf here at The Nest, Sammy.

Meanwhile…. a little further down the road….

SCRATCHY: Dammit, this is why I hate playing Bottom Shelves And Dragons!

TWILIGHT: As Bottom Shelf Master, I shall now summon the next enemy…

TWILIGHT: Welcome Sammy!  Where are you headed.

SAMMY: I’m on my world tour before I retire to the Rainbow Bridge.

SCRATCHY: Careful about those bridges… you know they’re infested with trolls!

SAMMY: No, that’s not the Rainbow Bridge!  It looks more like this…

SAMMY: Well, it was nice meeting you all!  I’ll be on my way to see more of your friends….

LUNA: HALT!  Who is this interloper in my domain!?!? 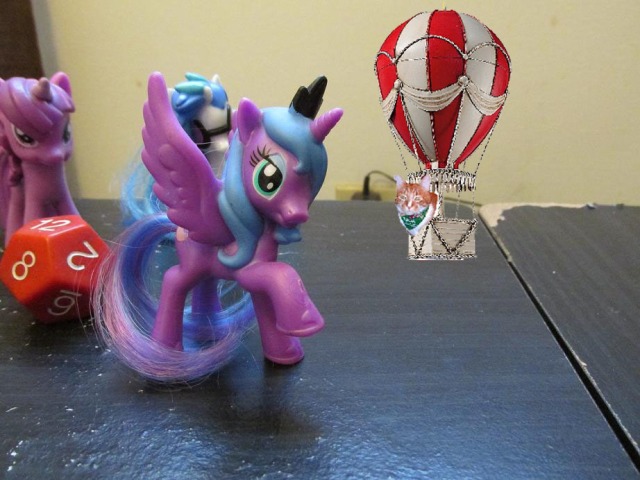 SAMMY: Well, then you can call me Prince Samuel of Catagonia then, Your Majesty!  I humbly request permission to explore your kingdom here.

SCRATCHY: Back off, Looney!  You don’t scare anybody around here anymore…

LUNA: Hmph!  This is no way to talk to a Goddess… but I guess I shall allow you passage.  Just stay out of the castle’s airspace…

With Luna’s generous blessing, Sammy continued on his journey of the land of the shelf critters…

SPONKIE 2: Yeah!  Say your Pokeprayers before we capture you as our own!

SHADOW: (Chuckling to himself) Oh, these kids.  They always think they can get the upper hand on a clever umbreon like myself.  Why don’t you two bored little sparklecorns turn around and capture the critter hovering behind you instead?

SPONKIE 1: You think we’re stupid enough to fall for that distraction?

SPONKIE 2: Naw, we were just ready to capture this stupid Poke…. (turns around)  Aw, POOP!!!

SAMMY: Sorry if I was any trouble.  I’m just passing through on my tour of the world!

SPONKIE 2: No worries, mate!  Hey, have you been to Uluru, Australia yet?

SAMMY: I don’t think so.  Can you tell me how to get there by balloon?

SPONKIE 1: Not a problem!  Just turn around!

SAMMY: COOL!  How many critters can say they’ve seen it snow in Australia?  Thanks a lot, friends!  I’ll be on my way now….

A little farther on down the road….

BUSTER: Well, what do we have here?

SAMMY: I’m Sammy, and I’m checking out the world before I head over to the Rainbow Bridge!

BUSTER: Hey, I’ve been to the Bridge myself many, many times!  They keep kicking me out, though…. probably all of that gas I get from living off roadkill and thrown away Big Macs…

SAMMY: Awesome!  Maybe you can help lead me there…

BUSTER: Sure thing, kiddo!  First off…. 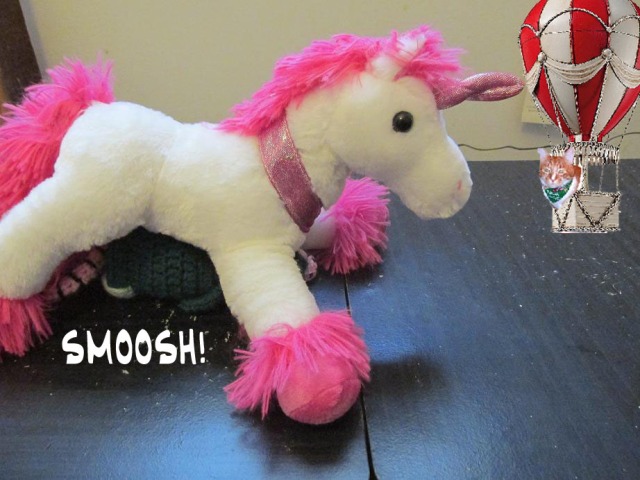 BUSTER: (From underneath the Mitzi’s massive, silicone enhanced chest) Oooooooooooh, my spleen!

SAMMY: Thank you!  And you are quite the attractive horsie, yourself!

MITZI: Awwwwwwwww, I’ll bet you say that to all the bimbocorns!  Wanna, like, stick around and get a few drinks?

SAMMY: I’d love to, but I can’t.  Gotta see the world before the Rainbow Bridge comes calling my name.  It was nice meeting you, though!

As Sammy continued on his journey through the shelf, he ran into many of The Nest’s other well-known denizens…

And some lesser known critters… 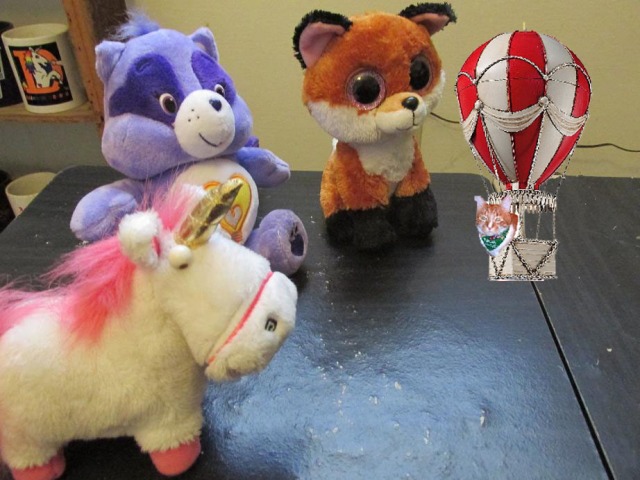 And some truly bizarre creatures…

After seeing all there was to see at The Nest, Sammy prepared to lift off for the next destination on his global trip.  But there was one small problem….

SAMMY: Oh no!  I seem to have lost a lot of the hot air in my balloon!  I won’t be able to get off the ground like this! 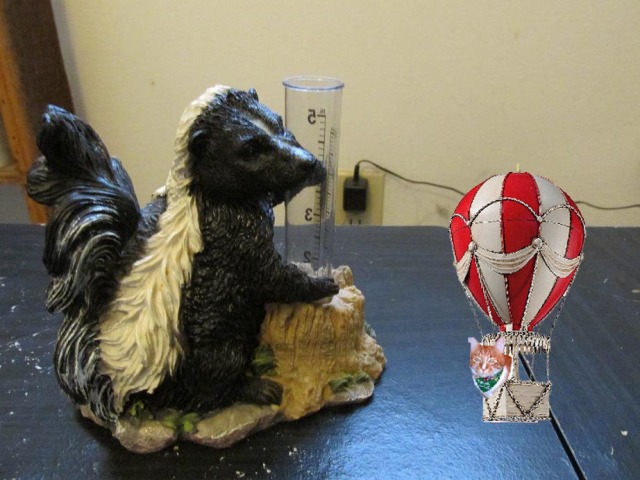 RAINY: You have no hot air in your balloon?  That’s a coincidence, I have no rain in my rain gauge.

SAMMY: I’ll bet I could get you some genuine Rainbow Bridge rain if you could tell me where I can find enough hot air to fly my balloon!

RAINY: Hmmmmmmmm, I have an idea…. 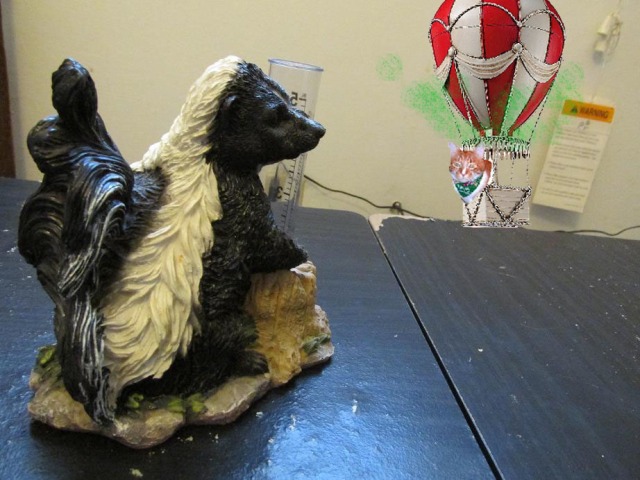 SAMMY: Are you sure this kind of “hot air” is going to work in my balloon?

RAINY: Are you serious?  Did you know they flew the Hindenberg all the way across the Atlantic Ocean on skunk gas?

Today’s episode of Shelf Critter Theatre was part of a Blog Hop put together to allow bloggers from all over the world to pay tribute to the ailing Sammy from One Spoiled Cat.  The concept was to introduce Sammy to someplace in our world where he would have liked to visit, and I hope he enjoyed the tour he was given of The Nest!  Sadly, the Rainbow Bridge came calling for Sammy on the same day as this tribute was scheduled… so for a second straight day, I must say goodbye to another of my anipal bloggers who has left us.  Happy travels, Sammy, and I know you will always be with us in spirit! 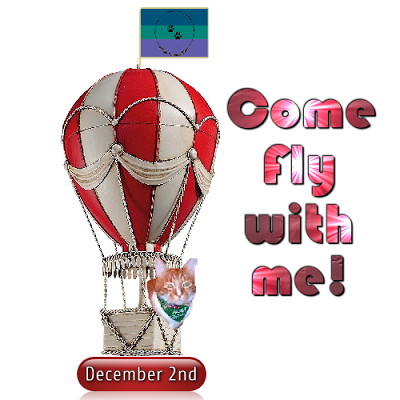 16 Responses to Up Up And Away