Squirrel In The Sky 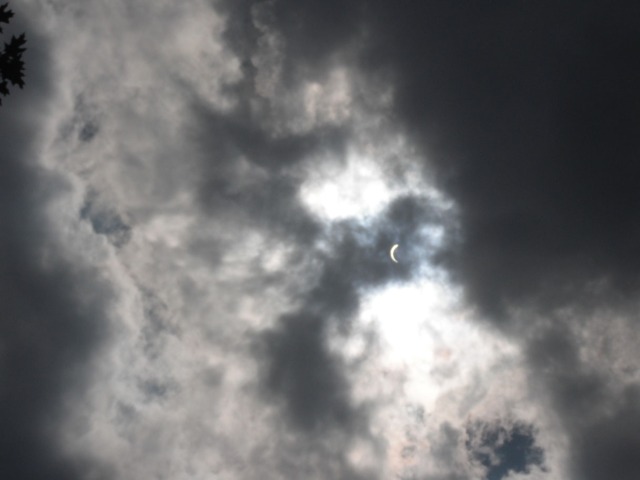 This picture is so last month.

I was going to post this last Saturday, but catching a rare glimpse of Batsquirrel kinda pushed this rather unique Saturday Squirrel entry onto the back burner…

Anyway, here is one of my photos of the August 21st solar eclipse that I plugged into two different posts that week.  It’s the infamous “cat claw” picture.  Despite me generally being a person who likes to scavenge the backgrounds of photos to see all of the unintentional things they captured outside of the targeted subject, I never noticed the strange “omen” that appears in this image until Phenny and crew from Easy Blog pointed it out to me in the comments of my eclipse expose!  Wake up your inner child and try to make pictures out of the clouds…

Do you see the squirrel?

I sure didn’t, and I don’t know how because it’s so damned apparent when you shift your eyes away from the cat claw that it isn’t the least bit subtle or abstract!

I spy with my little eye… a squirrel in the sky!

Now scroll back up to the un-traced photo and tell me you can’t see it, too!  That is so cool!!!!

Bored former 30-something who has nothing better to do with his life than draw cartoon squirrels.
View all posts by evilsquirrel13 →
This entry was posted in Saturday Squirrel and tagged awesome, cloud, cool, eclipse, formation, illusion, photo, photography, sky, solar eclipse, squirrel. Bookmark the permalink.

18 Responses to Squirrel In The Sky