The world is full of pathetic music that everyone but me thinks is the greatest thing to come around the bend since burnt Cheez Its.  That’s why I’m dedicating Wednesdays to expose these false idols for the fool’s gold they really are.  And The Nest is doing it in style with the Top 30 Iconic Songs I Just Can’t Stand countdown!  DJ Scratchy and her Sponkies have already helped me ruffle more than a few feathers with the first couple entries in this series, while also unearthing a secret army of folks who actually share my dislike of cherished classics!  Let’s see which way the wind blows this week as we finally tear apart a song from my favorite decade of all time….

Millennials would drop their smartphones in disbelief if I told them that just three decades ago, one of the most prolific hitmakers of the 80’s was a country hick from Seymour, Indiana who didn’t try in the least to mold himself into a perky looking pop singer.  John Cougar Mellencamp had us all dancing around our 50 pound boomboxes in the dying days of the Cold War with an oldies rock sound that was straight out of the haunted cornfields of the Midwest.  That abomination of a moniker was a product of the fact that John’s first record producer thought nobody wanted to buy an album from some guy named Mellencamp back in the 70’s when everyone was going gaga for simpler, flashier names like Engelbert Humperdinck…

And so the legend of Johnny Cougar was born.

In a series of moves that would put even the Jefferson Airplane/Jefferson Starship/Just Plain Starship wheel of name changes to shame… the artist formerly known as Johnny Cougar would eventually record under four different, but similar identities before finally dropping the Cougar nonsense from his name altogether in the 90’s.  For much of the 80’s, we knew FM radio’s most famous Hoosier as John Cougar Mellencamp.  And it was under that iteration that The Coug released an almost neverending string of kickass songs that can still rock out an iPod today.  Uh Huh, Scarecrow and The Lonesome Jubilee are three of the best back to back to back hit-packed albums any artist has ever released under any made up name! 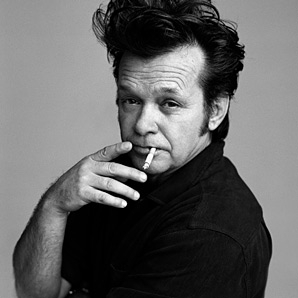 I’ll smoke to that!

But before Mellencamp became….. well, Mellencamp, he was still posing as John Cougar.  John Cougar did “Hurts So Good,” which is an awesome song.  But John Cougar also released this squishy cow pie of a ballad in 1982 that managed to become his first #1 and breakthrough hit… and radio has never stopped playing it 35 years later.

For someone as successful as John(ny) (Cougar) Mellencamp has been at creating hit singles, it’s hard to pick out just one that serves as that artist’s signature song.  But for Mellencamp, it’s probably this droning piece of schlock about two teenage lovers getting it on behind the shade tree.  What’s funny is that even John realized the song was a piece of shit, and only released it after the idea was sprung to him by guitarist Mick Ronson to make the part in the middle sound a bit more interesting than something that sounded like a folk singer in a coffee shop begging for change.  That middle, to me, is the only salvageable part of this four minute trip through the back roads of Hell… but of course, it’s only the “In The Air Tonight” style drum break that appeals to me.

Not John Cougar Mellencamp’s drummer. But he should have been…

Bored former 30-something who has nothing better to do with his life than draw cartoon squirrels.
View all posts by evilsquirrel13 →
This entry was posted in Iconic Songs I Hate Countdown and tagged 1982, countdown, disturbing sheep image, hate, iconic, jack and diane, john cougar, john cougar mellencamp, john mellencamp, songs, top 30. Bookmark the permalink.