Children Of The Unicorn

SPONKIE 1: Mommy!  When will we old enough not to have to go to day care?

SPARKLEPONY: Maybe when you are old enough to qualify for Social Security…

SPONKIE 2: But Mommy!  All of the rest of the foals in our class are latchkey critters!

SPARKLEPONY: Put a feed bag in it!  You are both my babies, and I will continue to treat you like babies for the rest of your lives!

TWILIGHT: Good morning, Mrs. Sparklepony!  How has work been treating you?

SPARKLEPONY: It’s getting harder and harder to squeeze into those little orange shorts every day.  But someone’s gotta bring home the hay since my worser half is only good for entertaining at girls birthday parties.  Take good care of my l’il ones!

TWILIGHT: Oh, I’m sorry Mrs. Sparklepony… but I have an important tax credit class to attend today.  And my partner Applejack called in sick with the possum trots, so it’ll just be my new trainee in charge of all the rugrats today!

SPARKLEPONY: Ummmmm….. who is this new trainee?  And are they qualified to….

MITZI: Like, I forgot what we’re supposed to do with these nasty poopoo diapers after we change them, Miss Twilight.

SPARKLEPONY: I think I’ll be calling the Division of Family Services…

TWILIGHT: No no, Mrs. Sparklepony!  Trust me!  Mitzi is perfectly capable of supervising young children.

MITZI: I am!  I’m, like, the most awesome critter sitter in the whole wide world!

Sparklepony shakes her head and leaves her twins in the expert care of a bimbocorn.

TWILIGHT: I’m leaving, Mitzi, so you’re the adult around here now!  Remember everything I taught you…

MITZI: I totally will, Miss Twilight!  I want to be a good mommy for my little babies, and this will be, like, awesome practice for taking care of kiddies!

TWILIGHT: So long, and good luck!

Twilight leaves Mitzi in charge of the juvenile insane asylum…

MITZI: This should be a total piece of cupcake!  (Turns to the boy Sponkie who is humping her leg)  Well, aren’t you just, like, a real total doll baby!

SPONKIE 1: I hope Mom never takes us out of day care now!

SPONKIE 2: Knock it off, bro!  Or Mommy will have to take the riding crop to you again…

REX THE RAINBOW DINOSAUR: Miss Mitzi!  I’m bored!  Do you have any toys to play with!

MITZI: Oh, you totally know Mitzi’s always packing some toys to play with!  Let me go get my Cucci purse…

SPONKIE 2: Ummmm….. how about you read us a story instead?

The kids all jump up and down and squeal like little pains in the ass at the prospect of story time. 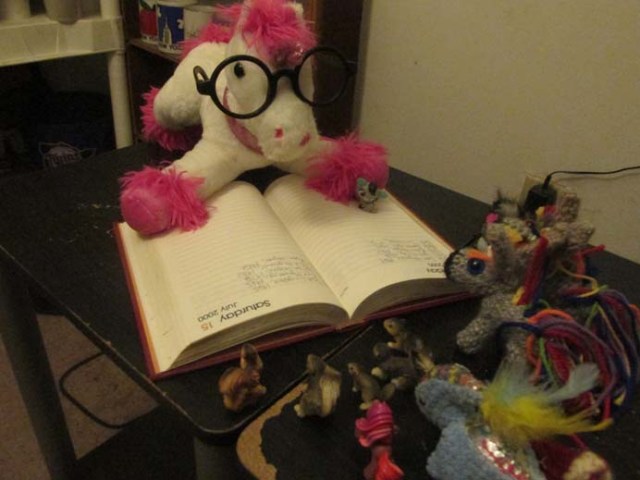 MITZI: Let’s see…. once upon a time, there was a pool boy named Fabio who was working for the freshly divorced Miss Nastysnatch.  While watching the beefcake Fabio work to fish a Baby Ruth out of her pool, Miss Nastysnatch was unable to control her desire to put her hand down on her…

SQUIRREL KID 1: Miss Mitzi, are you sure this story is age appropriate for us?

MITZI: I’m sorry, little squirrely whirly.  Is, like, vajayjay too big of a word for you all?

SQUIRREL KID 3: I heard Suzie showed Johnny her vajayjay one time, and now he’s blind as a bat!

SQUIRREL KID 4: Could you use that word in a sentence?

TINA: You boys are so stupid!  Let me show you what a vajayjay is…

MITZI: OK, I think story time is all done now.  Now it’s time to, like, go play outside!

KID 3: It smells AWFUL!  (Crawls inside the bag) I wanna taste!

KID 4: This nice critter is letting us try some vaj…. I mean, MARIHUANA!

MITZI: No no no!  Bad squirrelies!  That is a drug, and it’s, like, totally bad for you and stuff!  Remember what Officer Friendly used to say!

FUZZYWIG: I just sold him half an ounce of this stuff last night…

Mitzi makes good on the slogan…

FUZZYWIG: Well, there just went my ribs into a fine powder.  I never thought being crushed in cleavage would actually a bad thing…

After releasing the drug dealer from her atomic hug, Mitzi takes the MARIHUANA away from the curious children and throws it in the recycling bin…

MITZI: Oh! Em! Gee!  What happened to you, little grrl?

TINA: I got bit by a mean old dog! 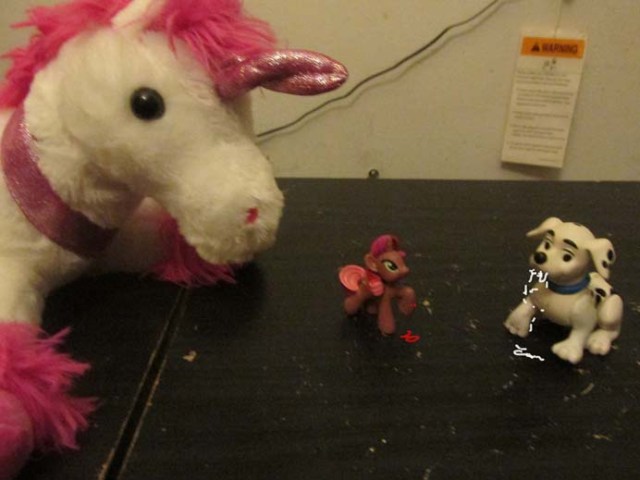 MITZI: Ooooh!  He’s, like, totally drooling over us, grrlfriend!

MITZI: Oh.  Well, would you like Miss Mitzi to kiss your booboo better?

TINA: I’d like to keep your STD’s away from my open wound if you don’t mind.  Maybe you should call the dog catcher? 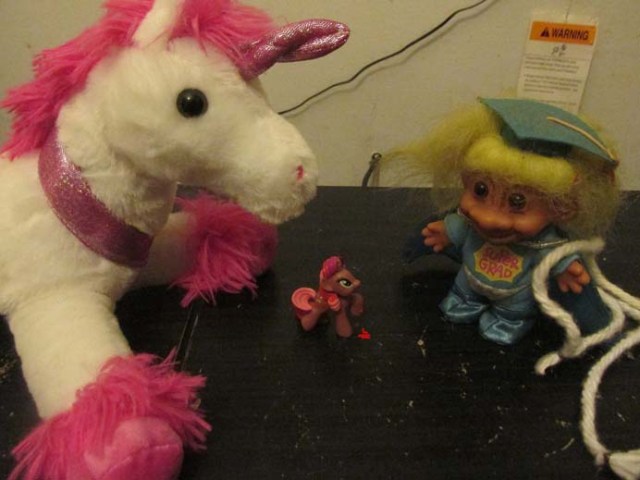 MITZI: Can you catch the doggy that bit poor Tina’s hoofie woofie?

TINA: Yeah!  And he’s foaming at the mouth too!

TROLL: That means that once we catch him we’ll have to cut off his head and dissect his brain to check for rabies.

MITZI: He, like, had four legs, a tail, and was as kyooot as can be!

With that accurate description in hand, Troll goes out to bring this rabid critter to justice…

BUSTER: I believe there must be some mistake…

TROLL: Yeah, yeah…. let me know about it while I’m sawing off your skull. 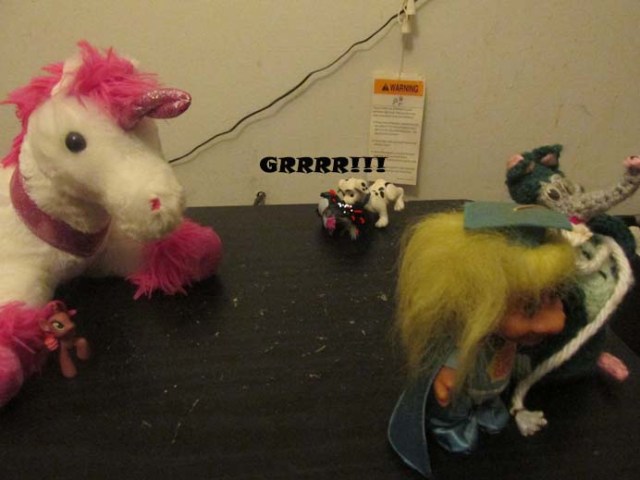 Troll leads the unfortunate possum away to his completely expected doom.  And now, it’s time for the most funnest activity at day care….

The only good child is a child who’s sound asleep….

SPONKIE 1: Miss Mitzi!  Can I sleep here with you?

MITZI: Oh, you totally can you adorabubbly little horsey!

Mitzi lets the lovesick colt rest up against her leg, and soon enough, even Mitzi falls asleep…

SNUGGLE: Fuck yeah!  It’s a good thing I ignore that stupid law that says I have to stay at least a mile away from a place like this.  I’ve got the pick of the litter, and nobody’s around to stop me! 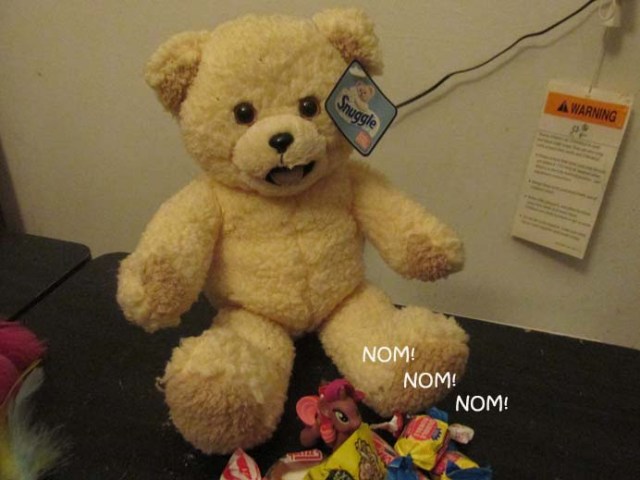 SNUGGLE: It’s so easy sometimes, I’m ashamed of myself.  Now to get this delicious little morsel back to my windowless van….

SNUGGLE: Well, well!  You are a little one indeed!

STINKER: Please don’t make such a fuss about me.  I’m very shy…

SNUGGLE: Well, there’s no reason to be shy around such a trusted adult as myself!  Why don’t you come sit up in my lap here and have a piece of candy! 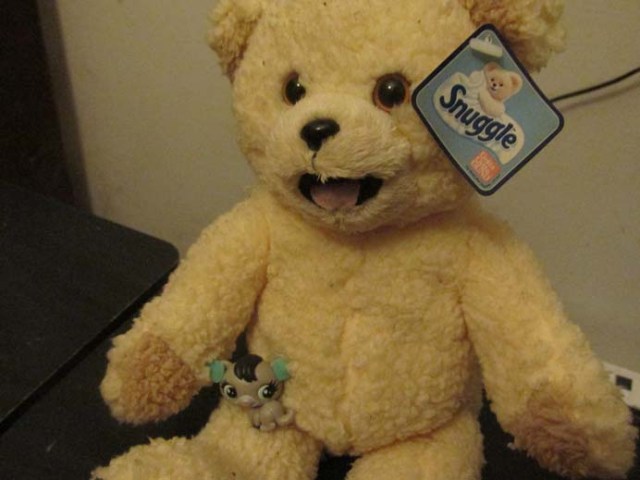 STINKER: Yes, I’d like to do that, thank you.

SNUGGLE: The shy ones are always the best ones!

STINKER: That’s true…. and we’re also the least likely ones to do something like this….

With absolutely no warning, the tiniest paw in the world makes a crushing direct hit on Snuggle Bear’s fluffy jewels….

STINKER: I may be timid and antisocial, but I’m not about to let a prevert like you mess with Miss Mitzi’s children!  Now are you going to disappear, or do I have to ram one of Miss Mitzi’s big girl toys up your….

Snuggle Bear doesn’t even wait to hear L’il Stinker finish her threat.  He’s gone and back outside of the predator safe zone before you can say “Judge Roy Moore.”

MITZI: (awakened by the pathetic ursine squealing) Good grrl!!!  I always knew you had an outgoing, nutcracking side to you! 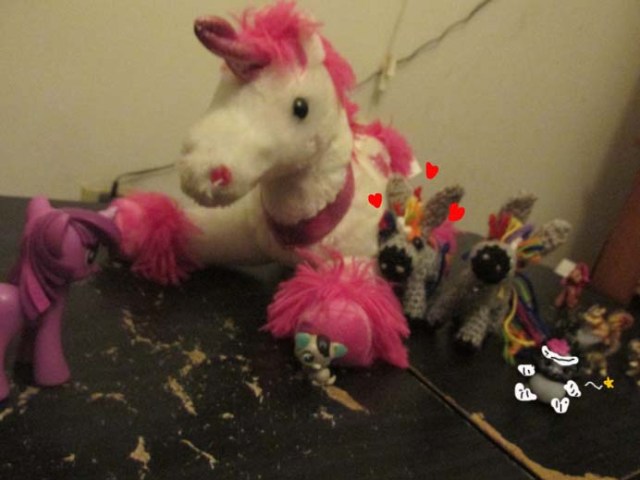 TWILIGHT: I’m back!  So, how did everything go on your first day alone, Mitzi?

MITZI: It went totally okie dokie, Miss Twilight!  Me and the kidlets had so much fun together!

Stinker scores another timely kick to the nads…

TWILIGHT: Excellent!  You’re going to make such a great addition to our staff!  And be such a wonderful mother to your hatchlings!

Mitzi had a smile about as wide as her stance on a Saturday night all the way back to her stable that evening, thinking about how well she was learning the basics of child care in advance of her parenthood…

MITZI: You two are gonna be the luckiest little baby wabies in the whole wide wonderful world!  Mama Mitzi’s gonna be able to take such good care of you both!  And don’t you worry if something comes up that Mommy can’t handle…. I’ve, like, totally got the unexpected covered!!!  Don’t we, little grrl?

16 Responses to Children Of The Unicorn