With The Greatest Of Ease 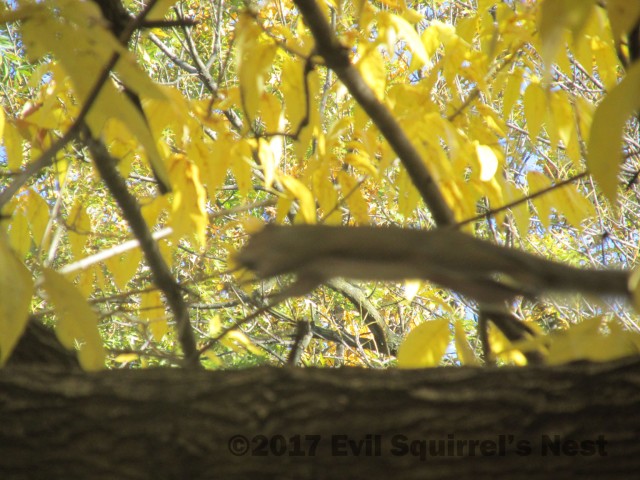 Who says only flying squirrels can fly?

The subject of this photo is out of focus, but I don’t care.  When squirrels get riled up and

chase each other at breakneck speeds through trees, it turns sciurine photography into a total game of chance.  Aim your camera where you think there might be a squirrel once the shot goes off, and repeat until said squirrels move out of sight or you get so frustrated that you slam the camera on the ground and go back home. Every once in a while, with enough persistence, you’ll get lucky and manage to catch one of the speed demons as he’s whizzing by you… and maybe even catch some death defying acrobatics at that.

Yes, the squirrel in this photo is almost blurred beyond recognition because my cheap camera can’t realistically catch anything breaking the sound barrier… but you can clearly see he’s in a mid sprint leap on a tree branch that is much higher off the ground than you would be comfortable with.  You can actually make it out even better as a thumbnail…

These guys are simply amazing when they’re tearing through the trees like the daring young man on the flying trapeze.  Here’s to this week’s Saturday Squirrel for putting on a show well worth the price of admission, even if he refused to stop and pose for selfies…

Bored former 30-something who has nothing better to do with his life than draw cartoon squirrels.
View all posts by evilsquirrel13 →
This entry was posted in Saturday Squirrel and tagged acrobat, adorable, amazing, blurry, cute, fast, flying, jumping, leaping, photo, photography, running, squirrel, tree. Bookmark the permalink.

12 Responses to With The Greatest Of Ease