The Most Horrible Story Ever Told 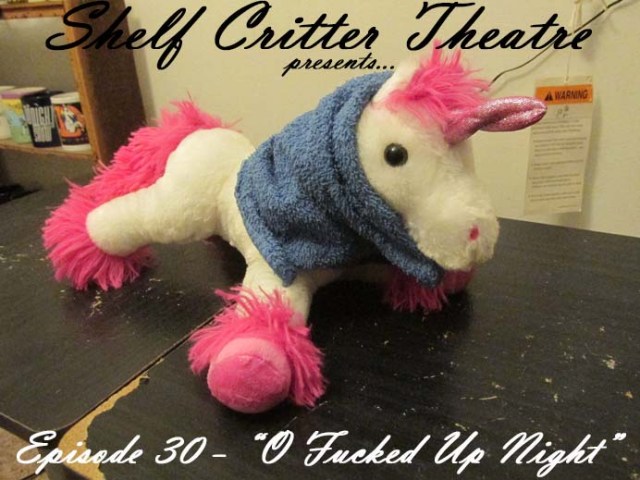 MITZI: Brrrrrrrrsies!  It’s, like, so cold I can’t even feel my nipplies! (Believe it or not)

Suddenly, a voice called out to her…

VOICE: You are the chosen one! 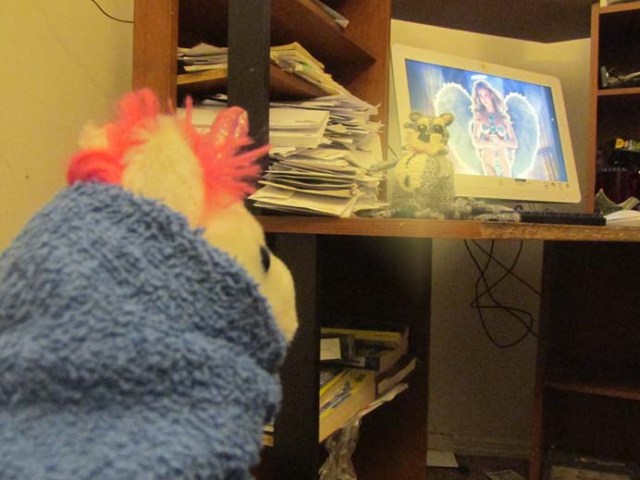 EVIL SQUIRREL: I’m God.  What, you were expecting Morgan Freeman or George Burns?

ES: I created Shelf Critter Theatre, thus I am YOUR God!

ES: You have been chosen by me to carry the shelf’s saviors, my only children on this mortal world!

MITZI: Are you gonna pay, like, savior support to this single mommy?

ES: Of course I’m not!  Go to the town of Shelflehem to give birth to God’s children.

MITZI: That’s, like, miles and miles away!  I can get good prenaval care at the hospital here!

The sciurine deity vanishes and leaves Mitzi in the dark…. with a sudden, noticeable baby bump.  The Virgin Mitzi sets off…

Stop laughing!!!  OK, the Promiscuous Mitzi sets off for the town of Shelflehem.  She stops at the Holiday Inn hoping to get a room for three…

MITZI: I, like, need a room!  Preferably one with a big girl sized bed and a jacuzzi.

RAINY: I’m sorry, but the only room we have available has a vibrating mattress and bedbugs.

MITZI: I’ll take it!  I’m going to have babies in there!

RAINY: The hell you are!  Our housekeepers don’t get paid to clean up after those kind of bodily fluids!

RAINY: You’re screwing a deity now!?!?  Did you run out of mortals?

RAINY: I’m sorry, but you’re gonna have to leave…

SPARKLEPONY: I came down here to complain about the dirty bathroom, the heater not working, and the Magic Fingers is out of order!  I demand a refund!

RAINY: I apologize for your inconvenience, ma’am.  Will you settle for an extra mint on the house?

RAINY: You’ve got it…

Mitzi sees her way out of the skunky motel and makes her way down to the Red Roof Manger where she has more success in getting a room for her and her new savior eggs! 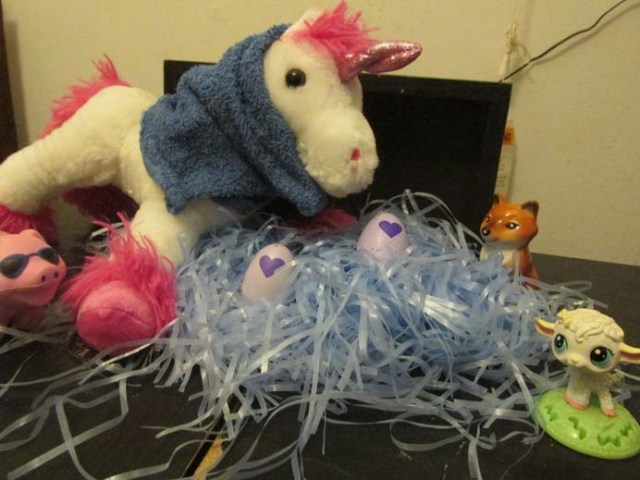 MITZI: These holy kiddies will help deliver us from starvation!

MARY: That’s SALVATION, you airhead.  And why was I not chosen for the lead in this story?  Baaaaaa…

FOX: What do I say again?

Meanwhile….. to the east.

FUZZYWIG: Ah, it’s good to be a king.

SCRATCHY: Hush up you two!  Check out the astrology report!

SCRATCHY: It says there’s gonna be a big bright star in the sky to the west tonight!

CHIP: That must be the star mentioned in the ancient prophecies!  Two new kings are to be born!

SCRATCHY: Exactly!  And we need to be there!  Good thing it’s close enough to Christmas that we can get some cheap gift sets for our saviors!

CHIP: Let us follow the star and adore them!

FUZZYWIG: How are we gonna even gonna get there.  There’s too much light pollution to see the stars in the sky anymore… 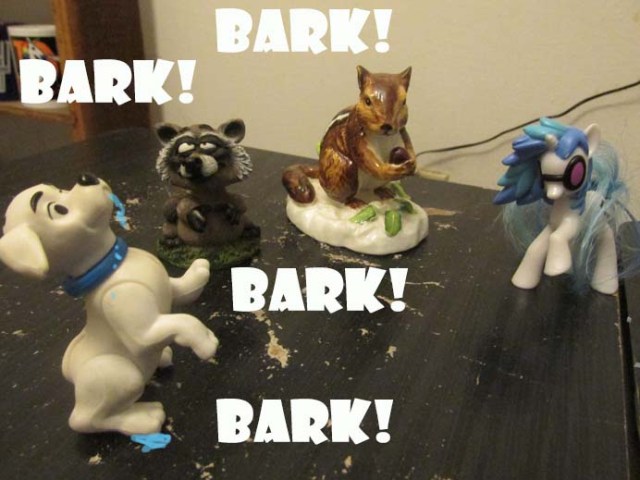 SCRATCHY: I’ll bet that pooch has the nose to lead us there!

FUZZYWIG: I was going to sell him to Camel Hut last week…

And so the three wisecritters followed Fleabag on the scent of the shelf’s newest kings.  Nobody to cheer them along on this road other than a cute little innocent squirrel… 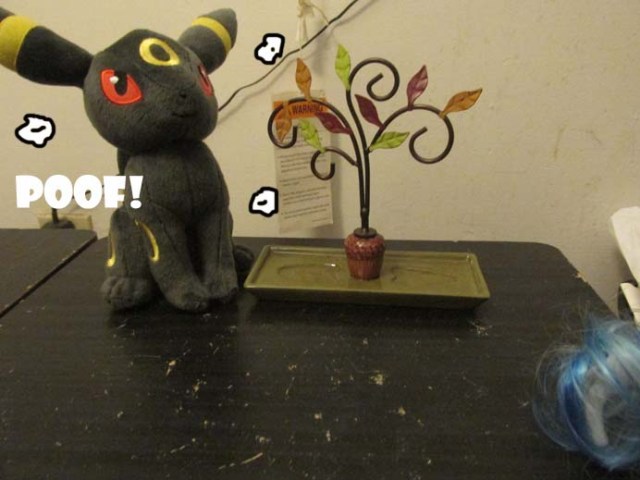 SHADOW: I must let Uncle Herod know of this threat to his reign!

The Umbreon quickly disappears, as shapeshifting Umbreons tend to do…

Uncle Herod, the ruler over the shelf, was consulting with his harem at the time…

UNCLE SAM: This is the life.  Nothing to do but fire off idle tweets and hang out with my Arabian mares…

Shadow suddenly appears in front of the corrupt leader…

SHADOW: The three wisecritters to the east have just set off to worship the new kings that were foretold in the prophecies.  You’re about to lose your job…

SHADOW: Rumor has it the mother of these children is the Virgin Mitzi…

SHADOW: …and the father is unknown.  Perhaps you’d like to have the royal treasury garnished for the next 18 years…

UNCLE SAM: LIKE BLOODY HELL!!!  Call for my royal generals!!!

SNUGGLE: Yo!  We’re at your service, dude!

UNCLE SAM: Somewhere to the west are two savior eggs that are a threat to my kingdom!

TROLL: And your point, sir?

UNCLE SAM: I want those eggs on my next breakfast plate, or I just might decide to indulge in fried Troll balls instead!

SNUGGLE: You can count on us, dude!

UNCLE SAM: Stop calling me dude!  I’m your king, and you’ll address me as…

SNUGGLE: Whatever, dude!  We’re off to catch those saviors!

SNUGGLE: Let’s try heading towards Shelflehem… they’ve got the best little whorehouse in the Middle East there!  For a good time, call Mary Magdalene!

SNUGGLE: Dude!  What are you….

SNUGGLE: Dude!  That’s not the savior we’re looking for!  God would never send a possum to earth to die for our sins… they can’t even walk across the street without getting killed let alone walk on water!

Meanwhile, back in Shelflehem, the wisecritters have arrived at the manger scene.

CHIP: Greetings!  We three kings from the east have followed the star…. er, mutt to our newborn kings so that we may adore them!

MITZI: Ooooooh!  Mitzi can, like, use some adoring as well!

FUZZYWIG: Aren’t you supposed to be a virgin?

CHIP: We have brought gifts for our saviors!  I present to you….. gold!

MITZI: That’ll get a pretty penny down at the pawn shop!  I’m totally getting a mani/pedi before my next flight to Egypt!

FUZZYWIG: I was gonna get some myrrh…. whatever the hell that is, but Mecca was out of stock.  So I present to our saviors the gift of…

MITZI: Oh dear…. wacky weed!  What would Jesus do?

FUZZYWIG: Puff, puff, pass of course… and the joint would never end.

CHIP: What about you, Scratchy?

FUZZYWIG: Yeah, where’s your gift for our new kings? 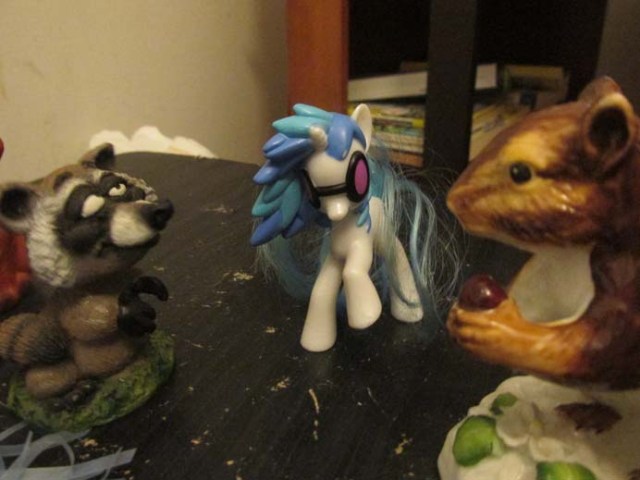 SCRATCHY: Dudes!  I totally got his covered! (Snaps her hooves)

MITZI: Wow!  Like, rock on!  I totally love these gifts of gold, Mary Jane and Frankenstein!  Thankies so much, oh wise guys!

TROLL: And now you will all prepare to DIE!!!! 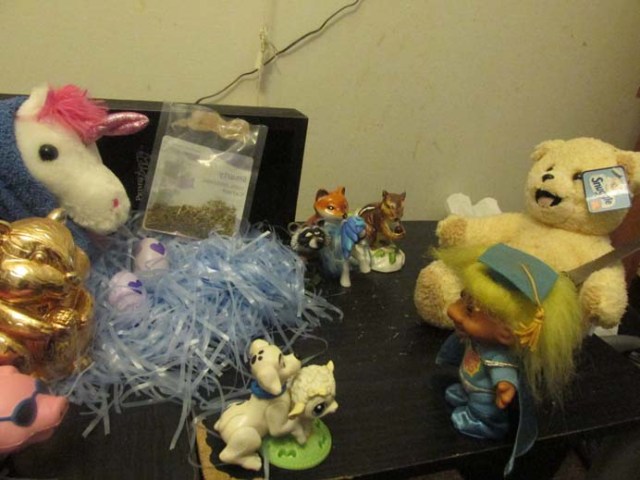 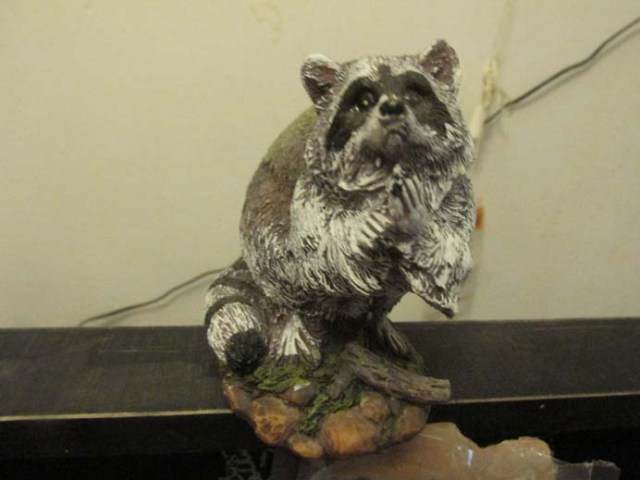 RICKY: (Praying, as he always does) Dear Lord, I know this entire blasphemous play has condemned all of us critters, and maybe the whole world to an eternity in hell for being a part of it, but I beg of You for a moment of forgiveness…. may we have a deux ex machina please!?!? Amen!

FUZZYWIG: Well, is the Big Squirrel gonna come through?

RICKY: He says the little drummer boy is on his way as we speak….

BIG SCRAT: Shall I play for you?

Troll heads for the hills, but Snuggle Bear can’t get away before he finds his fuzzy ursine ass bent over the “little” drummer boy’s drum…

BIG SCRAT: Yeah, the ox and lamb are gonna enjoy keeping time to this!

SANTA: And that’s the story of the true meaning of Christmas! 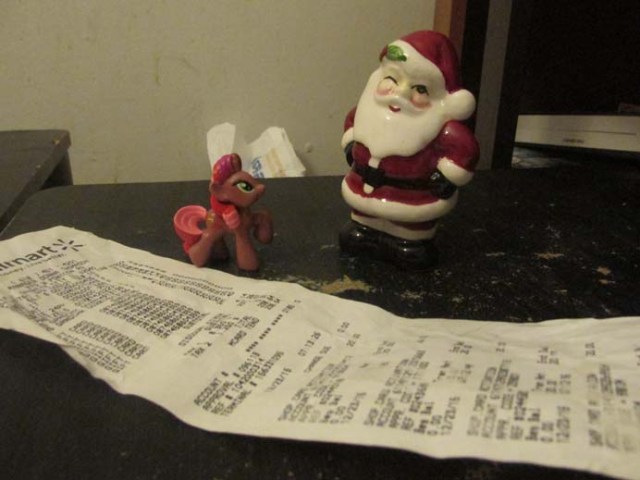 TINA: You’d make up any excuse not to get me all of the cool stuff on my wish list this year!  Virgin unicorns and saviors….. really!  Christmas is all about ME ME ME!!!!

Don’t forget that Mitzi’s baby shower is next Friday!  If you want to “give” a gift to be featured in next week’s episode, it needs to be in my email by next Thursday night!  See this post for details!

24 Responses to The Most Horrible Story Ever Told