It’s time for another Thursday backstage meet and greet with your favorite stars of Shelf Critter Theatre.  This week, we’re going to take an extended peek at the Shelf’s spunky little sparkplug of a filly Tina… and hopefully be able to do so without digging into Uncle Snuggie’s secret stash of Polaroids…

Is this how you wanted me to pose on your car, prevert?

SHELF PERSONALITY: Tina plays a seemingly innocent, yet very streetwise young girl who know what it takes to stay out of real trouble in the very corrupt Shelf Critter Theatre universe.  A real pip, she has a side that’s even wilder than her Aunt Scratchy… and is a heartbreaker for all of the little boys (and even big boys) who try to win her love.

You all can look, but don’t touch!

RUNNING GAGS: Tina’s most common misadventure is running into the gang’s creep, Snuggle Bear… who has an unhealthy and completely illegal crush on her.  Tina loves to string him along… even seemingly falling for Uncle Snuggie’s candy bribes.  Tina is extremely excitable, and bravely stands up to even the most hideous of threats the Shelf may throw her way… 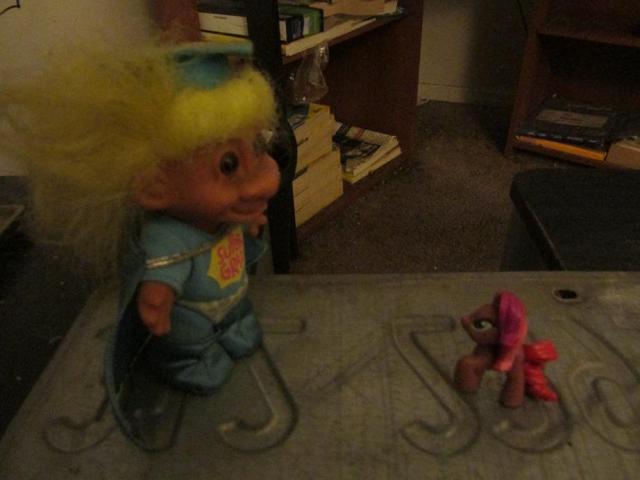 Get out of my way, Bedhead!

Tina claims to always smell like Disney Princesses bubble bath, and is usually listening to her Foalz Bop CD… which she likes much better than the music her Aunt Scratchy prefers.  Tina is a greedy little thorn in the side of the Shelf’s Bad Santa.  She also looks up to Mitzi, who… as you would expect, is a terrible influence on her…

ESN PREMIERE: Tina was first pulled off the shelf to play the crippled young Cratchit child in my five part parody of A Christmas Carol back in 2015.  Her personality in that story was that of a kindhearted little girl who was slowly dying from a dreaded unicorn disease that was causing her horn to grow backwards into her head.  That may be one of the must fucked up situations I ever accidentally created…

Or maybe it was an episode of My Two Moms.

WHAT’S IN A NAME: Like a number of her castmates, Tina’s name came from her appearance in my besmirching of Dickens.  Since she was playing the Tiny Tim role… I changed the name to Tiny Tina for a girl.  When she began appearing in later posts, I simply used the name Tina for her.

ICONIC SCT ROLE: As great as Tina was at playing Little Red Riding Hood, I have to give the edge here to her series of adventures walking to school in the episode “I Missed The Bus.”  Just about every classic Tina encounter can be found in that post… including making off with all of Uncle Snuggie’s candy.

So easy, it’s like taking candy from a prevert!

WHAT IS SHE?: Tina is a mini My Little Pony figurine that came in one of those collectible blind bags that are all the craze these days.  While the more well known MLP characters of today were supposedly in that collection, Tina was not one of those rare to find more famous ponies… making the whole thing kind of a ripoff.  She was then a generic unicorn thrown into the series named Cherry Spices… who apparently (Yes, I had to look it up) later made her way into the canon of the MLP cartoons.

WHERE DID SHE COME FROM?: The blind bag was an impulse buy one morning after work at Mecca in 2015 when I was getting other stuff I actually needed.  Three years ago, the blind package mini collectible trend was just getting started… so it seemed like a novel idea and I put out about three bucks to buy one.  It was three dollars well spent to get a pip like Tina… 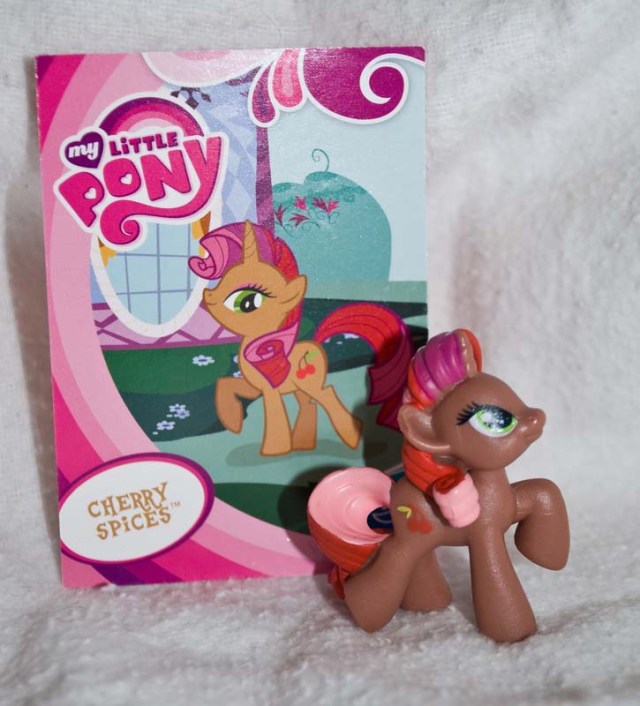 You gotta love that strut!

CAN I GET ONE TOO?: If you can Google “MLP Cherry Spices,” you can find all kinds of little Tinas for sale for various prices.  She may even be in some of the current minifig sets you’ll find in your local toy department… though I’d imagine only the 2015 version would look exactly like my Tina.

I want every design of MEEEEEE for Christmas, Santa!

Bored former 30-something who has nothing better to do with his life than draw cartoon squirrels.
View all posts by evilsquirrel13 →
This entry was posted in Meet The Critters and tagged character, cherry spices, critter, my little pony, shelf, theatre, tina, unicorn. Bookmark the permalink.