CHIP: Hello everyone out there in Blogville.  Since ES can’t come up with anymore good Shelf Critter Theatre stories…

FUZZYWIG: Not that he ever came up with any good ones in the past…

CHIP: …We decided to spend this Friday addressing some of the fake letters that fake fans of our show have fake sent us.

FUZZYWIG: I don’t know if these letters are fake, Chip.  The envelope glue smells awfully real…

CHIP: Are you seriously trying to get high huffing envelope glue!?!?

FUZZYWIG: Don’t knock it until you’ve tried it, dude!

CHIP: That will be never, buddy.  Will you please hand me the first reader letter…. 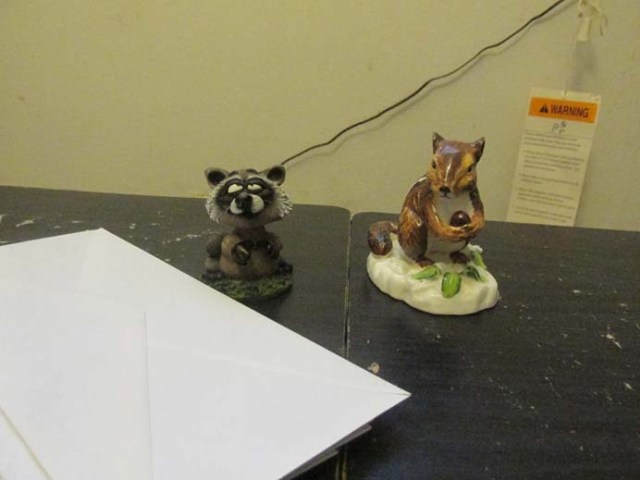 I was a huge fan of Rainbow Donkey in the Evil Squirrel’s Nest comic strip.  How come he hardly ever appears in an SCT episode?  He would give the Theatre some much needed class.

CHIP: Hey, I’m with you, Podge.  I miss the big lug, and like me, he needs to be a bigger part of our production!  So without further ado, let’s bring out the one and only Evil Squirrel’s Nest legend…. Rainbow Donkey!

FUZZYWIG: Wow, Rainbow sure has lost some weight since I saw him last…

SPONKIE 1: Pa’s a little tied up at home now…

SPONKIE 2: Yeah, literally.  He got in the doghouse with Mommy again, so I’m afraid he’ll be a no show.

CHIP: What are you talking about?

SPONKIE 1: Perhaps this picture will explain his situation… 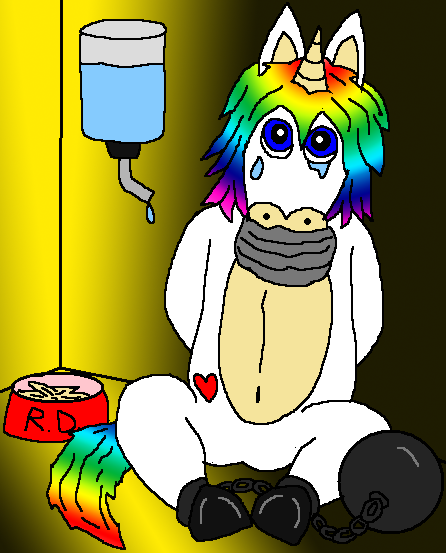 SPONKIE 2: You don’t wanna cross our Mom when she finds out you’ve been giving out free riding lessons…

SPARKLEPONY: Which one of you let your father out of my dungeon!?!?  I want straight answers NOW!

SPONKIE 2: You know Daddy’s a full blooded unicorn and has magical powers!

SPARKLEPONY: I don’t want to hear anything about any magical powers!  You two come home with me right now… and you won’t be leaving your rooms until it’s time for school Monday morning!

CHIP: Well… that sure seems like an interesting family.

FUZZYWIG: It was so much easier back in my day when Pops just used the belt on me.

CHIP: And a fat lot of good that did.  Time to chuck this letter away…

FUZZYWIG: Are you going to throw it through the window like David Letterman?

CHIP: Are you crazy?  We’ll get donated to Goodwill if we damage ES’s set!  Besides, there’s a better and more earth friendly way to get rid of these stupid fake letters…

FUZZYWIG: You’re going to clog up his insides and make him worth less when I sell him to the Chinese buffet!

FUZZYWIG: I wonder if he’ll shred my junk mail for me now…

CHIP: Speaking of mail, let’s have the next envelope, Fuzzy!

Like all other six people who follow this series, I eagerly awaited the episode where the father of Mitzi’s hatchlings would be revealed.  But there hasn’t been a single word about their sperm donors since then.  What’s up with that, and are they being properly supported by their other parent?

CHIP: Well, I don’t think there’s ever been any conclusive DNA tests to determine the paternity victim…

FUZZYWIG: And thank Dog for that!

CHIP: But as for child support… well I assume they’re being taken care of…

BEARCAT: We totally are!

ZEEBA: Yeah, Mommy makes bunches and bunches of money from doing poleback rides down at the titty bar!

BEARCAT: More than enough to buy us essentials like diapers, cute onesies, and the latest smartphones!

CHIP: But don’t Ultraviolet and Snuggle Bear provide anything for you since they were alleged to be the fathers?

SNUGGLE: Forget it, dude!  It ain’t legal without a blood test!

UV: I agree with the bear.  They’re no child of mine without a court order.

CHIP: That’s an awful attitude to have!

UV: That’s a financially smart attitude to have.

SNUGGLE: And lighten up, dudes!  I still provide the kiddies a different kind of support…

SNUGGLE: Sure, kids!  Have all of Uncle Snuggie’s candy you want!

SNUGGLE: Of course I am!  Now, just follow me over to this secluded part of the park, and I promise you’ll both get more than candyback rides!

CHIP: Shouldn’t we call the police?

FUZZYWIG: Nah, let the kids learn from their mistakes.

UV: I see nothing!  Nothing!

CHIP: The next envelope, please…

What’s up with that WARNING sign that hangs over the stage?  Is there some kind of unseen danger you should beware of?

FUZZYWIG: What is he talking about?

Both critters turn around… 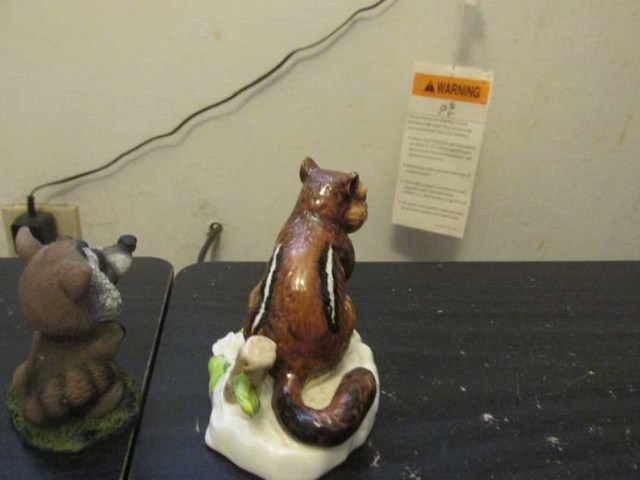 CHIP: Funny, I never noticed that before.  But I don’t think there’s anything harmful going on… 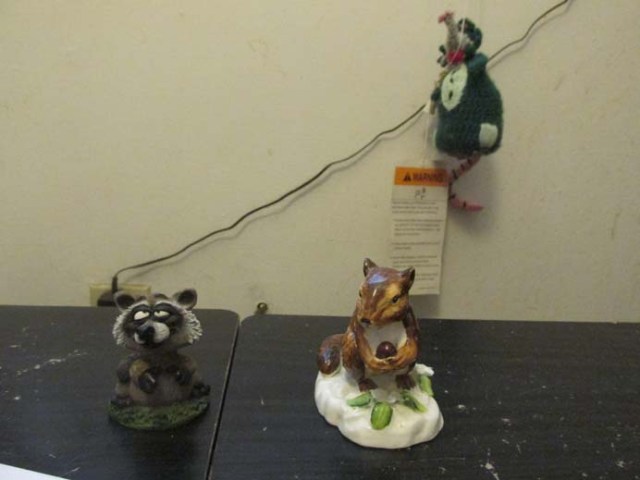 FUZZYWIG: Yeah, it was probably put there by some overprotective lawyer or maybe a troll.

CHIP: True.  I’m not going to worry about it.  Next letter, please!

Is that really MARIHUANA in Fuzzywig’s Good Stuff pouch, mon? 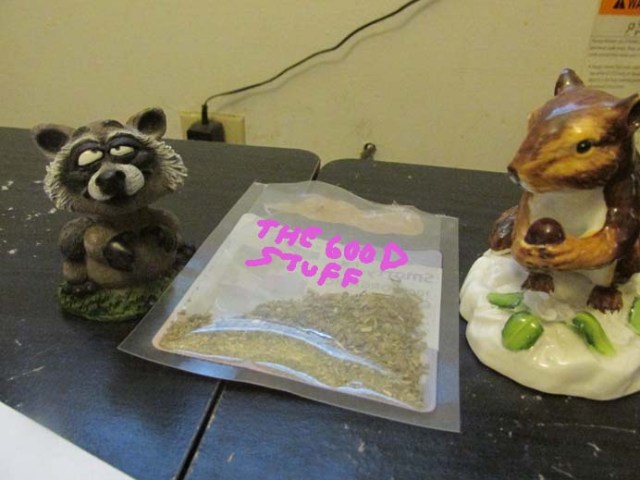 CHIP: Of course it’s not!  You’ll find a lot of weird things around the Shelf, but even we don’t have any actual MARIHUANA to use as a prop!  No, let me show you a behind the scenes secret (Flips the package over)…

CHIP: See!  100% organic catnip!  This stuff will get your pussies high, but it has no effect on us critters since it’s not the real thing.  Here, let me demonstrate…

CHIP: See what I mean!  Totally harmless and completely……. legal……… to…….. posssssssss….

FUZZYWIG: That’s what you get for making ASSumptions about what I keep in my bag of Good Stuff.  Maybe next time you’ll ask before you smoke…

CHIP: Man, I could really go for a huge bowl of chileh now.

FUZZYWIG: Since you’re out there on Cloud 420 right now, I’ll move this along and read the next letter…

Any chance I could get Mitzi’s phone number?

FUZZYWIG: Yeah, we do have privacy policies regarding our employees here on the Shelf, and will not give a fellow co-worker’s information.

CHIP: Mitzi may be a real floozy, but I’m sure she wouldn’t want something as personal as her telephone number broadcast all over the world.

FUZZYWIG: Yeah, you should be ashamed of yourself for even asking!

FUZZYWIG: Exactly.  Mitzi’s not like that at all off camera.  She actually has the morality of a nun…

FUZZYWIG: It must just be the “catnip” still messing with your mind, man! 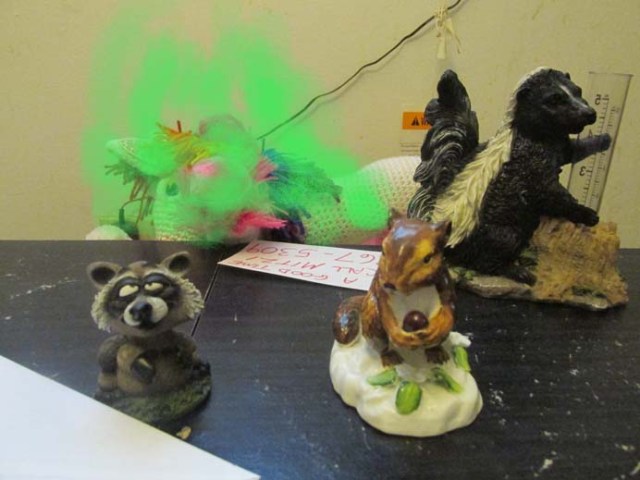 CHIP: That’s some pretty trippy stuff you have, Fuzzy.  I’m having all kinds of hallucinations right now.

FUZZYWIG: You’ll get used to it after the fifth straight week of flashbacks…

CHIP: I guess we should read the final letter now…

So first there was regular Scrat, and now there’s Big Scrat.  Is that just Scrat on steroids or what’s the deal?

FUZZYWIG: So, what’s the story, Jack?

CHIP: Where is your big bro?

SCRAT: He was walking with me on the way to the studio, but I lost him somewhere along the way…

BIG SCRAT: Sorry, little guy.  I had some business to take care of…. 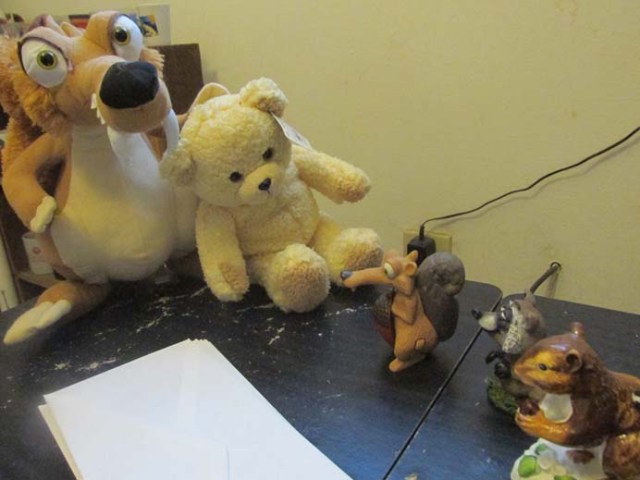 Big Scrat drags the struggling Snuggle Bear offscreen and takes him on a trip down the Hershey Highway…. 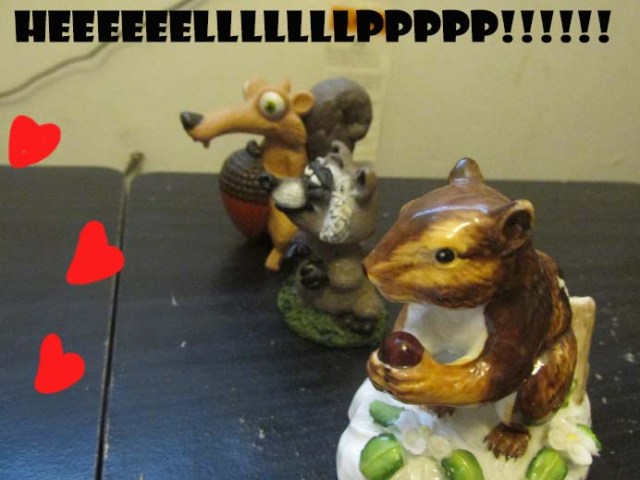 SCRAT: Oh dear.  My brother can get a bit carried away…

FUZZYWIG: Nah, it couldn’t have happened to a nicer bear.

CHIP: Fuzzy?  Can I get another hit off that pipe so I can unsee this hideous sight?

CHIP: Aaaaaaaand so…. that does it for this week’s look into the Shelf’s mailbox.  If you have any questions you’d like to have answered about the fucked up world of SCT, just drop us a line in your nearest mailbox.

FUZZYWIG: Preferably the box that says “Pitch In.”

CHIP: Good night everyone, and I sincerely hope the content of this episode doesn’t give any of you nightmares….