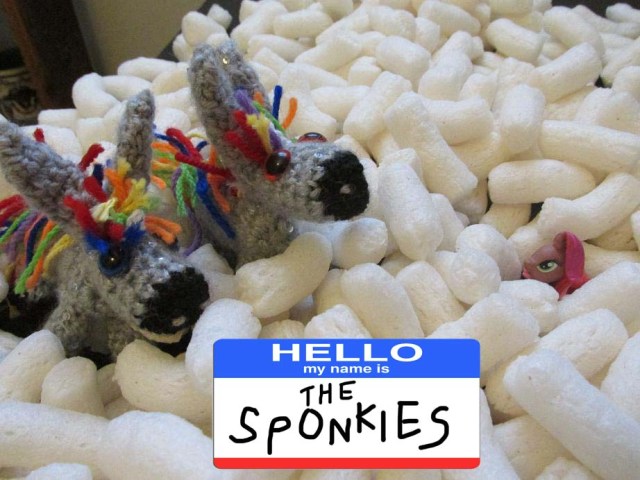 The parade of strange and unusual critters just never ends at The Nest… and we wouldn’t have it any other way.  Welcome to another probing edition of Meet the Critters, where you get the stories behind the freak flags the SCT gang likes to wave.  This Thursday, we’re going to get the scoop on our wonders from Down Under, The Sponkies.  Sorry, but petting is unavailable at the request of their mother…

Keep away from my children, you stinky bitch!

NAME: The Sponkies.  They are referred to as Sponkie 1 (The boy, blue eyes) and Sponkie 2 (The girl, red eyes) in SCT episodes.

SPECIES: Sponkies are what you get when a rainbow donkey unicorn and a sparkly pony breed.  At least that’s what my readers came up with… you all are just as fucked up as I am!

SHELF PERSONALITY: The Sponkies are twin siblings who get along well together, and are often cast to react to the strangeness going on around them.  Their mother Sparklepony is a strict helicopter parent who won’t allow them to be kids, while their father Rainbow Donkey just lets them do as they want.

Which is fine, since Rainbow Donkey apparently does what he wants.

RUNNING GAGS: The Sponkies have a bit of an Aussie flavor to them due to their creator (See below), and usually refer to each other as Sis and Bro due to lack of proper names.  The boy Sponkie has a huge crush on Mitzi (Well, who doesn’t?) which keeps his sister busy trying to calm down her brother’s hormones.  The girl Sponkie usually operates the prop camera when I break it out for “televised events.” 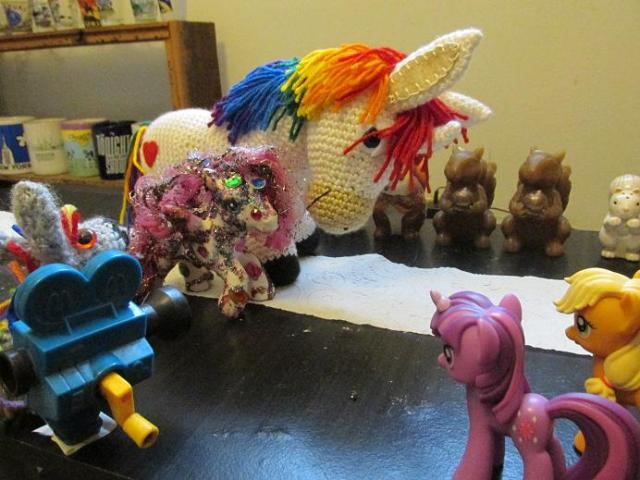 ESN PREMIERE: The Sponkies got a role in the first live action production Along Came Scratchy, and have been featured in numerous other projects even before Shelf Critter Theatre came around.  Their first photo appearance on my blog, though, came with my cat Ody… 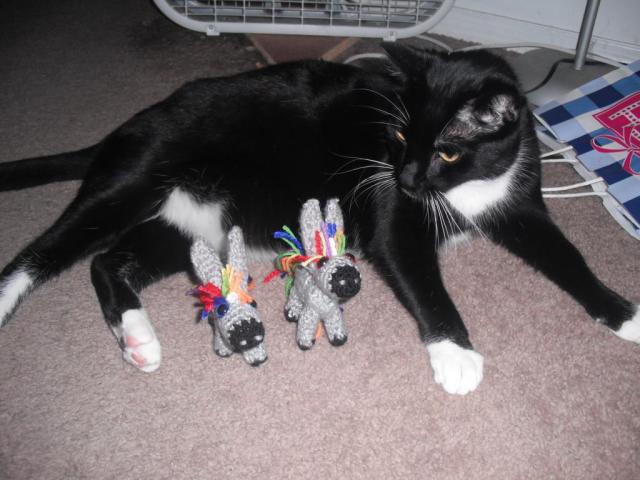 Nobody is allowed in this house that’s cuter than I am!

ICONIC SCT ROLE: The Sponkies were the main focus of three of the first official SCT episodes, including the series premiere A Very Sponkie Halloween.  It’s hard to say if they were better in Seasons in the Snow, or Superstition Ain’t The Way… their starring roles are always good, and I need to find a way to work them back in future stories… 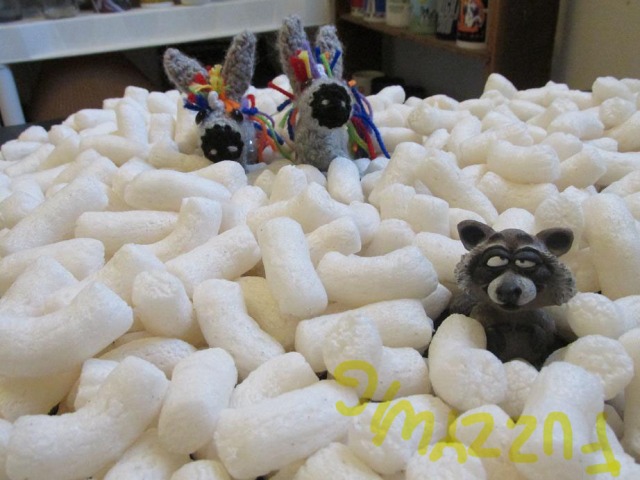 Who doesn’t love cute critters frolicking in the snow?

WHAT’S IN A NAME?: I’m not exactly sure where the portmanteau “Sponkie” originated from, though I would not be surprised if Aunt Sharon (Gentlestitches) didn’t come up with it herself.  For whatever reason, proper names never got assigned to either of the critters… and it’s far too late to change that, so they’ll just continue to be known as the Sponkies collectively. 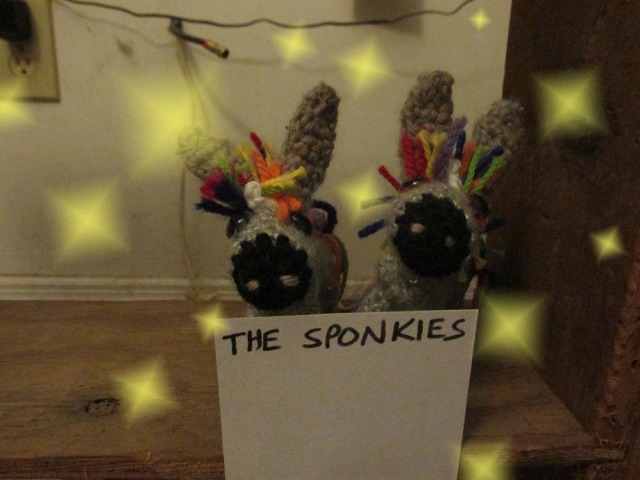 Sounds good to us!

WHAT ARE THEY?: Those of you who also followed Aunt Sharon’s blog would easily recognize that the Sponkies have her signature amigurumi style.  After I received Rainbow Donkey from Squirrel Picnic and Sparklepony from Alice, the concept of the two having kids ran rampant among my followers… and Sharon took it upon herself to create those hybrid children, the sparklecorns!  Aunt Sharon quit blogging at the end of 2016, and it appears her domain expired and has been hijacked by some marketing firm…. but you can read how the Sponkies came about and arrived in my post.

EDIT: Draliman noted that adding the “wordpress” back into the link brings up Sharon’s old blog, so here is the link to her original Sponkies post! 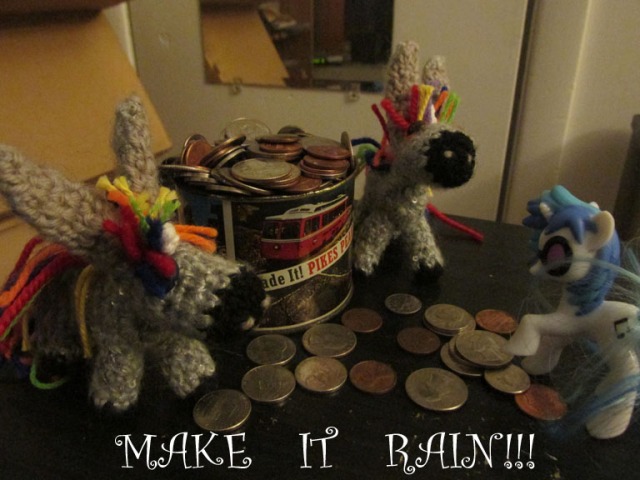 WHERE DID THEY COME FROM?: Since Sharon was from Melbourne, the Sponkies came all the way to The Nest from Australia!  Aunt Sharon was one of the most awesome and generous bloggers I’ve come across in my six years on WordPress, and I know a number of you reading this today received a personalized crocheted gift from her as well.  I miss her so much, and hope she’s doing well!

CAN I GET ONE TOO?: Obviously not, since they are true one of a kinds.  If Sharon ever posted their crochet pattern and it still exists out there… maybe you could make your own Sponkies. 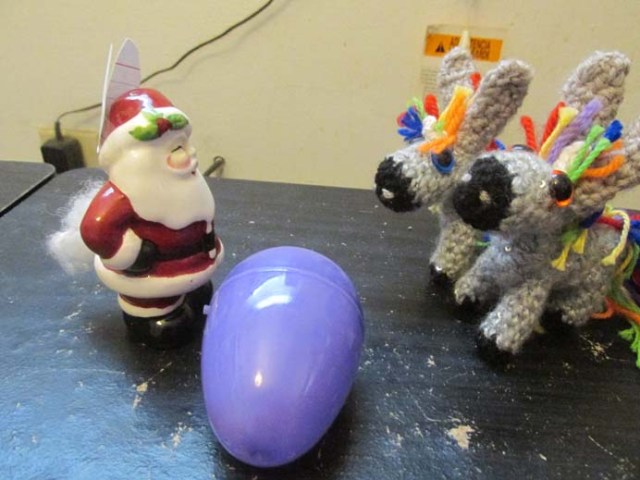 What do you mean I can’t just hatch my own Sponkie?

Bored former 30-something who has nothing better to do with his life than draw cartoon squirrels.
View all posts by evilsquirrel13 →
This entry was posted in Meet The Critters and tagged critters, meet, Shelf Critter Theatre, sponkies, unicorn. Bookmark the permalink.

17 Responses to Meet The Sponkies