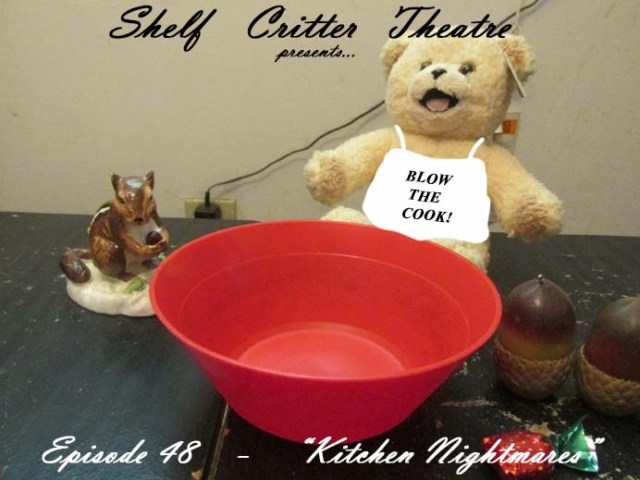 CHIP: Welcome to….. um, a special Wednesday edition of Shelf Critter Theatre.  This episode is in response to Miss Dingleberry’s contest on the Two Spoiled Cats blog where we have to provide the recipe for some really nasty cafeteria food that is used to poison children across the country every day.  Today we have the four and a half time winner of the Lead Chef contest, Snuggle Bear, in our studio today to try and make whatever the hell this crap is…

CHIP: That doesn’t look like cake to me.  Wait a minute!  What does that say on your apron!?!?

SNUGGLE: Hey, this chef doesn’t slave over a hot stove for kisses!

CHIP: You can’t wear that in this post!  Pam and Teddy run a family friendly blog!

SNUGGLE: Dafuq?  Since when do family friendly people follow The Nest?  (Snuggle rips off the apron  and throws it in the corner, where Fleabag starts humping it).  Alright, but I’m demanding a higher appearance fee!

CHIP: The continental breakfast in the green room IS your appearance fee.  Now how about we start with the cooking demonstration before we’re pre-empted by Lawrence Welk again.

SNUGGLE: Right, let me check out my equipment….

CHIP: Jesus H!  That’s enough knives to carve up everyone buried under Evil Squirrel’s crawlspace!  Where did you get all those, the OJ Simpson estate sale?

SNUGGLE: This is the “But wait, there’s MORE” part of the Ginsu knife I bought 30 years ago!  Cool shit, huh?

CHIP: No, and remind me not to turn my back during this segment.  Now the recipe?

SNUGGLE: Sure thing!  Let’s start this off right with a can of beer!

CHIP: Ummmmm… shouldn’t that ingredient be going in the bowl?

SNUGGLE: (Wiping his mouth) Don’t worry, I (HIC!) saved a few sips for the dish!

SNUGGLE: For this next part of the cooking demonstration, I’ll need a volunteer from the audience.  Dude!  What’s up with all the old broads in the crowd?

CHIP: That’s the demographic that watches this crap on afternoon TV.  Plus, they’re seat fillers we got off the street who were promised a post-show game of bingo for their time.

SNUGGLE: Damn, I was hoping to get a few hot numbers.  Oh well, you… yes YOU!  Come on down and help a bear out with this feast! 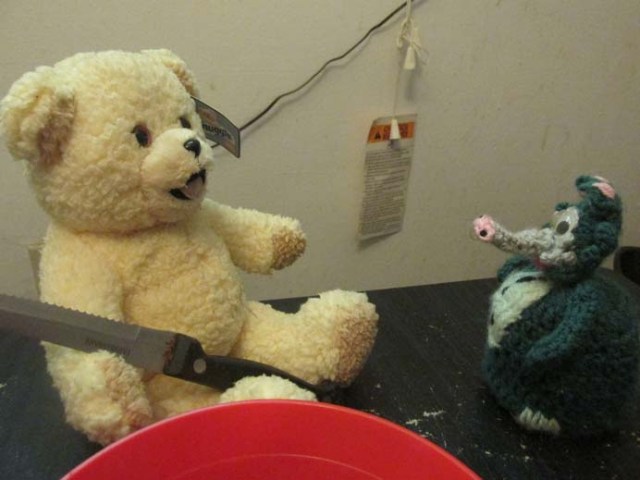 BUSTER: I hope this isn’t complicated.  I really don’t know anything about cooking.

SNUGGLE: No problemo, tubby!  I just need a couple pounds of fresh possum meat for this recipe!

BUSTER: Fresh possum meat?  Hmmmmm, I don’t think I know where you can get any of that….

SNUGGLE: BAM!  I got dibs on his copy of the home game!

CHIP: I don’t normally condone the murder of my show’s audience members….

SNUGGLE: Lighten up, dude!  This show’s ratings stink anyway.  Now for the next ingredient… one poisonous mushroom!

BUSTER: (Back from the dead, on screen this time) Happy birthday!

CHIP: A live resurrection is a good idea for sweeps month.

SNUGGLE: Oops!  Shoulda known I needed to add the mushroom first!  Oh well (Picking up a machete), I guess this recipe now calls for some twice baked possum!

CHIP: The critters in the front row are going to think they’re at a Gallagher show.

SNUGGLE: Speaking of hippies, it’s time to bring out a pinch of the Good Stuff!

FUZZYWIG: I thought you said you were making brownies.  My Good Stuff isn’t going to help out this bowl of sewage.

SNUGGLE: Dude!  Just put a dash of the grass in the bowl and go mellow out somewhere!

SNUGGLE: Now for the next delectable ingredient….. a rich honey glaze!

CHIP: Now that doesn’t sound half bad.  Are you sure you’ve got your recipe…

Snuggle Bear rears back with a sneeze coming on

CHIP: Should I have an intern fetch some Kleenex for you? 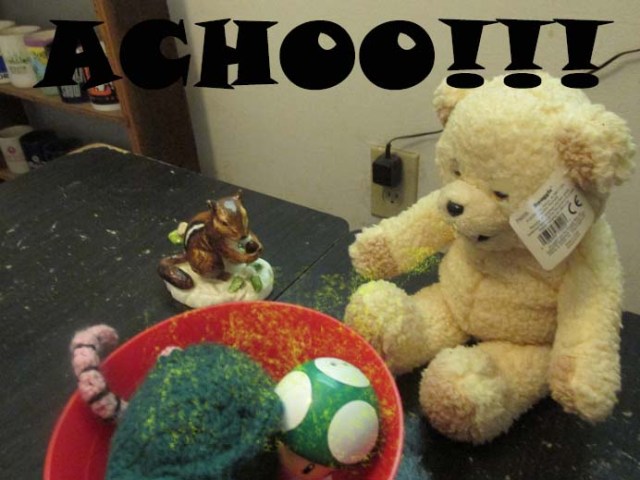 SNUGGLE: Dude!  That IS the rich honey glaze!  What do you expect a bear’s sneeze to taste like?

CHIP: I have a feeling I’ll be on an involuntary hunger strike after this episode… 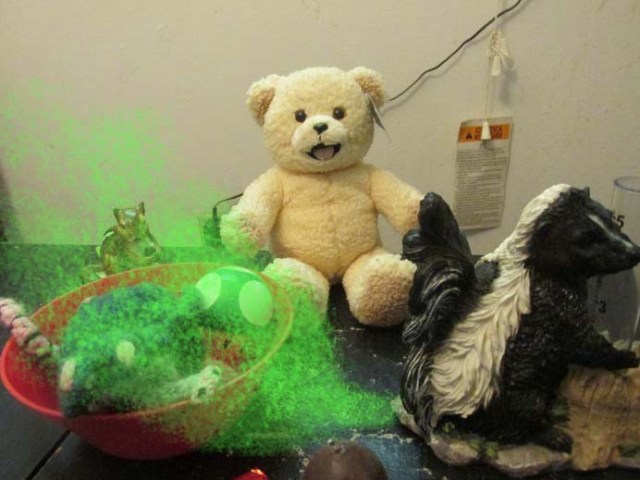 CHIP: This can’t possibly get any more unappetizing.

SNUGGLE: Yo dude!  There’s starving kids in Bumfuckistan who’d knife their own brother for some of this delicious shit!

CHIP: Is this demonstration about done before you turn my studio into a hazardous waste dump?

SNUGGLE: Almost!  I’ve just got to add the most secret ingredient to make this dish truly mouthwatering!

SNUGGLE: Mitzi baby!  You got some for me!

MITZI: I totally did!  I, like, filled this whole cup of my super secret bimbocorn sauce!

SNUGGLE: I think that’s a C-word, Mitz… but she’s right.  You sure have a preverted mind, Chip!

BEARCAT: We even helped Mommy make her special sauce in the Greasy Bake Oven!

ZEEBA: YAY!  I get cupback rides….

SNUGGLE: As much as I like my food to have that little girl tang to it, would you kindly remove your spawn from my secret ingredient before her nasty ass diaper seeps into the flavor?

SNUGGLE: Alrighty!  Since Fuzzywig stole my Sterno cans to huff, I’ll just have to light this baby right here on the stage!

CHIP: It’s a good thing the fire marshal would end up being poisoned before he could shut down my studio.

SNUGGLE: And there you have it!  Doesn’t it look so yummy?

SNUGGLE: Before you dump anymore Haterade on my exquisite culinary creation, let’s find an impartial party to taste test it.  Hey you!  With the rat’s nest!  Get over here!

SNUGGLE: You look pretty hungry.  Go ahead… dig in!

TROLL: Boy, I haven’t had a good meal since Thanksgiving 1998.  And it doesn’t look like that’s going to change today.  But I guess beggars can’t be choosers….

Troll scoops up a bite with his grubby, unwashed hands and puts it in his mouth… 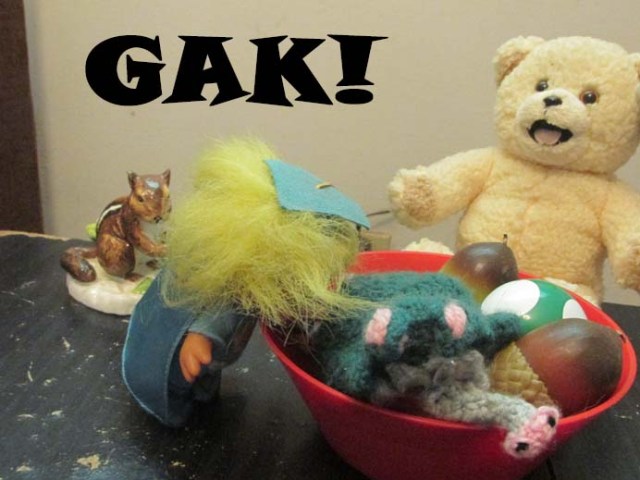 SNUGGLE: Dammit!  I knew I forgot an ingredient!  Recycled food product!  There, now this qualifies as a certified organic recipe!

CHIP: To everyone out there coming over from Teddy’s blog….. I deeply, deeply apologize for what you all just witnessed.

You can go to this post to vote for Chef Snuggle Bear’s hideous recipe in the contest before the winner is announced Friday morning!  If he wins, Uncle Snuggie promises to make a possum chileh feast for everyone this weekend…

Bored former 30-something who has nothing better to do with his life than draw cartoon squirrels.
View all posts by evilsquirrel13 →
This entry was posted in Shelf Critter Theatre and tagged bear, buster, chef, chip, contest, cook, cooking, critter, disgusting, funny, humor, mitzi, possum, recipe, shelf, snuggle, squirrel, theatre, unicorn. Bookmark the permalink.

33 Responses to Recipe For Disaster