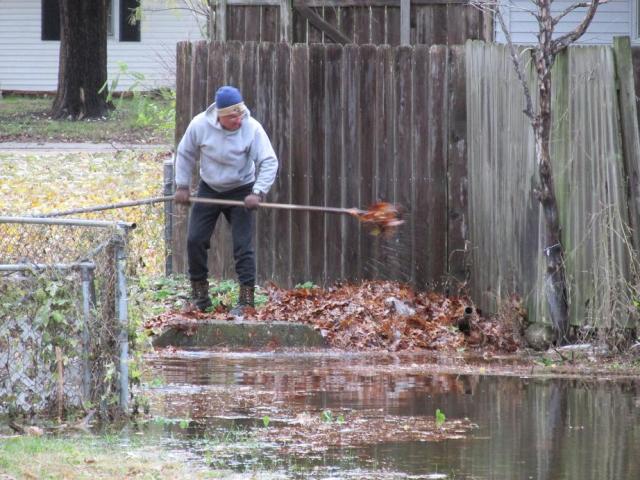 Among the burdens I inherited when I bought my home was a drainage ditch that runs through the neighborhood and which is constantly clogging up with everything short of murder victims… and the mouth of that ditch is in my backyard.  The feistier inhabitants of my hood hold the city to its task of maintaining the ditch, and here we see one of my town’s brave workers attempting to unclog this mess by himself.  With this being taken in late Autumn, there are only about 87 billion leaves clogging up the entrance to the sewer… but this lone hero, wielding nothing but a crappy little pig sticker, is going to attempt to clear the way for the water to release.  Bless his heart.  I like to see that the $17 a month I pay for sewer service is going to good use…

Bored former 30-something who has nothing better to do with his life than draw cartoon squirrels.
View all posts by evilsquirrel13 →
This entry was posted in My Top 200 Photos and tagged city, clog, ditch, flood, leaves, photo, photography, worker. Bookmark the permalink.