The Gizzard Of Blahs – Part VI

After recruiting Fuzzywig the scarecoon, Mitzi Gale and her dog Fleabag continue down The Shit Paper Road to see the titular Gizzard of Blahs…

FUZZYWIG: These are definitely the munchies I’ve been looking for.  (Reaches paw inside the container) I think I’ll take a couple dozen…

Fuzzy quickly drops his nuts as he finds himself getting bitchslapped… 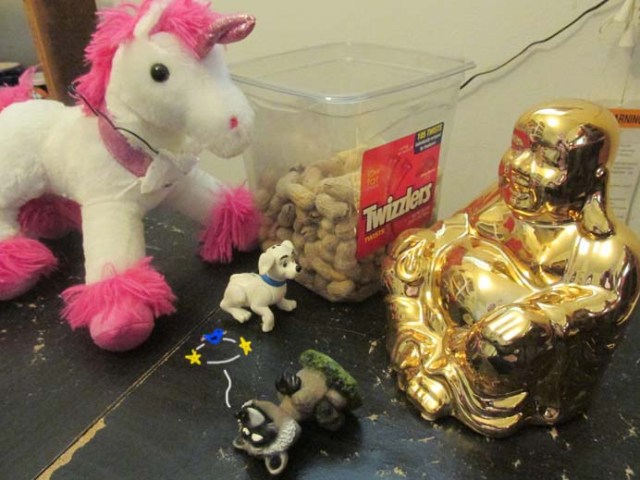 MITZI: But these are totally peanuts!

HUNG LO: They are FORTUNE COOKIES!  Don’t make me use my sumo moves on you!

MITZI: But we’re hungry and need some yummy noms!

HUNG LO: Will trade all the fortune cookies you can eat for this fine, tasty mutt.

HUNG LO: Here (Gives Mitzi and Fuzzy each their own “fortune cookie”), you may have free sample.

FUZZYWIG: I don’t know what you’ve been smoking, but these aren’t fortune…

Fuzzy breaks open the peanut to see a slip of paper fall out.

Man who go through airport turnstile sideways going to Bangkok

FUZZYWIG: How many more times are you going to use this stupid, lame joke as a fortune?

HUNG LO: (Guffawing like a jackass) Until it stops being funny, which will be NEVER!

Click your heels together three times and you won’t have to put up with all of this shit!

FUZZYWIG: It means we’re getting ripped off by this creep who likes sticking pieces of paper inside of peanut shells.  Let’s blow this joint…

FUZZYWIG: Now this is how you get fed in the Land of….

Mitzi begins scooping up the bounty of food thrown their way since Hung Lo can’t get up off his fat ass to do anything about it.  The trail of nuts leads Mitzi to discover our next plot development…

MITZI: Like, wowsies!  Fuzzy Wuzzy!  Come, like, check out this squirrel statue made out of hard stuff!

Mitzis other two companions come to gaze upon the squirrel made out of….. um, hard stuff?

FUZZYWIG: He looks a little stiff.  I’ll be back…

Fleabag lifts his leg to mark his territory, but before he can, the statue jumps out of the way…

CHIP: Of course I’m alive!  It’s just that me and my friends were playing freeze tag 20 years ago, and they all went home and left me frozen here!

CHIP: No, I’m the Straight Man!  The only sane member of this cast… and I have to put up with all of the nuttiness from everyone else…

FUZZYWIG: I found your oil can…

Chip sighs as he wipes off his oil matted fur as best as he can.

CHIP: See what I mean?

CHIP: Life’s not easy being the butt of every other critter’s sick humor!  I’m a classically trained thespian who should be on Broadway or in Hollywood right now!  Not on this crappy makeshift stage with a bunch of fucked up misfits desecrating classic films!

MITZI: Like, what would you do if you could be just a regular lesbian?

♪♫ When a critter whose quite able
To act just like Clark Gable
Gets roles like Jamie Farr
Every scene is quite tragic
I could really show my magic
If I only were a star! ♪♫

♪♫ I’d be dashing, I’d be witty
My lines would not be shitty
My castmates not subpar
And the check in the mail
Would be at least union scale
If I only were a star! ♪♫

♪♫ Picture me… the silver screen
In the movie of my dreams
“Be careful!  Don’t cross the streams!”
I’d get applause! (Clap! Clap!)
Just ’cause ♪♫

♪♫ I would never have to struggle
With creepy bears like Snuggle
Or scenes in titty bars
Life would be like a Yahtzee
Even with the paparazzi
If I only were a star! ♪♫

MITZI: That was, like, totes amazeballs!  Are you gonna bust a move now like the scarecoon did?

CHIP: Are you serious?  I’m not going to dance like a fool in front of…

Mitzi grabs onto Chip and pulls him against her…

MITZI: Come on!  We could totally be dance partners like Ginger and Mary Ann!  Let’s lambada!!!!

Chip makes protests that are unintelligible due to his face being pressed up against Mitzi’s excessive boobage.

MITZI: This is making me, like, totally moisturized in my tenderloins! (Virtual royalties to Merby)  You need to come with us to see the Gizzard of Blahs so he can turn you into a star!

RAINY: Good luck with that!

FUZZYWIG: Dafuq is this bitch?

RAINY: That’s The Wicked Bitch of the Wild Wild West to you, hemp for brains!  And I’m here to make your trip as inconvenient as possible!

RAINY: You two fools better stay away from this girl, or I’ll have to teach you both a lesson as well!  (Looking at Fuzzy) I think I’ll use you to scare all the roaches out of my castle!  And you! (Looks at Chip) I’ll make a paperweight out of you so my scandal sheets don’t blow away in all the storms I’ll be creating once I get those booby grippers back! 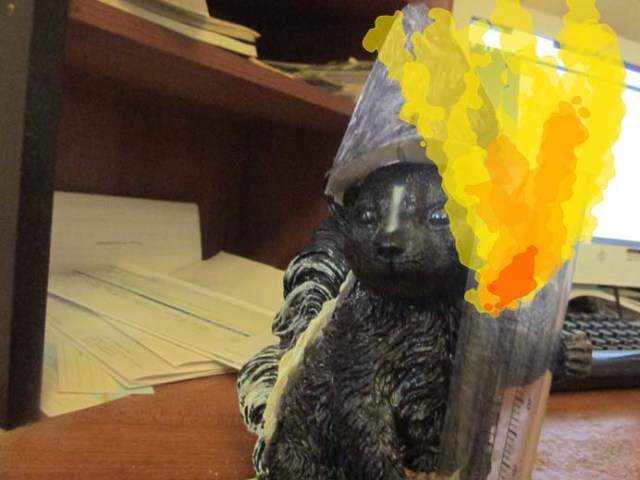 Through the shitty, illogical magic of Shelf Critter Theatre, Rainy conjures up a fireball from her rain gauge and throws it at our heroes below…

FUZZYWIG: I needed a light!

CHIP: Does anyone smell something burning?

Rainy, realizing she’s been foiled again, stomps off in a puff of green gas… 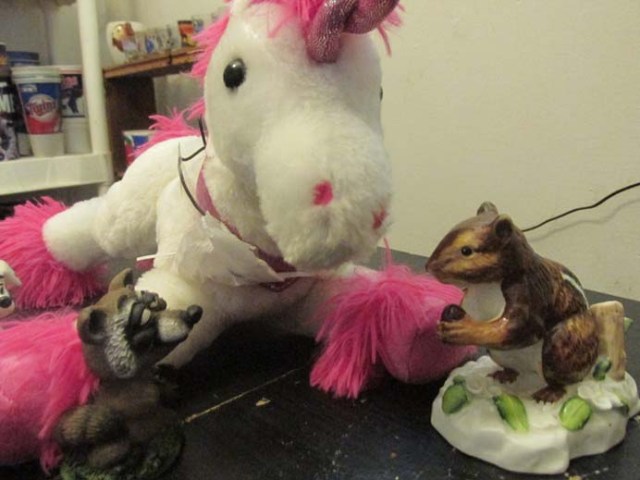 MITZI: That bitch is, like, totally giving me the jeepers creepers1

FUZZYWIG: Don’t be frightened, dear.  We’ll see to it she don’t bother you on the way to the Gizzard’s crib…. right Chip?

CHIP: Do you have any idea what we’re getting into?  We might die!!!

FUZZYWIG: So you’re in, then?

MITZI: You critters are like, totally the bestest!  Mitzi can’t help but think she knows you from somewhere else, though…

CHIP: Yeah, we were written out of Part I… so within the universe of this story, you never saw us before now.

MITZI: Oh wells!  Let’s get this show back on the poop paper road!  I’d totally take you both arm in arm if I weren’t a quadrupedo!

And so with Chip now added to the ensemble, our hardy pilgrims continue their long trek to the Cubic Zirconia City…. once again walking as far as the cheesy set will allow them before we end this week’s episode…

“The Wizard Of Oz’s” most infamous urban myth.

Bored former 30-something who has nothing better to do with his life than draw cartoon squirrels.
View all posts by evilsquirrel13 →
This entry was posted in Shelf Critter Theatre and tagged chip, critter, dog, fleabag, fuzzywig, mitzi, parody, raccoon, shelf, squirrel, theatre, tinman, unicorn, witch, wizard of oz. Bookmark the permalink.

10 Responses to The Gizzard Of Blahs – Part VI