The Gizzard Of Blahs – Part IX

Where to find links to previous parts of this series…

Mitzi Gale, her loyal mutt Fleabag, and her traveling companions the Scarecoon, Straight Man, and The Nutless Bear finally arrive at the gates to The Cubic Zirconia City where they all hope to have their wishes granted by the infamous Gizzard of Blahs…

Chip gives the huge door a couple of light taps…

SNUGGLE: Dude!  You sound like a shy little Girl Scout who doesn’t want to sell overpriced cookies to the neighborhood pedos!  Let me show you how to get someone’s attention… 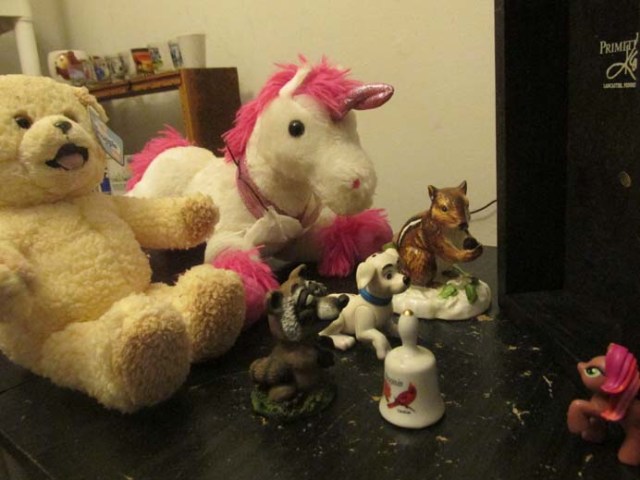 TINA: Dafuq you guys want?  I’ve already got enough copies of The Watchtower to keep the restrooms stocked for a decade…

CHIP: We want to go inside to see the Gizzard of Blahs!

TINA: As if!  You critters clearly don’t belong here.  And sorry, but no pets are allowed inside The Cubic Zirconia City.

FUZZYWIG: I happen to be blind, and this dog is going to lead me to the nearest Chinese buffet.

TINA: Yeah sure.  Why don’t you vagrants go back to Buttmunchkin Land with all of the other freaks… 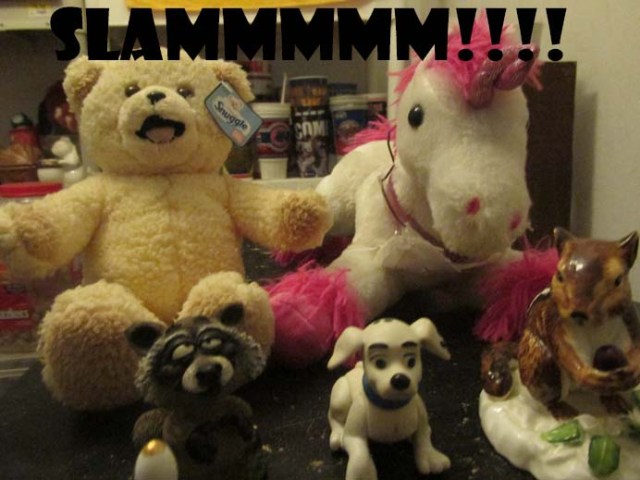 CHIP: Well, THAT was rude!

MITZI: Oh noes!!!  Like, how are we going to see the Gizzard now?

FUZZYWIG: I hope you brought enough for the whole class.

SNUGGLE: Shut up, dude!  All I need is enough to get us inside those gates!

CHIP: I have a feeling that isn’t all you’re hoping that candy will get inside of!

The door predictably creaks back open….

TINA: For meeeeeeeeeeeeeeeeeeeeeeeeeeeee!?!?  Why didn’t you say you had candy to begin with?  Welcome to The Cubic Zirconia City!  Come on inside, and don’t forget to visit the Chamber of Commerce and get a selfie in front of our water tower!

Mitzi and friends enter the fancy city, which is just as cheap and gaudy as you’d expect it to be.  The first denizen of this dystopia they run across is a sweet little lamb leaning on a lamppost…

MITZI: OMGS!  What a kyooooootie!!!

SNUGGLE: Hey, toots!  You know to get to The Gizzard’s joint?

MARY: No.  I’m just an innocent little lamb out here on the street corner trying to shake my tail so I can go to college and become a Madame.  Were any of you craving a little mutton tonight? 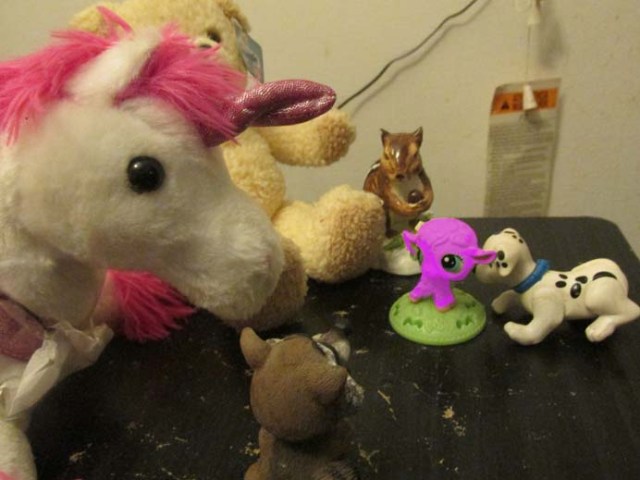 MARY: What?  You mean you’ve never heard of The Whore of a Different Color before?

CHIP: Color changing critters are not exactly commonplace, you know…

MARY: Y’all look a bit worn out and in need of some relaxation after your long trip.  Maybe this baaaaaaaad girl can help you unwind a bit.

MARY: But you can’t all have at me.  I’m not quite that adventurous.  So I’ll only be able to spend time with one of you.

MARY: Tell ya what.  We’ll settle this with one of my favorite games, Spin the Bottle.  Whoever it points to gets some quality time ram jamming this lamb, while the rest of you can just chill out at the food court like a bunch of wankers.  Got it?  OK, let’s spin this puppy!

…well, yeah.  You all saw that coming.

SNUGGLE: Dude!  This was rigged!  All of us got our tents pitched, and you spun the only chick!

MARY: Well, it looks like I’ll be camping in the Grand Canyon this evening!  (Takes Mitzi by the hoof) Come with me, dear…

Mary hums along to Pink’s “U And Ur Paw” while leading Mitzi back to her chambers… leaving the four gentlecritters to their own devices.

CHIP: I guess I’ll go place an order over in the food court.  Anyone want something to eat?

FUZZYWIG: Naw, I’ve got all I need to keep me occupied right now…

CHIP: I wonder how long the girls will be?

SNUGGLE: TOO LONG!  I’m not just gonna sit here and not get any when there’s obviously plenty of forbidden desires in this city!

FUZZYWIG: I thought you didn’t have any balls.

SNUGGLE: Doesn’t matter!  I can still have my fun, and I aim to find it!!!

SNUGGLE: Score!!!  I’ve got a lot of muscles that could use some relaxing right now…

TINA: Welcome to our fine, professional massage parlor, sir!  How may I assist you today?

TINA: A girl’s got to earn her allowance somehow, you know!  Can I interest you in a full body massage?  Only 20 Blahsbucks!

SNUGGLE: Hey, that’s not too pricey!  You got a deal….

TINA: Maybe with a “happy ending” for an extra ten spot?

Tina leads Snuggle to one of the back rooms, lays him beer belly down on one of the tables and throws a towel over his fuzzy buns…

SNUGGLE: Hell yeah!  Except for the fact that I’m poking through the table.  So, let’s get it on, babe!

TINA: Ah, ah…. patience, grasshopper!  This is supposed to be a sensual experience, and I need to go fetch the Crisc…. I mean, oils so you can be properly rubbed down.  Now…… while I’m gone, relax!

SNUGGLE: This is gonna be the best massage ever!  Gotta love a city that lets jailbait work at the adult joints!  I can’t wait for this Triple X throwdown to get started!

BIG SCRAT: Neither can I! 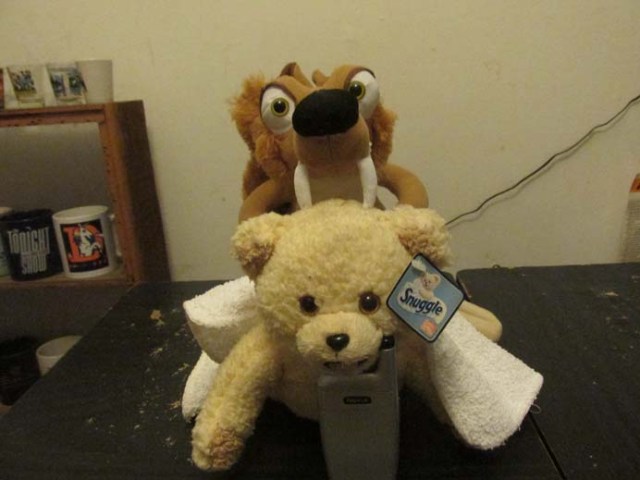 BIG SCRAT: Tina’s just a candystriper here.  I’m the masseuse, and I’m so glad you requested the happy ending!  You’ll be a brand new bear when you limp out of here…

BIG SCRAT: Hump hump here, hump hump there, spread those bushy buns!  That’s how we keep you in good care in the merry old land of Blahs!!!

Oh, I think the “massage” has started now…..

CHIP: Where is all that racket coming from?

FUZZYWIG: I think our new friend has just found himself some true love… 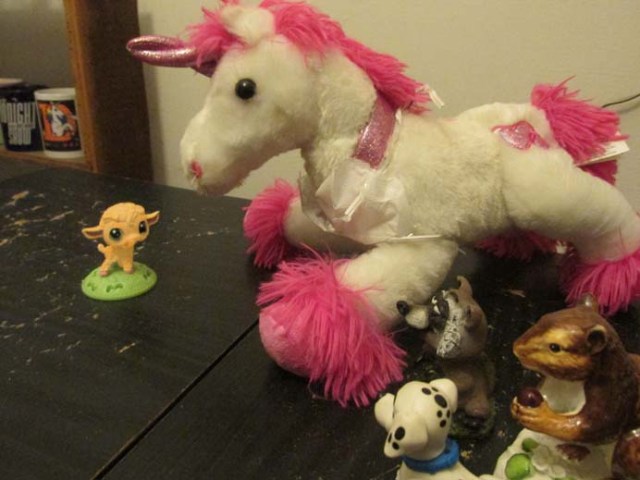 MITZI: You were, like, such a porcupine in bed!

CHIP: That’s concubine, Mitzi!  And please, spare us the details….

FUZZYWIG: Actually, I’d love to hear them.  And see the video, if possible…

FUZZYWIG: He’s getting his nonexistent jewels polished at a business of ill refute…. oh, speak of the lucky devil.

CHIP: I thought a massage was supposed to make you feel better.

SNUGGLE: SHUT UP!!!  Not a word to anyone about this!

MITZI: So, like, which way do you think we should go?

CHIP: They really need to hand out maps at the front entrance.

FUZZYWIG: Either I’m high as a kite, or there’s a UFO in the sky right now…. 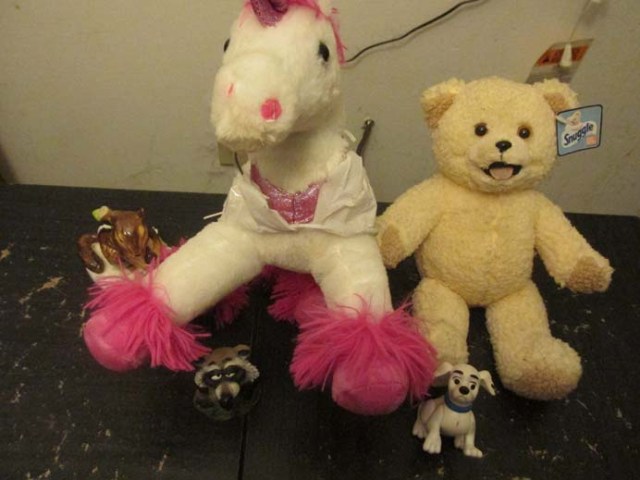 SNUGGLE: Is that a flying skunk on a race car?

MITZI: That’s, like, the Wicked Bitch that’s been sexually harassing us!

CHIP: This isn’t fair!  I’m the only critter that can’t look up! 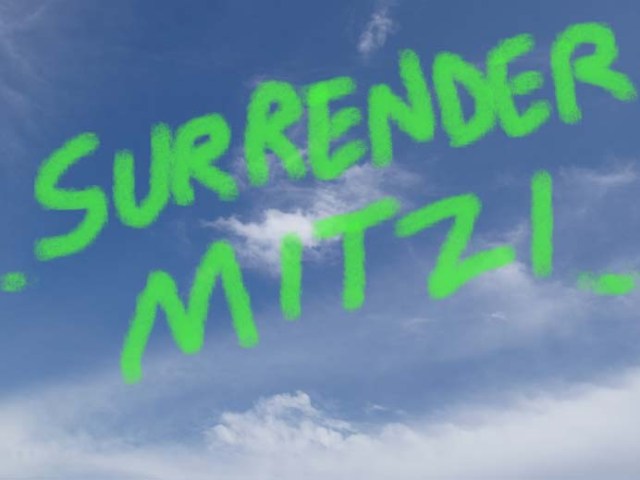 The other critters in the city have noticed what’s going on by now and begin storming the door of the Gizzard of Blahs demanding answers, while the lone guard tries to keep the masses at bay….

TROLL: Alright, everyone just back off!  Go back home!  There’s nothing going on!  Just a bunch of fake skywriting!  Go on, shoo!!!  Go away before I have to start cutting some bitches!

Mitzi’s crew pushes their way to the front crowd, hoping to use this chance to get their much awaited audience…

MITZI: But we’ve come, like, a long way to see the Gizzard so we can ask him for…

Another Cubic Zirconian tries to sneak towards the front of the crowd, but the Troll is quick to pounce…. 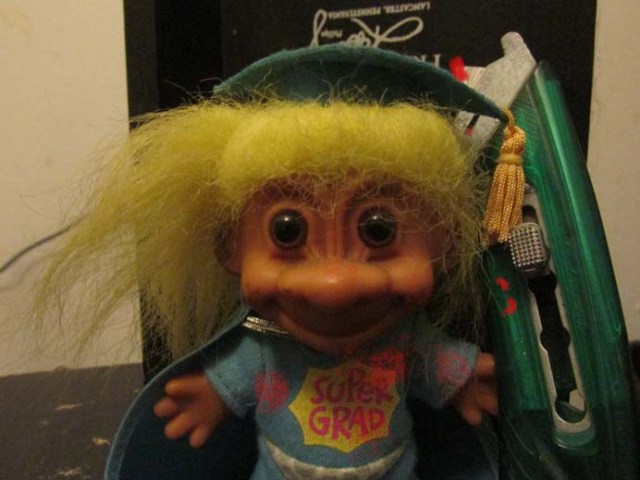 17 Responses to The Gizzard Of Blahs – Part IX