The Butcher Of Wilson Park 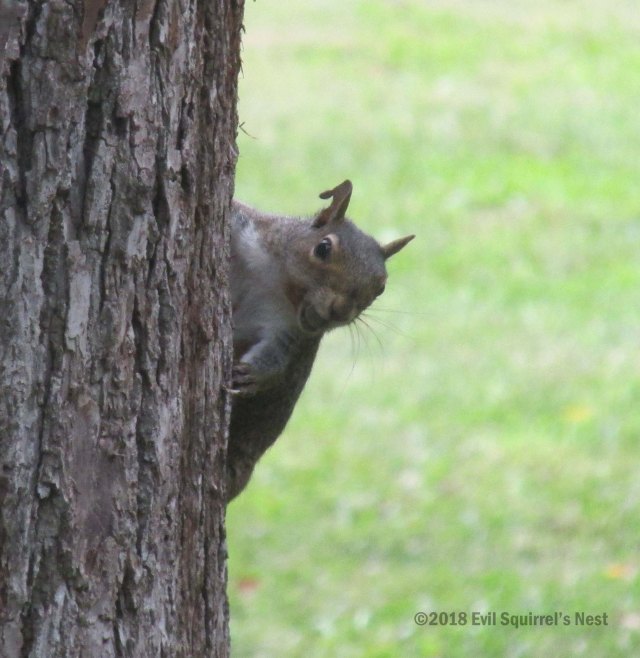 I’ve posted several photos before of the local park squirrels sporting rather stylish and definitely unnatural notches cut into their ears.  While squirrels are quite scrappy and will sometimes leave a bit of themselves behind after a fight, the sciurine body mods being

rocked by the denizens of my park seemed to be too perfect to be anything but manmade.  It was suggested by a commenter that the city was probably sterilizing squirrels to control the population and were marking those who’d already gone under the knife with an ear notch.  OK, fine.  But the squirrel up above, who I ran into on my most recent trip to the park this Thursday, seems to have gotten quite the whack job on his ear.  Come on… even Vincent Van Gogh didn’t mutilate himself that much!  What kind of a look is that!?!?  From this perspective, the dangling tip of his ear almost takes on the appearance of a demon horn.  I guess this week’s Saturday Squirrel will be a hit at the Halloween party next month anyway, especially if he can get the other ear to match…

Poor guy.  Have a great weekend, and beware of the butcher!

Bored former 30-something who has nothing better to do with his life than draw cartoon squirrels.
View all posts by evilsquirrel13 →
This entry was posted in Saturday Squirrel and tagged adorable, cut, cute, ear, mutilation, notch, park, photo, photography, squirrel, tree. Bookmark the permalink.

15 Responses to The Butcher Of Wilson Park