The Gizzard Of Blahs – Part XIII

Links to previous installments can be found here! 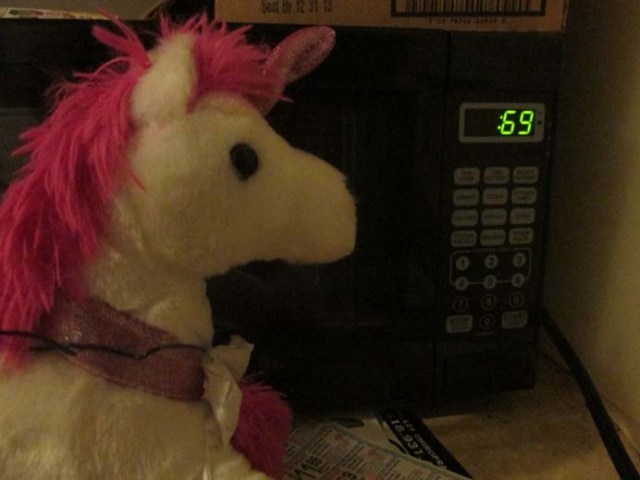 Will our heroes make it to the wicked bitch’s castle before the timer hits zero and Mitzi’s bust goes bust!?!?!?!? 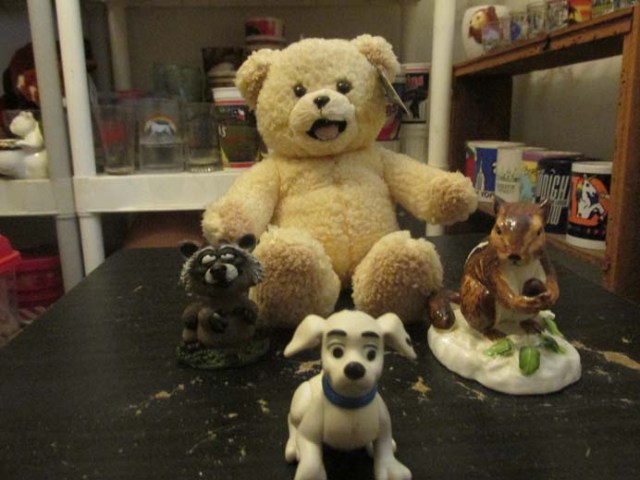 SNUGGLE: I swear, this stupid mutt’s led us through half of Blahs by now!

FUZZYWIG: Maybe we should go in the opposite direction if we want to find the castle.

CHIP: Look!  I think that’s it ahead!  We just took the scenic route, that’s all.

FUZZYWIG: If only we’d had a female to stop and ask for directions, we’d have made it before 4:20.

The four travel weary critters reach the entrance to the bitch’s castle.  The drawbridge is down, but a guard has been posted! 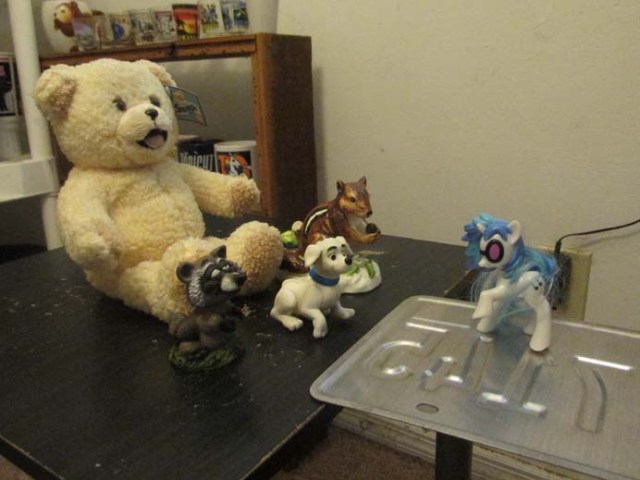 CHIP: We need in the castle to rescue Mitzi!

SCRATCHY: And as the enemy, I should let you in because……?

FUZZYWIG: What if we say “Pretty please, with cannabis on top?”

SCRATCHY: Eh, I tell you what.  It’s not like I really care one way or the other about whether you spoil my boss’ plans.  But I think you should be tested before I let you pass.

SNUGGLE: Dude!  I haven’t had to take a test since I flunked the GED for the fifteenth time.  We’ll just go around your stupid bridge.

SCRATCHY: And swim the deadly otter infested moat?  I doubt that.  Nah, I’mma ask you guys three questions related to my favorite subject, music.  Get them all right, and I’ll step aside and neglect my duties.  Miss one, and I’ll send you a pink gluestick made out of your friend.  Fair enough?

CHIP: Alright, we have no choice.  Shoot.

SCRATCHY: Damn, I knew that was too easy.  Second question!  What was hip hop duo Kris Kross’ gimmick that made them famous in the 1990’s?

SCRATCHY: Two for two!  You guys shoulda been judges on Solid Gold!  OK, Last question!  This one’s a toughy.  If the Spice Girls and N*Sync all paired up and did the wild thing, how many members would a band made out of their children contain?

FUZZYWIG: I knew I shouldn’t have smoked all those joints in the back row of my math class.

CHIP: We can figure this out!  Let’s see… there were five Spice Girls, and five boys in N*Sync, so the obvious answer is….

CHIP: Huh?  But there’s five people in each…

SNUGGLE: Dude!  Lance Bass is gayer than The Village People leatherman riding a mechanical bull in the middle of San Francisco!  He’s not tapping any of those Spices!

Scratchy steps aside and allows the entourage passage into the castle…

CHIP: Hurry!  We don’t have any time to lose! 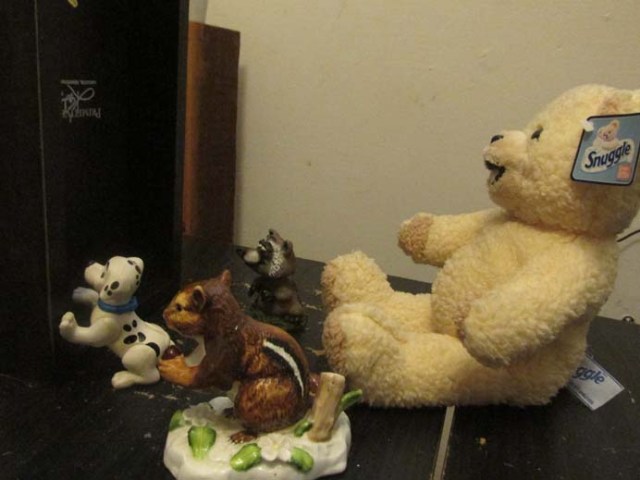 FUZZYWIG: Well, this is the only door on the entire soundstage, so Mitzi must be in this room.

MARIO: Mama Mia!  I hope I’mma not too late! 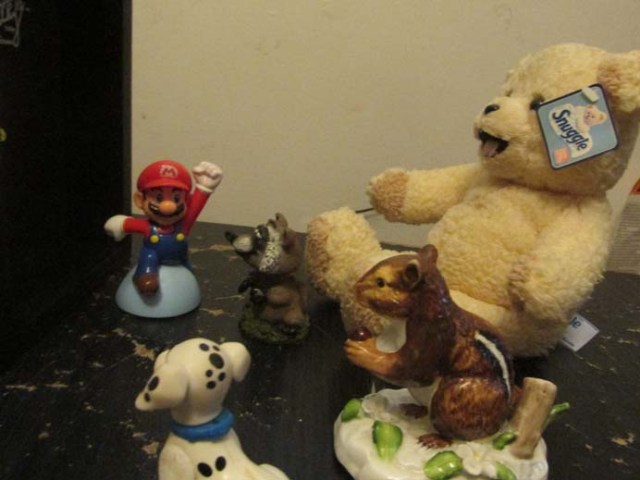 SNUGGLE: Dafuq are you?

MARIO: I’mma here to save-a the Princess from the evil Koopa!

FUZZYWIG: Sorry, Guido, but your princess is in another castle.

MARIO: Fucking fettuccine!  That’s-a what they always tell me!  Don’t worry, Peach-a my love!  Mario’s a-coming for you!

Mario jumps in a nearby pipe and warps to a different level… or maybe ends up in the septic tank.  Who knows?

FUZZYWIG: I think I may have to cut back to six joints a day.

CHIP: (Yelling through the door) MITZI!!!  Are you in there?

MITZI: (From inside) Like, totally Chippy Wippy!  Hurry!  I can’t read numbers, but I think my time’s, like, almost up!

CHIP: How are we gonna get inside?

SNUGGLE: Leave that to me!!!

The bear rears back and charges at the door…. 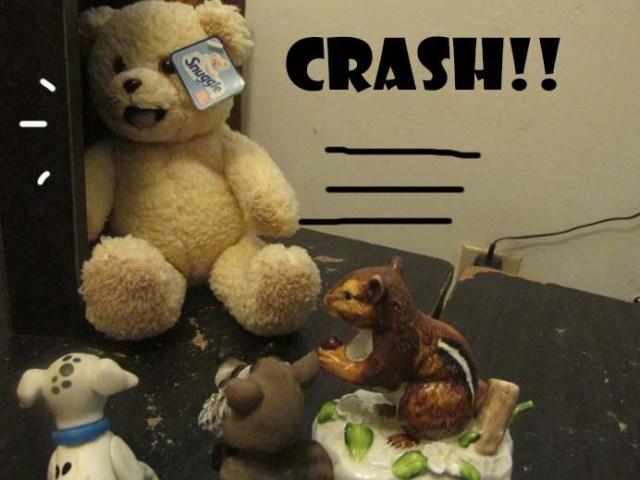 SNUGGLE: I may need to borrow a wish and ask The Gizzard for a new shoulder now.  (Grabs his upper arm in pain)  FUCK!!!!!!!

Meanwhile, Fuzzywig ambles up and turns the doorknob… 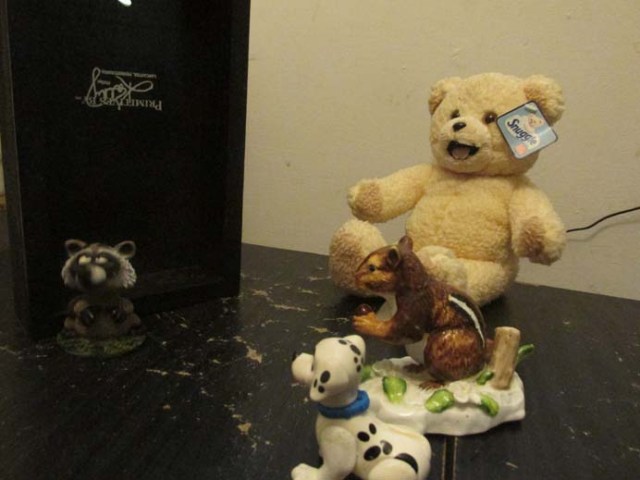 FUZZYWIG: Well, that was about as difficult as selling dope at a Grateful Dead concert… 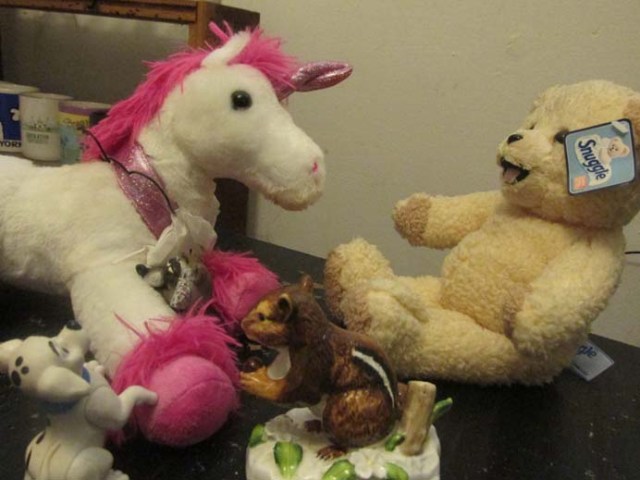 Mitzi runs up and hugs Fuzzywig, grinding his spine into fine powder.

MITZI: Yes, I’m, like, A-O-L!  My boobies were going to shrinkypoo when the time on the clock was totally up!

CHIP: The clock’s still running, though!

SNUGGLE: We just need someone to take your place in this room, that’s all!  Well, what do we have here?

BUSTER: I was told to wander onto the set right now for some reason… 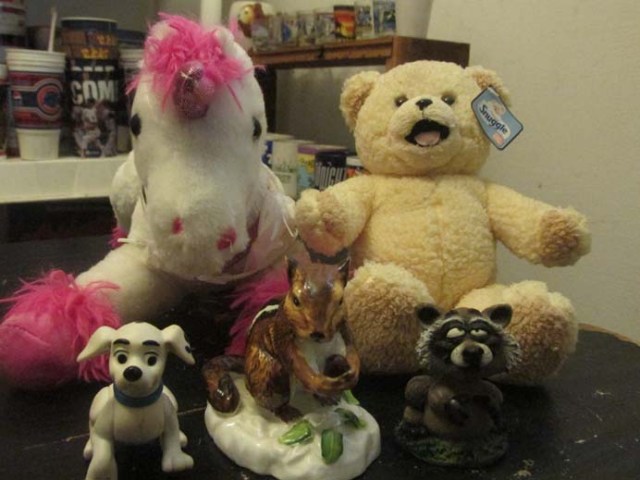 FUZZYWIG: Well, that was a little messy.

CHIP: Imagine that being 30 pounds of silicone rather than possum guts.

MITZI: My boobies would have ‘sploded like Chuck Negron’s weewee!

SNUGGLE: A tit is a terrible thing to waste.

CHIP: So we still need to steal the bitch’s rain gauge!

MITZI: Let’s, like, totally get out of here instead before Mitzi’s other pretty parts get dessicated!

The five critters make haste for the castle exit, but it closes in their face. 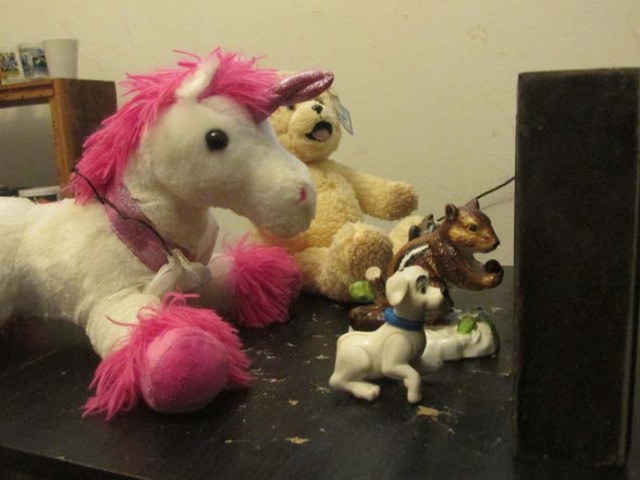 MITZI: Like, leave us alone before I totally get an retraining order!

RAINY: You’re the one who should be locked up for killing my brother and stealing his booby grippers!  I’m going to get what’s mine, and then I’m going to finish you ALL off just for the pain and suffering you’ve caused me!

FUZZYWIG: I’ve got something that will ease that pain and suffering…

RAINY: I’ll bet you do, Scarecoon.  And I can imagine how painful it would be for you if someone were to…. oh, maybe set it on FIRE! 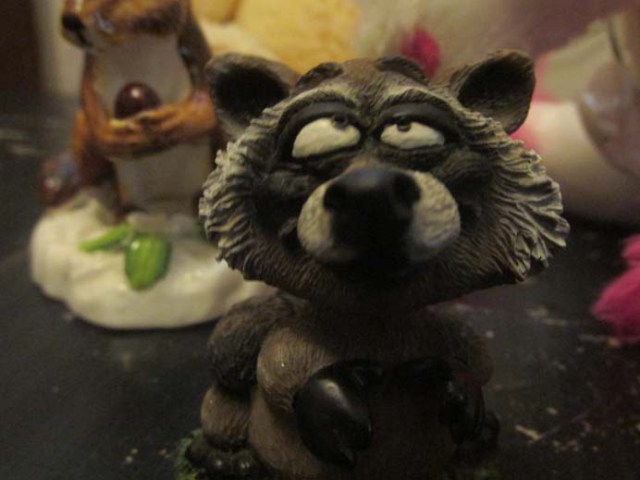 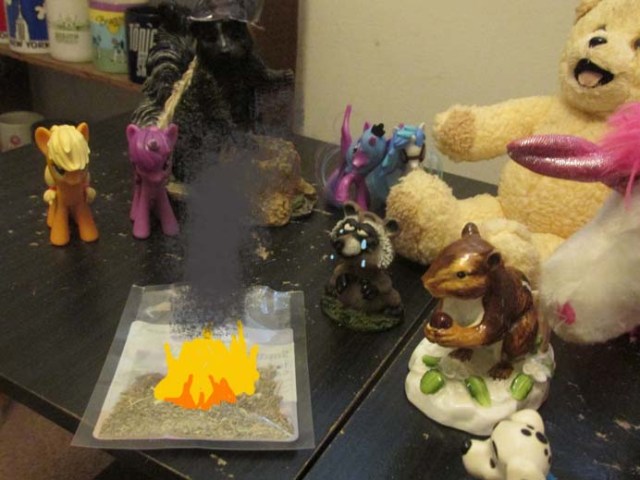 Fuzzywig starts sobbing as his package of herb becomes a bonfire…

FUZZYWIG: Someone put it out!  We can still save the patient!  We need WATER!

CHIP: (Looking around) There’s supposed to be a prop bucket of water around here somewhere, but I don’t see it!

SNUGGLE: Figures the prop guy around here is slacking on the job again.

MITZI: Like, how are we going to make this into a happy ending without some wet stuff?

Enter the hero to save the day…….

RAINY: What are you doing you filthy hound?  If this dog isn’t housebroken, then he’s going to have to leave my castle……

TWILIGHT: So the skunk that could never collect any rain in her precious rain gauge just turned into a puddle of water herself.

MITZI: Can we, like totally have it?  It’s a gift for a boyfriend of mine!

LUNA: Take it!  Get it out of our sight!

TWILIGHT: You want the silly hat too?

SNUGGLE: You chicks seems pretty happy that we just killed the wicked bitch!

APPLEJACK: We are, Sugarcube!  Ding dong, the wicked boss is dead!!!

MITZI: Let’s, like, hurry back to the Gizzard’s crib!  We’re gonna have all our dreams come totally true!

SNUGGLE: Fuck yeah!  And I know who I’m gonna have take my new nuts for their first test drive!

Snuggle slaps the shit out of Fleabag, as the gang heads out the door and back to the Cubic Zirconia City…

LUNA: So, now that us winged ponies are independent contractors… what do we do about this mess?

11 Responses to The Gizzard Of Blahs – Part XIII