The Gizzard Of Blahs – Part XIV

Where to read up on past installments… 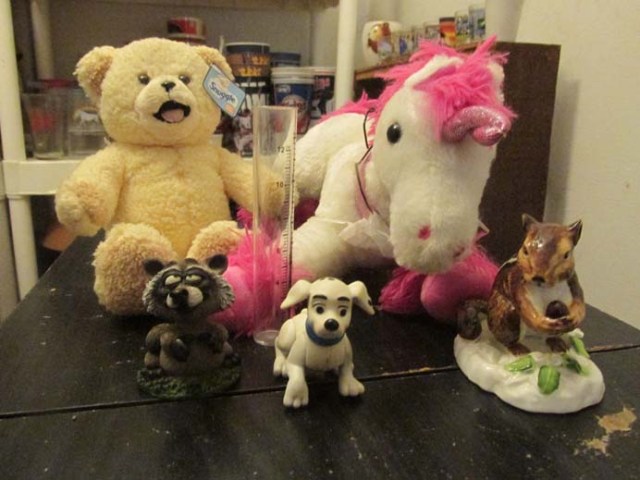 Having returned from courageously defeating the Wicked Bitch of the Wild Wild West, Mitzi Gale and her friends return to the Cubic Zirconia City so that the Gizzard can finally grant their selfish requests…

SHADOW: So you are.  Should I call the Orkin Man or my useless Troll?

CHIP: We defeated the Wicked Bitch and brought back her rain gauge like you requested.

FUZZYWIG: You want us to put it in the new garden I plant once you legalize MARIHUA…

SHADOW: Just…. put it over there in the corner with the rest of the useless shit I send the peons who visit me on inconsequential fetch quests for.  And please don’t let the 50 foot tall doors hit you on the way out….

MITZI: But you, like, have to totally give us our wishes now!

SHADOW: I have to do no such thing!  Nobody tells the great and powerful Gizzard of Blahs what he totally has to do!!!

The Gizzard is not amused……

SHADOW: You should feel fortunate to even be spoken to by such a superior being such as myself!!!!!  I would advise you to exit my chambers AT ONCE, or I’ll curse every commode you ever sit on again to be swarming with alligators!

FUZZYWIG: And mother always told me I shouldn’t trust my drug runner.  Hmph!

While the rest of the party stands stunned as the fiery Gizzard continues to berate their unmitigated gall, Fleabag smells a rat………..

SHADOW: And furthermore, I will personally have a plague of crabs descend upon each of you that can’t be cured by even the strongest pesticides in the land…

The Gizzard makes an audible gasp as he realizes his true identity has been revealed.  He yanks his cover back and quickly comes up with some lame explanation… 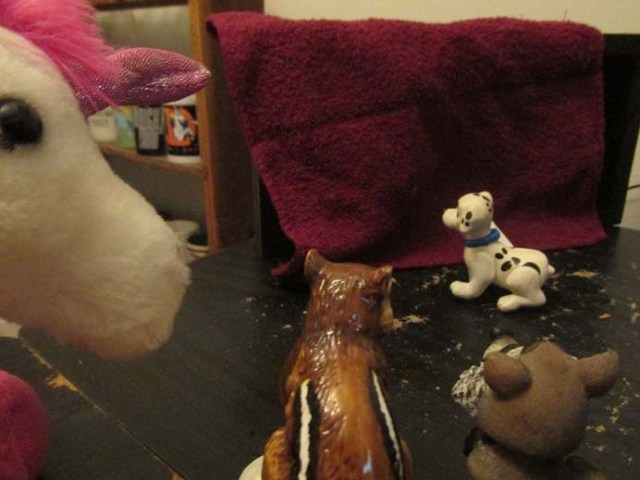 SHADOW: PAY NO ATTENTION TO THAT ELF BEHIND THE CURTAIN!!!!  He’s only doing… um…. system maintenance!  Yes, The Gizzard of Blahs app will be unavailable for four hours Wednesday evening while my database is being worked on… 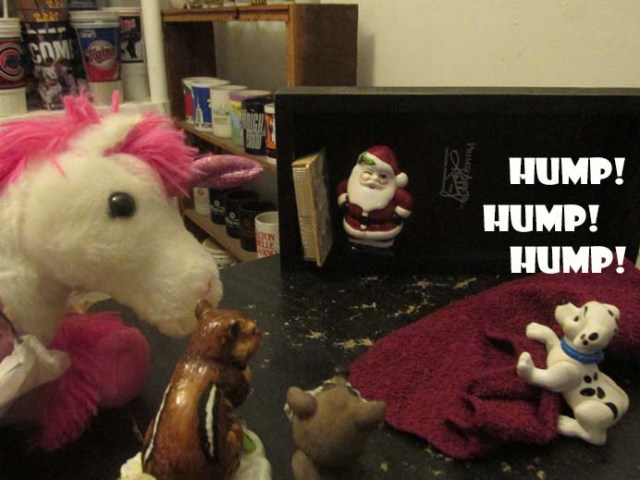 Time to give it the gag, dude…

SANTA: Hey!  Whoa!  Don’t use that word around me, or I’ll sic the Ghost of Christmas Future on your ass!

MITZI: My babies were, like, totally right about you way back in Part III!  You are a con man!

SANTA: I am not a con man!  Nor a crook!  I’m a jolly old elf, but apparently a pretty shitty gizzard.

FUZZYWIG: So, are we gonna get what we most desire, or is that just part of the prank too?

SANTA: Well… I guess I could give you some toys.  Could I interest any of you in an ninja on a skateboard?

SANTA: I’m guessing by all of the evil eyerolls, that’s a no.  OK, I don’t want to ruin the whole damned story since it’s taken up three fucking months to tell this monstrosity so far… so I’ll see what I can whip out of Santa’s sack for you all.

SANTA: Down girl!  You’re only getting one wish, and I don’t think you want to waste it on a visit to Santa’s North Pole.  At least, not in front of everybody here.  OK, let’s get this over with.  You, the ugly looking raccoon…

FUZZYWIG: Do I get to sit on your lap?

SANTA: Fuck no!  Now, you want me to legalize MARIHUANA so you can grow your stinkweed unfettered and corrupt the impressionable youth of Blahs, is that right?

SANTA: Do you have any idea how many politicians I’d have to get involved in passing that little piece of groundbreaking legislation?  This isn’t fucking Schoolhouse Rock, dude!  I’ve strip mined this planet giving coal to every lawmaker in the world each Christmas, so I doubt I’m up for getting any political favors granted.

FUZZYWIG: Lovely.  I knew I could count on you, Giz…

SANTA: But there is one thing I can give you that doesn’t require Congressional approval…. a phony holiday!

SANTA: And so with this here proclamation, I hereby declare April 20th every year to be a national day of toking.  Get this to a few news outlets and on Facebook, and it’ll spread like fucking wildfire! 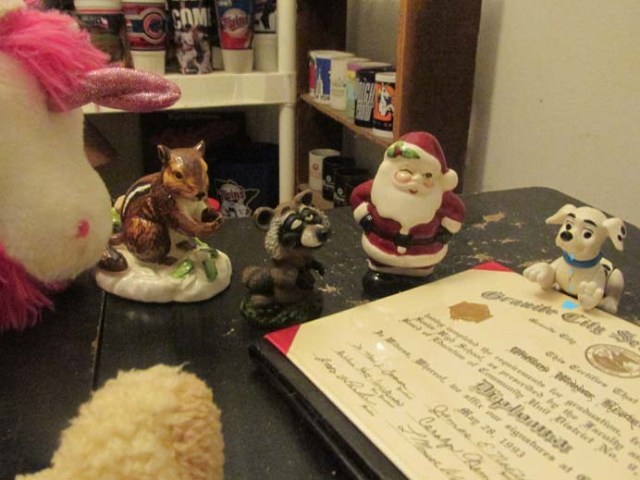 FUZZYWIG: This is just some idiot’s high school diploma.

SANTA: But the paper’s probably made out of hemp.

FUZZYWIG: Great.  Excuse me guys while I go smoke this proclamation… 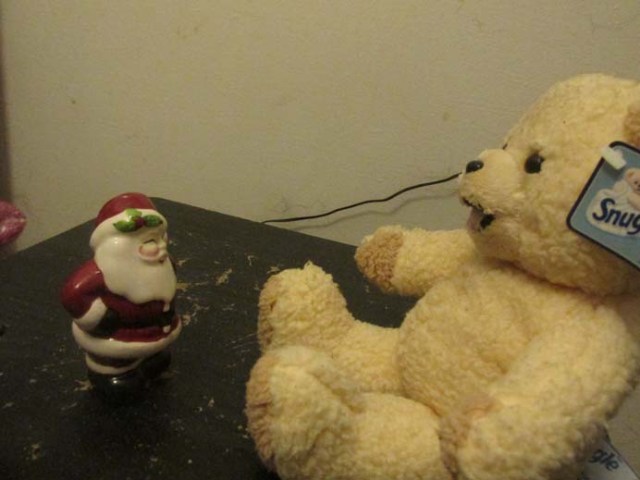 SANTA: I’m not about to give you a pair of big balls, but maybe I can make up for the quality with quantity… 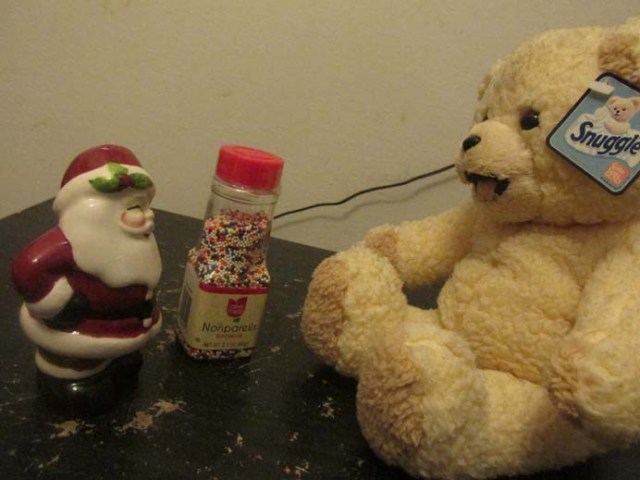 SNUGGLE: Dafuq is this shit?

SANTA: Remember in the real movie how the Tin Man wanted a heart and all the Wizard gave him was a fucking watch instead?  Well, I’m giving you candy!  Little, tiny candy balls… as many as you’d like.

SNUGGLE: (Pouring the bottle on his…. ummm…..) Yeah, the little girls will love my new balls now!  I just gotta get some chocolate syrup!  All you can eat Snuggle Balls!  I’m back in business, baby!!!

SANTA: I’ll send you my naughty list with addresses a bit later…. this is gonna save me a fucking fortune in coal this year!

SANTA: I don’t think there’s much I can do for you since I’m not a talent agent, and you’ve got no talent yourself.

CHIP: That’s not true!  (Pulling out a VHS tape) I have an extensive video resume of my work here, and…

SANTA: This calls for some outside help.  Someone even more powerful than I am…

ES: Tell me, Chip.  What’s this nonsense I hear about you wanting to leave my Shelf Critter Theatre troupe?

CHIP: Well…. you see, sir.  I just think that… you know, I’m just a normal critter and everything that happens around here is just so insanely stupid!

ES: You know how much I enjoy coming up with these completely fucked up stories for you critters to act out every Friday.  It’s my specialty, and there are so many fans out there who enjoy reading these…

CHIP: I only see two people out there right now reading this!

ES: Everyone in this troupe has their role that makes Shelf Critter Theatre the huge success that is it.  Even you, Chip.  You see, having a bunch of overly caricaturized critters just go out on stage and do warped shit and tiresome lame gags just wouldn’t be as funny if there weren’t a more serious, no nonsense critter nearby to act outraged or get caught up in the crossfire.  Chip, (pats Chip on the back hard enough to make him cough up a loogy) that’s a role you really excel in.  The Shelf needs you, and quite frankly, you need the Shelf.  Because if you ever left this troupe, Chip… 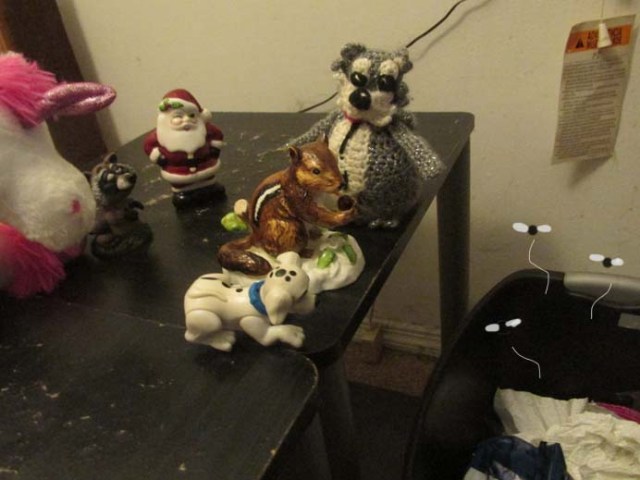 ES: …….I swear to fucking Dog I’ll pitch your mangy ass right in this goddamn dumpster, because it’d be a waste of time running you down to Goodwill just for them to put you out next to some old man’s used jockstrap!  Do you understand me, boy!?!?!?

ES: You’ll be lucky if I don’t have you scraping the possumshit out of the morgue tomorrow!!!  Now get back to work!!!!!

Evil Squirrel retreats back to his big creator’s desk in the clouds, and that just leaves…. 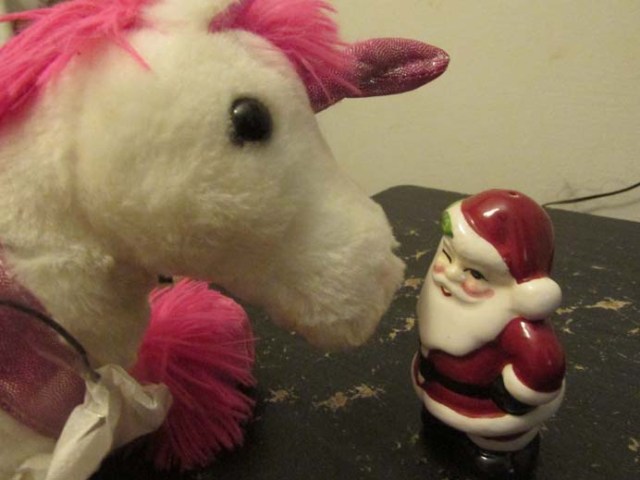 SANTA: Personal space, dear!  I’m pretty sure Mrs. Claus is one of our two viewers out there, and I don’t want to be sleeping in the reindeer barn again!  So you wanna go back home to the Shelf?  Well, I HAVE to go back there too since it’s almost time for me to let kids with snotty hands and shitty diapers sit on my fucking lap again!  I guess I may as well take you along with me…

MITZI: Santa!  Squeeeeeeee!!!! I’d, like, totally wuv to have a ride with you in a one whore open sleigh!!! 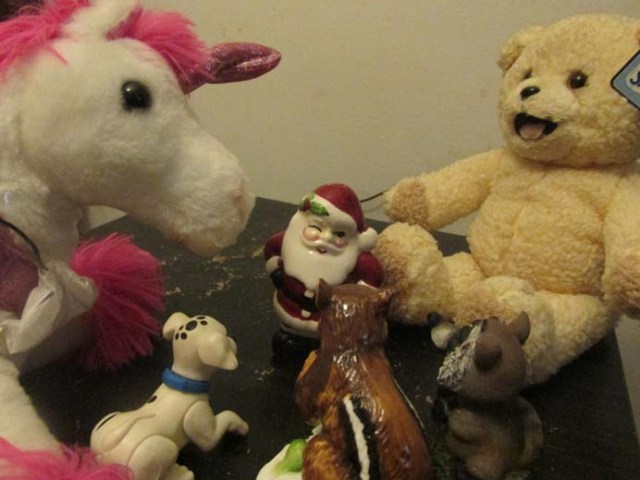 SANTA: Great!  Me and you will head out tomorrow morning bound for The Shelf…

SANTA: Yeah…. I’ll, um…. have you ride along Clark Griswold style tied to the back bumper.

MITZI: Thankies, like, so freaking much for all you did for us Santy!  You, like, make a pretty awesomesauce Gizzard after all!

SANTA: Yeah, whatever.  Look, I need to lay low until departure time tomorrow because now that I’ve revealed my true self, they might find me………….. 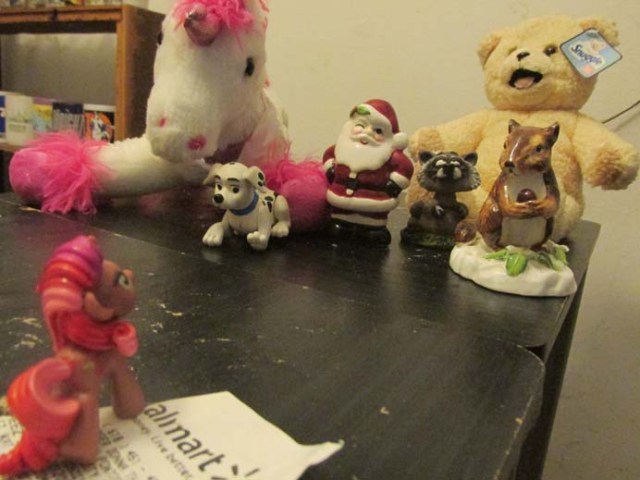 TINA: I knew if I waited around this city long enough I’d be able to give you my wish list!  Don’t worry, it isn’t too long……..

SANTA: An entire forest died just so you could write down all of the stupid shit you won’t be getting this year!

TINA: Don’t worry, Santa!  A new forest is on the list at #8,469, right between the pony and the ninja on a skateboard!

TUNE IN NEXT FRIDAY FOR THE FINALE OF THE GIZZARD OF BLAHS!

Bored former 30-something who has nothing better to do with his life than draw cartoon squirrels.
View all posts by evilsquirrel13 →
This entry was posted in Shelf Critter Theatre and tagged bear, chip, critter, dog, fleabag, fuzzywig, mitzi, parody, raccoon, santa, shelf, snuggle, squirrel, theatre, unicorn, wizard, wizard of oz. Bookmark the permalink.

15 Responses to The Gizzard Of Blahs – Part XIV