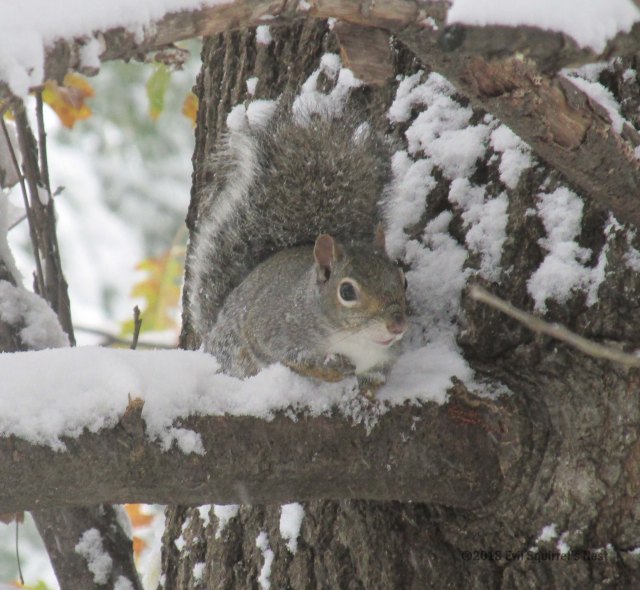 After getting teased with a couple “blink and you’d miss them” snow events earlier in the week, Wednesday evening into Thursday morning brought us our first real snow of the season… and our first significant snowfall since at least the winter of 2015-16.  What’s

more, snow on November 14th is almost unheard of where I live.  Stray flurries, sure… back in 1993, it snowed a tiny bit on Halloween for crying out loud.  But 4-5 inches of the white stuff in mid-November where the first snow is always after Thanksgiving…. preposterous!  And I think this chilly squirrel who braved the elements Thursday morning to pose for me would agree about this early blast of winter.  As these out of season snows tend to go, it was sunny and relatively warm yesterday, and now most of the early bird snow has melted into the water table.

I’ll have some more snow squirrel pictures to share in future Saturday Squirrel installments… mostly of this guy.  You can thank Trisha for demanding that I get squirrel in the snow pics!

Bored former 30-something who has nothing better to do with his life than draw cartoon squirrels.
View all posts by evilsquirrel13 →
This entry was posted in Saturday Squirrel and tagged adorable, cold, cute, photo, photography, snow, squirrel, tree. Bookmark the permalink.

9 Responses to The Cold November Snow