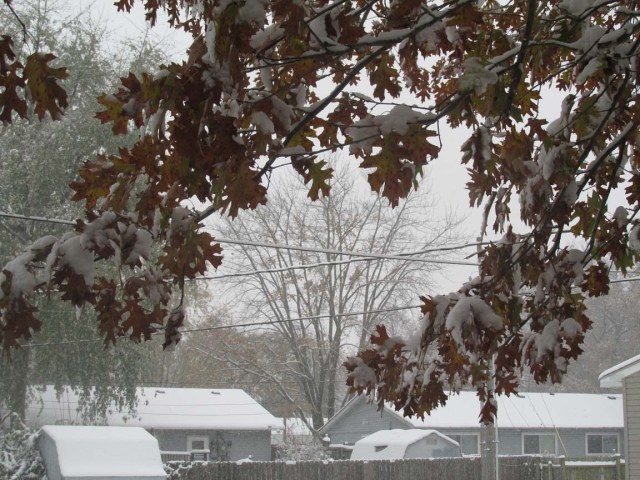 How in the hell did a photo taken just a little over two and a half weeks ago end up in this countdown that started in June?  Well, I had second thoughts about the entry I originally had in this spot… and this photo I took during our early season mid-November snow was more than enough to tempt me to make the switch.  While I was patiently waiting for the lone squirrel who was lingering in the tree to come out where I could get pictures of him, I happened to accidentally shoot a picture much like this one… which first made me notice how weird it was for me to see snow covered autumn leaves!  This was the first time I remember there being an accumulating snow where I live before Thanksgiving, and usually the last remnants of the dead leaves are long off the trees before the first coating of white comes along.  So, we have yellow and brown oak leaves with a nice white coating.  It’s a different type of Fall foliage beauty…

Bored former 30-something who has nothing better to do with his life than draw cartoon squirrels.
View all posts by evilsquirrel13 →
This entry was posted in My Top 200 Photos and tagged autumn, fall, foliage, leaves, photo, photography, snow, tree, weather, winter. Bookmark the permalink.