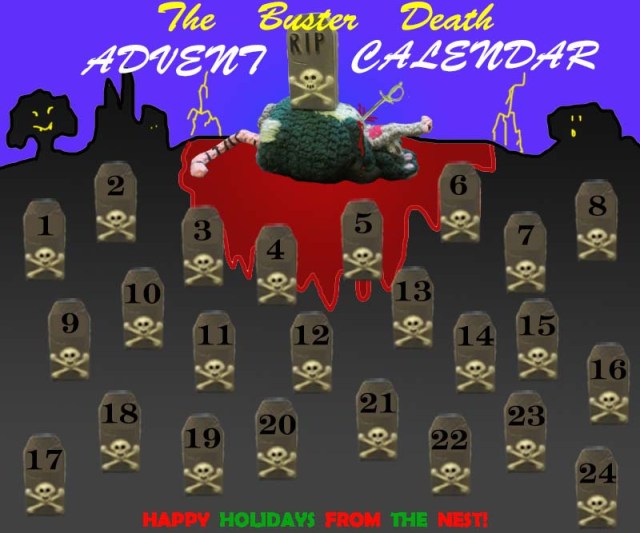 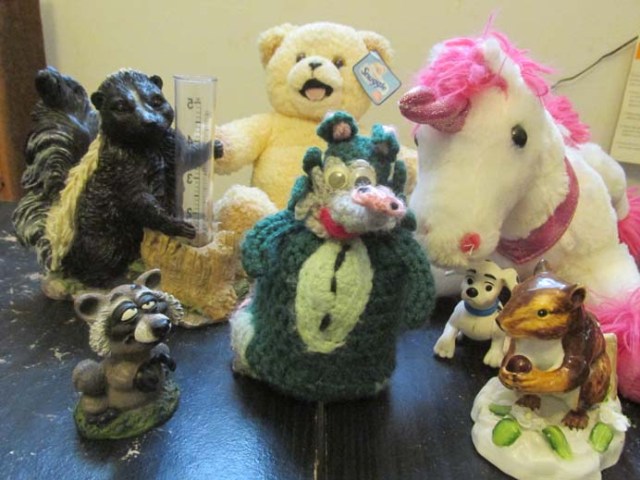 FUZZYWIG: “Surviving” being a relative term, of course.

SNUGGLE: Dude!  You’re a real badass to take all that punishment and always come back for more!

CHIP: On behalf of everyone here at The Nest, Buster, we want to honor you with this award! 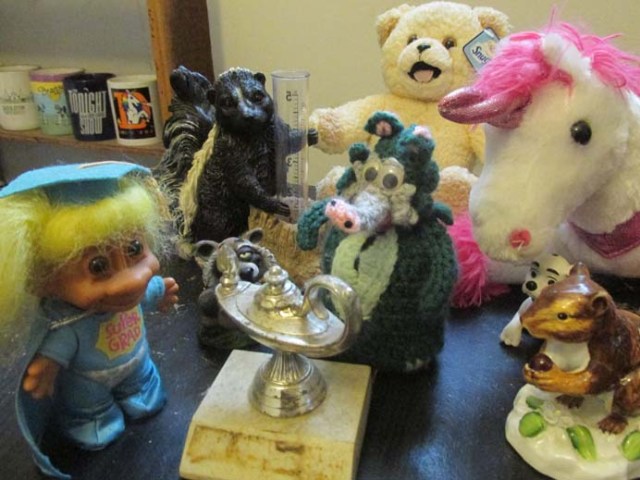 TROLL: Careful!  I just put a brand new coat of lead paint on that thing after I stole it from the bowling alley!

CHIP: Buster, today marks the seventh anniversary of Evil Squirrel’s Nest… and your constantly getting killed in stupid ways has been one of this blog’s most enduring gags.

RAINY: You mean like the perpetual drought on this godforsaken Shelf?

FUZZYWIG: We’re glad that you were able to cross over from the comic strips to provide Shelf Critter Theatre with one more pathetic way to get cheap laughs out of our audience.  We’d probably all be sitting in the bargain bin down at Goodwill now if it weren’t for you.

SNUGGLE: Nothing, dude!!!  You’ve earned it!

MITZI: In a show of our, like, gravitude, we’re totally not going to kill you today!

BUSTER: (Fighting back crocodile tears) This is…. the happiest day…. of my entire…..

CHIP: Ummmmm….. was this in the script?

FUZZYWIG: I don’t know… I think I smoked my copy of it.

CHIP: (Feeling for a pulse) He actually died!

TROLL: Well, since Buster won’t be needing this trophy anymore, I’ll see if I can hock it for enough to get some “liquid breakfast”…

CHIP: So on a day Buster wasn’t supposed to get killed, he ends up dying of natural causes!  Isn’t it ironic?

On behalf of myself and all of the critters (living and dead) at The Nest…. have a Merry Christmas!!!

Bored former 30-something who has nothing better to do with his life than draw cartoon squirrels.
View all posts by evilsquirrel13 →
This entry was posted in Advent Calendars and tagged advent calendar, anniversary, award, blgoaversary, blood, buster, chip, death, fleabag, fuzzywig, mitzi, rainy, snuggle, troll, zeeba. Bookmark the permalink.