TWILIGHT: Excuse me, sir.  You’re going to have to step aside for a more detailed check.

TWILIGHT: Sorry sir, but we must protect national security from terrorists like yourself.  AJ!  Put on some gloves!  Cavity search, front and center!

APPLEJACK: Is it alright if I just keep wearing the same pair I performed the last six cavity searches with, Sugarcube?

SNUGGLE: Hey, wait a minute!  How come he gets to pass through?

TWILIGHT: Because he doesn’t look like a threat to anyone.  Now please cooperate, sir.

FUZZYWIG: I call out vital airplane equipment and you say “Check” if it’s working.  Didn’t they teach you this in co-pilot school?

FUZZYWIG: Wonderful.  We’re so fucked.  Have you pulled up the weather report for our flight path?

RAINY: I have, and it’s disastrous.  It’s going to be clear skies all the way.  Not a single storm or drop of rain.

FUZZYWIG: Shouldn’t you be busy chipping some more cubes off the blue ice to serve our passengers, stewardess?

SNUGGLE: Dammit!  Getting delayed by those Rent-A-Gropers at security’s made me late!  All the good seats are taken! 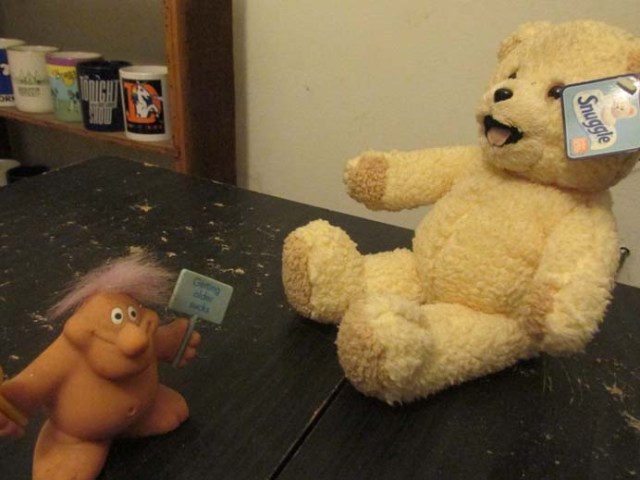 SNUGGLE: I don’t see anybody sitting there!

BUB: Since I weigh more than 300 pounds, airline regulations made me buy two seats.  So I’m resting one of my rolls of flab on it.  (Pulls two tickets out of his navel) See?

BUB: Are you sure?

SNUGGLE: Positive!  I’m going to make the stewardess escort you…

BUB: NO!  She’s already sprayed me once for sneaking two bags of peanuts off the cart!  I’ll find my own way to the cargo bay, thank you…

Bub vacates his seats and Snuggle Bear makes himself comfortable…

SNUGGLE: Ahhhhhh, now this is the only way to travel!

SPARKLEPONY: Hey!  Watch how far you’re leaning back, mister!  Rainbow Donkey, do something about this!!!

FUZZYWIG: (DING!) This is your captain speaking.  Welcome aboard Shelf Critter Airlines Flight 420 bound nonstop for Bumfuck, Egypt.  We’ll all be flying as high as a kite in just a moment, but first, here’s your stewardess with some important safety instructions you can all feel free to ignore… 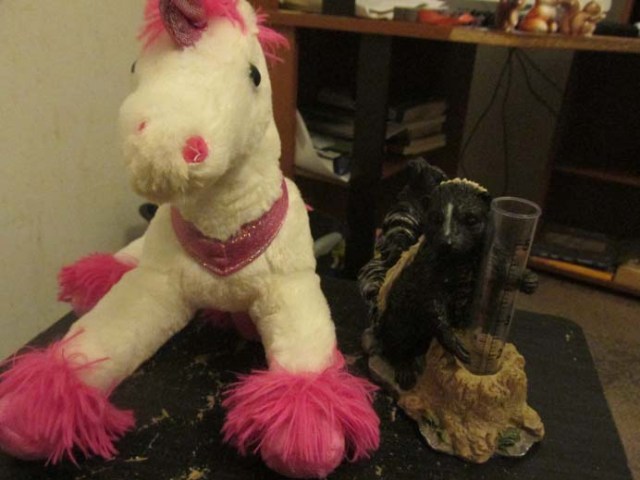 RAINY: In the unlikely event the cabin experiences depressurization, helium masks will drop from above your seats.  Should we experience a water landing because our pilot misses the runway yet again, your seats can be used as a flotation device.

MITZI: You can also, like, use THESE as flotation devices!!!

RAINY: One of those babies had a mustache, you floozy!  Now I’m closing the door…. what’s this?  A last second passenger?

BUSTER: Sorry I’m so late!  I was accidentally put on the no fly list due to a secretarial error and just had to have all of my cavities searched.  But I made the flight!  What a lucky day!!!

BUSTER: There we are!  I guess we’re going to be seatmates!  My name’s Buster!  What’s yours?

SNUGGLE: Shouldn’t you be sitting in the No Class section? 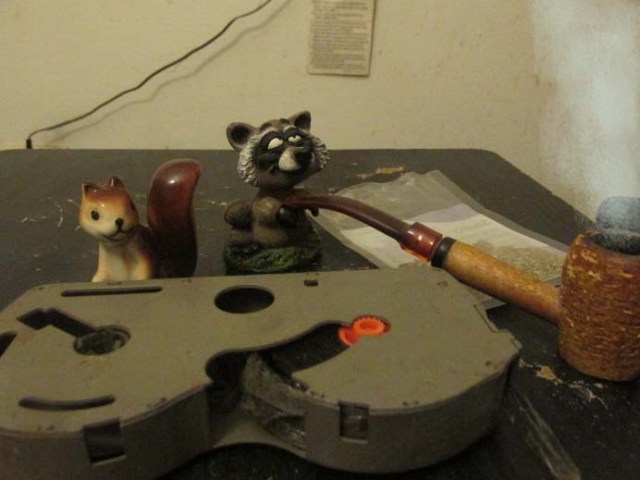 FUZZYWIG: Now that we’ve reached cruising altitude, it’s time for me to leave on my own jet plane…

RAINY: I thought this was a non-smoking flight!

RAINY: There is NOT! 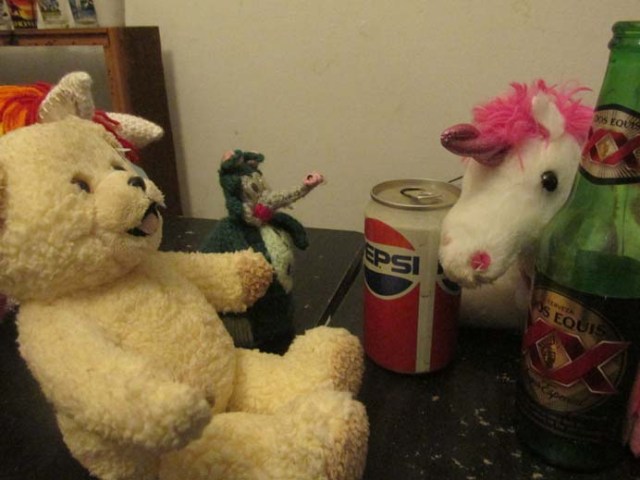 MITZI: Excuse me sirsies.  Could I, like, interest either of you in some drinkies?

SNUGGLE: I’ll take some milk straight from the tap!

BUSTER: None for me, thank you.  Caffeine gives me the runs and I’ve already sharted myself since I sat down.

SNUGGLE: Dafuq!?!?  Hey, I wanna join the mile high club too!  I’ve got a sharp object here that needs to be confiscated…

The bathroom door slams behind Mitzi and Buster, leaving Snuggle to tend to his own turbulence.

TROLL: Uh oh.  Looks like Flight 420 is veering off course and is heading for the capital city’s airspace.  I should alert the President…. no wait!  It’s time for my break!  I wonder if this stupid beeping screen can get Netflix?

ZAC: This is like cool!  So freaking cool!  Cool beans and rice!!! 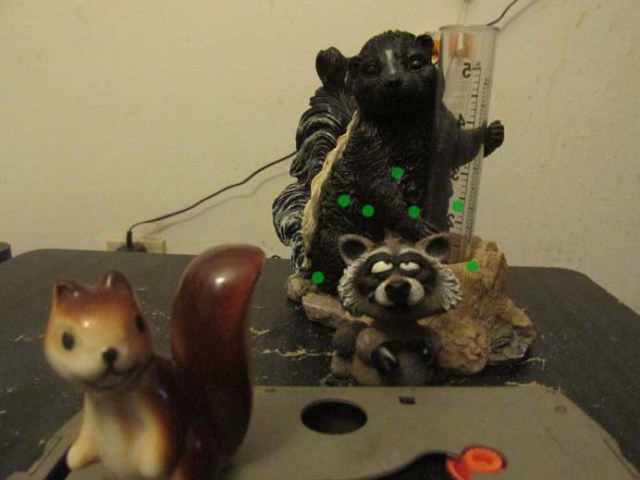 RAINY: Captain!  We’re supposed to be headed to Egypt and there’s icebergs outside the window!  Are you sure we’re on the right course?

FUZZYWIG: A horse is a horse of course of course, and no one can talk to a flying horse, that is of course…

RAINY: Mitzi, we need to take control or we’re going to crash and lose our jobs!  You go calm down the passengers while I activate the autopilot!

RAINY: The control’s got to be here somewhere… maybe this big flashy button that says “AUTOPILOT?” 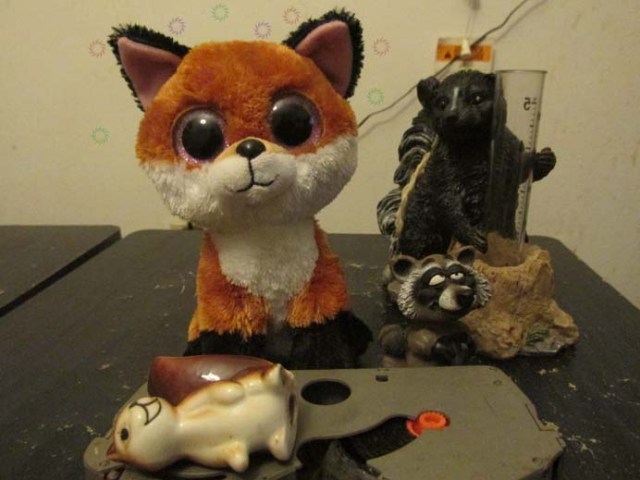 RAINY: I hope you know how to fly this plane better than the two lit pilot lights we have! 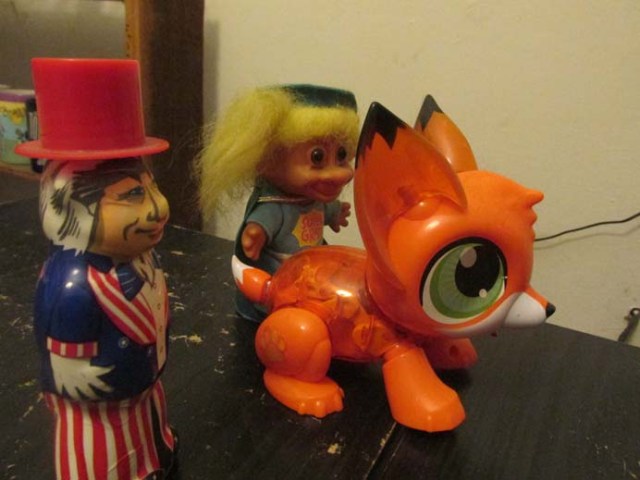 TROLL: Are you sure you want to shoot down a passenger plane, sir?

UNCLE SAM: Son, that plane is a threat to our freedom!  Besides, I can easily just blame it on Canada.  Now blast that terrorist plane out of the sky!!! 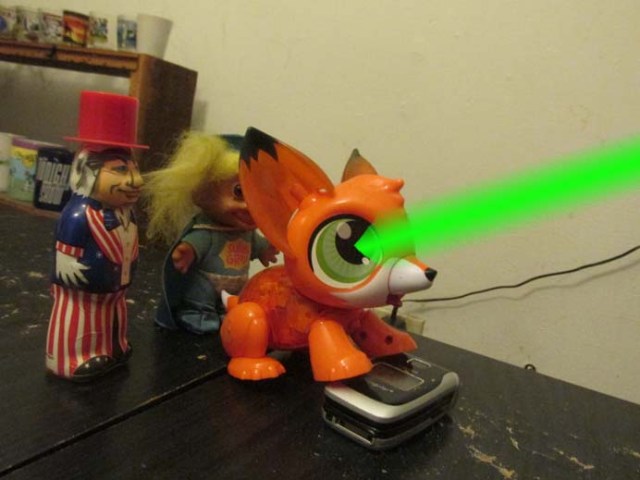 TROLL: I think we hit it!

TROLL: Oh fuck!  I hit Santa’s sleigh!  Now I’m not going to get that pony I wanted for Christmas!

SAM: Sigh…. I guess the Critters in Black will have to sweep this one under the rug.  I’ll bet that jolly fat bastard was working for ISIS anyway… 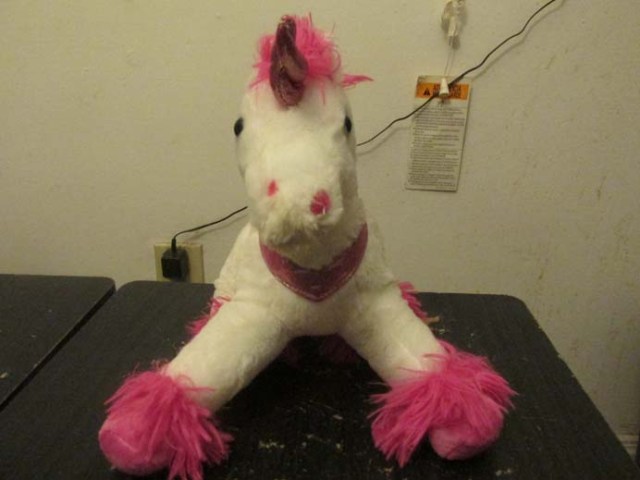 MITZI: Like, can I have everyone’s attention deficit please?  We’re totally going to crash, and…

SNUGGLE: I’m too young to die!!  This is awful!!!  (Turns to Buster) How can you look so calm at a time like this?

BUSTER: Oh, I’m used to it.  In fact, this is my fifth plane crash this week…

SNUGGLE: I can’t die a virgin!!!  Wait, I’m not a virgin… but maybe…. HEY!  Any ladies here got a cherry that needs popped before we all crash!?!? 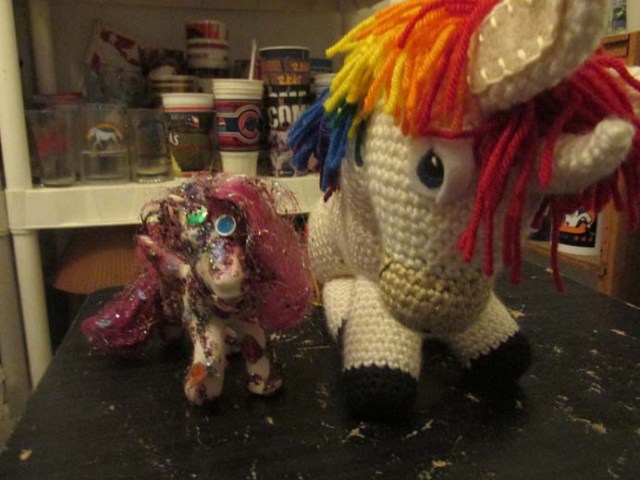 SPARKLEPONY: I can’t die!  I haven’t seen the finale of Shelfton Abbey yet!  Rainbow Donkey, do something!!!!

RD: I guess I could use my magical powers to get out of this predicament.

SPARKLEPONY: Hey!!  Where did you go, you no good…. I swear to Dog, I’ll come back to haunt you AND get posthumous alimony!!!

RAINY: We’re spiraling out of control!!!  Do something, you no good blow up doll!!! 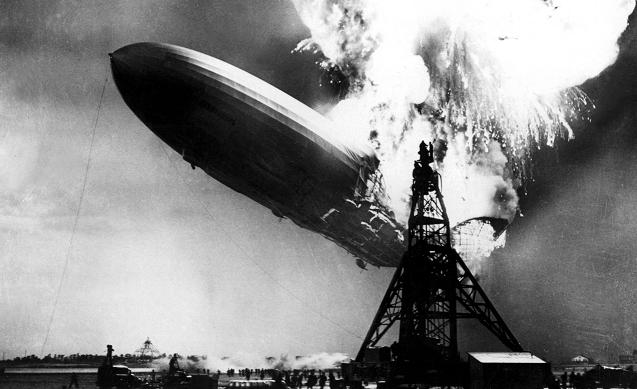 Flight 420 crashes into the middle of the ocean….

SNUGGLE: (Splashing around like a drowning rat) Got to…. make it…. can’t…. die…. where’s the stewardess with the floating boobies when you need her?

Snuggle reaches out for a floating seat from the plane.

BUSTER: Oh here, let me help you onto this lifeboat!

Snuggle grabs ahold of Buster’s arm….. and promptly flips him into the ocean. 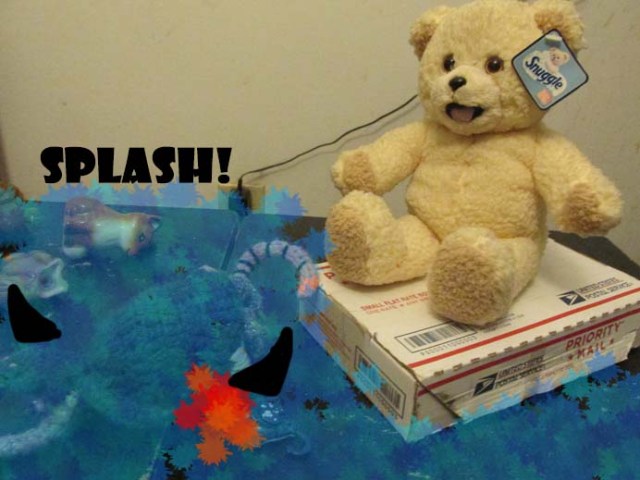 SNUGGLE: So long, shark bait!!!  I’ll make it out of here alive even if it kills me!

CHIP: Shelf Critter Airlines Flight 420 reportedly crashed over the open sea today in what is being considered the most fucked up disaster in aviation history.  FAA officials have thus far failed to locate the aircraft’s black box, but did discover during the search the body of Jimmy Hoffa, the lost continent of Atlantis, and my car keys.  All 69 passengers and crew members aboard the plane are believed to be dead.

MARY: Dammit!!!  I wanted to be the one to read that story with a gleam in my eye!  It’s interesting when people die.

CHIP: And that’s all the dirty laundry there is to report.  This is Chip Squirrel at the SCT News desk saying goodnight, and please stay tuned for another thrilling episode of Curling For Dollars. 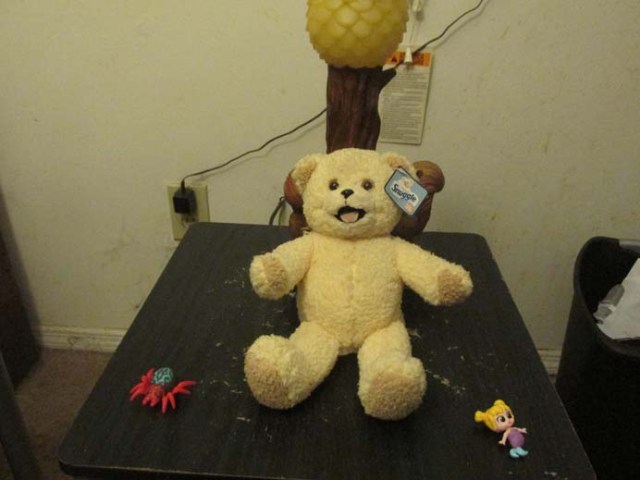 SNUGGLE: I made it!  After all those weeks of floating in the sea drinking my own sweat to stay alive…. I’m on this desert island!  What’s that noise?  Tribal music?  Oh, I’ll bet this is the island with all those Amazon chicks on it!!!  Yeah, this is awesome!!!  I not only survived the crash, but now I’m all alone with about twenty sexy warrior babes!!!  Oh, I hear one coming now!!!

SNUGGLE: NOOOOOOOO!!!!  Where are the island girls at!?!?

BIG SCRAT: Eh, I washed up here five years ago and got a little hungry.  They weren’t my type, you know.  But you…. well, looks like I won’t have to be cutting holes in coconuts anymore to take care of my blue balls!