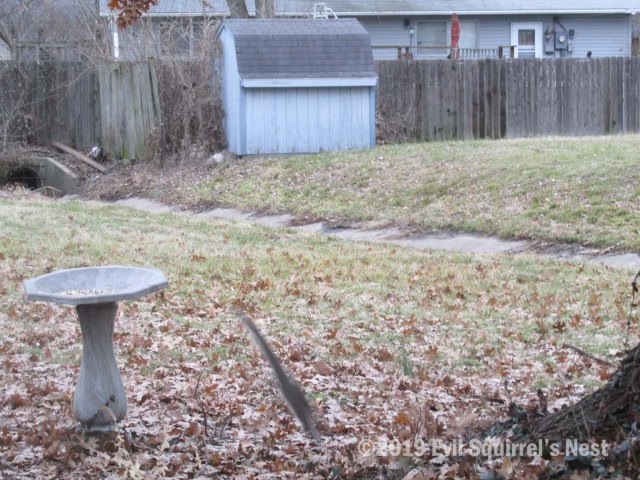 Nobody will ever recognize me at this supersonic speed!

Squirrels can move pretty fast when they want to…. but this is ridiculous!  I anticipated this squirrel jumping out of my birdbath “feeder” just right to catch him in midair.  That

blurry gray shape you see in the lower middle section of that photo is supposedly that squirrel.  You can make out the tail and the back half of his body… but apparently the rest of him got sucked into a wormhole somewhere.  What does the fifth dimension look like there, pal?

Then again… this is probably just my usual shitty photography aided by the overcast skies that dominated my time off last week.  There’s a Saturday Squirrel in this photo…. you’ll have to take my word for it.

Have a great weekend everyone!  If the forecasters are correct I’ll be buried in snow by the time this post goes live…

Bored former 30-something who has nothing better to do with his life than draw cartoon squirrels.
View all posts by evilsquirrel13 →
This entry was posted in Saturday Squirrel and tagged birdbath, blurry, fuzzy, jumping, photo, photography, squirrel. Bookmark the permalink.

19 Responses to The Flash