Not Necessarily The News

CHIP: Good afternoon viewers out there in Nestville… this is the 4:00 News on SCNN.  My name’s Chip Squirrel.

FUZZYWIG: And my name’s…… um….. I can’t read the TelePrompTer.

CHIP: My co-anchor’s name is Fuzzywig.  Our top story today…

CHIP: Police are investigating a suspected incident involving animal abuse that happened around dinnertime yesterday evening near a seedy looking Chinese buffet.  The alleged perpetrator of this crime against canines is believed to be this man…

CHIP: Belly Hung Lo, Age 64, from Chinashelf.  According to investigators, Mr. Lo bit into a dog who wandered onto the premises sometime that evening.  When asked why he committed this heinous crime, Mr. Lo responded, “Dog tasted good.  Here, have fortune cookie!”  The name of the victim of this crime has not been released yet pending the results of microchip analysis, however it is believed to be this mutt who is 77 in dog years…

CHIP: The pitiful pooch will be up for adoption after he fully recovers from his injuries, or whenever his insurance maximum is reached, whichever comes first.

CHIP: He looks an awful lot like your dog, Fuzzy.

FUZZYWIG: Can’t be.  I sold my mutt to the Chinese buff…. er, to some guy who runs a dogfighting ring last week.

FUZZYWIG: An impromptu protest brought traffic to a halt during rush hour this morning as a critter laid down in the middle of the road on Highway 13 and refused to get up.  SCNN’s Mary Mutton is live on the scene with complete details of this situation as it unfolds.  Mary?

MARY: Well Fuzzy, it looks like the rogue protester is still sprawled out in the road tying up traffic and forcing me to walk fifty blocks in my high heels to get down to the scene!  Let’s see if I can find the cause of this chaos… excuse me, sir!  Mind if I ask you what cause this act of defiance is intending to draw attention to? 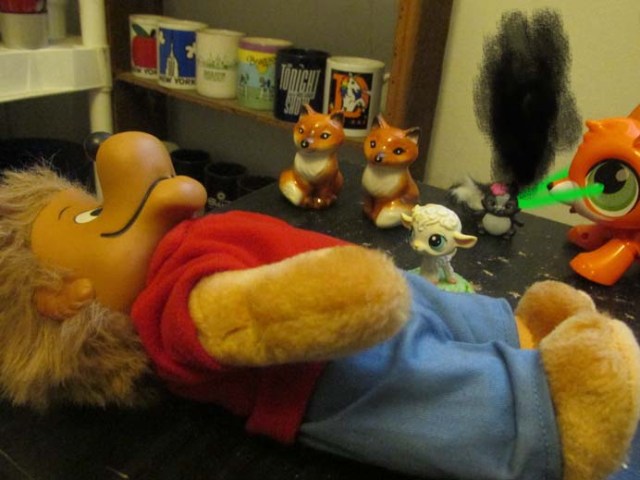 MARY: What issue is so important to you that you’re laying out here in the street blocking progress?

BROTHER BEAR: Oh, that!  I fell off the truck that moves me around the soundstage and I can’t get up.

BROTHER BEAR: I can’t walk, I can’t stand.  I just kinda lay around… it’s all I can do.

MARY: So this isn’t some political action?  You’re just lazy?

BROTHER BEAR: It’s a manufacturing defect.  All I can do is lie here until someone calls a tow truck or moves me… 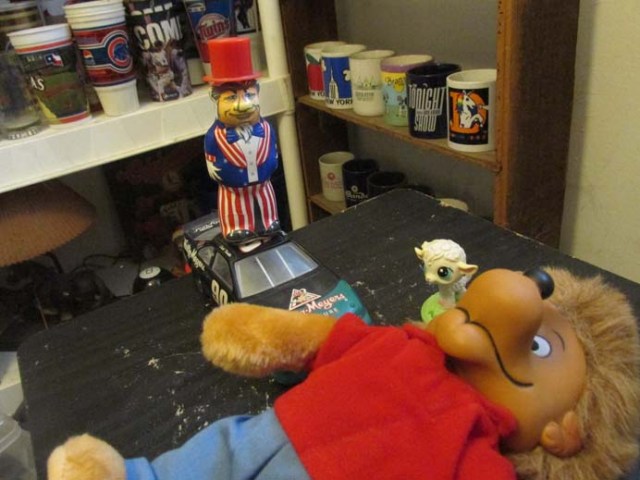 UNCLE SAM: (Driving a tank and holding a general’s rank) Son, you’ve got exactly five seconds to get your pathetic anti-American ass out of the road, or I’m gonna go all Tiananmen Square over your rabblerousing carcass!  Is that clear? 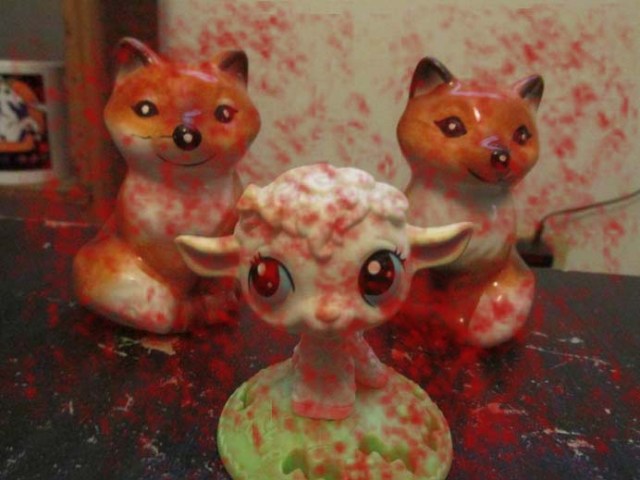 MARY: Well, it looks like this situation has ended peacefully, and just in time for the PM rush!  This is Mary Mutton reporting live downtown for SCNN, back to you guys in the studio.  (Turning to the bystanders) Anyone know a one hour dry cleaner who does wool?

FUZZYWIG: Good to see there’s something more exciting than cornholing going on downtown.

CHIP: The Critter Mafia has been inflicting its power and influence on The Shelf for over a century and eluding conviction for their crimes due to a strict code of silence within the gang.  Well, a member of the infamous Lasagna family has apparently turned informant, and in an SCNN exclusive has agreed to be interviewed by our own investigative reporter Shadow.  The informant’s face and voice have been distorted to protect his identity…

SHADOW: You’ve spent some 25 years working as the muscle for the Lasagna family, one of the more tight lipped crime organizations in the country.  Tell me why you chose to come forward and provide information that may bring these thugs down. 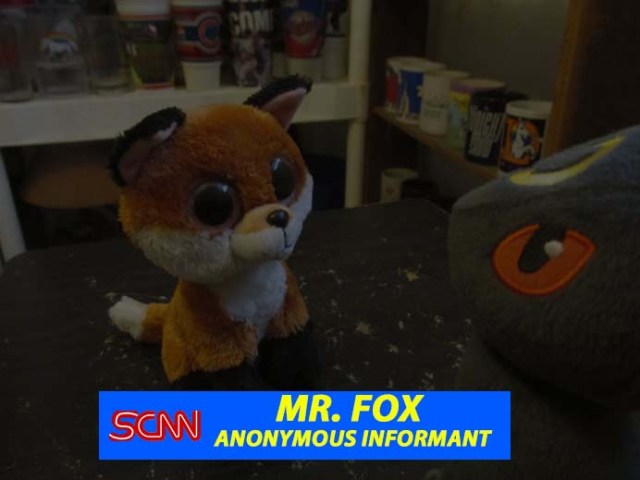 SHADOW: Fascinating.  Tell me something else, “Mr. Fox”…

SHADOW: Yes, of course your face is being blotted out for this interview.  We handle things in a very professional manner at the Shelf Critter News Network.  Our production team is very diligent when it comes to the fine details of a newscast…

TROLL: Yeah, come on…. fit in there!  I gotta beat my high score this time!  Then I can go back to working on those stupid graphics they want for the news today.  C’mon blocks!!!

FUZZYWIG: Should we go ahead and assign Mary to Mr. Fox’s “accidental” murder tomorrow?

CHIP: I hope she can put all those wool cleanings on the expense budget.

FUZZYWIG: I think it’s time for a report on the war in Shelfganistan.

CHIP: Yes, and SCNN has our best war correspondent embedded with the troops on the front lines.  Let’s hear from him now… 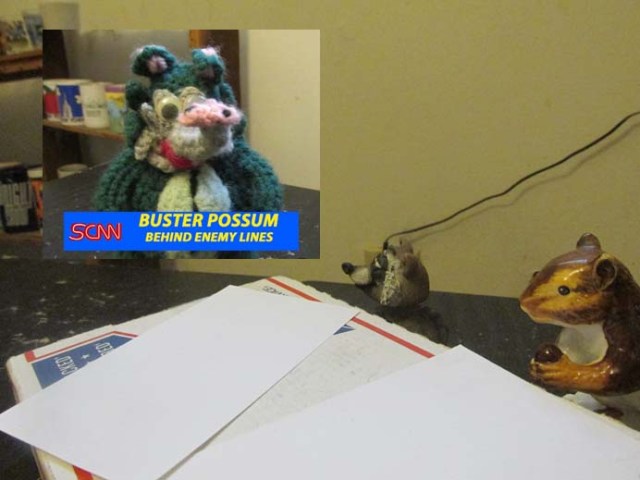 CHIP: Hello Buster!  How is the battle going halfway across the globe today?

CHIP: I can hear explosions and gunfire all around you, Buster.  Are you sure it’s safe where you’re reporting from now?

BUSTER: Absolutely, Chip!  I’ve never felt more secure in my life!  No chance of anything happening to me here….

CHIP: Hello, Buster?  Can you hear us?

FUZZYWIG: Probably not, I think I saw one of his ears fly off camera.

CHIP: We’ll get back to Buster later in the broadcast…

CHIP: Our next segment delves into the debate over corporal punishment in our school system.  Is it child abuse, or does sparing the rod spoil the child?

FUZZYWIG: I remember getting paddled by all of my teachers when I was in school.   And by the principal…. my guidance counselor… the lunch lady when I made fun of her mustache….

CHIP: Well, we can see in your case physical punishments didn’t work.  But here to debate this sensitive issue are a group of children from Evil Squirrel Grade School and SCNN’s own opinionated reporter Val Unicorn… 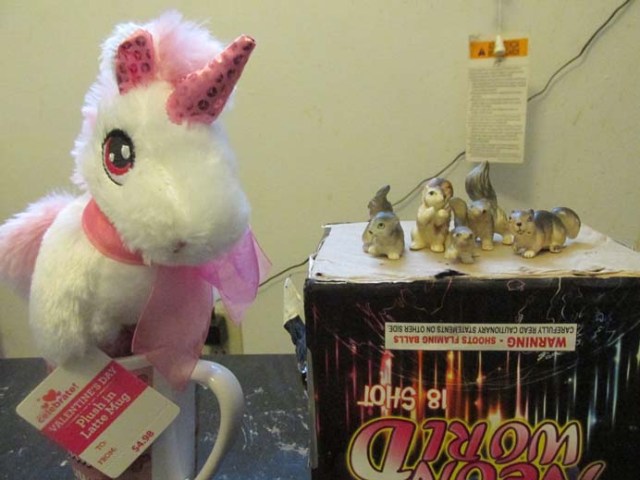 VAL: Damn, I’m not even going to have to open my big mouth to win this debate.  You little bastards need beat from one end of this studio to the other…

LITTLEST: I’ll tell Mommy if you do!

VAL: Let me tell you something you little twerps!  You know why I’m a crotchety old unicorn in my golden years?  Because of little assholes like yourselves who can’t respect authority and who have no fear of acting out because of pussified adults who stick up for bratty behavior.  I’ll bet your father doesn’t even use the belt on you little demons!

CHILD 4: Mommy hits us with the rolling pin, though!

LITTLEST: And she’ll use it on you if you don’t leave her little angels alone!!!\

VAL: Please.  Go away kids, you bother me… 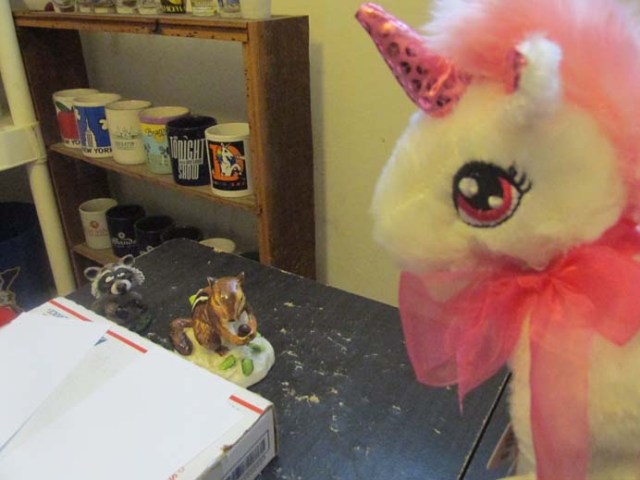 VAL: I win, again.  Back to you, Chip.  You know, that nastyass checkered suit coat you’re wearing makes you look fat and old…

CHIP: The opinions expressed by Val are not necessarily those of this station… or any other sensible critter for that matter.  Now it’s….

CHIP: I’m pretty sure that isn’t allowed on the air, Fuzzy.

FUZZYWIG: Why not?  It’s 4:20.  (Inhales) Blame the scheduling department…

CHIP: (Sigh) And since it’s twenty after the hour, that means it’s time for the weather report.  Let’s bring in SCNN’s chief meteorologist Rainy Skunk to tell us what to expect for the weekend… Rainy? 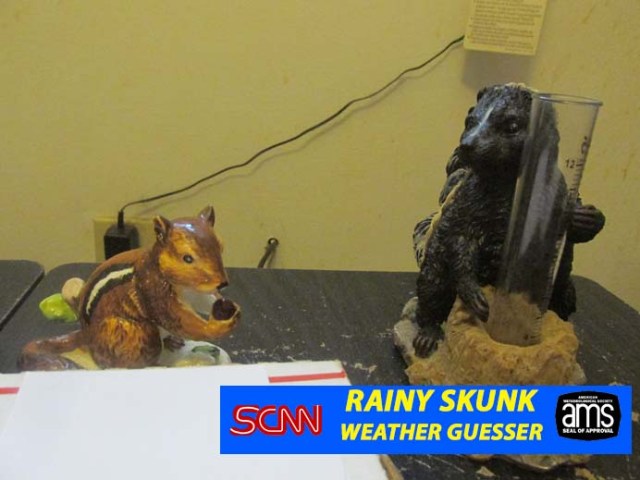 RAINY: Before I begin the weather segment, I’d like to mention I visited Miss Twilight’s third grade class at Evil Squirrel Grade School this morning to show them some neat weather experiments.

CHIP: That sounds lovely, Rainy!  Do we have video of that?

RAINY: No.  They were acting like little jerks and kept throwing spitwads at me, so I sprayed their asses!  Now let’s check on the current conditions.  As you can see from my EMPTY rain gauge, there was officially no precipitation recorded at Shelf Critter International Airport today.  That brings our precipitation total for the year up to a robust ZERO POINT ZERO inches. 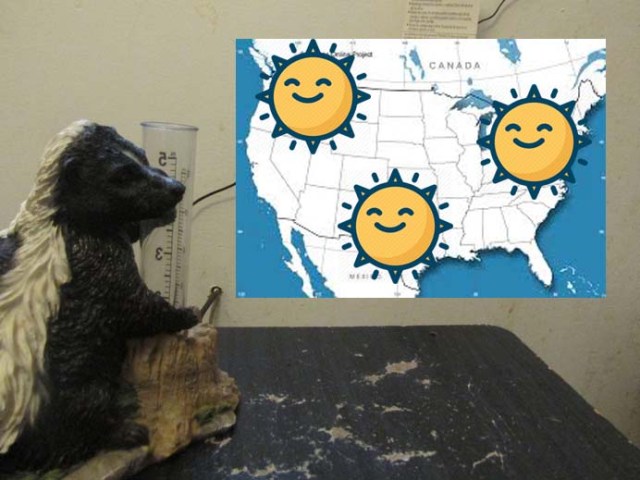 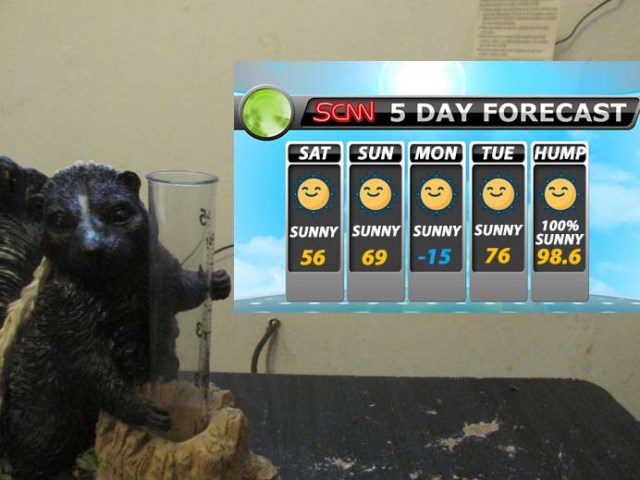 RAINY: This is really depressing.  It has to rain on this god forsaken Shelf someday.  You know what I think about the weather around here?

RAINY: Back to you, Chip! (Stomps off in a huff back to her dressing room)

CHIP: Well, that release of toxic air might spur the climate change Rainy is hoping for.

CHIP: Nevermind.  It’s time to bump it over to the sports desk where Snuggle Bear is… (fidgets with his earpiece) no wait, he’s live at the championship game?  What sport has their championship now?  Snuggle, where are you?

SNUGGLE: Dude!  I’m live on location at the Lingerie Bowl!  Man, the babes are out and about and wearing not much of nothing!  Hey, here comes the Most Valuable Bitch of the Lingerie Bowl right now!

SNUGGLE: Damn, girl!  You ain’t wearing nothing at all!  Is this another wardrobe malfunction?

MITZI: Mitzi’s, like, wearing something so sheer you totally can’t see it at all!  Oooh, the game’s started!  I, like, gotta get to the line of cribbage and bend over! 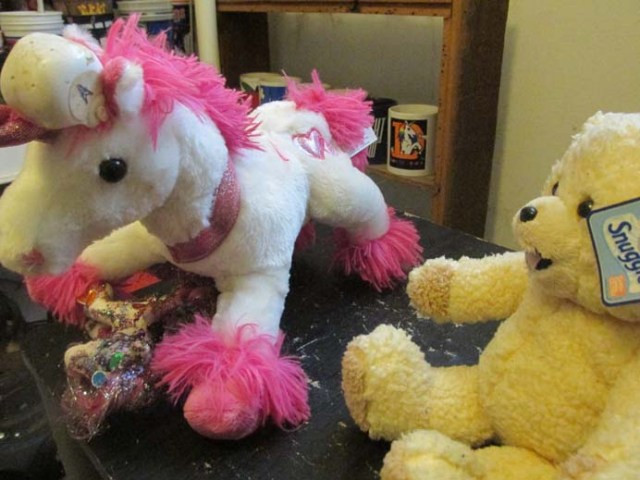 SPARKLEPONY: Dammit, Mitzi!  I’m on your team!  And this is touch football!

MITZI: Mitzi is, like, totally going to do plenty of touching while we’re in this position!

SNUGGLE: Damn, I’d love to stick around and see where this goes… but they won’t let the reporters on the field.  Guess I’ll go check out the cheerleaders instead!

SNUGGLE: No!  There can’t be male cheerleaders!  That isn’t right!

BIG SCRAT: Why not?  I’m wearing my lingerie.  What do you think of my mankini?

BIG SCRAT: Better yet, let’s go back to the locker room so you can see what’s under it!

SNUGGLE: (Being dragged under the stadium tunnel) Noooooo!!!  Someone send help!  Alert the media!  CHIP!!!!!

FUZZYWIG: I see nothing, man!

CHIP: For once, I’m with you.  And we won’t be filing a freedom of information request on that locker room footage.

CHIP: Finally, to balance out all of the shitty, fucked up news we reported on today… we’re going to end our program with our token good news story of the day.

FUZZYWIG: Yeah, this story involves a wild unicorn that broke loose from the zoo this afternoon and it’s magical encounters it had with the public while on the lam… 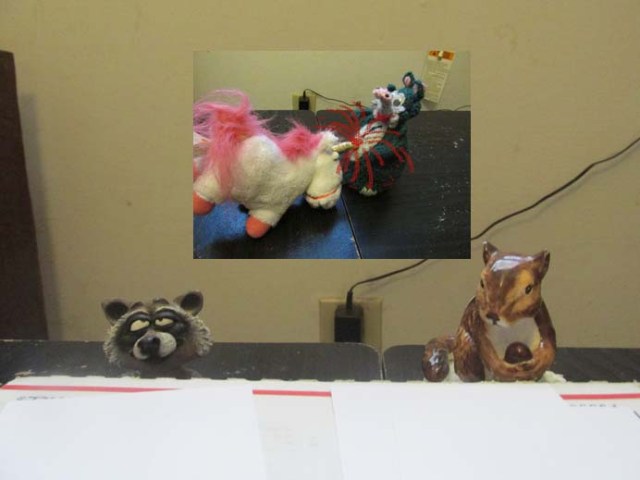 CHIP: Yes, this unicorn named George happily walked up to awestruck citizens and allowed them to pet him and rub his horn for good luck.

CHIP: The gentle unicorn made a particular impression on a young…. ummmm, why are the cameramen all snickering? 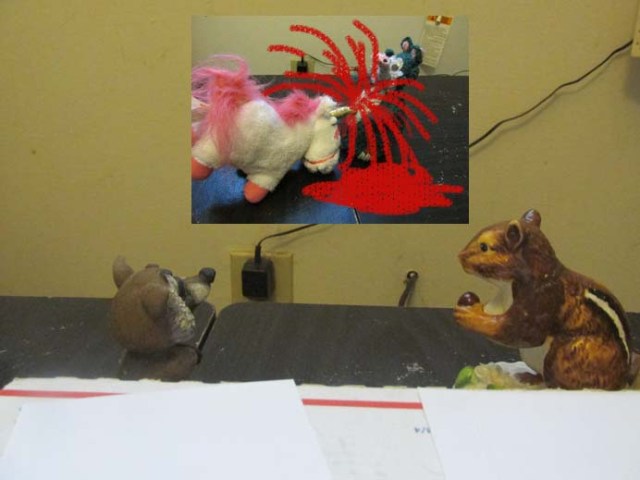 FUZZYWIG: I wonder if I should get a navel piercing?

11 Responses to Not Necessarily The News