CHIP: Fuzzy, what are you doing down here in The Nest’s mailroom?  Are you on one of your stoner walkabouts again?

FUZZYWIG: The boss wanted me to man the mailroom for a few days since the regular critter got reassigned.  It pays $4.20 an hour!

FUZZYWIG: Plus I can “confiscate” any deliveries addressed to Mary Jane, if you know what I mean…

FUZZYWIG: Ask and you shall receive.

SANTA: Now you know how I feel every December, putz!

CHIP: Santa as a postal carrier!?!?

SANTA: Hey, I gotta deliver something in the offseason!  Especially since that tightwad squirrel slashed the amount of PTO I get so I can’t spend ten months lying on the Costa Rican beach in my elfkini anymore!

FUZZYWIG: It’s gonna take a whole pawful of joints to get that image out of my mind…

SANTA: Well, Happy Postmas to all… and don’t forget there’s no delivery on Memorial Day!  It’s about fucking time I get some holidays off…

CHIP: Well, there sure is a lot of mail here to sort through.  Want me to lend a hand?

CHIP: This has got to be a scam!  It’s from a Doctor Dick Boner, and addressed to Mr. Snuggle Z. Bear or current occupant…

SNUGGLE: Dafuq, dude!?!?  Get outta my personal and private mail!  They told me this would come in a confidential and discreet package when I responded to their email!

CHIP: I find it hard to believe someone as preverted as you has erectile dysf…

SNUGGLE: SHHHHHHHHH!!!!!  Dude, I’m pretty sure there are Hippo laws being violated here!  It’s kinda hard for me to get it up sometimes when every time I turn around there’s that creep….

SNUGGLE: (Turns back around) That creepy Scrat always sneaking up trying to put his hot dog in my buns!  So yeah, I need a little help erecting my skyscraper sometimes (picks up his discreet delivery for his discreet package) now if you’ll excuse me, I need to prepare for my big date tonight with this chick I found online called Nighthawk! 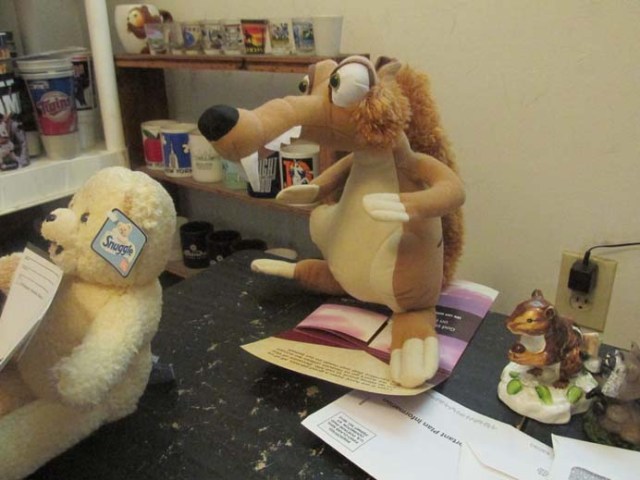 FUZZYWIG: Check this one out… it’s addressed to my stupid mutt!

CHIP: That’s not uncommon for pets to end up on mailing lists.

FUZZYWIG: It’s a summons for jury duty!  Yo, Fleabag!  You just got served!  And not on Hung Lo’s buffet this time…

Fleabag storms in to destroy the legal notice…

CHIP: Do you think they’ll arrest him for failing to appear?

FUZZYWIG: Eh, I wish.  He’d make a good juror too.  He’d even send his loyal master up the river on a trumped up charge.

CHIP: In all fairness, Fuzzywig, you have tried to sell your dog to be butchered numerous times.

FUZZYWIG: And is that a crime?  Of course not.

CHIP: Hey, what’s up with this envelope?  It’s all wet!

FUZZYWIG: Someone likes licking envelope glue a bit too much…

CHIP: It looks like it’s addressed to….. is that…? 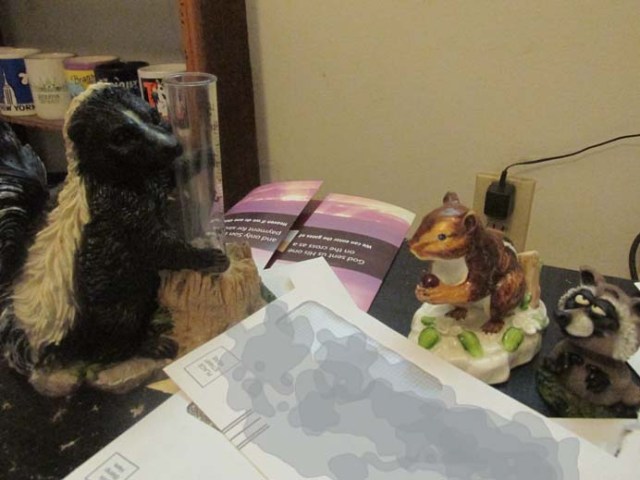 RAINY: Is that for me?  I’ve been waiting for my delivery of rain from the rain forest to show up for weeks!

CHIP: I don’t know how to break this to you, Rainy, but it looks like something happened in transit and all of the rain leaked out!

RAINY: What!?!? (Rainy takes a closer look at the soaked envelope) 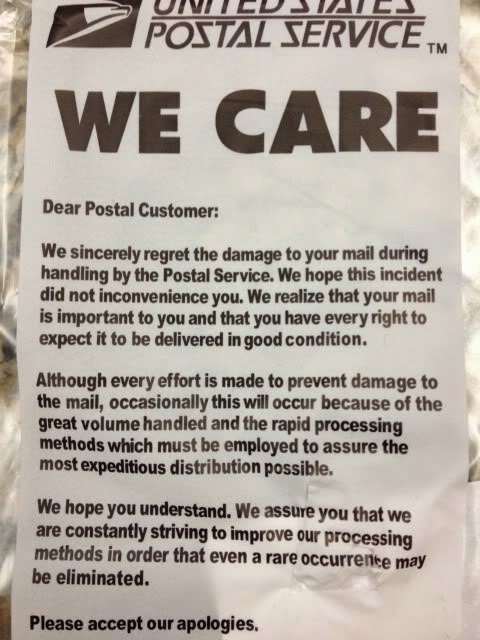 RAINY: Please accept their apologies for destroying my package of RAIN!?!?!?!?

RAINY: This is NOT acceptable!!!  I am going down to the post office to give them a piece of my mind!!!

CHIP: And no doubt a healthy dose from her other end too…

FUZZYWIG: First it’s post office shootings, and now post office sprayings.  At least they might put her picture up on the wall down there after it’s over…

CHIP: There sure seems to be a lot of mail here addressed to Buster.  Surely he can’t have a bigger fan club than I do…

BUSTER: Oh, those are just all my death certificates coming in for my demises in recent episodes! 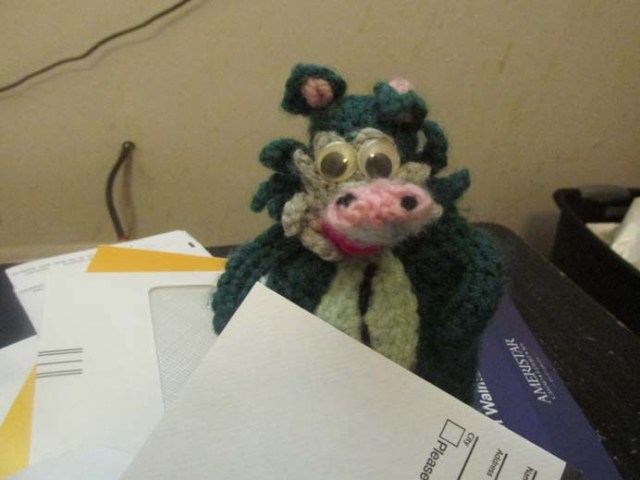 BUSTER: (Picks up an envelope) Yes, I think this one is from when I got burned alive by that nice dragon!  I think I’ll frame this one over the toilet… 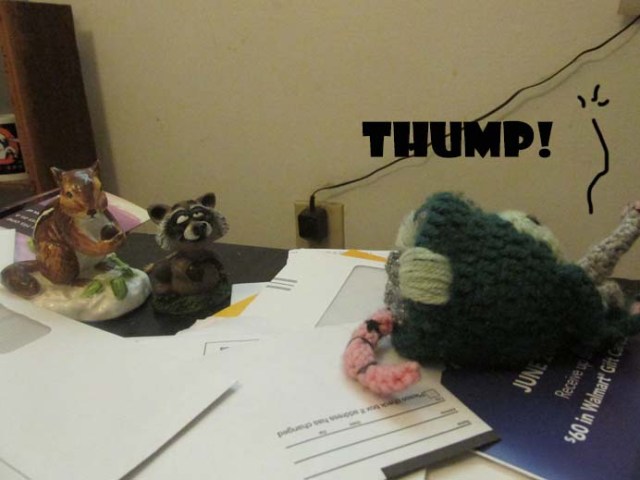 CHIP: There are no words for this kind of lunacy.

FUZZYWIG: Looks like the undertaker better get to work printing up Buster’s next Game Over certificate.

SQUIRREL CHILD 1: Is it from him?

FUZZYWIG: What’s got you little bastards all excited?

CHILD 4: It’s a letter from our pen pal!

CHILD 1: We asked him to send us some real, live ANTHRAX! 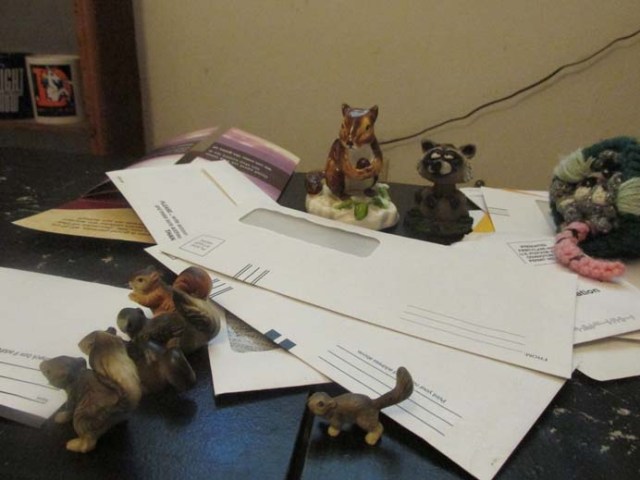 CHILD 2: This stuff is so awesome!

CHILD 3: We should bring it to Show and Tell!

LITTLEST: Wait for me, guys, or I’m telling Mommy!!! 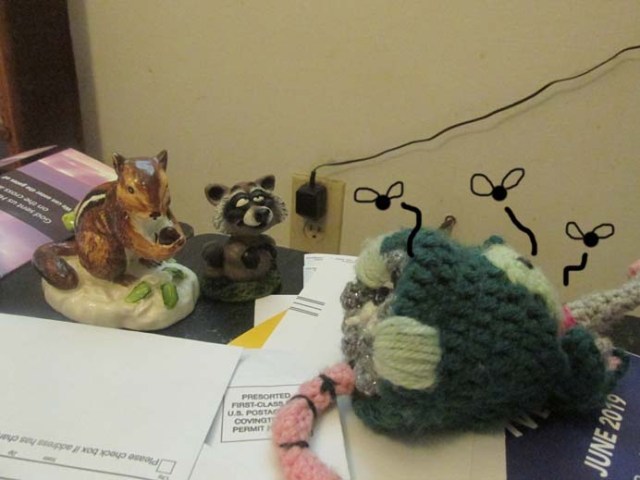 CHIP: Uhhhhhh, so what do we do with him? 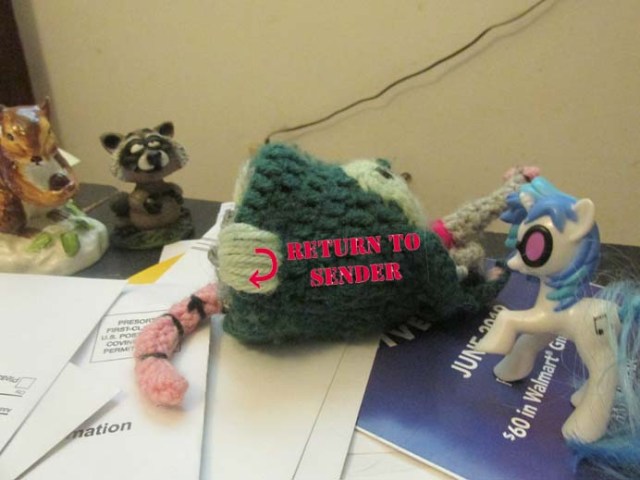 SCRATCHY: No such possum!  No such zone!

Scratchy hauls off the possum carcass to be deposited in the nearest mailbox. 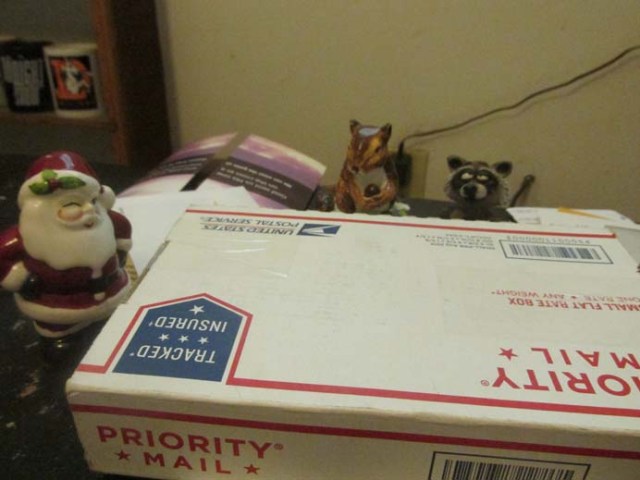 SANTA: This box was hiding down in the bottom of my sack.

CHIP: How can you lose something this big!?!?

SANTA: Hey, it happens in government work all the time, moron!  (Checks watch) Time for my fifteen minute eggnog break!

FUZZYWIG: I hope it’s brownies.  The munchies are really kicking in after all this hard work I’m doing…

CHIP: This box is for you, Mitzi? 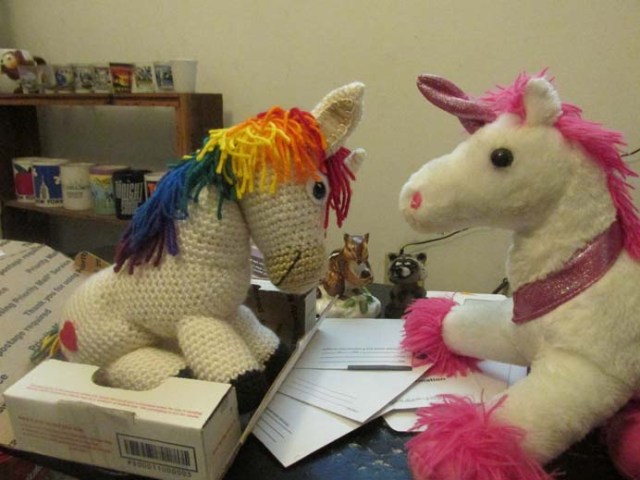 FUZZYWIG: I hope they poked some holes in the box.

CHIP: Wait a minute!?!?  Someone sent you a live unicorn through the mail!?!?

MITZI: You can buy, like, anything online now!  So Mitzi bought herself a new boy toy from StudHub!  It’s time for Mitzi to get horseyback rides!!!

RAINBOW DONKEY: I think that’s my wife, but it’s gonna take my eyes awhile to adjust back to the light and recognize her haggard face.

SPARKLEPONY: Rainbow Donkey!!!  I send you down to the post office to get me some Mr. Ed stamps, and instead you mailed yourself to some hussy!!!  What do you have to say for yourself?

MITZI: We can, like, totally have a Mirage a Trois! 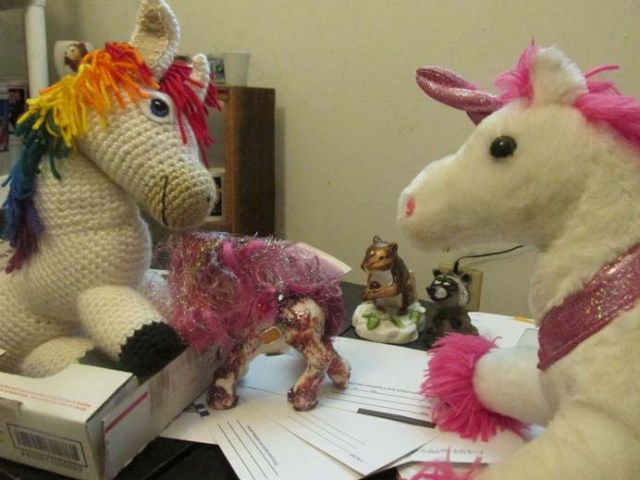 SPARKLEPONY: (Headbutting her husband in a box back towards home) You’re gonna be sleeping in the pigsty for months after this little stunt, mister!

RD: Sorry dear.  You’ll have to call customer service for a full refund.

MITZI: Like, you can’t steal my mail!  That’s totally a crime!  You’ll be prostituted to the fullest extend of the law!!!

CHIP: This is absolutely insane.

MITZI: Well, poopsies!  I guess I’ll just, like, totally take all my fan mail and have someone read it to me! 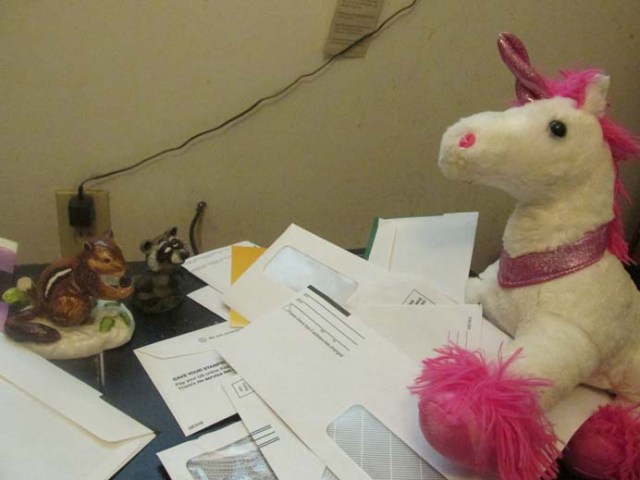 CHIP: Wait a minute!  All of those letters are for you!?!?

MITZI: Totally!!!  Mitzi, like, has fans all over the whole big wide world of sports!  Mitzi gets luv from Canadada, Doucheland, Findland, and even South Dakota!

FUZZYWIG: Any green pieces of paper in those envelopes?

CHIP: Well, I guess that took care of all of the mail.

FUZZYWIG: Yeah, now I can just sit around and get paid for it like every other worker. 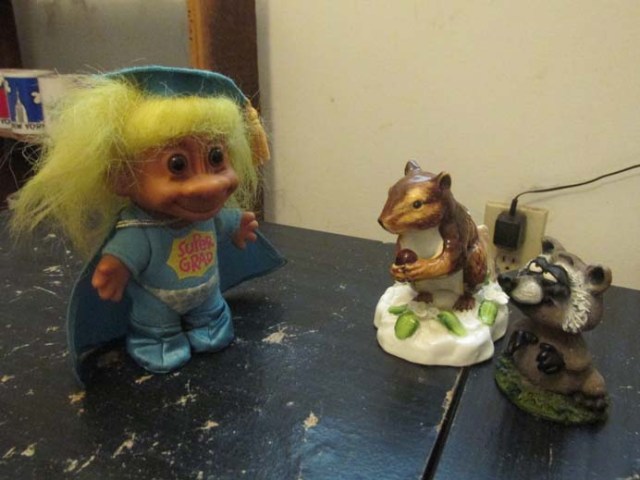 TROLL: Hey, what happened to all of the mail?

TROLL: Dude, I never get any mail!  But I need to sort it before the boss finds out…

CHIP: Uhhhhh, I think you got caught up in a corporate reorganization… 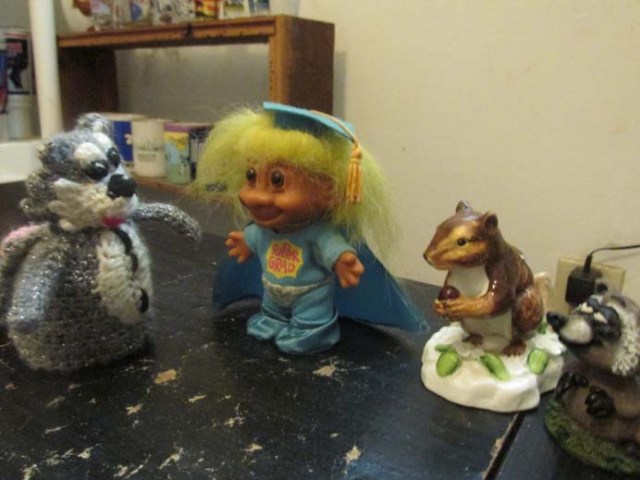 EVIL SQUIRREL: Go on, Troll.  Finish the threat you were making while I fill out your termination papers.

TROLL: Sir, I didn’t mean….. well, I was just reporting to the mailroom to perform my duties like I usually do at this time, and…

ES: And you didn’t know I replaced you with Fuzzywig.  Because the last time you worked the mailroom, you forgot to wash your hands after cleaning out all the toilets and the entire fucking Shelf Critter staff got the possum trots because of your germs on their mail!!!!

CHIP: Is that why I had to get that Pepto Bismol IV last week?

ES: Get out of here!!!  Your job duties have been reduced to janitorial services and bootlicking until further notice! 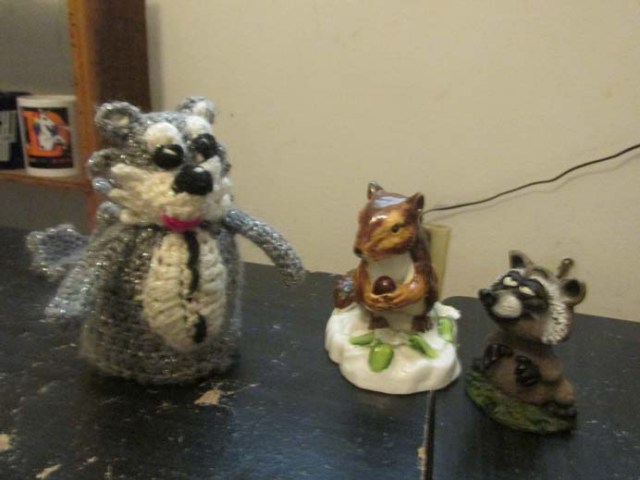 ES: Well, now that the incompetence has been taken care of around here… I’ll just pick up my mail and go back to the offi…

CHIP: There’s no mail left to be sorted.  Nothing came for you today, sir.

ES: What!?!?  Where are all the letters from my adoring fans of SCT!?!?  Are they still in Bangkok with the luggage from my last flight? 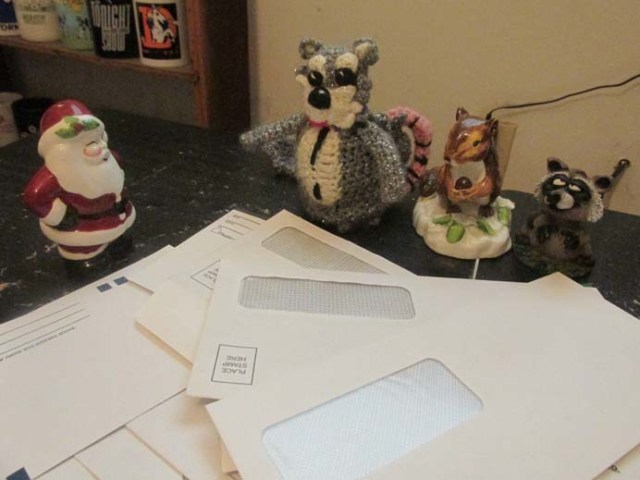 ES: Yes, here we go!  These fan letters are all addressed to me!

SANTA: Bullshit!  This is all the hate mail that had to be screened for language, threats of bodily harm and makeshift bombs!

FUZZYWIG: Awwww, our public loves us! 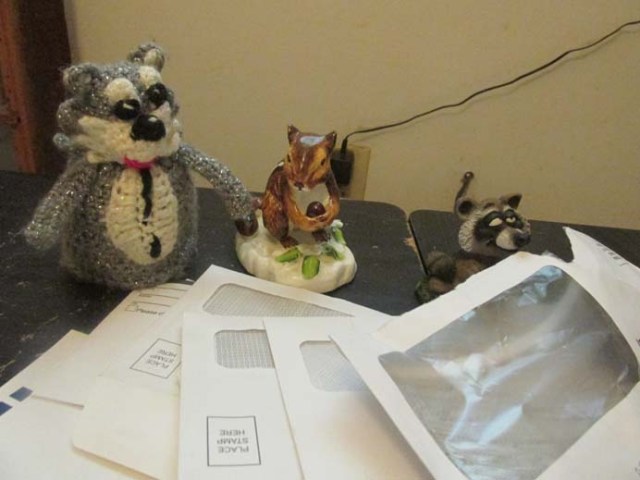 ES: Hate mail!?!?  Why would people send me hate mail?

CHIP: I would guess some people think your Shelf Critter Theatre episodes are too offensive and fucked up, sir.  Kinda like I do…

FUZZYWIG: Uh oh!  The Professional Union of Special Snowflakes Yo is calling for a boycott by your sponsors, chief.  I’ll still get paid, right?

Bored former 30-something who has nothing better to do with his life than draw cartoon squirrels.
View all posts by evilsquirrel13 →
This entry was posted in Shelf Critter Theatre and tagged chip, critter, fucked up, funny, fuzzywig, humor, mail, mitzi, raccoon, shelf, squirrel, theatre, unicorn. Bookmark the permalink.