I will NOT strut, pout, or put it out!

It’s time for The Nest to clean your ears out with another doctor recommended auditory aid to help you start this Monday.  This is the day we dig through the musical records and pull up the chart for another old song that got put on life support in that giant waiting room we like to call the Dusty Vinyl Archive!  Dr. DJ Scratchy’s got another FDA approved music prescription that may cause the side effects of dancing and feeling good, while the Sponkies are busy candystriping by cleaning bedpans.  Ick.  This earworm should only be used as directed…

With all of the female pop idols who dominated the 80’s…. Madonna, Cyndi Lauper, Tina Turner, Boy George… you might not immediately recall one of the decade’s most successful, and certainly its most sassy.  That would be one Sheena Shirley Orr, aka Sheena Easton.  The Scottish born singer hit the big time running in her native UK when an appearance on a 1979-style music themed reality program (or programme, since we are talking about Britain) led to a recording contract and pop chart fame.  By 1981, she had already earned the honor of singing the Bond theme for the movie For Your Eyes Only..

Hey! A chance for me to work in one of my old drawings!

She quickly crossed over the ocean to have a successful career in the US as well, where her songs “Morning Train (Nine To Five” and “Strut” are still well loved and sometimes played.  And of course, she had that flirtation with The Purple One (No, not Barney) which led to one of the few good songs Prince ever did, “U Got The Look.”

They may have even squared off in the World Series of Love.

Sheena’s career post-Prince seems to have been lost to the ages… but she sure as hell wasn’t done charming us with her pipes.  In 1988, she released the album The Lover In Me, which spawned a #2 hit in the title track…. which is my absolute favorite Sheena song, and which… you guessed it, you never hear anymore.

So sad… another victim of music’s war against the awesome songs of the late 80’s.  Just because it makes you want to move doesn’t mean it’s disco, people… 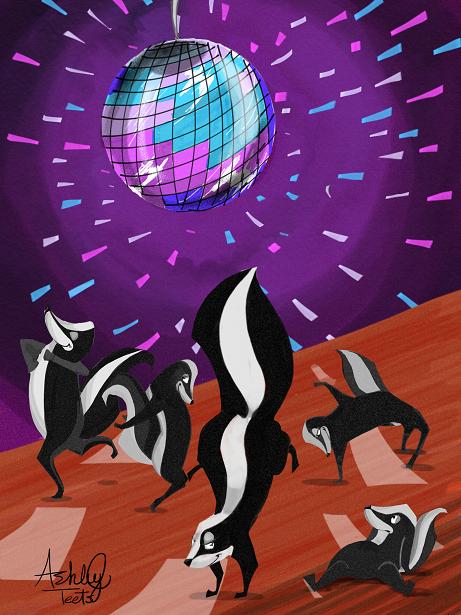 Skunks love disco, and so does The Nest!

Bored former 30-something who has nothing better to do with his life than draw cartoon squirrels.
View all posts by evilsquirrel13 →
This entry was posted in Dusty Vinyl Archive and tagged 1988, archive, dusty, forgotten, music, prince, sheena easton, the lover in me, vinyl. Bookmark the permalink.

19 Responses to Queen Of Sheena