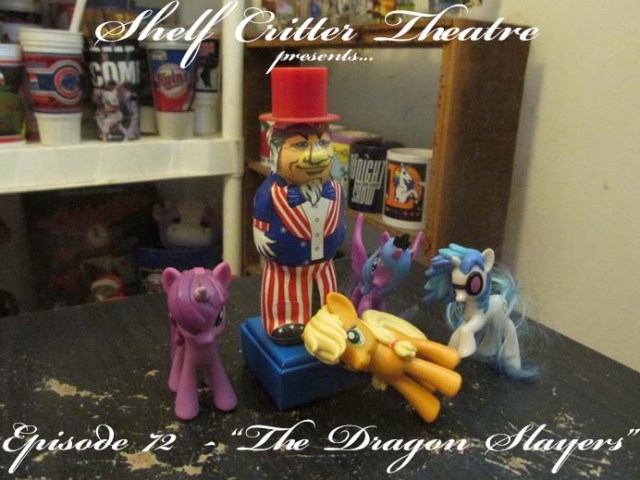 This week’s story takes place in days of yore, whatever the hell that means… in the legendary land of Shelfalot and the court of King Sam…

UNCLE SAM: Ahhh, it’s good to be the king!  Surrounded by my beautiful harem…

SAM: And how do you know that?

SCRATCHY: Dude, you have a fucking queen!

TWILIGHT: Well, he DID have a queen until he locked her away in the Tower of Ugly Hos.

The king’s “enjoyment” of his mares is short-lived… 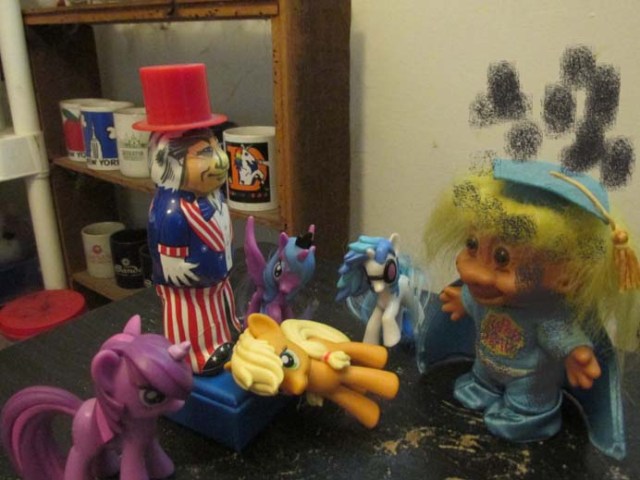 TROLL: Um, Your Majesty!  I have some bad news to report!

SAM: Nonsense!  Bad news is Fake News!  And Fake News gets you scrubbing the horses’ bedpans!

TROLL: Right sir.  But that doesn’t change the fact that the kingdom was just attacked by a dragon!

TROLL: Very positive, sir.  The entire southern perimeter is in flames, and look what it did to the royal ham for the Feast of St. Ricky!

HAMMY: Anyone got some Noxzema?

SAM: This is an outrage!  Take that pork cinder out to the kennel and feed it to the dogs!

TROLL: I can’t do that, sir.  Animal cruelty laws!

SAM: Whatever, give it to the peasants working in the sweatshops then!  Just get that crispy critter out of my sight and fetch the royal wizard at once!!!

LUNA: The royal wizard is more than capable of fetching himself!

SAM: There’s plenty of room in the Tower of Ugly Hos for four more broads if you don’t all get lost!

SCRATCHY: Come on, girls.  Let’s go to my room and play some hip hop songs on my lute… 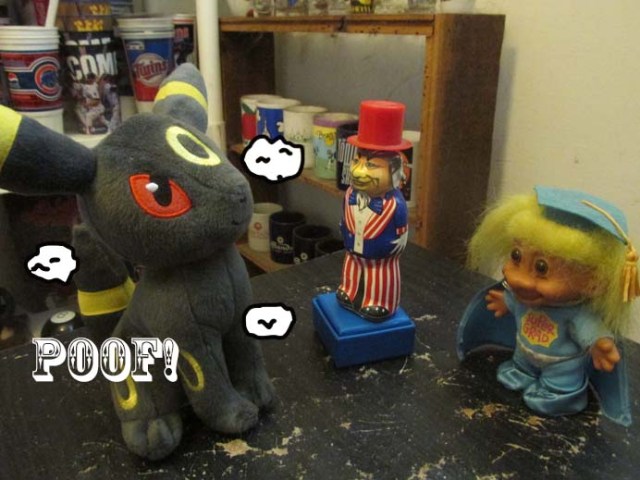 SHADOW: (Appearing in his normal way) I sense that the king has summoned his grand wizard!

SAM: Don’t you ever use that term again in my court!  The media has this castle bugged you know!

SHADOW: I have no time nor patience for your public relations issues, sire.  State your business so I can return to making straw out of gold.

SAM: An evil dragon is threatening to turn my entire kingdom into ash!  You need to use your powers to do something about this!

SHADOW: A dragon, you say?  And the common people laugh about my alchemy experiments.  I may be able to craft a concoction that will solve your issue with mythical creatures… but it will take time for me to create since I’m fresh out of Troll balls….

SHADOW: And I have no idea where to find more…. but I do have a suggestion for our king that may keep the beast at bay while I expertly work my magic.  Send the brave Knights of the Cool Table out to slay the dragon since they’re currently just sitting on their armored arses living the good life.  Farewell, sire…

The magician Shadow disappears with the help of smoke and mirrors…

SAM: You heard the wizard, you mangy haired dope!  Go and summon the Knights of the Cool Table to my throne!  Oh, and fetch my royal jester to keep me in a jolly mood while the kingdom burns to the ground!

HUNG LO: Sire, did you know that man who go through airport turnstile sideways going to Bangkok?

SAM: (Rolling around in his throne laughing) Hoo boy, that one slays me every time!  Tell me another one, fat boy!

Troll sneaks out from the assault of lame jokes to do his duty in contacting…..

The Knights of the Cool Table! 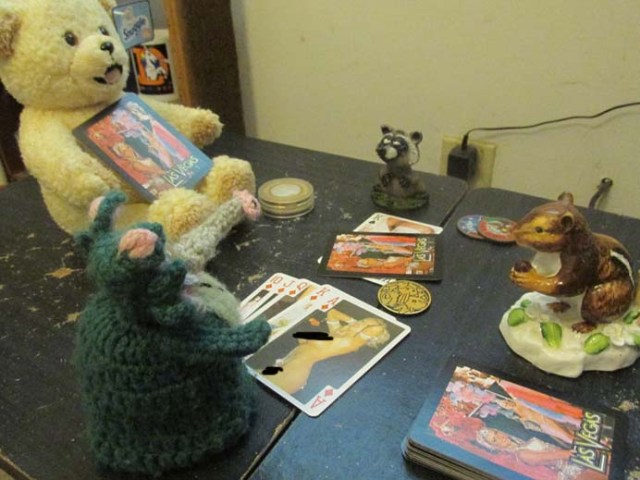 FUZZYWIG: I’ve got a drug house…

CHIP: I refuse to play with these sticky cards, so I’m out.  Buster?

BUSTER: Today’s my lucky day!  I drew a royal flush!

SNUGGLE: A pair of boobs!  You can’t top that!  (Sweeps the chips his way) Now give me that pot!

TROLL: Gentlemen, gentlemen!  I hope I’m not interrupting anything important!

BUSTER: Not at all, sir!  I’m just losing my armored trousers in this game of chance!

TROLL: The king wishes to see his knights at once to vanquish the dragon that’s been attacking the kingdom!

CHIP: The king wants us to fight a dragon!?!?  That’s out of the question!

FUZZYWIG: The only dragon I feel like facing is the one I bought at Mecca that diffuses incense.

SNUGGLE: Dude!  I’m not facing some big-ass dragon!  What does the king think we are, valiant knights or something? 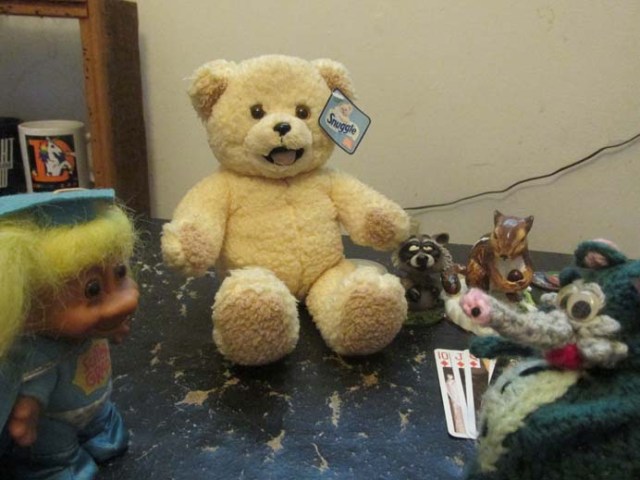 BUSTER: Sounds like a blast!  Tell the king his loyal knights will be there in a jiffy!

SNUGGLE: I’d strangle him, but he’d just show up again next week….

HUNG LO: A priest, a rabbi, and a minister walk into a bar to screw in a light bulb, and…

SAM: Ah, my foolish…. er, brave knights have come!  You are excused jester, and have my lackey bring me a fresh change in underwear!  Your jokes are just too funny!

SAM: Hey, while you’re down there, could you find out why we keep having dogs turn up missing before dinner each night?

SNUGGLE: Dude!  We object to going on this suicide mission!

SAM: You’ll do as your asked by your king, or I’ll throw you in the moat to be devoured by the man eating otters!

CHIP: Your majesty, defeating a dragon is impossible for mere mortals!

SAM: Nonsense!  Think of this as the ultimate challenge of gallantry!  Your names and knightly deeds will live on in infamy!  Many centuries from now, idiots will be dressing up as you at Renaissance festivals!

FUZZYWIG: Dude, as long as MARIHUANA is verboten in this kingdom, it’ll never be the Enlightenment.

SAM: How about I offer up a little incentive for you yellow bellied tin cans… 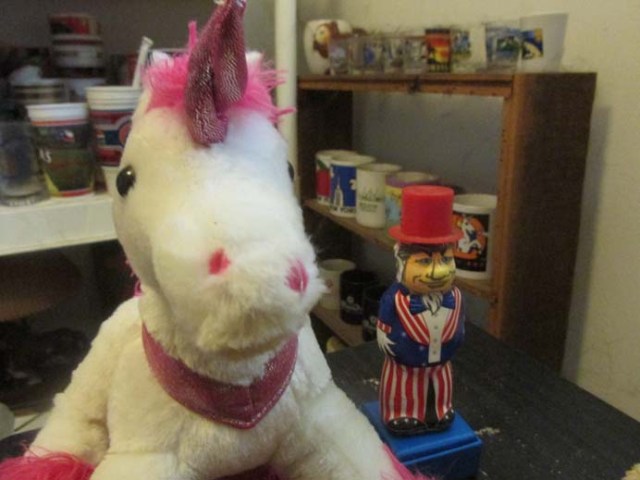 SAM: Whichever one of you slays that dragon will get the Maiden Mitzi’s hoof in marriage!

CHIP: Excuse me, but aren’t maidens supposed to be virgins?

BUSTER: We’re on it, your majesty! 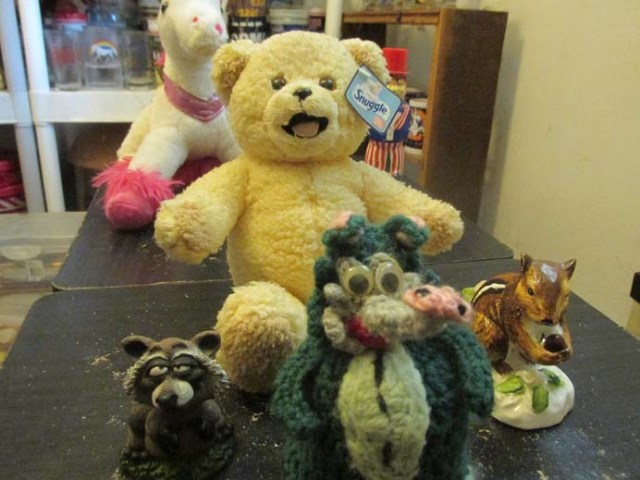 MITZI: Wait!  Can’t, like, Mitzi get goodbye smoochies from her knights in white satin?

SAM: Your king is available for smoochies, my dear.

MITZI: Oh!  Are you gonna totally lock Mitzi up in the Tower of Skanky Hos like the last lady that kissed you?

The Knights of the Cool Table set out in search of the dragon’s lair….

CHIP: So where do we find this ferocious dragon anyway?

SNUGGLE: The only thing your nose can sniff out is a stash of grass!  You wouldn’t know a dragon if you bumped right into it… 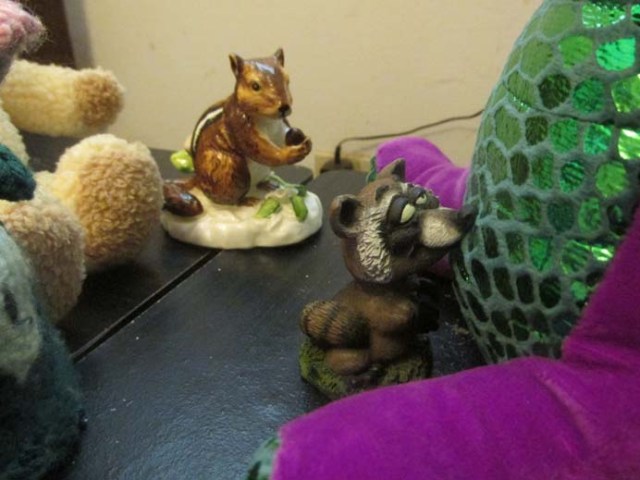 FUZZYWIG: You just had to say that, didn’t you?

SNUGGLE: He doesn’t look all that scary!  I’ll bet we can take him!  (Pushing Buster forward) Go get ‘im tiger!!!

BUSTER: Oh my.  He’s quite a specimen!  What should I do now?

CHIP: Stab him in his soft underbelly with your lance, Buster!!!

BUSTER: Take that!  And that!  Perish, you foul beast!

PASS: Dratted gnats in this kingdom!  Such a pesky lot!  Time for a little high temperature extermination… 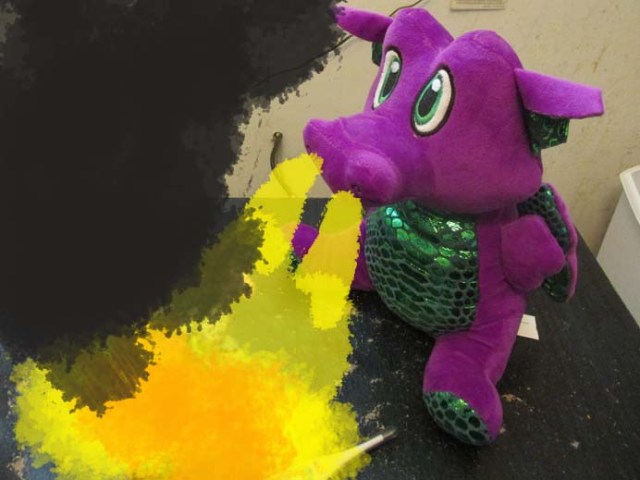 FUZZYWIG: Well, may as well not waste this opportunity…

FUZZYWIG: Why not?  I like my weed to be certified organic.

CHIP: This fucked up scene has gone too far now.

PASS: Please let me know once you’re done saying your goodbyes to your friend, because I really need to roast you other vermin as soon as possible.  I have an appointment as a Halloween decoration in a couple hours.

CHIP: Ummmm, could we please run away now?

SNUGGLE: Yeah, I’m too important to die!  There’s a whole bunch of little bastards running around that depend on my child support…

PASS: I’m sorry, knights.  But I must do right by the Official Dragon’s Code of Conduct and thoroughly exterminate any brave warriors sent to destroy me.  (Prepares a huge flame in his esophagus) Farewell then… 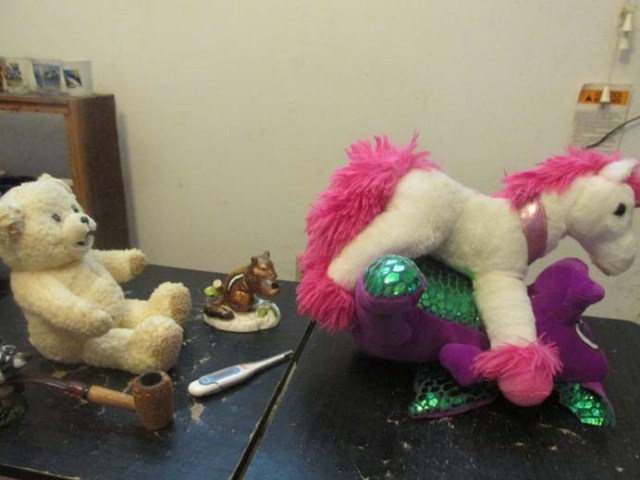 PASS: What is the meaning of this ambush?  Get off of me at once, you oversized rocking horse!

MITZI: Mitzi isn’t going anywhere until she totally teaches you a lesson about being a good boy!

PASS: I’ll incinerate you yet, you interloper!

Before the dragon can emit his deadly fire, though, Mitzi meets his lips and quenches the flames…

CHIP: Well, that was a pretty hot kiss.

FUZZYWIG: Good thing this isn’t the non-smoking part of the kingdom.

PASS: (Profusely smoking from his nostrils) How did you….?

MITZI: They don’t call Mitzi, like, Hot Lips for nothing!

MITZI: Mitzi, like, totally has that effect on her partners!

SNUGGLE: Dude!  Mitzi fucked up that dragon so bad, he changed into someone else!

FUZZYWIG: It looks like our kingdom threatening dragon is none other than the court’s evil wizard!

Mitzi grabs a fistful of Pokeballs to silence the outed traitor.

CHIP: You were the dragon the whole time!  You were using your magical powers to try and take over the kingdom!

SHADOW: I am the superior being here!!!  I deserve to be ruling this land!  I…..

SNUGGLE: Superior being?  Dude, you’re getting your nuts handed to you by a GIRL!!!

FUZZYWIG: Well, that was only slightly sexist… 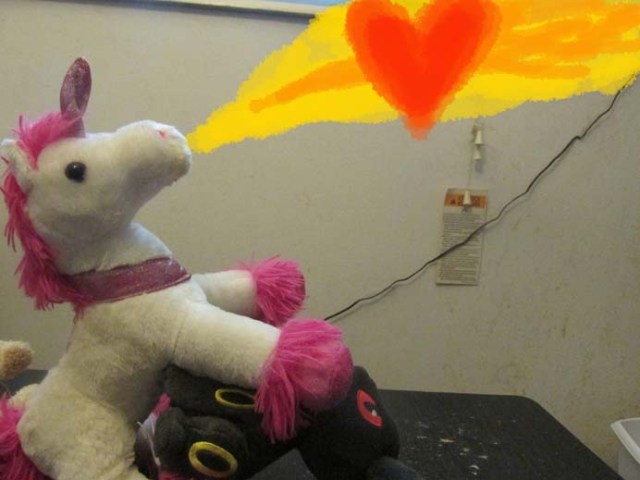 SNUGGLE: The climax scene really got to me!

CHIP: Time to take this bastard in…

SAM: Great work everyone!  The dragon will no longer terrorize Shelfalot and I should get some major points on my approval rating!

SHADOW: I will not let you get away with this, false ruler!

SAM: You’ll be locked up in the dungeon until archaeologists find you sometime in the 20th century!

SHADOW: And once I get my magical powers up and running again…

SAM: Not a chance!  Now that we know your weakness….. Maiden Mitzi!  He’s all yours! 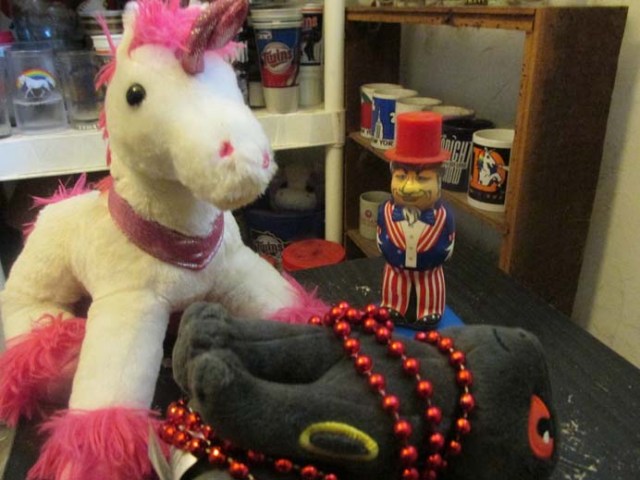 MITZI: Yaysies!!!  Mitzi will like, totally get her doma matrix outfit and keep you in line down in the torture room!

SNUGGLE: So, what about our reward?

SAM: Mitzi got her reward.  She slew the “dragon,” after all.

CHIP: But we should get something for going on such a dangerous assignment!

FUZZYWIG: Yeah, in memory of Sir Buster and shit, who gave his life so we could all get laid.

SAM: Hmmmmmmm…. I guess I can offer up the biggest reward of all.  The princess.

FUZZYWIG: Isn’t she in another castle?

SAM: I can only allow one of you to have her hand, though.  So you three will have to duel for the right to be her prince.

PRINCESS: (From behind, waving a hanky) Yoohoo!

SNUGGLE: Dude!  I’ll tear these two rejects from limb to armored limb!  Just wait and see!  That bitch is totally mine!

Chip and Fuzzywig make a dash for the exit….

SNUGGLE: See, even my fellow knights know I’m the baddest ass around here!  Time to go pork me a little princess patootie!

PRINCESS SCRATELLA: (In a crappy falsetto) Oh, Sir Snuggie!  I do so look forward to many hot nights in the royal bedchamber!

SAM: Now now, Sir Snuggie.  This is a modern kingdom, and if the prince wants to be a princess, then who am I to stand in the way of his…. er, her dreams.  Farewell you lovebirds!

BIG SCRAT: This is going to be so much fun!  Let’s go back behind the armory and practice jousting with our “lances!”

And they all lived happily ever after…..

SNUGGLE: NOOOOO!!!  I’m not happily ever after!!!!  Won’t some brave knight…. er, knightess come rescue me from this hideous creature!?!?!?!?