Come As You Aren’t

CHIP: How did we get rooked into being the judges for this year’s Shelf costume contest?

FUZZYWIG: I don’t know, man.  But at least it means I don’t have to dig through the closet for my Tommy Chong outfit I wore for my fourth grade Halloween party.

CHIP: Is that when you got suspended for bring those special brownies to school?

FUZZYWIG: The principal only kicked me out because I wouldn’t keep supplying him.

CHIP: Well, I’m glad I don’t have to dress up either.  I already feel like my normal critter persona is a disguise on this twisted Shelf! 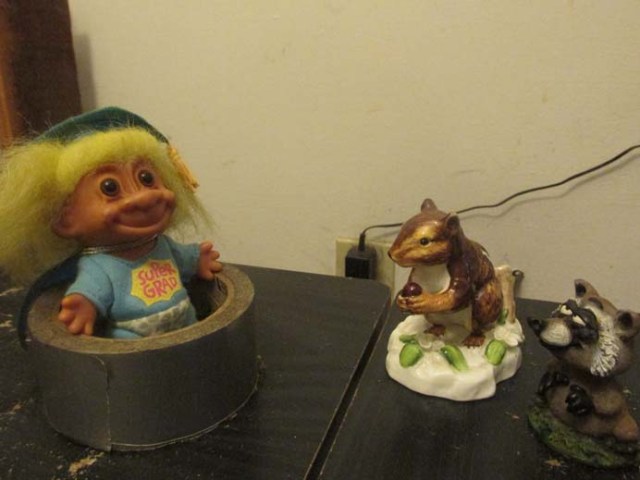 CHIP: Ummmmm, is that supposed to be a costume?

TROLL: Hell yeah!  This year, I’m going as a roll of duct tape!

FUZZYWIG: Shouldn’t you be sticking the duct tape to your pajamas you wear all the time?

TROLL: No way!  Every time I try to use duct tape, I get it stuck in my hair, then my mom always rips it out really hard!   And then I have to buy more Chia Pet seeds to replace the divots!  No, I’m just a roll of duct tape!

FUZZYWIG: Maybe next year I’ll just put myself in a giant Ziploc and go as a bag of weed… 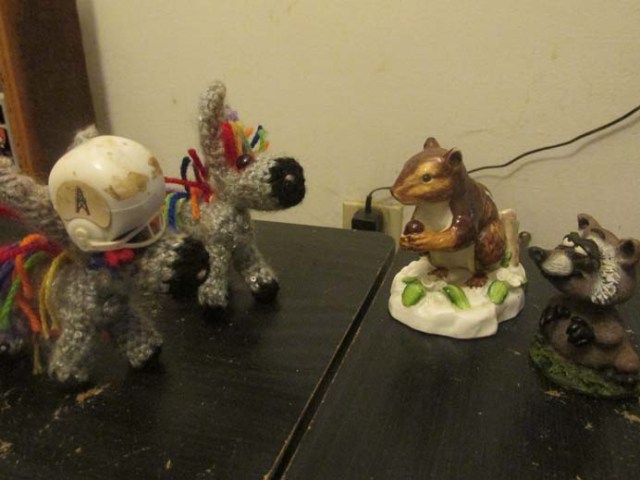 SPONKIE 2: Is this the big costume party?

CHIP: It sure is.  What are you two supposed to be?

FUZZYWIG: Wearing a helmet from a team that hasn’t existed since pot was still illegal in every state.

SPONKIE 2: And I’m a rugby player!

CHIP: Where’s your helmet at then?

CHIP: But aren’t you the girl Sponkie?

SPONKIE 2: Fat Barbie taught me that girls can do ANYTHING!  And besides, I’m biologically immune from the squirrel grip!  Right bro?

FUZZYWIG: Well, if it isn’t the wicked witch and….. ummmm….

CHIP: Well, that’s obvious, but what are you supposed to be dressed up as?

SPARKLEPONY: My lazy husband decided that since he’s the most popular Halloween costume of the decade that he can just go as himself.

CHIP: Well, I think your costume is quite dashing at least, Mrs. Sparklepony.

SPARKLEPONY: I don’t even care.  I only came to this party to chaperone my three kids.

FUZZYWIG: I thought you only had the two Sponkies…

SPARKLEPONY: (Punching Rainbow Donkey in the side) No, I definitely have three.  And if I catch him eying up any of the sluts at this party, my next costume will be a lifelike Lorena Bobbitt!

FUZZYWIG: And you annoying kids would be….?

CHILD 2: We’re dressed as those black and orange wrapped candy people give out to unsuspecting trick or treaters! 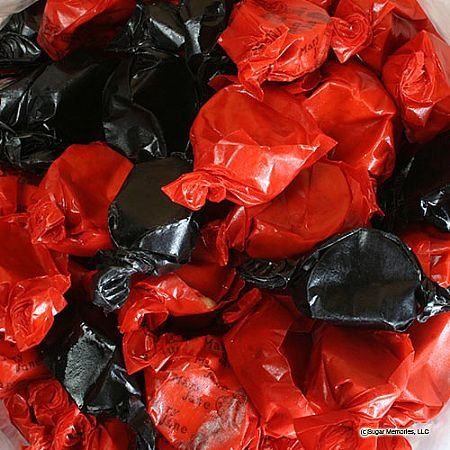 CHIP: Wow, that’s the same kind of candy I give out on Halloween!

CHILD 2: Why are so many of the girls showing off their cooties tonight?

FUZZYWIG: You’ll understand when you grow up kids… now run along before I sic my werewolf on you troublemakers!

CHIP: You don’t have a werewolf, Fuzzy!

FUZZYWIG: How do you know?  There isn’t a full moon.

FUZZYWIG: Buster came as a zombie.  That almost seems like cheating. 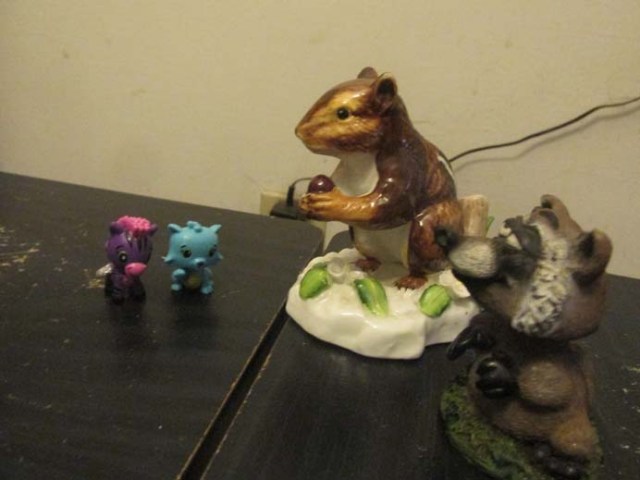 BEARCAT: I hope we’re not late for the party!

CHIP: And what are you little girls supposed to be dressed as?

CHIP: Was that really necessary?

UNCLE SAM: Excellent work kids!  Now I won’t have to deport that zombie!

CHIP: And sir, where’s your costume for the contest?

SAM: My costume?  Son, I’m a celebrity billionaire who has been masquerading as a world leader for three years now.  I win!

FUZZYWIG: Uh huh.  Say, why don’t you go over to the barrel there and try bobbing for cow pies?

CHIP: Rainy as a mermaid?  Isn’t that kind of the definition of irony?

RAINY: I’ve always wanted to be a merskunk!  I think I look absolutely adorable!

FUZZYWIG: Eh, maybe now.  But just wait until that tail dries up from not staying wet.

RAINY: Thanks for reminding me that I can’t ever be a real merskunk because it NEVER RAINS ON THIS SHELF!!!!

RAINY: That pisses me off that I can’t live out my fantasy like everyone else can!  It’s time for me to give this stupid holiday a really nasty trick!!!!

CHIP: Uh oh, this is gonna be worse than that time my house was pelted with rotten eggs….

Rainy stomps off and goes home to turn out her porchlight…

SNUGGLE: I’m being held against my will!!!  I was gonna bang every chick at this party until this lunatic cuffed me to his arm and made me throw on this prison uniform!

CHIP: I’m not saying anything… just going to wish you a pleasant time at the party tonight.

BIG SCRAT: You bet we’ll have a lot of fun!  It’s time for me to find an interrogation room so I can use my nightstick on my prisoner!  And I don’t mean to beat him with!

SNUGGLE: (Being dragged away to a back room) NOOOOOOOOOOOoooooooooo!!!!!!

FUZZYWIG: Fancy meeting you at a pagan celebration.

RICKY: I’m just here to pray for the souls of every critter who is attending this unholy festival.  May Dog have mercy on you.

CHIP: Wow, an even bigger killjoy than myself!  The cow pie bobbing is over there… if there’s room enough in the barrel for both you and Uncle Sam’s oversized heads.

FUZZYWIG: Really?  I thought I put enough chains on that mutt’s collar to keep him in the basement…

FUZZYWIG: Ridiculous.  Utterly ridiculous!  If I had a rolled up newspaper right now, I’d teach you a lesson you’d never forget!

TWILIGHT: Come with us, kittypup!  You’re all ours tonight!

FUZZYWIG: I think it’s time to get him neutered.  With a rusty chainsaw….

CHIP: I have officially seen it all, and I don’t think I’ll ever unsee it all.  You know, the one critter I was sure would be at a Halloween costume party is Mitzi.  I wonder where she is? 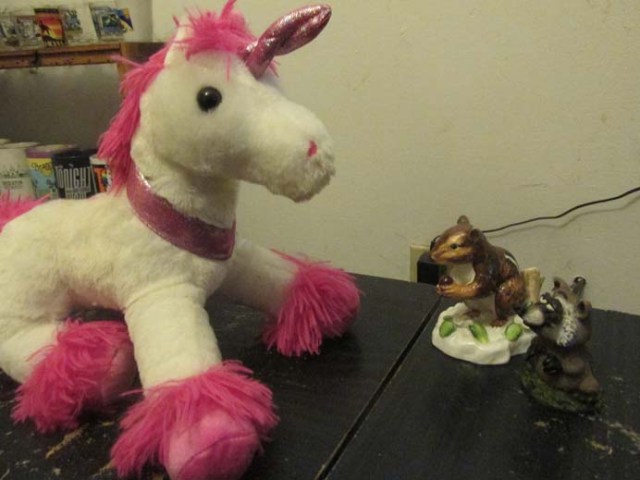 FUZZYWIG: Speak of the devil.

MITZI: This year, Mitzi, like, thought it would be funner to be something that Mitzi, like, totally isn’t!  So Mitzi decided to dress up this year as a VIRGIN!!!!

FUZZYWIG: Well, that’s certainly something nobody would ever expect you to be.

CHIP: OK, but exactly how do you dress up as a virgin?

FUZZYWIG: (Snorts MARIHUANA remnants from his nose) How do you spell “LOL?”

CHIP: OK, this is too fucked up!  Even for Shelf Critter Theatre, this has gone way, WAY over the line!!!

FUZZYWIG: It’s not a line, Chip, it’s a hyphen!

CHIP: Don’t encourage her, Fuzzy!  I don’t even know what to say about this.

MITZI: Like, you totally don’t have to say anything!  Mitzi’s gonna go out on the floor and totally get her party on now!  Like, toodles!!!

FUZZYWIG: It’s moments like this when I actually feel proud to be a Shelf critter.

CHIP: I’m really just about ready to walk off the set.  That gag, if you can call it one, was just crude and completely unnecessary…. 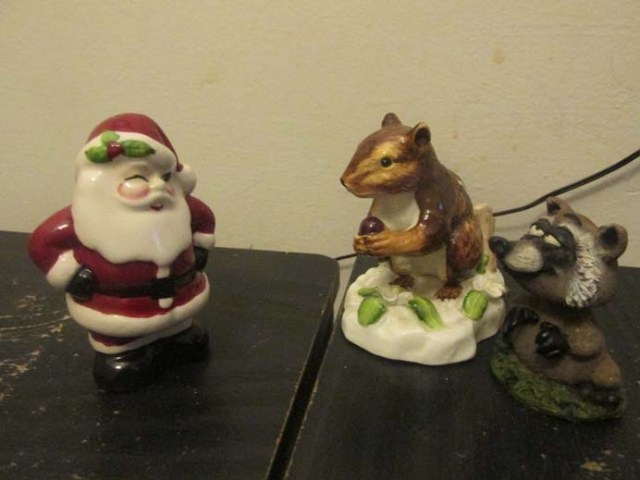 FUZZYWIG: There’s more than three hos at this party, dude!

CHIP: What would bring Santa to a Halloween party?  And where’s your costume?

SANTA: Well, if this Santa suit isn’t good enough for you costume judges, I can always remove it because I still have my elfkini I wear on the beaches of Costa Rica underneath it!

SANTA: Well then.  Normally I don’t publicly appear until the end of the Thanksgiving Day parade, but since the holiday season now starts on November 1st, I figured I’d just show up at the end of the Halloween party this year!

CHIP: This party is finally over!?!?  Hallelujah!  Not a moment too soon!!!

FUZZYWIG: Santa, can I have a new bong under my tree this year?

CHIP: And that’s mercifully the end of this travesty!

CHIP: You couldn’t have won the costume contest!  We haven’t even voted on it yet!

TROLL: Man, fuck the contest!  I mean, this awesome costume scored with the ladies!!!  Check this out!

Bored former 30-something who has nothing better to do with his life than draw cartoon squirrels.
View all posts by evilsquirrel13 →
This entry was posted in Shelf Critter Theatre and tagged chip, contest, costumes, critter, funny, fuzzywig, halloween, humor, mitzi, party, raccoon, shelf, squirrel, theatre, troll, unicorn. Bookmark the permalink.

21 Responses to Come As You Aren’t