SNUGGLE: So anyway, this Girl Scout comes to my door last night asking me if I’d like any cookies…

FUZZYWIG: This anecdote has inappropriateness written all over it…

SNUGGLE: It was the free samples, no doubt!

BUSTER: Oh my, the tail mites sure are bad this time of the year… 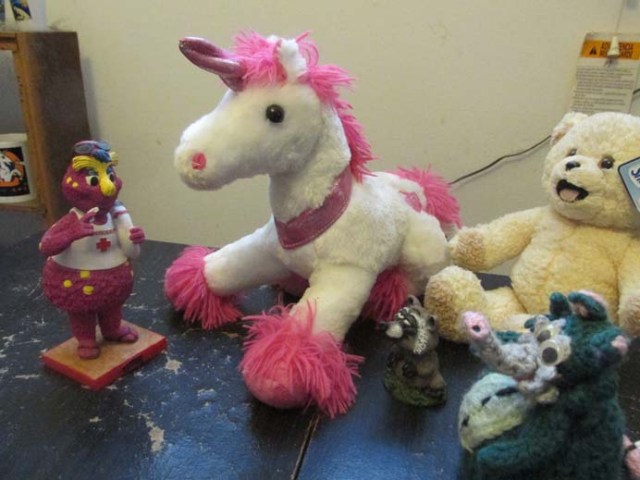 FUZZYWIG: Nothing much.  We’re just reenacting the signing of the Magna Carta here, chief.

SNUGGLE: Hey, butt out of our private conversation, dude!  This talk isn’t meant for virgin ears like yours!

SLIDER: I could care less what you’re discussing.  What I want to know is why you’re all congregated here now?

SLIDER: There’s a possum trots pandemic going on right now, and you’re all gathered together spreading your germs to each other!

SNUGGLE: Mitzi’s germs are totally worth catching, though!

SLIDER: I want to speak to the critter in charge here!

SLIDER: Sir, in light of this possum trots epidemic, I highly recommend you confine all critters to their domiciles!

SAM: I’m gonna look up that word “domicile” when I get back to the Oval Office, and it better not mean what I think it means!

SLIDER: You’re not taking this seriously, are you?  Any one of these critters might be a carrier for the disease and not even know it!  The symptoms start off very subtle.  Usually the first sign of possum trots is coughing…

SLIDER: Followed up by a high fever…

SLIDER: And eventually leading to severe abdominal cramping and discomfort…

BUSTER: Hooboy!  I knew I shouldn’t have eaten that spicy breakfast burrito this morning.

SNUGGLE: What, man?  You wanna catch his nasty ass cooties?  Starve a cold, burn a fever!!!

FUZZYWIG: Eh… it kinda smells like my good stuff.

EVIL SQUIRREL: What’s going on here?  The script didn’t call for Buster to die by fire this week!  He was supposed to have his spleen ripped out through his nose with a coat hanger.

SLIDER: I’m afraid you’ll have no choice but to go off script today, Mr. Squirrel.  This entire stage is infected with PUTRID-69, the possum trots virus!

EVIL SQUIRREL: So what if it is?  We have a decent health care plan on Shelf Critter Theatre.  Hospital quality leeches, discount suppositories, free therapy unicorns and all that shit…

SLIDER: The possum trots is very serious and can NOT be spread beyond this stage!  By the power invested in me by the Shelf Health Board and Bingo Regulation Council, I am hereby putting you all under quarantine until further notice!

FUZZYWIG: Forget that, man.  It’s almost 4:20, and I need to mellow out my germs with a little medicinal MARIHUA….

SLIDER: You’re not going anywhere until this pandemic is under control!!!

SNUGGLE: Dude!  You can’t do this to us!  I know my rights!  Where’s my phone call?  I wanna call the fucking Marines!!!

EVIL: Hey!  How come you don’t have to be in here with us, Virus Nazi?

SLIDER: I’m a professional health official, I don’t get sick.

SAM: And the last special prosecutor I spoke with granted me immunity, so I’ll be heading out of here to veto a few bills.  Adios…. I mean, Dog Bless the Shelf!

MITZI: Mitzi hasn’t been in a cage like this since her go go dancing days!  I totally need my shiny boots!

SLIDER: I think it would be a good idea to fumigate the area to kill any trace remnants of the virus…

The quarantinees all hack and gag on the FDA approved fumigant.

SLIDER: I’m putting you in charge of making sure none of these subjects leave the quarantine area!  If anyone so much as sticks a whisker outside of the barrier…. shoot to kill!  And then drag their body back inside the protected area…

SLIDER: Do you even have a gun?

SLIDER: Sigh, I have more important business to attend to.  Just make sure they stay locked away from the rest of society!

FUZZYWIG: You sure none of this was in the script, boss dude?

EVIL: Why would I write myself to get locked up like this?

MITZI: Mitzi can’t, like, get possum trotses and die!!!  Mitzi’s still a virgin!!!

CHIP: (Muffled) This is Chip Squirrel at the Shelf Critter News Network desk.  Our top story remains the massive outbreak of the PUTRID-69 virus, commonly known as the possum trots.  There are now around fifteen billion cases reported shelfwide, with an estimated six of those confirmed by medical professionals and not just our ambiguous sources.  Let’s see what’s going on out in that big old dangerous world with the reporter who drew the short straw, Sage Skunk.  Sage, how are things where you are? 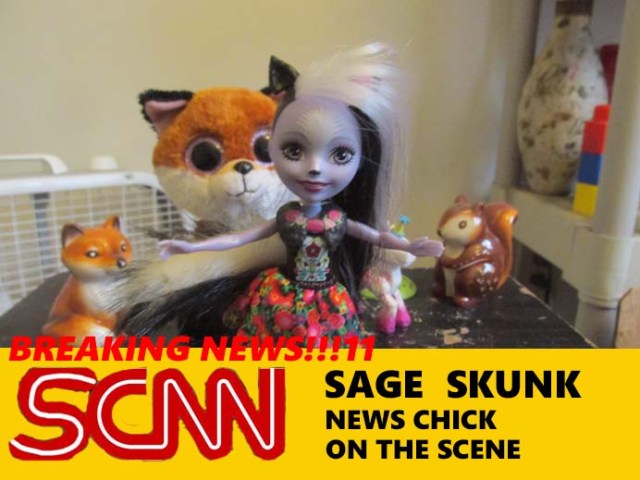 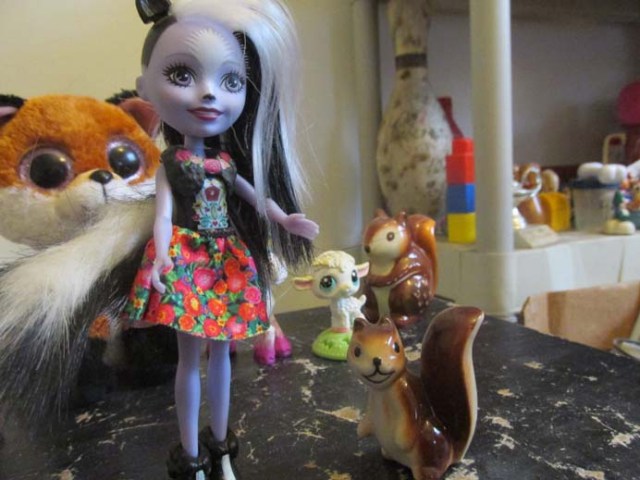 SAGE: How can you sound so ecstatic at a time like this?  Critters are dying!!!!

ZAC: Easy come easy go!  Kick the bucket!  For whom the bell tolls, it tolls for thee!  Don’t fear the Reaper!  More cowbell!  Yep, all gonna die someday!  And I’ve got a really bodacious reason to be extra extra happy today!  Yep, so totally pumped and stoked!  It’s my lucky day!!!

SPARKLEPONY: Let go of that shit paper, you pipsqueak!  I saw it first!!!!

BIG SCRAT: Like hell you did, bitch!  That’s my TP for my bunghole!!!

SAGE: And there you have it, yet another innocent victim succumbs to the possum trots virus!  Back to you, Chip….

CHIP: Well, at least it looks like he went with a smile on his face…

EVIL: (Shutting off the newscast on his dumbphone) This is terrible!  They’ll never let us out of here at this rate!

MITZI: Mitzi, like, totally needs to redo her makeup already!

FUZZYWIG: I sure am getting the munchies.  If only we had Hung Lo in here with us to cook this useless mutt.

SNUGGLE: That’s the last thing we need is that fat ass in this tight spot.  They’ll let us out of here soon enough.  I mean, how long can this last….?

SNUGGLE: So…. maybe I was wrong.

FUZZYWIG: Damn, I didn’t think we’d been quarantined in here this long for it to already be December.  Can I have a pouch of Mary Jane, Santa?  I’ve been a good boy, more or less….

SNUGGLE: Yeah, how about a Hustler or a Penthouse to pass the time?  I’m so desperate, I’ll even take a used copy of Oprah…

MITZI: Can Mitzi, like, totally have a mani/pedi for her poor hoofies?

EVIL: All I want for Christmas is to get the fuck out of this hellhole!

SANTA: Awwwww, how sweet.  Well, none of you are getting shit!!!  I just stopped by to saying we’re cancelling Christmas this year!

SANTA: Bullshit I can’t!  Seems to be the trendy thing to do.  And besides, you want my nasty ass reindeer spreading disease with all of their brown bombs they drop along my yearly trip?  Ain’t happening!  I’ll be snowbirding in Costa Rica all year this time around wearing my elfkini and pouring down a few ice cold Coronas….. errr, some other cerveza.  Hasta!

DAY ONE HUNDRED AND NINETY-THREE:

TROLL: Hey!  What’s going on in there?  What’s all the commotion?

TROLL: What are you doing on your back?  Did you fall?  Are you injured?  Has the possum trots finally liquidated your insides?

MITZI: Lolsies!  Like, no!  Mitzi’s just totally having a good time!

MITZI: And so are, like, all of Mitzi’s guillotined friends!

SNUGGLE: I know why the caged unicorn sings, and it’s because of Uncle Snuggie’s dryer balls!

FUZZYWIG: (Raising his head up from….. um, and wipes his chin) Hey man, I had to satisfy the munchies some way.

EVIL: Honestly, I’d rather have the possum trots than blue balls.

TROLL: Is that even legal?  My probation officer told me it wasn’t, which is why I couldn’t work on the halfway house’s farm.

MITZI: Yaysies!  Can Mitzi, like, get some more penicillin please?

SLIDER: Good news, everyone.  The quarantine is over, and you are all free to go about your business again!

EVIL: Look at these unsanitary conditions you left us in for all that time!  And you call yourself a health inspector.

SLIDER: My job is to protect the public at large… not a few virus-ridden rejects like you.

FUZZYWIG: So I guess the possum trots virus has been contained now.

SLIDER: But the news outlets got tired of reporting about the epidemic, so the public lost interest.

TROLL: (Sweeping away years worth of…. Tootsie Rolls) Yeah, all the news is reporting about now is how Justin Beaver and Kim Lardassian are apparently an item.  Even the Prez is tweeting about it.

FUZZYWIG: So in the end, we defeated the disease with apathy.  I just love this country… except for its drug laws.

SNUGGLE: Hey, at least we finally got our freedom back!  Man, this is just like the day I got early-released from the penitentiary for semi-good behavior!

MITZI: Mitzi can, like, totally work a pole that isn’t attached to a jail cell now!

FUZZYWIG: I hope my home stash hasn’t expired after this long.  I hate smoking the meh stuff.

EVIL: At least this unfortunate episode is over now…. 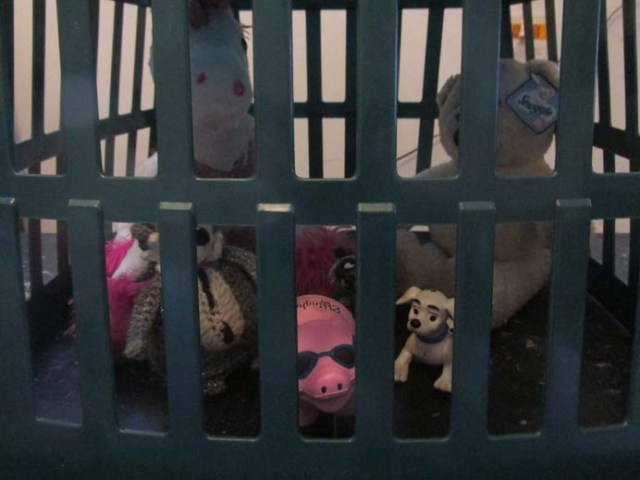 EVIL: Now I know why I don’t like putting together Shelf Critter Theatre plays anymore…

MITZI: Mitzi’s mascara is gonna totally run if she keeps crying like this!

SNUGGLE: At least this time we’ll be able to cure those munchies with some fucking bacon!!!!

SNUGGLE: (Pulling out his switchblade) No, just you piggy.  Just you!!!

17 Responses to Hot For Trots