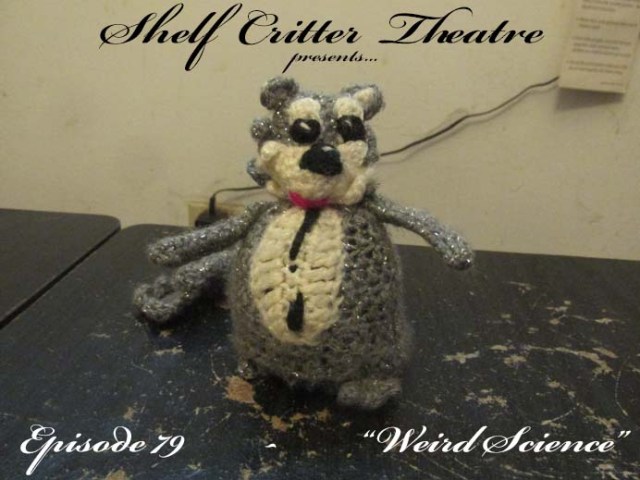 EVIL SQUIRREL: Hello all of my wonderful readers out there!  As you may know, I took some time off this week because I got…. a little……um…. more mature!  Yes, definitely more mature!  And I spent some of my free time playing around on educational sites like Wikipedia.  I started with the Big Bang, and kinda went from there learning all kinds of interesting things about the science of our world and universe!  I thought I’d share some of the more interesting discoveries I made over the past few days to make this an educational episode of Shelf Critter Theatre, rather than the usual fucked up mess you’re used to seeing….

SHADOW: Greetings, insignificant critter!  My advanced telepathy tells me that you wish to share some utterly basic information your puny squirrel brain somehow absorbed while attached to a computer.

ES: Look here, Long Ears!  I don’t take this kind of belittlement from ANY of my critters!  Don’t think for one minute I won’t chuck your narcissistic ass in the Goodwill dumpster the next time I drive by…

SHADOW: Oh, please.  Don’t insult my vast intelligence.  You paid $14 for me at Mecca, and you have a secret Umbreon fetish.  I won’t be going anywhere…

ES reaches up to grab Shadow by the neck….. but stops.  Because, you know, he has a no longer secret Umbreon fetish.

ES: You’re lucky I’m still in a jolly mood from eating all that chocolate cake!

SHADOW: Since I’m an overqualified expert in the field of science, how about I help you along with this ridiculous little demonstration.  Enlighten me with your newfound knowledge, grasshopper.

ES: Alright, maybe you can be some help after all.  My first interesting fact concerns our ninth planet, Pluto.

SHADOW: You mean the dwarf planet Pluto.  So uneducated…. 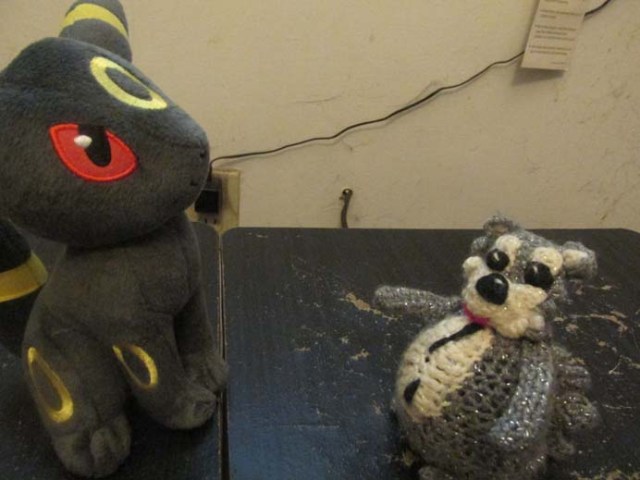 ES: Now you look here, you radioactive turd!  I might overlook your condescending behavior towards me since I’m so attached to you… but if you refuse to recognize Pluto’s existence as a bonafide planet in our solar system, then I’ll personally put you on a Goodwill shelf next to the peeled off Rubik’s Cubes and used rectal thermometers!

SHADOW: Very well.  I’ll entertain your ignorance this one time….

ES: Now, as I was about to say before I was very rudely interrupted… the PLANET Pluto and its largest moon Charon both revolve around a fixed point between them! 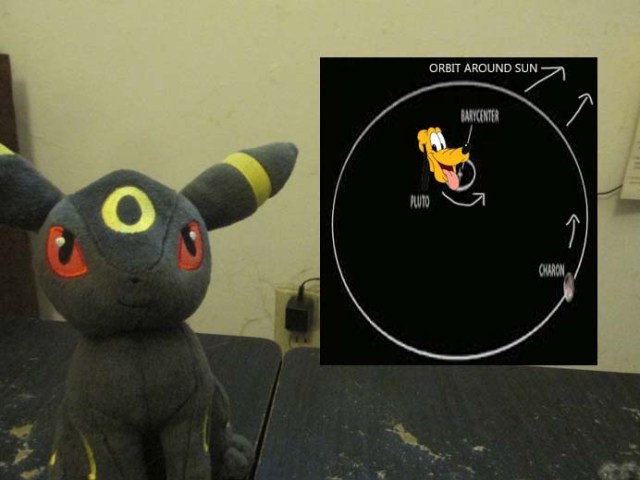 SHADOW: Both bodies revolve around their center of mass, or the barycenter, which itself is what revolves around the sun.

ES: I thought that was so neat that Pluto does little circles every few days on its long journey around the sun.

SHADOW: Barycentric rotation, such as Pluto and Charon engage in, is very much like what you see when an Olympic hammer thrower spins around before launching.

ES: I was actually kinda thinking of Troll and his bottle of hooch… 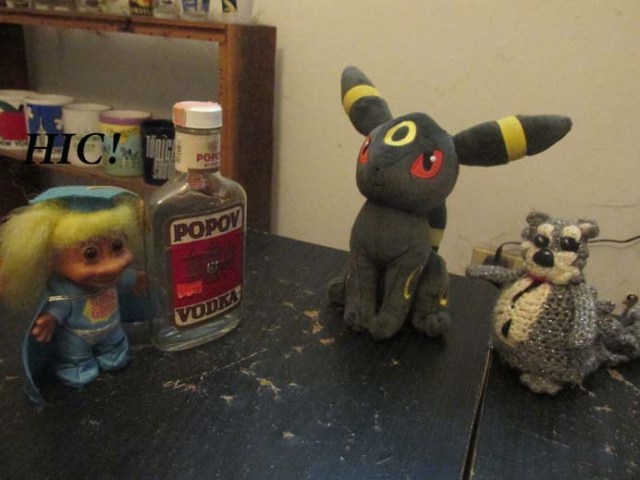 ES: Watch out for the edge of the stage, dumbass!

SHADOW: Pity.  Another critter ejected from the solar system by outside forces.

SHADOW: That was almost…… fun.  What input do you have for us next, small squirrel?

ES: Well, in a little over four billion years, our very own Milky Way galaxy is going to collide with Andromeda!

SHADOW: Of course.  In an ever expanding universe, most objects are traveling away from each other at unimaginable speeds.  However, our neighbor Andromeda is actually getting closer and closer to us by hundreds of miles a second! 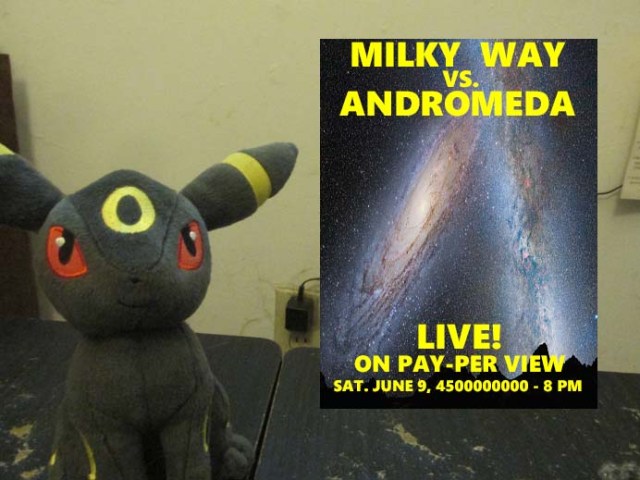 SHADOW: These two galaxies are playing a cosmic game of chicken that will end in a violent collision far in the future that will combine the two systems into one supergalaxy!

ES: Yeah, it would suck to be around when that catastrophe happens.  Poor Keith Richards.

SHADOW: Nonsense!  An observer on earth would never even know it was happening.  Despite each galaxy containing billions of stars, they are so far apart from each other that the chances of any two physically colliding with another is too remote to even calculate!

ES: I refuse to believe two galaxies can have a peaceful collision like that.

SHADOW: Let me prove it to you… 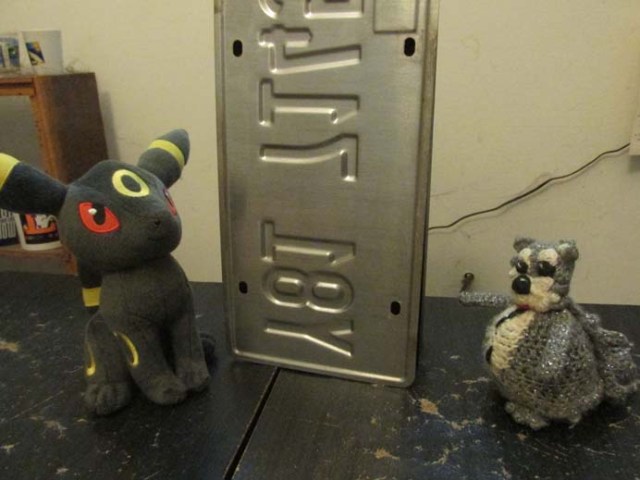 SHADOW: In my spare time, I’ve built this time machine out of some spare DeLorean parts I found in a junkyard.  All I need to do is send an observer four billion years into the future to witness and survive the event!

Shadow opens the door to his time machine, conveniently blocking ES out of the next scene… 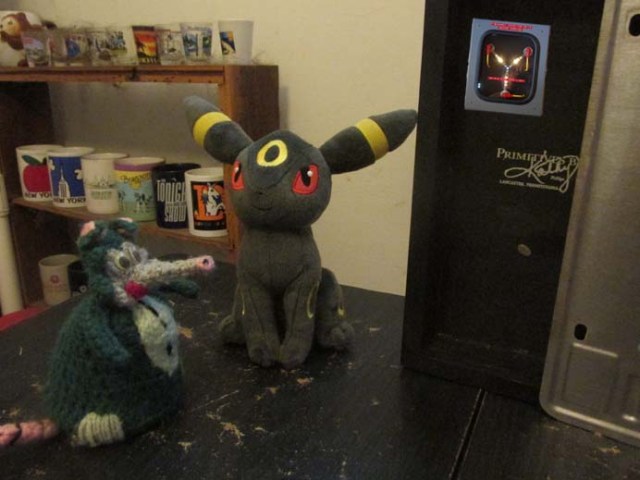 BUSTER: Wow!  A photo booth!  I must go inside and take a few selfies to send to my mother!

SHADOW: Please enter.  And while you’re in there, please tell us what the future’s like in four billion years.

BUSTER: Four billion years into the future?  What do you mean by… 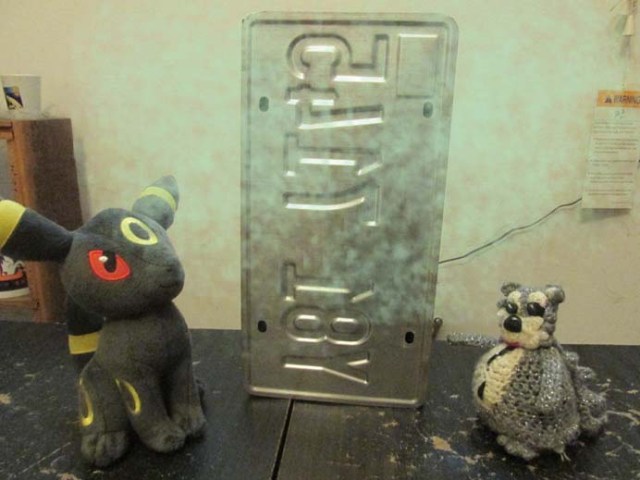 ES: Did you just send Buster into the future to witness the galaxy collision?

SHADOW: Who better to prove my theory that no harm will come to this planet by the cataclysm!

ES: The same Buster who would get hit by a school bus on a 2 AM walk?

SHADOW: Ah, I believe our time traveler has returned!  Let’s see what grand tales he has to tell us about this magnificent astronomical event!

Shadow opens the door, and….

SHADOW: Well, this is a tad inconvenient.

BUSTER: (Barely alive) Sorry I failed you, sir.  But your time machine actually took me to the distant past instead of the future.

SHADOW: That’s impossible!  My inventions never fail like this!  So what happened?

Back in the present time…

ES: Now that all the prehistoric possum guts have been cleaned off the set, I can continue with my next amazing discovery… which is that all of our seasons on earth have different lengths!

SHADOW: That is correct.  If you thought summer seemed to last way too long, there’s a very good reason for that.   The earth has an elliptical orbit, and is closest to the sun during winter in the Northern Hemisphere.  Because objects in orbit have a higher velocity during perihelion, this causes both autumn and winter to be slightly truncated, while spring and summer get expanded.  See for yourself in this handy chart…

SHADOW: Just being in this creature’s aura has stripped eighty points off of my lofty IQ.

ES: And like you wouldn’t wear the same thing during the winter, Mitz.

MITZI: Oh, Mitzi, like, totally bundles up during the winter and wears her furry bikini with the totally matching boots!

SHADOW: This whole episode is giving me a very uncomfortable feeling inside of my Pokeballs…. 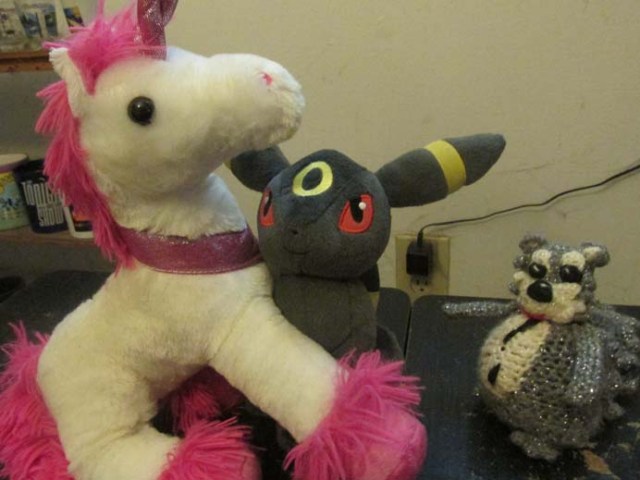 MITZI: Oh, Mitzi can totally help you with your Pokeyballs!  Like, let’s see how fast I can totally make them orbit around in my mouf!

ES: I’m sorry, I’m so insignificant that I mustn’t have heard you.

ES: Hey Mitzi.  Me and the professor are busy here.  I wrote Snuggle out of this episode, so why don’t you head to the laundromat and fluff up his dryer balls for him?

MITZI: Like, what a totally good idea!!!  Maybe Mitzi can get her sling ‘kini tongue washed as well!  Like, buh bye!!!!

SHADOW: That was close.  Sex has no place in scientific discussion!

ES: At least we know there’ll never be another one of you.  Now, everyone knows about the Age of Aquarius from the Fifth Dimension song.

SHADOW: What kind of musical rubbish are you talking about?

ES: Oh, have I stumped the brainiac with a little pop music trivia? 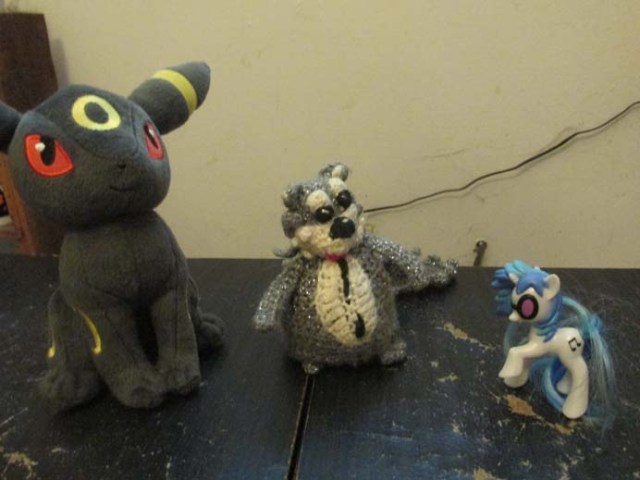 SCRATCHY: Dude, I don’t blame him for repressing memories of that hideous song.  I will NOT be playing any hippie music on my turntables!

ES: Oh, perhaps you’d like me to hijack your Dusty Vinyl Archive feature with another countdown of my favorite songs…

SCRATCHY: Alright, just THIS ONCE….

ES: Ah, that makes me want to let my hair down.  Now, did you know that the astrological ages come from the position of the sun in the zodiac on the vernal equinox?

SHADOW: Indeed!  And precession of the equinoxes will cause the sun’s position on any given day to rotate through the entire celestial equator approximately every 25,772 years!  When the zodiac was first created 2,000 years ago, the spring equinox was very near the cusp between Pisces and Aries, which is why the latter is considered to be the first sign of the western zodiac.  And despite the singing of people under the influence of mind altering drugs, we are currently in the Age of Pisces!

RAINY: That’s wrong!  If this is the dawning of the Age of Aquarius, then it must be here by now!  That’s when it will finally rain and I’ll realize my true calling as a water bearer!

SHADOW: Now now, the Age of Aquarius is actually nigh!  Don’t give up hope, poor parched skunk.

RAINY: I hope so!  I know it will bring rain to my precious rain gauge!  Maybe in a few years…

RAINY: That’s not NIGH!

SHADOW: Well, I do have an extended lifespan, so for me…

RAINY: You know what, I’m about tired of all of the self glorifying “knowledge” you impart on us insignificant ones!  So if the Age of Pisces is really going to continue on for another 700 years, then I guess you won’t mind smelling like a couple of dead fish then!

Rainy and her empty gauge stomp off like a bull in the Age of Taurus. 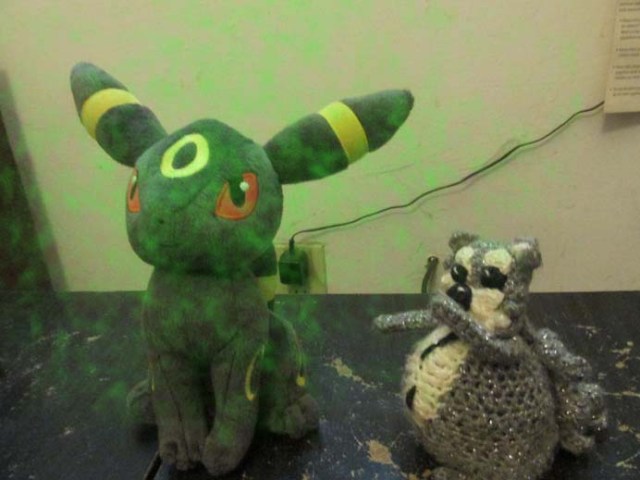 ES: (Holding nose) That was real smooth there, Einstein.  The problem with knowledge is that some people would rather you keep it to yourself if it doesn’t appeal to them.

SHADOW: I’ve had about enough of the ignorance of you distasteful Shelf critters!  I better not still smell like this when I emerge on the other side of my wormhole.  Farewell, squirrel! 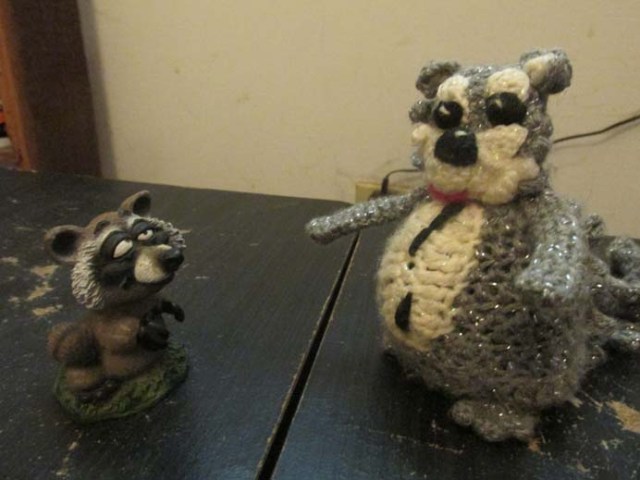 ES: Not your kind of skunkweed, Fuzzy.  Me and Shadow were just talking about all of the fascinating things I learned while I was away from work for the past few days…

ES: All the amazing facts I picked up while browsing the internet!  Did you know that the Arctic Circle is slowly creeping north due to the shifting axial tilt?

FUZZYWIG: I hope I’m not too late.  You, my friend, need an intervention.

FUZZYWIG: Just puff on that for a while, and you’ll soon realize the error of your ways about how you wasted five days worth of 4:20’s trying to learn useless science.

ES: But there were many interesting things after the Big Bang…. 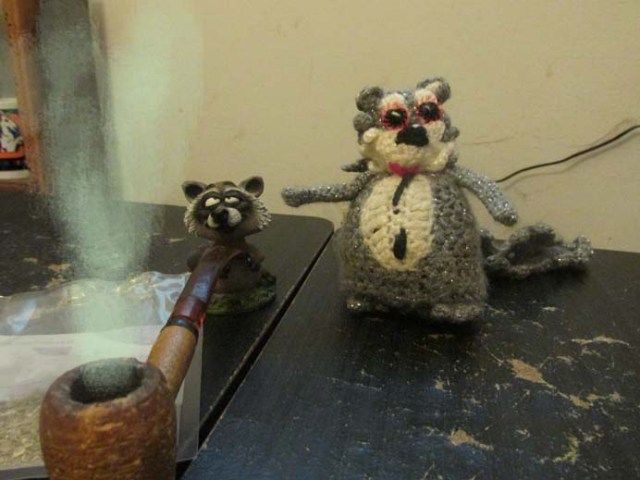 ES: Wow, I have seen the light!  Now I’ll have to ask for another vacay.

FUZZYWIG: You have become enlightened in the science of MARIHUANA!  Don’t bogart the truth, dude…