SANTA: It’s time for your annual performance evaluation, Seymour.  I’m afraid this won’t paint you in a very favorable light given all of the complaints I’ve received about you from parents.

SEYMOUR: But Santa!  I’ve always been a very good elf on the shelf!  I only snitch to you on the really rotten children!

SANTA: This has nothing to do with your ethics, Seymour.  You look fucking creepy doing your job, and more than one mother has said she wants to run your sick ass through the paper shredder!  Try to be a little less conspicuous while spying on the rugrats, and quit watching the women dress!

SEYMOUR: No offense, sir, but you slide down people’s chimneys, prowl around their homes and eat their milk and cookies.  Your job is pretty creepy too!

SANTA: Yep, I’m definitely not going to give you a raise again…. for the 74th straight year. 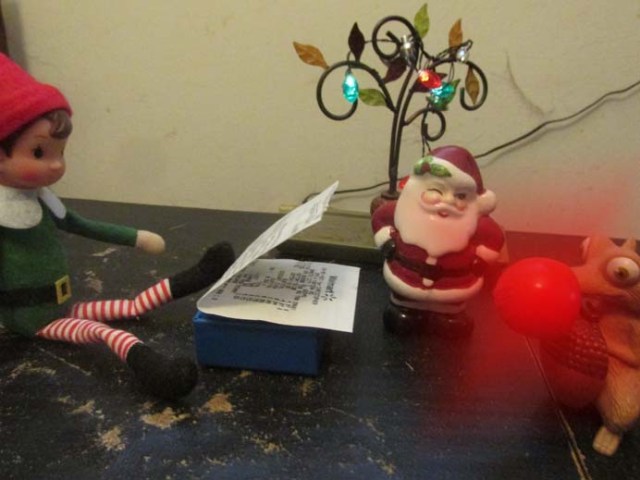 SANTA: I’ve already evaluated your annoying ass and decided to terminat…. I mean, reassign you.  Report to the slaughterhouse immediately and look for the big bear with the hatchet.  Meanwhile, I’ll do my underappreciated job and read another fan letter…

SANTA: Damn materialistic bitch!  You’re worse than those seven year old brats who sit on my lap and use my beard as a Kleenex!  Since I’m in such a jolly fucking mood, I’ll make your wish come true…

Sparklepony runs out into the snow.

SPIDER: Hey, come back!  I’m supposed to make you a silk purse!  All you gotta do is let me sit in your hand while I spin it…

Bored former 30-something who has nothing better to do with his life than draw cartoon squirrels.
View all posts by evilsquirrel13 →
This entry was posted in Advent Calendars and tagged christmas, elf, gift, purse, santa, sparklepony, tree. Bookmark the permalink.

20 Responses to Letters To Santa – Day 8