SANTA: Awwww, and I love you too, dear.  Come and give Santa another smoochie…

SEYMOUR: Santa!!!  Are you drunk again?

SANTA: Dammit, Seymour!  Can’t you see me and the missus are spending some quality time here?  And yes, I’ve been drinking.  The hard stuff is the only way I can stay warm in this fucking igloo!

SEYMOUR: I only asked, Santa, because you’ve spent the last half hour making out with a reindeer…

SANTA: Fuck!  And I thought maybe Mrs. Claus just found a way to cure her halitosis.  Seymour!  Forget you ever (HIC!) saw this!  And delete those photos you took on your phone, or you’ll be shoveling reindeer shit until next Christmas!!!  I better drown my (HIC!) sorrows in another letter…

SANTA: What do you think I’m running here, fucking GrubHub?  Alright, I’ll feed your mangy ass.  I always have plenty of these on hand anyway…

SAGE: Good morning, everyone.  I’m Sage Skunk here with the legal disclaimer for this post!  Evil Squirrel’s Nest (hereafter referred to as “The Nest”), it’s management, employees, affiliates, and mental health care workers do not condone feeding your dog chocolate bars.  Feeding a dog chocolate may have fatal consequences for you beloved pet.  Fleabag and the rest of the staff here at Shelf Critter Theatre, a licensed subsidiary of The Nest, are all trained professionals performing their own stunts solely for the entertainment of our alleged audience.  Please do not attempt anything you see on this blog at home.  The Nest is not responsible or in any way liable for any damage, either physical or mental, which occurs to your animal should you not heed this advice.  I am not an attorney, and I’m too cute to play one on this blog.  Now that we can’t have our asses sued off, this disclaimer is finished! 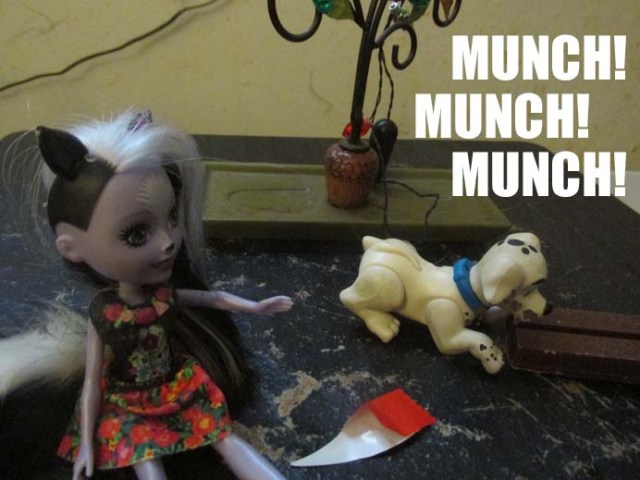 SAGE: You can stop eating the chocolate now, puppy. 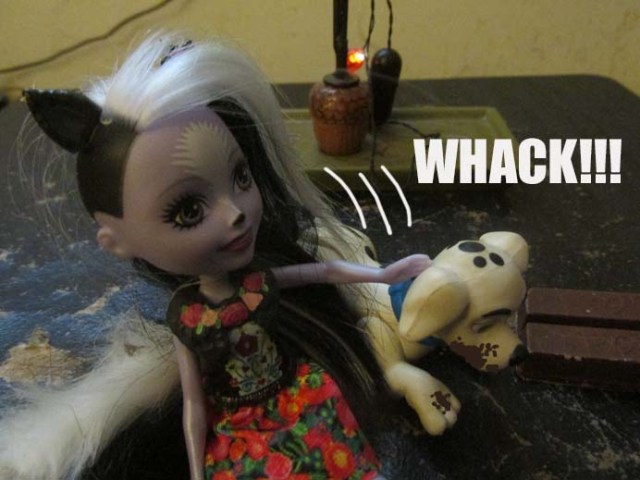 SAGE: Oh, and no animals were harmed in the production of this post!

Bored former 30-something who has nothing better to do with his life than draw cartoon squirrels.
View all posts by evilsquirrel13 →
This entry was posted in Advent Calendars and tagged christmas, dog, elf, fleabag, gift, sage, santa, tree. Bookmark the permalink.

10 Responses to Letters To Santa – Day 9