SANTA: Alright, the sleigh’s loaded up with all this useless shit I had to buy at Mecca because my elves can’t figure out the Chinese pictogram instructions to assemble anything!  Let’s get this road on the show!  The faster I get done, the faster I can send selfies of myself in a speedo from Costa Rica to Draliman!

SANTA: No, I’m not delivering that Waffle House gift card to your mom while on official Christmas business!  How many times have I told you….

SEYMOUR: No Santa, this is one last letter that just came in under the wire!  Please sir, you don’t want to spoil some poor critter’s wish, do you?

SANTA: Seymour, have you paid one bit of fucking attention to this series?  Oh, kiss Blitzen’s ass under the mistletoe!  Let me have the damned thing!!!

SANTA: Aw fuck!  I should have known it’d be this greedy bitch!!!

SANTA: Your aunt shouldn’t let you leave the neighborhood, let alone wander up to the polar icecap.

TINA: Santa, I have this awful theory that you take my modest twenty foot long lists I make up each year and just throw them into your furnace.  Well, I had a VERY SPECIAL wish for this year, so I wanted to make sure my demands got the attention they deserve from the Big Guy!

SANTA: If you think I won’t shitcan that list of yours in front of you, then you’ve underestimated….

TINA: Santa!  All I want for Christmas is….. (opens her list up)

SANTA: Who are you, and what have you done with greedy Tina?

TINA: Come on, Santa!  Be a pal and make the world a better place for my generation to get lost on their smartphones in!

SANTA: Peace on earth, huh?  Well fuck, I guess there’s only one thing I can do then…. 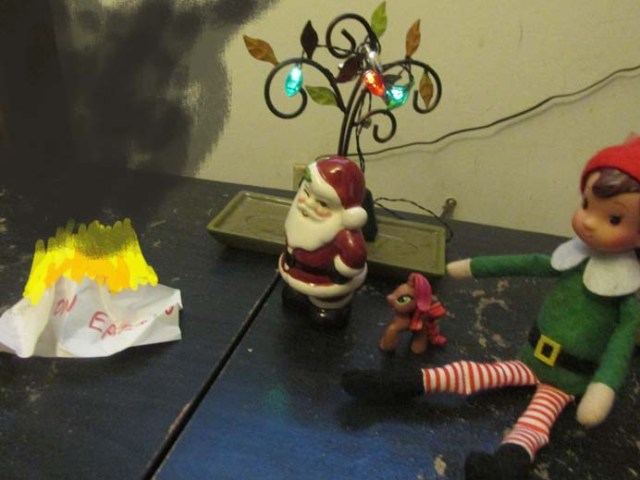 SANTA: I ain’t no fucking miracle worker!  And I don’t have time for the naive wishes of eight year old unicornlets who still believe in fairy tales!

TINA: S’alright, Santa!  I knew you’d do that!  Now everyone out there reading this knows how big of an asshole you really are to little critters!  So if you want to redeem yourself before all the parents with their pitchforks and torches make it up here (reaches in her Frozen backpack and unfolds a monstrosity)…. 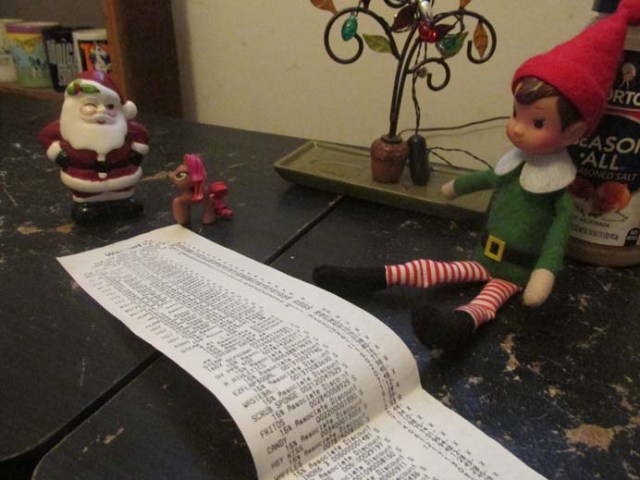 TINA: …you better get to work on my REAL wish list!!!!  And Captain Planet would be happy to know that “Peace on Earth” is still 963rd on the list between a Shadow the Umbreon See N Say and a new fat Barbie!

SEYMOUR: Tina’s right, Santa!  We better make sure we fulfill every wish on this list this year so your reputation doesn’t go in the toilet.

SANTA: Do you know how long it’ll take to get all this shit!?!?!

SEYMOUR: Don’t worry, Santa.  I’ll have Benny make the arrangement to postpone your Costa Rica trip until March while we take care of this.  Together we’ll make this the best Christmas ever!!!

SANTA: Fuck you, Seymour!  Fuck all of you!  How did I get roped into this shitty ass job anyway….

Bored former 30-something who has nothing better to do with his life than draw cartoon squirrels.
View all posts by evilsquirrel13 →
This entry was posted in Advent Calendars and tagged christmas, elf, gift, list, santa, tina, tree. Bookmark the permalink.