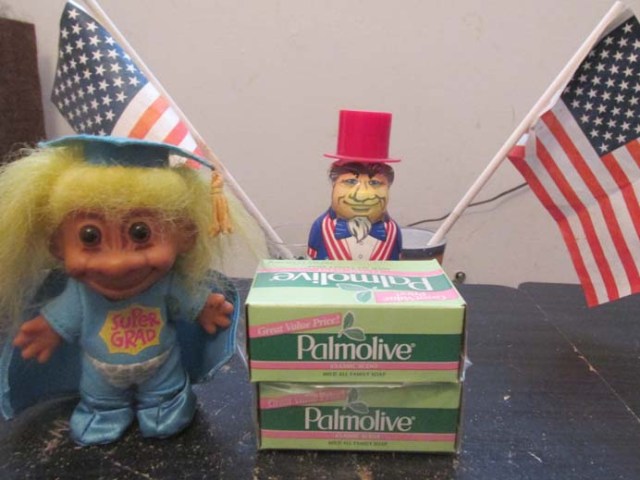 UNCLE SAM: Good morning, citizens!  This is your Shelf President Uncle Sam interrupting that stupid daytime talk show you’re watching with a very important message for all of you peasants out there.

TROLL: At least this isn’t pre-empting Paw Patrol!  That’s my favorite cartoon!  I got such a mad crush on Skye….

SAM: Since today is Troll’s Day…

SAM: Like I said, today is Troll’s Day.  And in honor of this glorious occasion, I have issued an executive order dictating that this week’s Share Your World questions will be answered by the great critters of this Shelf!

TROLL: Oh boy!  Do I need to change out of my jammies for this?

SAM: My brilliant idea is going to make this Shelf great again!

TROLL: Sir… wasn’t that the tagline of the previous administration?

SAM: It sounds like one of my interns wants to spend the weekend hanging upside down by his nutsack in Guantanamo Bay again….

TROLL: Oh please sir, no!  I’m still purple down there from the last time!

SAM: Wonderful!  Let’s get this World Sharing over with so I can go back to hogging it all for myself again.  Questions provided, as always, by Melanie… 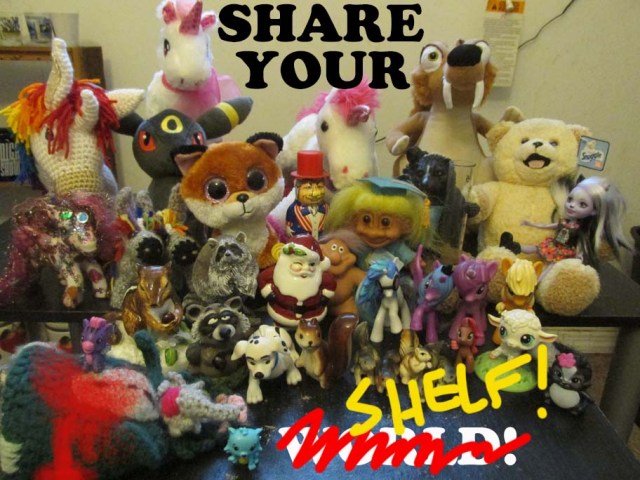 SHADOW: What is…. knowledge?  What kind of an asinine query is that?  It figures most lowly humans don’t even know what knowledge is.  If any of you even had a minuscule amount of the vast intelligence I possess, you wouldn’t be asking such basic and banal questions about one of the most fundamental elements of existence itself!  A superior being such as myself would never stoop to…

TINA: Hey Einstein!  Instead of avoiding the question, why don’t you answer it for us lowly critters?  Just what IS knowledge, egghead?

TINA: OMG!  “Stuff you learn!?!?”  If I totally put that on one of my third grade assignments, I’d get a D-minus and get sent to the principal’s office!  That’s the dumbest answer I’ve ever heard!  I’d expect better from such a vastly superior dork as yourself!

SHADOW: I don’t have the time nor the patience to be teased by some juvenile little schoolgirl…

TINA: I haven’t even started teasing you yet, big boy! 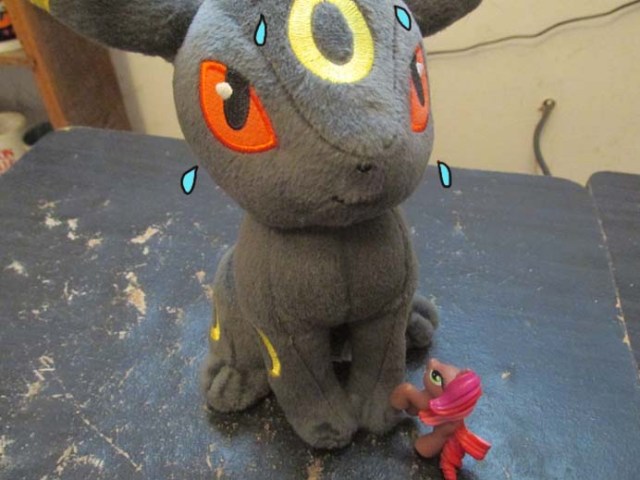 TINA: (Giving Shadow a better view of her Elsa Underoos) Cuties like me just totally heart nerds like you!  Maybe you can teach me some knowledge about…. you know… OTHER stuff I can learn?  How are those Pokeballs of yours holding up there, cutie pie? 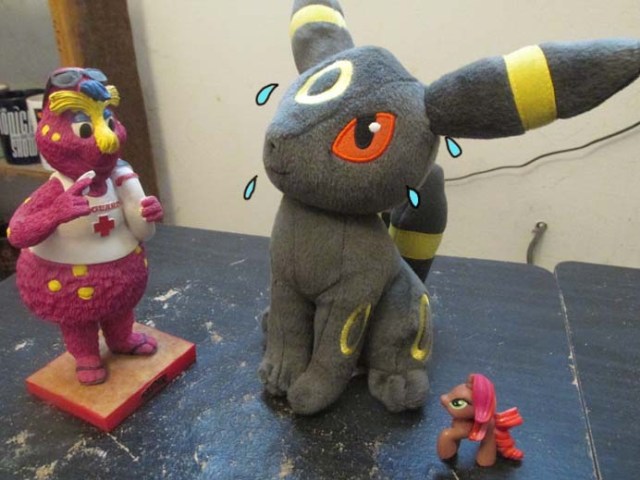 TINA: Nothing officer!  This older critter was just going to take me behind the bleachers and teach me some knowledge from a book called the Kama Sutra!

SLIDER: Yeah, save it for the gang members in prison who love assraping pedos like yourself.  You’re coming with me, creep!

The vastly intelligent Umbreon is tased, cuffed, and led off to a life in prison… where he will have plenty of time to learn what real knowledge is while he’s tossing salads.

How do you define consciousness (self awareness)? 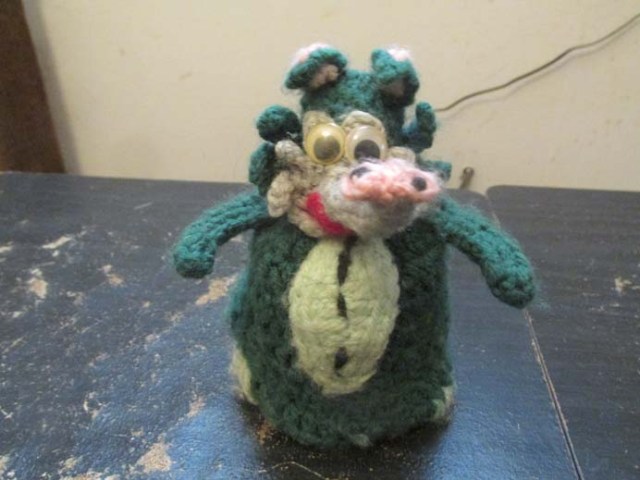 BUSTER: The ability to interact in a mental and physical way with the world around you!  Consciousness is knowing of your existence and the very fact that you’re ALIVE!

Is it possible to prove that other people besides yourself have consciousness? 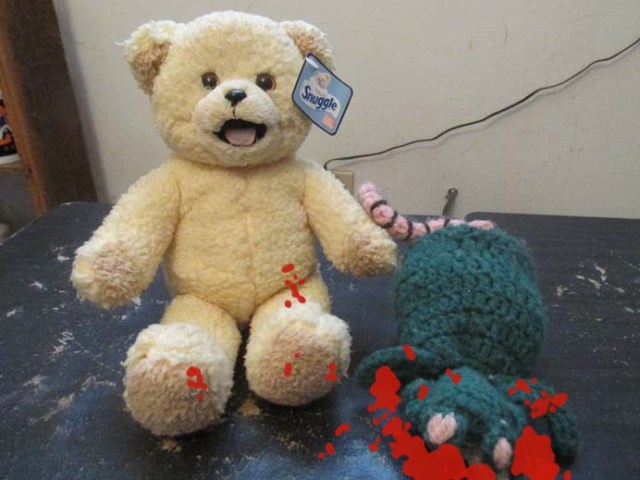 SNUGGLE: Sure it is!  See this possum carcass here?  He definitely doesn’t have consciousness!  I’mma prove it to you now….

SNUGGLE: See, he’d deader than a doornail!  No consciousness at all!  Just another tasty item on Hung Lo’s Chinese buffet!

SNUGGLE: What do you want, dude?  We already know you don’t have consciousness either!  You’re just an empty husk dressed up in orange fur and creepy eyes!

Would you be able to tell if time had been altered in some way?

FUZZYWIG: Huh?  Could you repeat the question?  You see, I was a little preoccupied getting my materials together for my favorite time of the day….

FUZZYWIG: All of that jumping better not be more fleas from my stupid dog, or he’ll be chop suey by tomorrow… 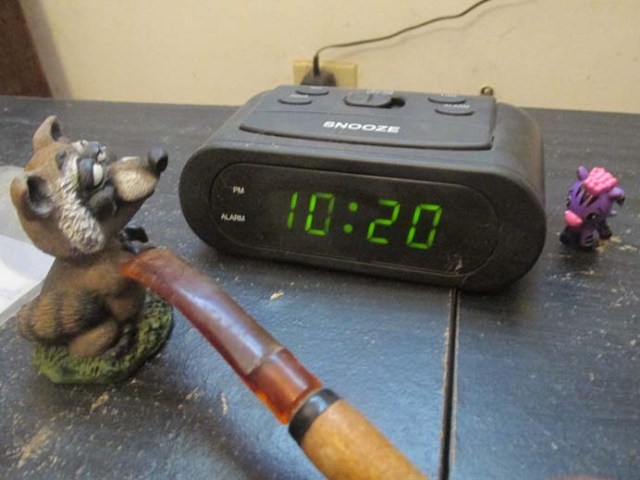 FUZZYWIG: What’s the meaning of this!?!?  I know it was just 4:20!  I haven’t even started smoking yet, so I couldn’t have passed out.  Someone’s been altering time!  Or maybe it’s that LSD I tried at that party back in 1971?  Dammit, now I gotta wait until tomorrow for my daily medicine…. 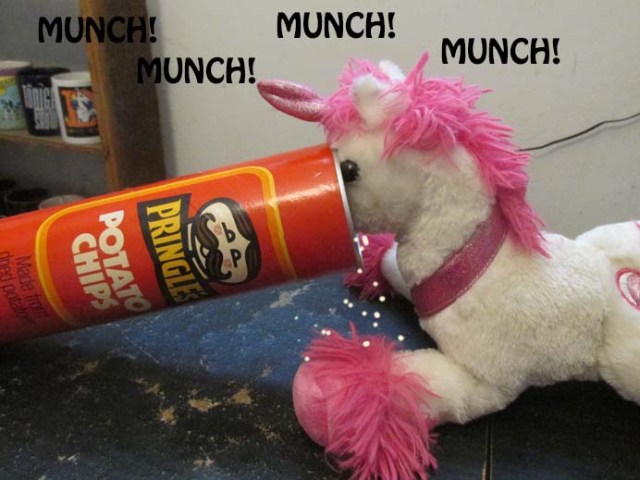 MITZI: (Talking with her mouth full…. of something different this time): Mitzi, like, totally luvs tater chips!!!  Just like when Mitzi’s in the football team’s locker room, Mitzi can’t eat just one!!!

FUZZYWIG: I’ll pass, thank you.  I don’t have the munchies today for some reason.  I must have done the time warp again…

RAINY: What is there to celebrate about Spring?  It’s just as awful and depressing as all of the other seasons.  There are never any April showers on this Shelf!!!! 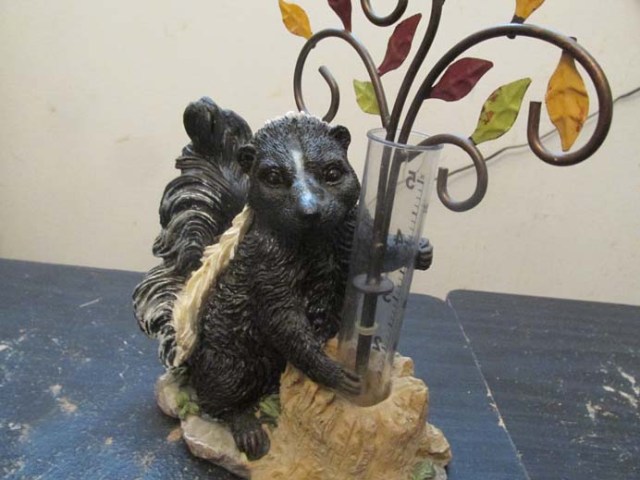 RAINY: This is NOT a flower, and get it out of my precious rain gauge before it grows roots!!!  You think this is funny, taunting a pluviophile such as myself who never gets to enjoy a Spring rain!!!  You know what I think about Spring…..???

No, Rainy!  Not so close to Earth Day!  There go the Spring blooms….

MEANWHILE, ON THE OTHER SIDE OF THE SHELF….

JIM BOB: Wow, I’m not used to the leaves fallin’ in April!

CLETUS: I reckon it’s ’cause we went too far south trying to get back to The South!

HANK: We’re definitely in that thar Southern Hemi Sphere!  I saw the water in the outhouse spinnin’ the other way when I flushed!

JIM BOB: Does that mean it’s Spring back  on the farm in Alabammy?

JIM BOB: You lucky son of a gun!  Who’s the lucky critter?

HANK: A cute little Tasmanian devil I saw eatin’ a dead possum on the side of the road!

JIM BOB: Those tazzies are mean!  She’ll tear you up!

Bored former 30-something who has nothing better to do with his life than draw cartoon squirrels.
View all posts by evilsquirrel13 →
This entry was posted in Share Your World and tagged answers, questions, Share Your World, Shelf Critter Theatre. Bookmark the permalink.