It’s time to take the lid off of the giant tampon box full of images that litter the internet and choose one to write something completely fucked up about.  Welcome to another semi-regular Wednesday edition of Random Image Inspiration!  Whatever shall the Randomator offer up in pixelated fodder this time?

The 4th post in my Reader was this one by Melanie (Click it!  You know you want to read about Lamias…) 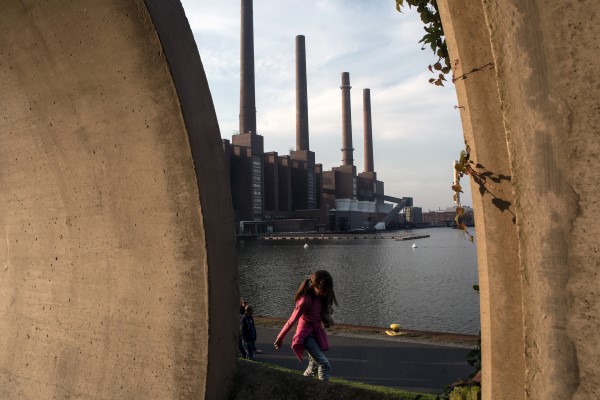 “That’s a pretty huge factory, Dave.  No wonder your town is so dirty and the air so (cough!) nasty.”

“Seems like an ironic name for such a blight on the landscape.  What does it produce?”

“You have a giant plant in town and don’t know what they make there?”

“Nobody knows, Bob.  It’s some kind of government secret and only their men work there.  All we know is that when the smokestacks are belching out a steady stream of black plumes, the next day a bunch of trucks will be lined up at the end of that chute over there to load up on whatever comes out.”

“Seems awfully fishy to me.  I’ll bet this lake used to be beautiful before the industry showed up.  My sister’s an environmental activist, and I’ll bet her group would be all over this place…”

“Oh, we get lots of activists who come to town to try and get New Green shut down.  In fact, they had a huge rally in front of the gates just the other day.  Hundreds of people with megaphones and signs demanding it be closed and turned into a park.”

“Good for them, I say!  Maybe one day they’ll listen and turn your town into a livable place again.”

“I doubt it.  Usually right after one of those big environmental protests, New Green cranks up production even higher than normal.  Almost like they’re mocking them.”

“What balls!  I should alert my sister’s bunch to this.  They’ll join forces and really put the pressure on those filth barons!”

“I don’t think the group’s in town anymore.  The gates have been quiet the last two days again.  The out of towners are always gone the next day.”

“Well, that’s slacktivism if I’ve ever seen it!  What cowards!  One little rally, and they get back in their SUV’s and go home like they actually made a difference.  I’m calling my sis about this right now!  Her bunch’ll show these green hipsters how to get some action!”

“Hello, Susie?  Bob here!  Say, you know that giant factory down in Pleasant Valley?  Yeah, that’s the name of it, New Green!  This thing’s almost singlehandedly killing off the earth!  You think your group’d like to come down and…… what?  You guys won’t come near this place?  Disappearances?  What do you mean the activists who come to this town always disappear?”

“What is it, Princess?  Did you have fun watching the dump?”

“It was SO COOL, Daddy!!!  About a jillion trucks showed up today to get dumped in!!!”

(To Bob) “The things that kids find to be entertaining!”

“And Daddy!  One of the New Green trucks had an extra word on its trailer where it’s usually all painted over!!!”

“Daddy!  What does the word “Soylent” mean?”

Bored former 30-something who has nothing better to do with his life than draw cartoon squirrels.
View all posts by evilsquirrel13 →
This entry was posted in Random Image Inspiration and tagged environment, factory, image, inspiration, random, story, what a twist. Bookmark the permalink.

16 Responses to The New Green